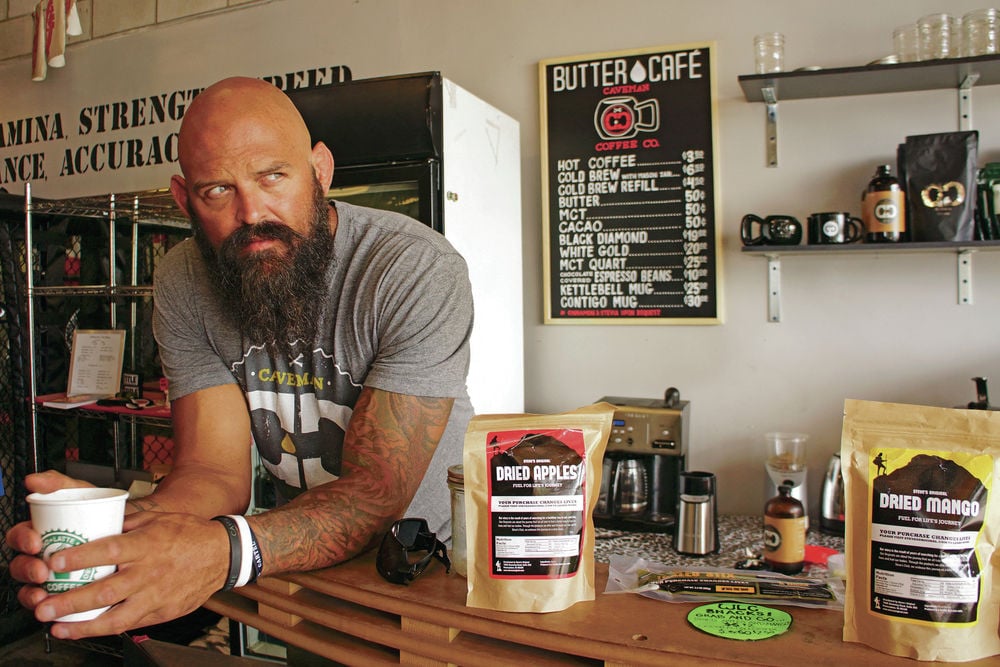 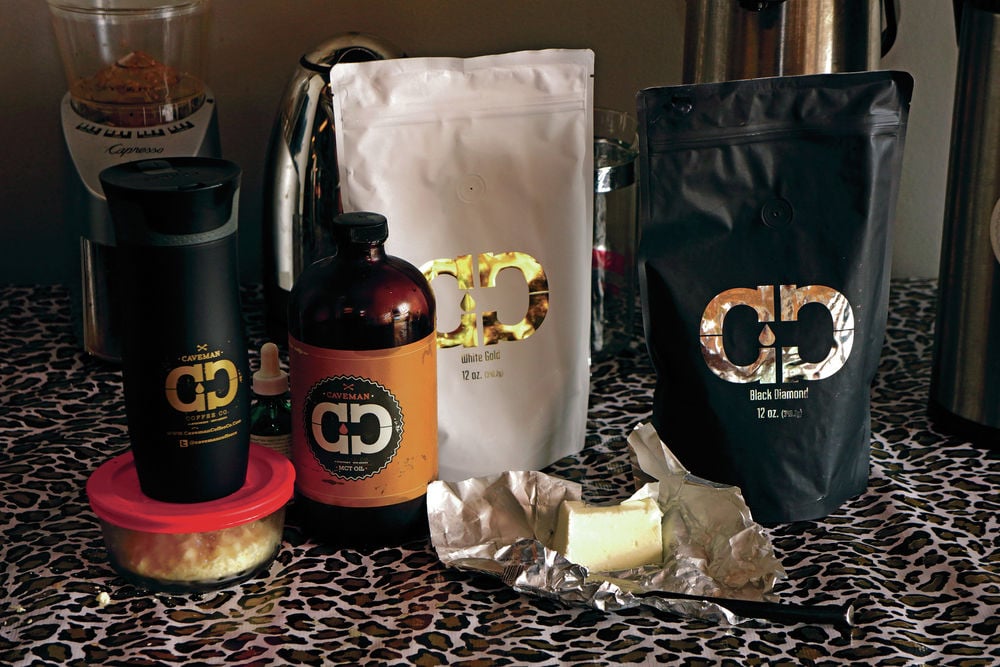 Butter coffee is made with three key ingredients: brewed coffee, grass-fed goat or cow butter, and MCT oil, a kind of large molecule oil that was once vilified by the medical establishment, but which is now considered to be a healthful fat. Luke E. Montavon/The New Mexican 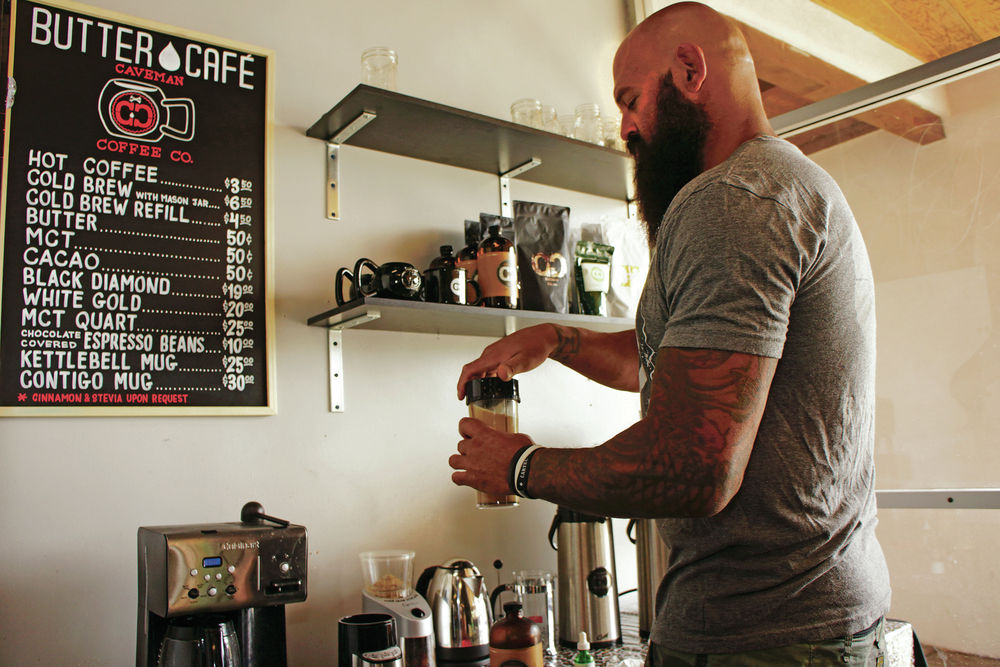 Undisputed Fitness owner Tait Fletcher prepares butter coffee Monday inside the gym. Fletcher prepares his brew by combining hot coffee with a tablespoon-ish of butter and a splash of MCT oil (medium chain trigylceride) in a blender. The whipped result is frothy, mild and surprisingly light in texture. Luke E. Montavon/The New Mexican

Butter coffee is made with three key ingredients: brewed coffee, grass-fed goat or cow butter, and MCT oil, a kind of large molecule oil that was once vilified by the medical establishment, but which is now considered to be a healthful fat. Luke E. Montavon/The New Mexican

Undisputed Fitness owner Tait Fletcher prepares butter coffee Monday inside the gym. Fletcher prepares his brew by combining hot coffee with a tablespoon-ish of butter and a splash of MCT oil (medium chain trigylceride) in a blender. The whipped result is frothy, mild and surprisingly light in texture. Luke E. Montavon/The New Mexican

Coffee is more than a beverage. It’s an elixir, a necessity, a philosophy. When we step up to the bar, we have a plethora of choices: Do we want the simpleness of the brewed cup? Do we crave the exact frothiness of an espresso drink with our favorite milk? Can we wait for the pour-over?

Now, several high-end coffee shops in Santa Fe have added another concept to their menu: butter coffee. While the idea of adding butter to coffee seems at first hedonistic, an over-the-top concession to a food porn-addicted culture that puts bacon on doughnuts, it is quite the opposite.

Butter coffee, according to its devotees, may be one of the keys to optimum health. The drink is associated with careful nutrition and vigorous exercise, and its growing presence in Santa Fe emanates out of an unlikely place — a crossfit gym.

Tait Fletcher is a nutrition pirate, an ex-UFC fighter with slew of tattoos and a Game of Thrones beard. He’s also an entrepreneur, stuntman, bar owner, physical trainer and actor (you may remember him as white supremacist “Lester” on Breaking Bad). His studio, Undisputed Fitness, is a crossfit/martial arts gym at the Solana Center with a cult following. It’s all-business, a crossfit box with massive clanking metal equipment, a no-nonsense fighting mat and intimidatingly chiseled people walking around in T-shirts from jiu jitsu tournaments they probably won.

And just inside the door is a cute little makeshift coffee bar, where the gym staff prepares butter coffee for patrons and anyone else who either wants to try it or has already adopted it as an important part of their daily regime.

Fletcher prepares his brew by combining hot coffee with a tablespoon-ish of butter and a splash of MCT oil (medium chain trigylceride) in a blender. The whipped result is frothy, mild and surprisingly light in texture. He never bothers to actually weigh the ingredients, but he estimates that the proportions come out to about a tablespoon each of butter and MCT oil per cup.

MCT oil, Fletcher explains, is derived from either palm or coconut oil. Without getting too technical, he says MCT is a kind of large molecule oil that was once vilified by the medical establishment, but which is now considered to be a healthful fat. Caveman Coffee derives its MCT from coconut oil.

“Coconut oil has a molecular structure that’s thick and will harden at room temperature,” Fletcher says. “MCT oil has a smaller molecular structure, it can be assimilated by the body easier, and it stays a liquid, is more bioavailable. Ours also has boric acid in it, which is one of the larger molecular chains in coconut oil that often in MCT gets filtered out because of its size.”

The oil, whichever you use, is combined with grass-fed butter (generally Kerrygold brand, but Fletcher uses goat butter) in a blender and emulsified into a creamy texture. It can be served hot or cold over ice, although when drinking it cold, Fletcher suggests to finish it before the butter begins to solidify.

First-timers should tiptoe slowly into drinking butter coffee, however, as MCT oil can be tough to digest for those who aren’t used to it. Devotees explain that this effect goes away once the body acclimatizes to it, but overdoing it initially can lead to an uncomfortable afternoon.

The basic idea behind butter coffee is simple: When combined with a diet low in carbs and high in good fats and proteins, the butter/oil coffee is said to help teach your body to burn fat for fuel.

Fletcher, who has experimented with every high-performance diet from Zone to true Paleo, backs this claim up with personal experience. Fletcher initially started drinking butter coffee on a movie set, and he noticed the results in his own body.

“I gained seven-eight pounds, but was super lean, dense and fast,” he says.

And while the concept of putting butter in coffee might be alarming to people conditioned to believe that half-and-half would kill them, he says, “There’s a difference between fat the nutrient and fat the adipose tissue. It’s a misnomer, most people go by it.”

Fletcher was a coffee enthusiast before launching his own roast. Beans under the Caveman Coffee label are roasted by Albuquerque roasting company Villa Myriam, and are selected for how well they paired with butter and MCT oil.

“Dave’s a master roaster — what sommeliers are to wine. Dave is a roaster beyond compare,” Fletcher says of David Certain, the roaster for Villa Myriam.

Caveman Coffee comes in two flavors: “White Gold,” a light roast finished before the first beans crack, and “Black Diamond,” a darker roast for those who prefer more robust flavor. Both are available online on the Caveman Coffee website, along with the brand’s own MCT oil.

Buttered coffee was originally developed by biohacker David Asprey, tech nerd and founder of a company called The Bulletproof Executive, which defines a system of diet, exercise and habits that are designed to optimize the human mind and body. The coffee, apparently, is a big part of this endeavor. Fletcher knows Asprey personally, though the two have a touchy relationship at this point.

You can also get butter coffee at Iconik and Ohori’s, but some people order it without much thought to how it fits into their lifestyle, Fletcher says.

“A lot of people don’t know what it is, and they drink it every day,” says Iconik barista Miranda Scott, shrugging. “They just order it because it sounds unique. We sell a lot of it, maybe 20 a day … but when you have your Bulletproof [coffee] with your bagel … that’s sort of beside the point.”

Soon, Undisputed Fitness will get as serious about its butter coffee as it is about training: In September, the whole gym will move to a new space in the old Santa Fe Mountain Sports location off Baca Street, where it will expand the coffee bar.

Fletcher is glad to see the trend growing. “People think it’s crazy at first, and now it’s nice to see oh, OK, it’s happening,” he says, smiling and sipping from his glass jar. “I don’t care about having a business. I care about empowering people and leading people to a different consciousness and being accountable to yourself and your food, what you take into your body.”

Thanks for sharing such a useful article,

I'm against using any medicines or natural substances as there are a lot of dangerous things on the market these days but Stop fat Storage has been a Godsend for me. I am losing inches off my belly; my mood has improved, and my family has noticed the changes in me and it's only been 2 weeks! I've tried many other products, but none actually produce what i've experienced with this supplment. For those who wonder where to get it, here's the official store and i think they still offer discounts: http://stopfatstorage.review-more.info/

Yet more promotional nonsense and bilge.

Another pinnacle or reporting from the New Mexican. Most journalists would have reached out to an expert in the field of nutrition, someone with a degree (not a nutritionist which is a quack moniker but a Registered Dietitian or Dietetic Technician) and some certification to further explain MCT's instead of just taking the word of the proponent and person selling it who to his credit has a degree in reading. You can read a lot on the internet but getting a true professionals opinion would have been better.

If the New Mexican wonders why revenue for them is down - need look no further than their own articles. I won't pay for a newpaper written at an 8th grade level.