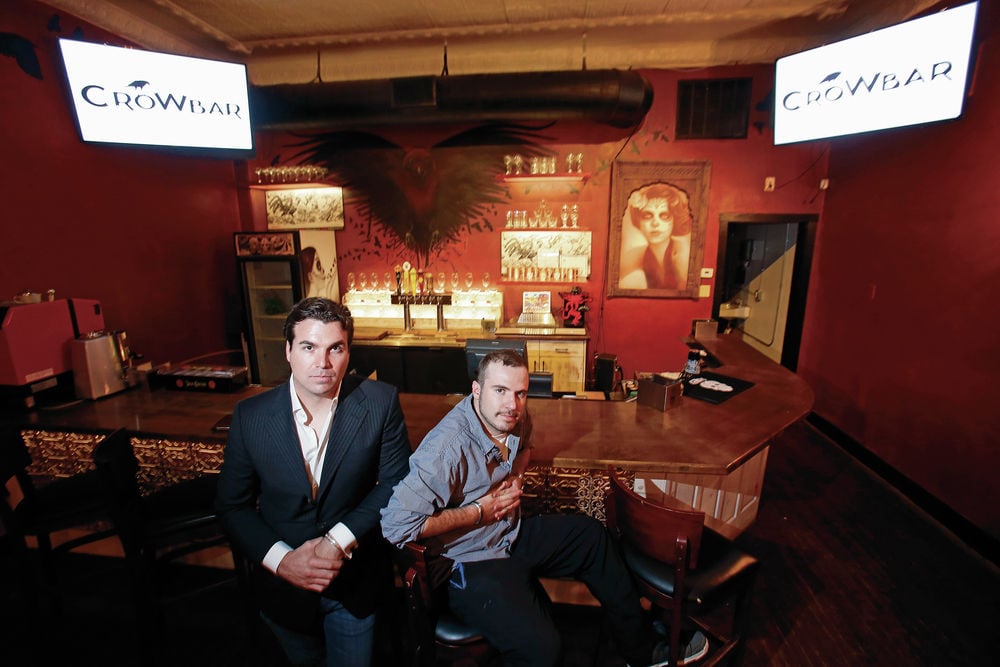 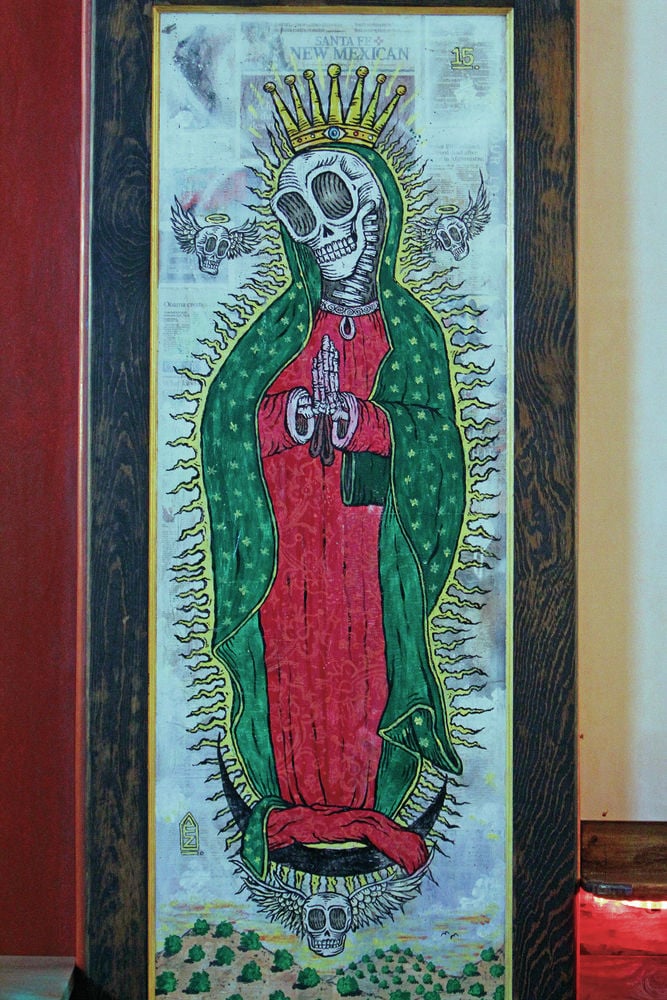 Day of the Dead art at Crowbar. The art on the walls is all local and for sale, and all the tabletops are individualized and decorated by local artists as well. ‘We want as much local art, as much local beer, as many local spirits as we can do,’ Cassidy says. 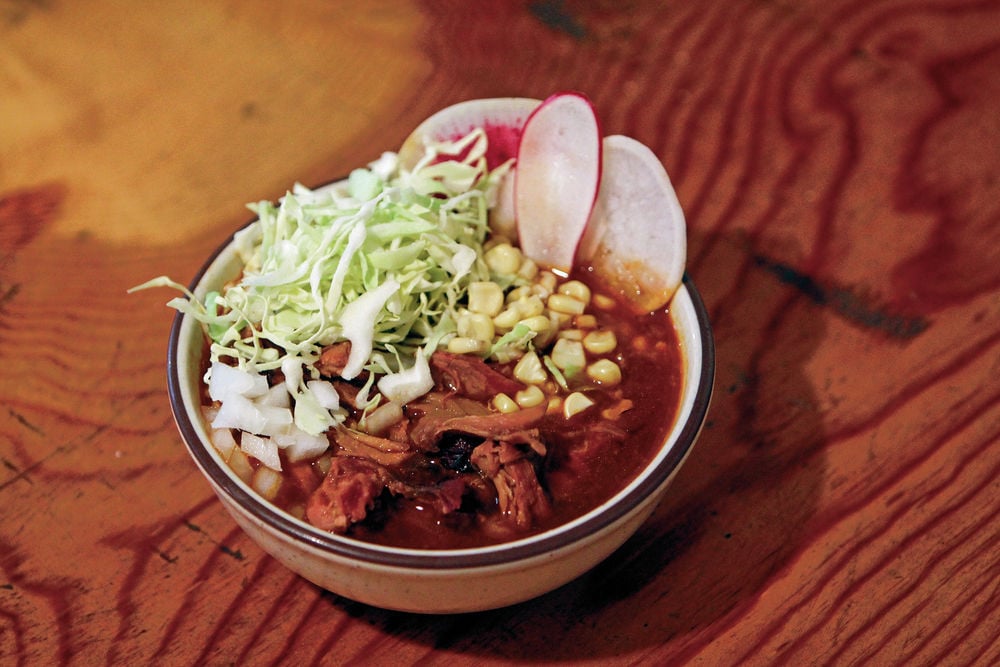 Pork and red chile posole at Crowbar. The bar’s menu will be small and decidedly local, according to the owners. ‘It’s going to be bar food, but built with quality, grass-fed beef, local farms, organic, non-GMO, all that stuff, Cassidy said. 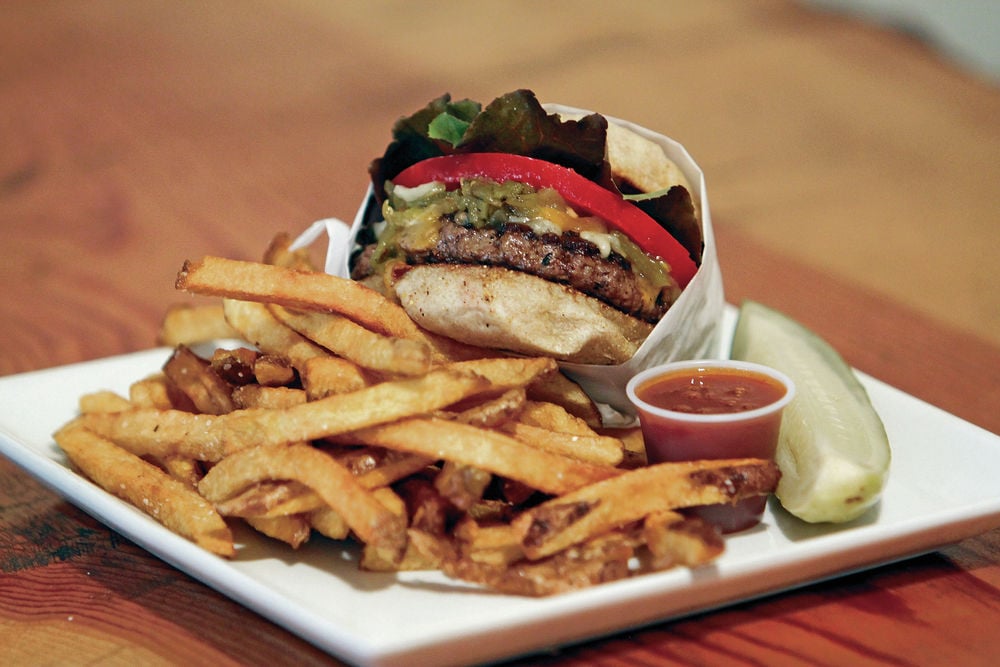 Day of the Dead art at Crowbar. The art on the walls is all local and for sale, and all the tabletops are individualized and decorated by local artists as well. ‘We want as much local art, as much local beer, as many local spirits as we can do,’ Cassidy says.

Pork and red chile posole at Crowbar. The bar’s menu will be small and decidedly local, according to the owners. ‘It’s going to be bar food, but built with quality, grass-fed beef, local farms, organic, non-GMO, all that stuff, Cassidy said.

The key to a successful bar might be not doing too much. That, at least, is the philosophy of Jason Capling and Rick Cassidy (also the owner of Beyond Waves, the skate shop on nearby Ortiz Street), who are about to open an establishment called Crowbar on the prime real estate at the corner of West San Francisco Street and Burro Alley.

Occupying half of the spot that once housed Burro Alley Cafe, Crowbar is small (it falls into the “long skinny bar” category) but has everything a bar patron would want in a tight package. It feels like a bar that’s been at that address for decades, as if archaeologists simply chiseled away the veneer of more modern establishments on top and found Crowbar waiting underneath. It has the air of always having existed, already lived-in and scuffed-up by generations of boots. Part of that is the actual floor, which the owners opted to leave as-is without any refinishing, but everything about it has an old Santa Fe patina, a hard-to-describe flavor that longtime locals will identify with — the rusted metal on the bar, the tin ceiling, the leather booths and the local norteño art that people are used to seeing around town. Plus, because of where it is, it has an appeal shared with many of Santa Fe’s old established bars: Patrons can have a beer while watching the street for their friends walking by.

Its Día de los Muertos theme comes off as understated and tasteful (and slightly hipster-ish, in a “put a bird on it” kind of way), with silhouettes of crows in flight sprayed across the back wall and on the back beer cooler, and a massive Game of Thrones-esque crow coming in to land, wings spread, dominating the back wall.

“In Mexican culture, people speak to the dead through crows,” Cassidy says.

There are no sugar skulls, no flags and no elaborate altars; just the beautifully faded tarnish of exposed brick and old wood. The theme is expressed primarily through the art on the walls, most of which is also disarmingly subtle, giving the impression of a bar with a dark aesthetic rather than a Southwestern theme park attraction. The art on the walls is all local and for sale, and all the tabletops are individualized and decorated by local artists as well, with distinctively New Mexican Day of the Dead faces and even a Zozobra painting watching you as you sip your beer.

But despite the gothic tone, the bar is intended to be put to best use during the day. Cassidy wants it to feel like a saloon, a bar in which locals can hang out to watch sports, play pool or have a conversation.

“I wanted to go somewhere where I can talk to someone, somewhere you can chit-chat with someone,” he says. Crowbar will be open from roughly noon until midnight Sunday through Wednesday, and noon until 2 a.m. Thursdays through Saturdays.

“We’re not trying to be a nightclub,” Cassidy says. “I’ve always found, especially in the bar business, that people like to bar hop. That’s why a lot of cities will have bar districts. When the space became available, that was the biggest thing for me. You kind of synergize with all the other bars in the area.” There are TVs at the bar for sports and there may be acoustic music at night, but what Capling and Cassidy want is, as Cassidy puts it, “a true watering hole where local patrons will be encouraged to stop and stay a while.”

And have a libation or two while they’re there, of course. The drinks themselves will be designed by Rick’s brother, Dustin Cassidy, a sommelier/mixologist, along the lines of a quasi-culinary cocktail program. The emphasis will be on tequilas and mescals, and craft cocktails with lots of muddled fresh ingredients.

“We want to make sure everything in our bar, whether it’s food or drink, is fresh,” Cassidy says. “We’re not doing any kind of mixes or any canned juices. It’s all fresh squeezed, fresh herbs.” There will be a small but select wine list of mostly Spanish varietals, and a few local beers on tap.

The menu (because of course there will be food) is also small, only about six to 10 items at a time prepared by chef Nathan Mayes, and like everything else at Crowbar, will be decidedly local.

“We’re trying to keep it real affordable, and we’re trying to have that feel-good hearty food — nachos, Frito pies, tacos, etc.,” Cassidy says. “It’s going to be bar food, but built with quality, grass-fed beef, local farms, organic, non-GMO, all that stuff.” Food will be about $8 to $15 a dish, and offerings will rotate with the seasons.

Crowbar will probably serve food until 10 p.m., but the owners are pondering the feasibility of reopening the kitchen on weekend nights after their drink service ends at 2 a.m., to service all the hungry souls spilling out into the streets. “With our kind of minimalistic menu, it’s going to be easy to get things going again,” explains Cassidy. Hopefully, for the sake of every hungry person who’s ever left a bar on that block and couldn’t find a food truck, they decide it’s worth the trouble.

Capling and Cassidy are both locals (Cassidy adds that he is an eighth-generation norteño on his mother’s side), and everything about Crowbar, from the food to the art to much of the clientele, will be homegrown.

Crowbar will throw a private sneak preview/art show on Halloween (sadly, already RSVP-ed to capacity) but will be open in a month or so, once Cassidy and Capling believe they’re prepared to open the doors.

The space has potential for expansion. There is a whole second half of the building just over the brick wall, as well as a patio with another bar in the back that has potential as a summer hangout that might inject some good-natured raucousness into often-quiet Burro Alley.

Cassidy and Capling are aware those options are there, but right now, Crowbar is a small enough operation that Cassidy and Capling and their crew can get everything dialed in right to make it exactly the bar Cassidy and his partners (and hopefully their future patrons, and possibly the ghosts of patrons past) have been wanting all this time.

Sounds great. I think these guys have a really good idea. I hope they will have plenty of Colorado and Oregon beer.