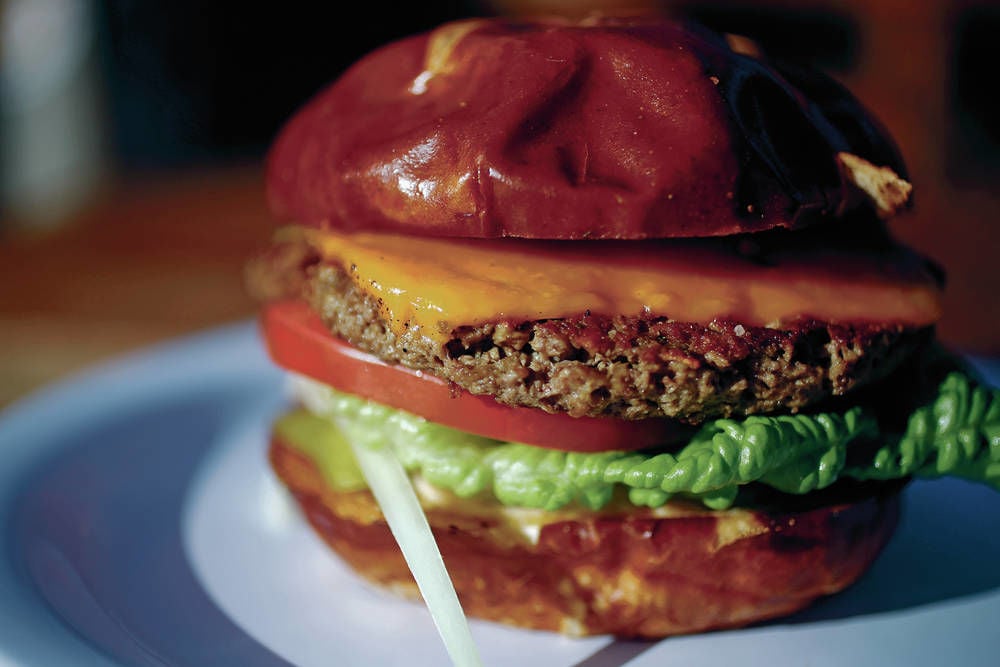 ABOVE: Root 66 serves the trendy and eco-friendly Impossible Burger — which looks, tastes and smells like beef but is made without animal products — with a nut-based cheese, pickles, lettuce, tomatoes, onions and special sauce. 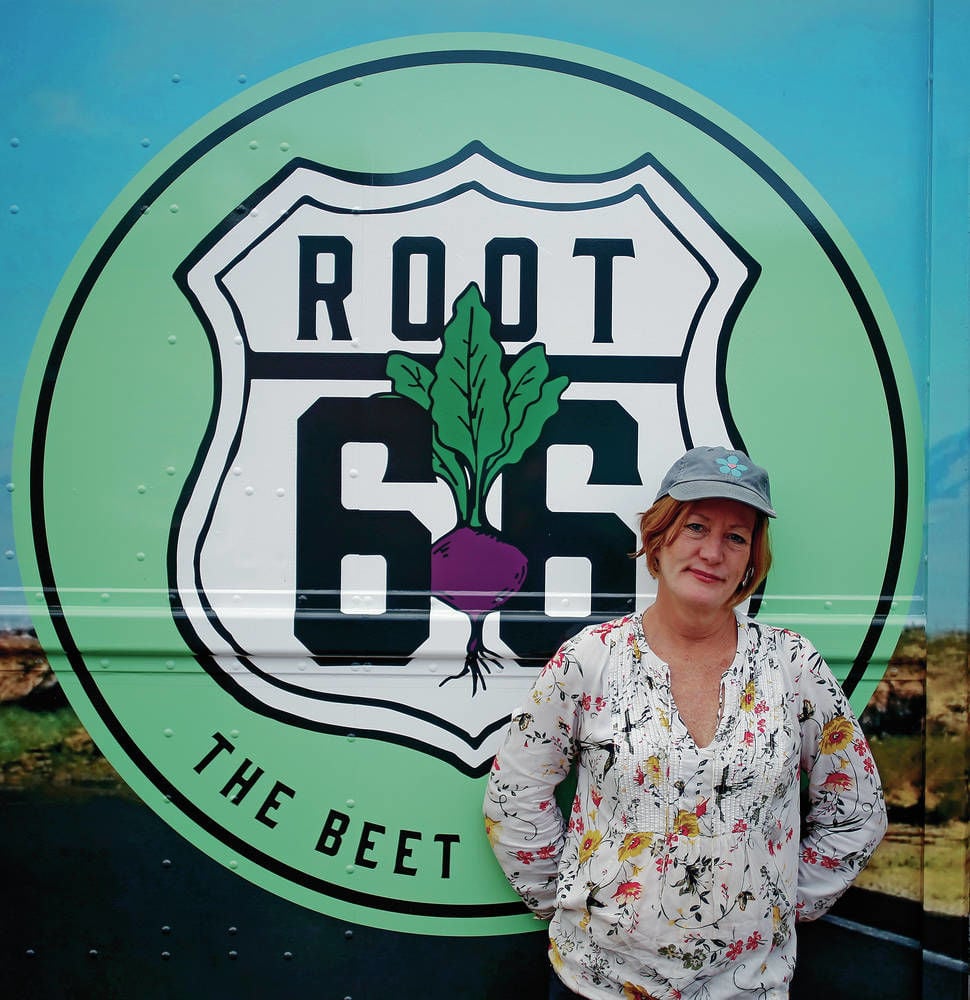 LEFT: Gail Patak, chef and co-owner of Root 66, has honed her vegan versions of classic dishes since becoming a vegan about 12 years ago.Photos by Luis Sánchez Saturno The New Mexican 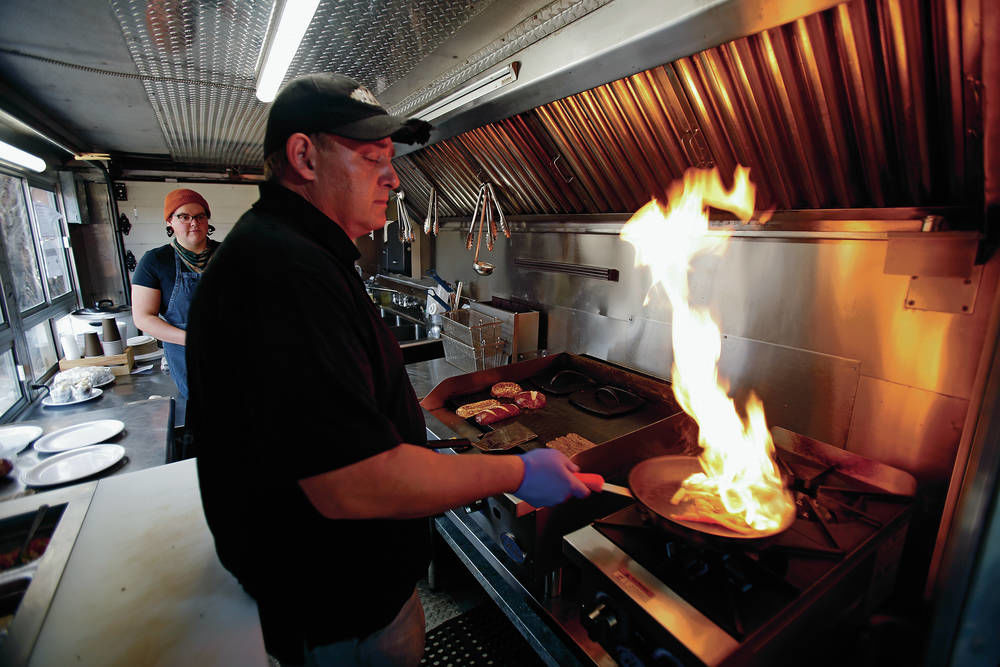 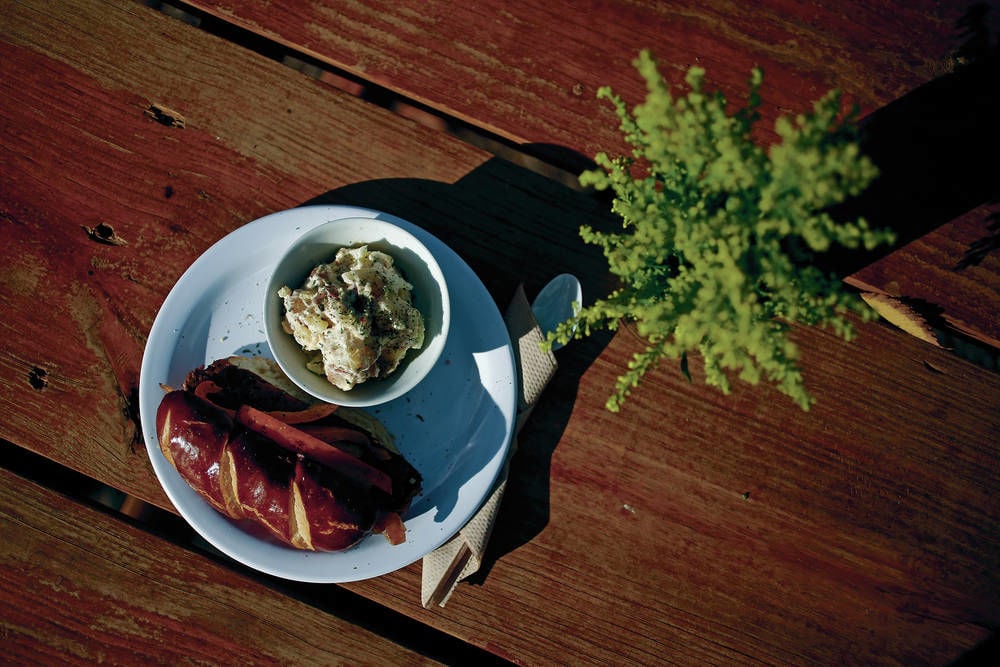 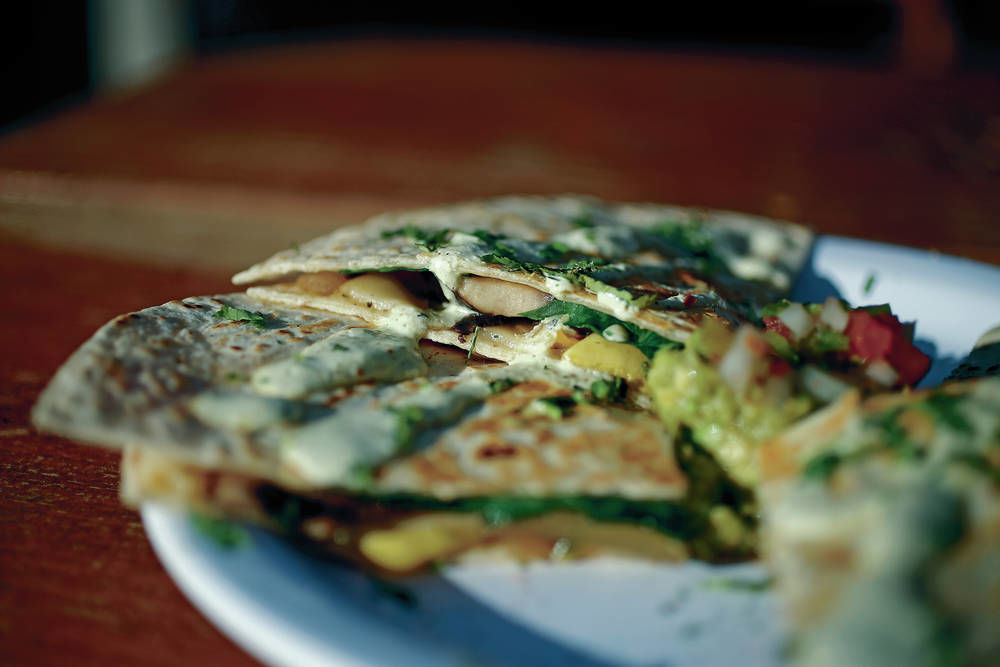 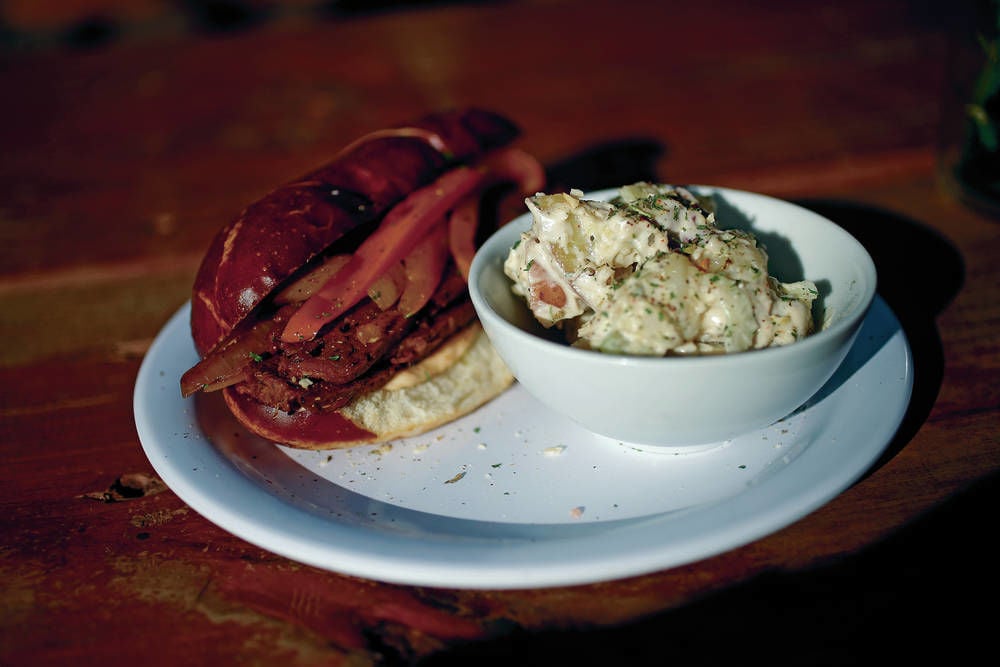 ABOVE: Root 66 serves the trendy and eco-friendly Impossible Burger — which looks, tastes and smells like beef but is made without animal products — with a nut-based cheese, pickles, lettuce, tomatoes, onions and special sauce.

LEFT: Gail Patak, chef and co-owner of Root 66, has honed her vegan versions of classic dishes since becoming a vegan about 12 years ago.Photos by Luis Sánchez Saturno The New Mexican

There’s a lot packed into the 140 square feet or so of space inside the new food truck in town.

Root 66 is a vegan food truck, serving up meat- and dairy-free fare from its four-days-a-week spot at the Santa Fe Brewing Co.’s Brakeroom location. It’s also a little truck with a big mission.

Several of them, actually.

“The whole point is to provide great-tasting comfort food that just happens to be vegan,” said Dave Holland, half (along with spouse Liddy Martin Holland) of one of the three married couples who co-own Root 66. “So our focus is not on vegans. Vegans will come to our food truck, but our focus is to have nonvegans come and eat this fabulous food.”

The menu and recipes come courtesy of chef and co-owner Gail Patak, a traditionally trained chef who has honed her vegan takes on classic dishes since becoming a vegan about 12 years ago.

“I just took all the traditional techniques and flavors and textures, and that’s how I survived in the world,” Patak said. “When I first went vegan, where we were in Florida there just weren’t any options, so I just decided I was going to figure out how to make everything I enjoyed vegan.”

That means you’ll find points of reference like cheesecake, buttermilk and sausage on the menu without the “vegan” qualifier. But rest assured: Everything here is 100 percent free of animal products.

The crab cakes, for instance, are one of Patak’s pre-vegan recipes, now modified using tempeh and seaweed. At Root 66, they’re part of a sandwich with lettuce, tomato and remoulade sauce on a pretzel bun ($11).

Root 66 also serves the trendy and eco-friendly Impossible Burger — which looks, tastes and smells like beef but is made entirely without animal products — with a nut-based cheese, pickles, lettuce, tomatoes, onions and special sauce ($12). Because Root 66 is all vegan, you can be sure it wasn’t, say, cooked in butter or grilled alongside its meat-based doppelgangers. (Fifty of Route 66’s version sold out at the Oct. 1 launch party “in no time flat,” Holland said.)

Spreading the word that vegan food can be satisfying and delicious dovetails with the broader mission of encouraging people to embrace a vegan lifestyle. Patak is a Food for Life instructor, certified on the nutrition and development of products that can help make it easier for people to adopt a plant-based or vegan diet, she said. JC Corcoran and his wife and Root 66 co-owner Rae Sikora are founders of meetup.com group Santa Fe Vegan, which has more than 1,000 members.

“What we’ve found is that people just go for taste and mouthfeel. As long as they get that, they don’t think, ‘Oh, I want an animal to eat,’ ” Holland said. “They just want good-tasting food.”

In fact, Root 66’s overarching mission is tied directly to animal welfare: Corcoran and Holland are board members of Animal Protection Voters, the nonpartisan legislative arm of Animal Protection of New Mexico, and a portion of Root 66’s sales benefit it. Animal Protection Voters works to enact laws benefiting animals, targeting issues such as coyote-killing contests, traps and poisons on public lands, and low-cost spay/neuter programs in New Mexico. Among other missions, the group also works to provide temporary shelter for domestic violence survivors’ pets, which are frequently targeted by abusers to control family members, Corcoran said.

As a nonprofit 501(c)(4) organization, though, donations it gets aren’t tax-deductible, which limits the aid it receives. That’s where the idea of a food truck was born, about three years ago, Holland and Corcoran said.

About a year later, they found one: a converted FedEx truck in El Paso. But they still needed the right chef.

What follows is the kind of meet-cute that only happens in a place like Santa Fe. A noted artist and his partner became regulars at Gail and restaurateur husband Ron Patak’s Jacksonville, Fla., eatery, Garden Truck Food Co. When the couple moved to Santa Fe, Gail Patak shipped care packages of the artist’s favorite meal: vegan sausages complete with smoky aioli and caramelized peppers. The artist, a fellow member of Santa Fe Vegan, shared the food with Corcoran and Sikora.

Next up: Plans for the future. The owners hope to expand to a brick-and-mortar restaurant within the next year to 18 months, are considering commercial food production and want to expand beyond Santa Fe to Albuquerque, Las Cruces or into Colorado.

In the meantime, Root 66 is dishing out hearty vegan fare locally, one eco-friendly plate at a time.

Where: The truck is parked behind the Santa Fe Brewing Co. Brakeroom, 510 Galisteo St., Santa Fe. (Parking and food truck are accessed from West Manhattan Avenue.)