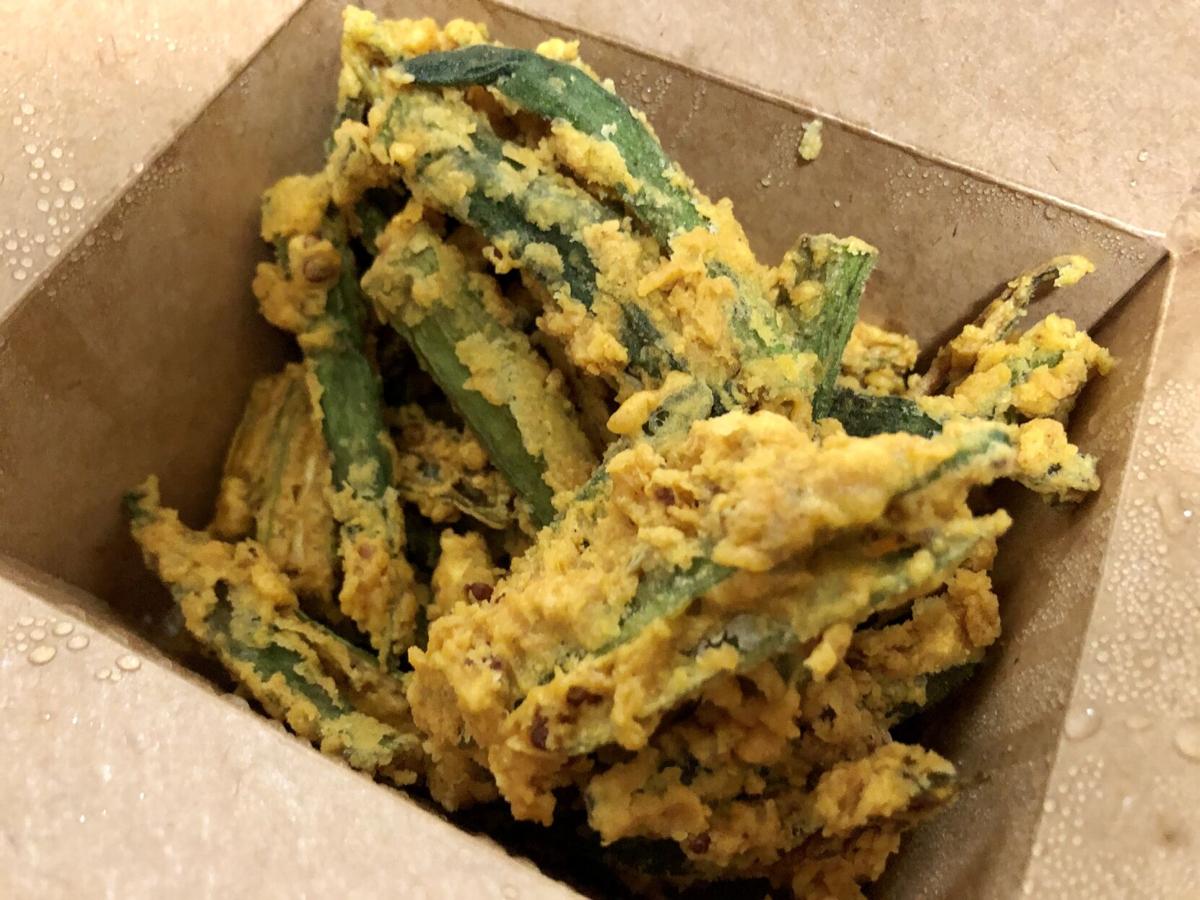 The okra fry from Aruna Cafe. 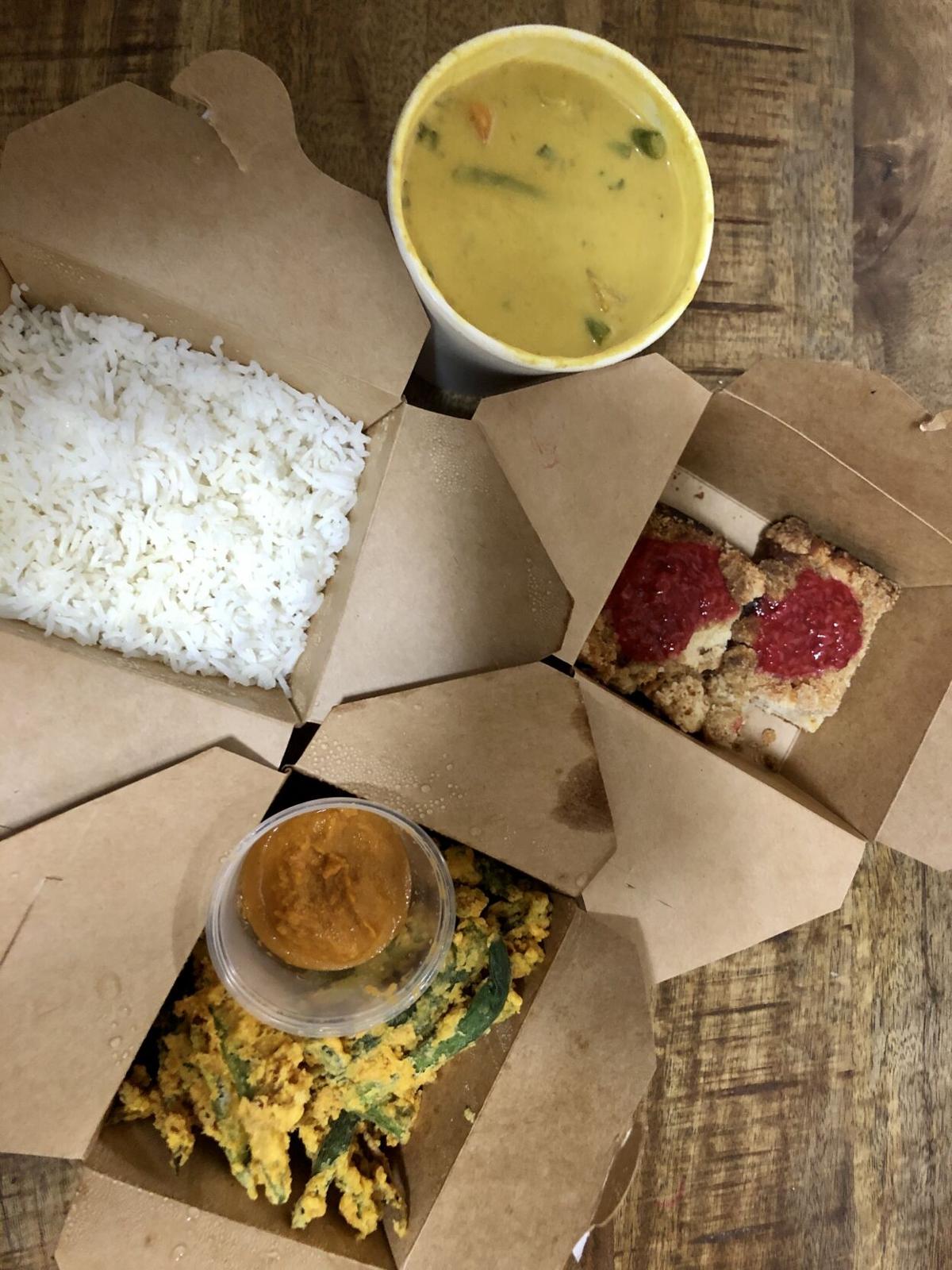 A multicourse meal from Aruna Cafe. Generally, the meals feature three courses, including a curry and a dessert. Meals are $42 for two people and $25 for one. 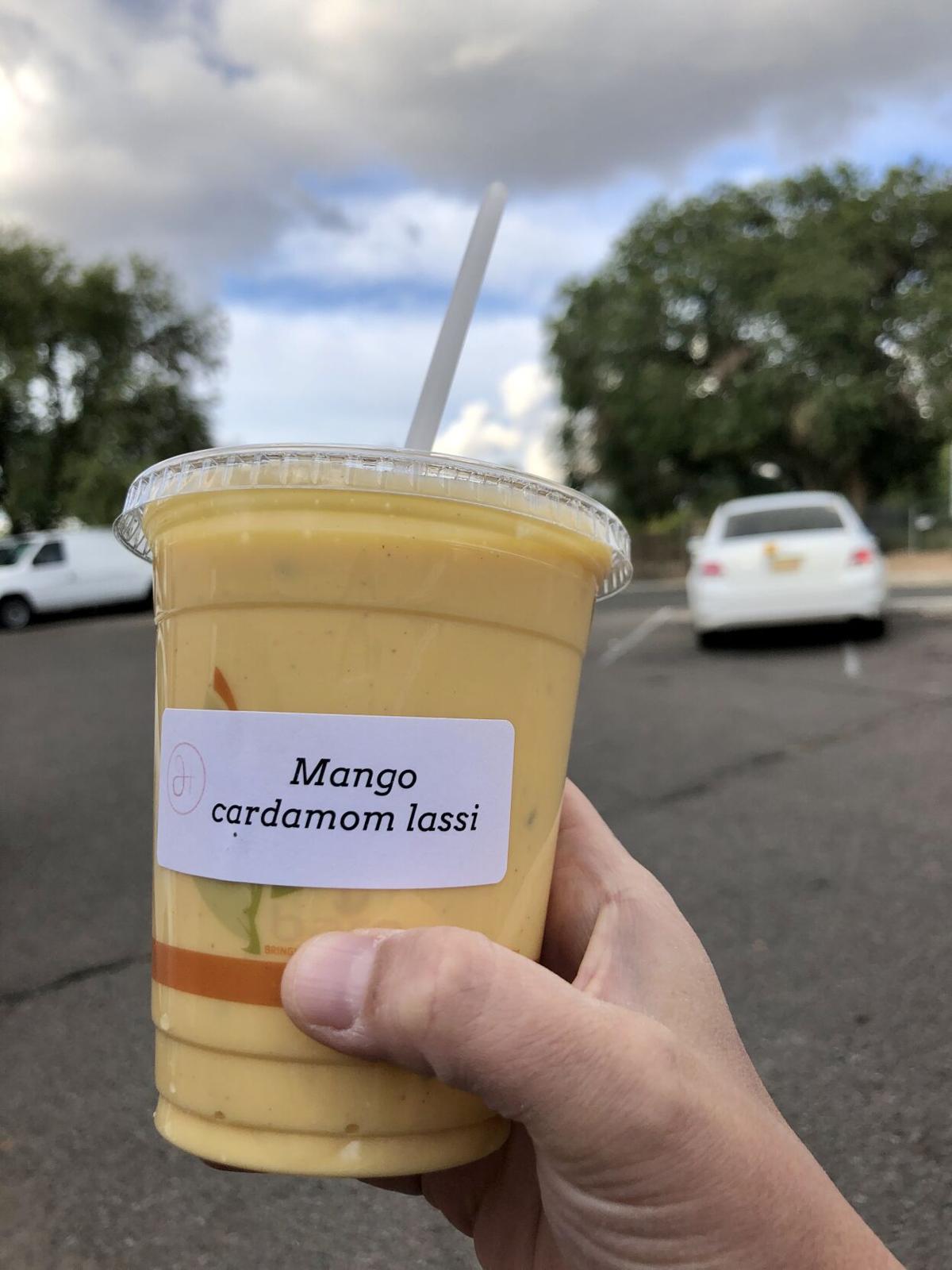 The okra fry from Aruna Cafe.

A multicourse meal from Aruna Cafe. Generally, the meals feature three courses, including a curry and a dessert. Meals are $42 for two people and $25 for one.

There we all were, a half-dozen or so, standing around on a Friday evening in a parking lot off Rufina Road. None of us spoke much, but something about the quiet anticipation felt special as, one by one, a woman at the door handed us inconspicuous brown bags.

Inside: a carefully packed, still hot, don’t-miss-it medley of an Indian dinner.

Aruna Cafe has been sending out these multicourse, fixed-price meals portioned for one or two diners since June. But the menu — available for pickup only during a two-hour Friday window — changes weekly according to the seasons and to chef Dhirendran “Dhiru” Paulraj’s creativity.

On this particular week, for instance, chef Dhiru spotted a bounty of fresh okra in Albuquerque and put it center stage for the first course, with a light, delicately seasoned breading and a sweet-onion chutney for dipping. As a native Southerner with warm memories of my grandmother frying up okra in her Georgia kitchen, believe me when I say I’d camp out in that Rufina parking lot for an hour just to eat a box of Paulraj’s take on the dish fresh and piping hot from the kitchen.

But the okra dish is ephemeral, destined to be replaced by other opening courses as autumn settles in. Recent choices have included a fall salad with roasted beets, fig, cucumber, pumpkin seeds and a golden ginger dressing; a green cabbage and onion pakoda fritter; and a chilled cucumber and basil soup.

Generally, Paulraj dreams up three courses, including a curry and a dessert. Meals are $42 for two people and $25 for one. Order them with a dreamy mango cardamom lassi or Paulraj’s signature sarsaparilla lemonade, a bright, sweet marriage of licorice and lemon that’s unlike anything I’ve had in Santa Fe.

My Friday meal included a mixed-vegetable moilee, a rich, coconut milk-based stew with potatoes, sweet potatoes, green beans, cauliflower and more veggies, and two crumbly, complex squares of apple cake made with brown sugar cardamom streusel and raspberry compote. The portions were perfect for two with no leftovers.

Once the menu has been posted online and sent out to email subscribers, you place your order online at arunacafe.com (including specifying whether you’d like your curry regular or mild) and set an approximate pickup time. Then you swing by the commercial kitchen (next door to Alicia’s Tortilleria), where a host at a table out front connects you with your coveted food and drink.

Paulraj was trained at culinary school in India and worked at a South Indian restaurant called Dosa in San Francisco before helping to open a restaurant in Philadelphia. In 2014, he was recruited to help chef Paulraj Kumasamy, with whom he’d worked in San Francisco, to open Paper Dosa in Santa Fe.

He felt a connection here, right down to the squat buildings and coyote fencing that reminded him of home in India. “People here are more supportive and loving” than in the big cities, he said. “There is a community here.”

The next year, he met Tess Wilkes, a Santa Fe native, and they married in 2016. Now they have two young children — Aruna, for whom the business is named, and Anjali — and are cafe co-owners.

The parallel timing of starting a family and a business has a history in Paulraj’s family. Wilkes tells the story: His mom has for years operated a small shop in front of the family home in India selling dosa batter. When Paulraj was born, the family had to pay the hospital before bringing him home, so his father went around collecting debts owed on batter that had been sold. Now, Paulraj converted his habit of cooking for friends at home into a proper business just as their family expanded: “You do your craft when the baby comes,” Wilkes said with a laugh.

Paulraj, who still works at Paper Dosa three nights a week, credits both his family in India and his training for his culinary versatility.

“I have worked in different cuisines, so that’s what gave me confidence to do a different menu every week,” he said. “I go all around India, not just focusing on one region. It depends on what’s available and how it balances.”

He encourages feedback on all his dishes, and is expanding into catering and private cooking.

“I’ve never cooked this many different dishes every week before,” he said. “It’s challenging but in a good way.”

Already, he said, he has a roster of regular customers who order the new menu every week. I understand the appeal. Friday evening, a parking lot, a brown bag bearing a delicious dinner that exists for one night only. See you there.