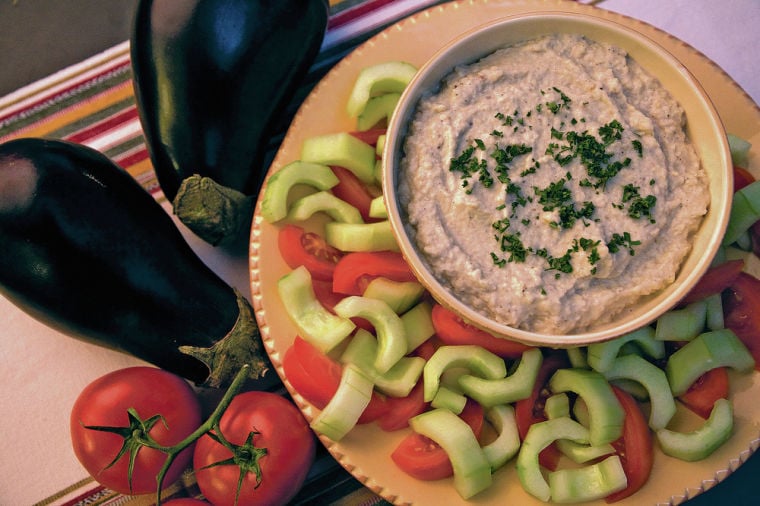 Roasted eggplant with tahini, lemon and garlic served with cucumbers and tomatoes for Passover. Lois Ellen Frank/For The New Mexican 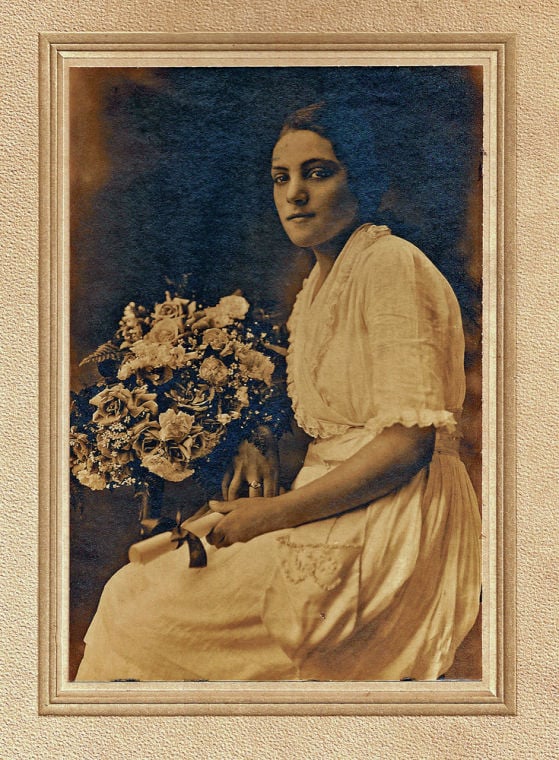 Roasted eggplant with tahini, lemon and garlic served with cucumbers and tomatoes for Passover. Lois Ellen Frank/For The New Mexican

As a child, chef Lois Ellen Frank was transported into a world of rich tradition every time she celebrated Passover with her grandmother, Elizabeth Barazani Frank, in Brooklyn, N.Y.

“As I began the sacred walk up the stairs into grandma’s apartment,” Frank said, “I smelled the scent of the rosemary- and lemon-infused roasted chicken wafting through the air. My eyes took in the bright green beans, tomatoes and almonds that colored the beautifully set table like a work of art.”

However, it was the small marzipan squares of yellow cake — decorated in shades of pale pink and mint green — with chocolate that remain one of Frank’s favorite Passover desserts.

As Frank and her family gathered at the table, they listened to the story of Passover. “While grandma shared the events occurring during the Jewish exodus from Egypt to freedom, I was always grateful to taste the thick charoset, which is a paste found at every Passover Seder, consisting of dates, raisins, nuts, spices, wine and apples,” Frank said.

In addition to the charoset, Frank also enjoyed whipped tahini, a sesame seed paste, mixed with a variety of fresh vegetables, including eggplant, tomato and zucchini. For her grandmother, whose family was of Sephardic ancestry, the paste was a staple dish.

After the Spanish Inquisition, the Barazani family made their home in Turkey. Afterward, the Barazanis migrated to Palestine — also known as the land of Israel — and in 1915, the family chose to follow the American dream and decided to immigrate to New York through Ellis Island.

Money was scarce, and becoming self-sustaining included growing food. Before the family left for America, Barazani Frank’s mother, Beya Yeshaya, sewed seeds — from their garden of tomatoes, eggplants and zucchinis — into the hemline of her daughters’ skirts.

With the seeds of her past, present and future sewn into her identity, Barazani Frank planted a garden in her small Brooklyn backyard that would allow her to create foods reminiscent of her Sephardic heritage, including baba ganoush.

“Whenever I ate my grandmother’s Kosher meals, I always felt like they were just so delicious,” Frank said. “I would constantly ask my grandma, ‘Why is your food so good? How come when I make your recipes, they just don’t taste the same?’ She would just hug me and say, ‘It’s grandma’s secret.’ ”

With that answer, Frank’s soul was filled with a sense of wonder and curiosity.

In 1981, when Frank was 21 years old, Barazani became very ill. While visiting her grandmother in the hospital, she finally was told the secret ingredient of her grandmother’s cooking.

“I asked grandma one more time, ‘Why is your food so delicious and satisfying?’ ” she said.

Barazani Frank looked into her granddaughter’s eyes and said, “It tastes so good because I love you so much. In every dish, I put all of my love for you. You are actually tasting my love in every bite.”

Frank had finally heard the answer she had been asking for her whole life, but somehow she had already known the power of her grandma’s love. At that time, Grandma Barazani Frank also asked Frank to promise to keep the family together by hosting holidays and reaching out to each of her three brothers and sisters. Frank took this promise seriously, but at 21 years old, she said she still needed to explore the Native American heritage of her mother, Jeanne, too.

In the late ’70s and early ’80s, Frank began working in restaurants. Around the same time, she started attending Brooks Institute in California, where she majored in photography. “At this time, I worked at the first Good Earth restaurant in Santa Barbara, [Calif.], as a professional cook,” Frank said. “I would cook delicious, fresh, local food, then photograph my meals for school.”

In addition to cooking and photography, Frank had become an organic gardener. Upon her graduation from Brooks Institute in 1985, she met an elder, Ernst Haas, who told her to explore her Native American roots. Before she did that, however, she worked in corporate America, shooting food ads in the advertising industry during the 1980s in Los Angeles.

Soon, Frank began to contemplate her identity again with her grandmother and mother in mind.

“When I was growing up, my mom started a garden, [and] we tended to it and ate foods from it often,” Frank said. “We learned to respect the Earth and the gifts it gave us as well as the importance of family.”

In 1997, Frank’s experiences inspired her to re-enter academia and create her master’s dissertation (“How Corn is a Common Thread to All Indigenous Tribes Throughout the Americas”) at The University of New Mexico. In 2011, Frank obtained her doctorate in cultural anthropology from UNM.

With a plethora of food knowledge, Frank created Red Mesa, a Native American catering and food company with her good friend and chef, Walter Whitewater. She also has written a James Beard award-winning cookbook, Foods of the Southwest Indian Nations.

In her spare time, she teaches an indigenous food class at the Institute of American Indian Arts, in addition to teaching cooking classes at the Santa Fe School of Cooking. She will publish her second book, tentatively titled The Turquoise Plate, which will chronicle the research for her doctorate dissertation.

For Frank, food is closely related to her core being. She said it captures the essence of family heritage cultural rituals. So every Passover, Frank recalls her grandmother and all of the love she shared with her grandchildren. And to this day, whenever she eats those deliciously light marzipan cakes, she thinks of her grandmother.

Where is the recipe for that lucious Herb and Citrus Roasted Chicken? I'd love to make that for the holidays and for any time of the year for that matter.

No Balabusta would ever serve burnt chicken to her family on Pesach or any other time. Perhaps The New Mexican should do a better job and do stories on the numerous excellent cooks in Santa Fe's large Jewish community who make traditional foods that actually look and taste delicious and are not burnt. Thank you.

I understand the Jewish roots and food traditions when one witnessed it as a child, but what does it take in one's mother's background to have Native American roots? Does a drop of blood from a distant ancestor manifest itself in understanding how that distant ancestor cooked and ate? I suspect a foodie of today would abhor the actual cooking and eating habits of the Native American. But romanticizing the past is a lot better than trashing it, I will admit.

What a great article! I have attended many of Lois Ellen's Native American cooking classes and dinners and this article adds a new dimension to this multi-talented woman. Her lectures on food are both entertaining and educational and are a "not-to-be-missed" experience when visiting Santa Fe, New Mexico. I hope others will attend her local events throughout the years to come.

Is that poor chicken wearing a black legband? Militant chicken!