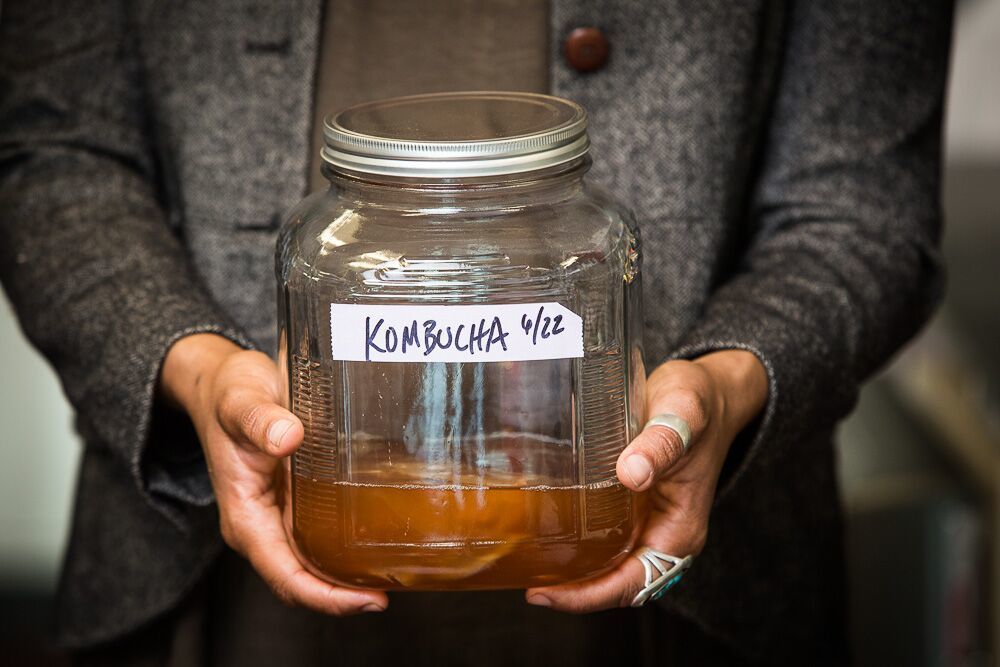 Kombucha is a fermented drink made by introducing a “symbiotic colony of bacteria and yeast” (affectionately known as a “SCOBY”) into brewed tea to create a vinegary, fizzy probiotic drink that many consider to have a vast array of health benefits, and which has gone fairly mainstream in recent years. Photo by Minesh Bacrania 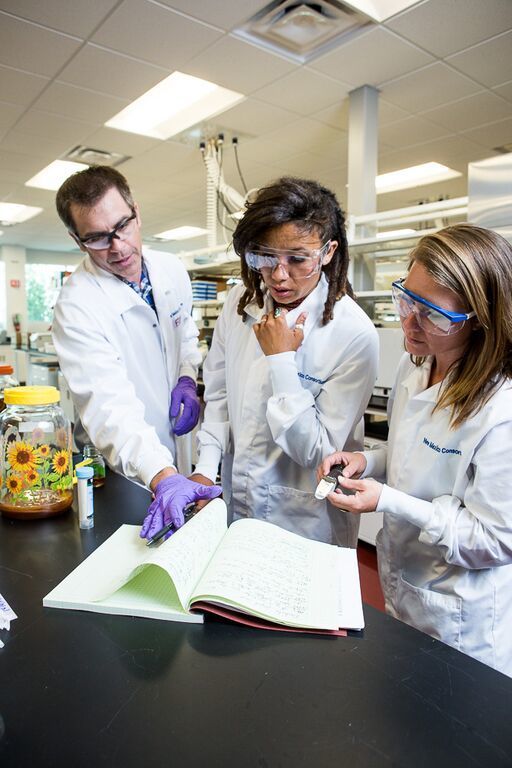 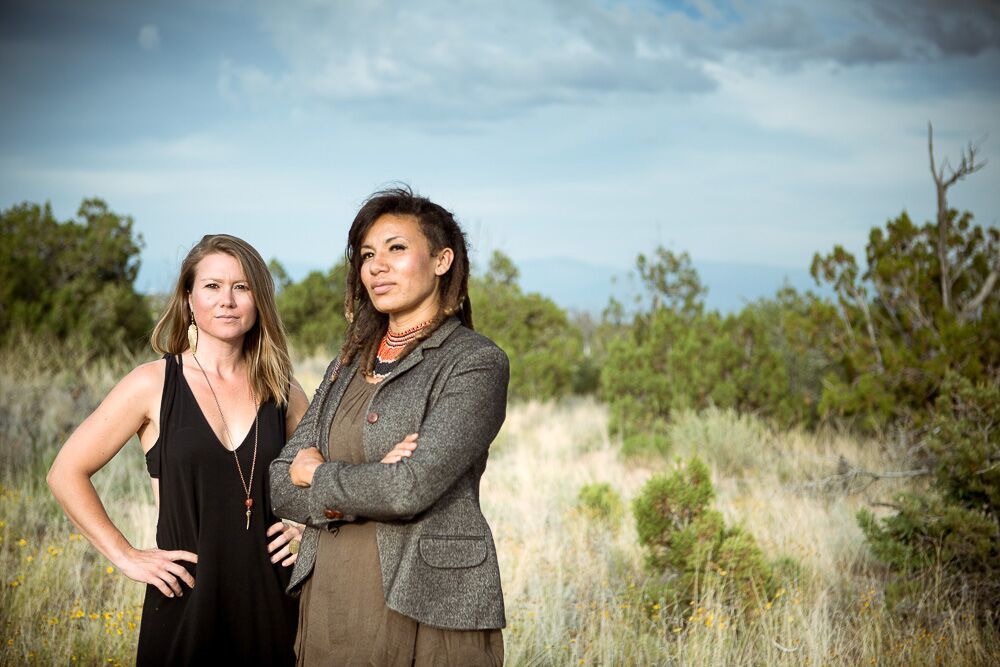 Kombucha is a fermented drink made by introducing a “symbiotic colony of bacteria and yeast” (affectionately known as a “SCOBY”) into brewed tea to create a vinegary, fizzy probiotic drink that many consider to have a vast array of health benefits, and which has gone fairly mainstream in recent years. Photo by Minesh Bacrania

Repopulating your gut flora is about to get a lot more fun. One does not typically throw around the word “probiotic” at a party (except maybe in Santa Fe), but beneficial bacteria enthusiasts are about to get a brand-new product for after hours, thanks to Honeymoon Brewery and their cutting-edge kombucha beer.

Kombucha is a fermented drink made by introducing a “symbiotic colony of bacteria and yeast” (affectionately known as a “SCOBY”) into brewed tea to create a vinegary, fizzy probiotic drink that many consider to have a vast array of health benefits, and which has gone fairly mainstream in recent years.

Honeymoon Brewery, which currently produces only this alcoholic kombucha, comprises three Santa Fe locals who all went to Santa Fe Prep at more or less the same time. But the trio barely knew one another at school and only later reconnected, mostly by chance. Ayla Bystrom-Williams was introduced to Rena Glasscock by a mutual friend, and Bystrom-Williams began working for Glasscock at One Earth Solutions, an all-female landscaping company she managed.

“When we were reintroduced and remembered each other from Prep, it was kismet,” says Bystrom-Williams. “We connected right away.” James Hill, who is Bystrom-Williams’ life partner, graduated from Prep with her in 2003. While their graduating class consisted of fewer than 40 students and the pair had multiple classes together, they barely knew each other at the time and only later met, fell in love and got to brewing. “There’s so much you can miss in the person sitting right next to you,” Bystrom-Williams says.

Bystrom-Williams has eight years of enthusiastic home brewing under her belt, both of kombucha and beer, and has since turned both Glasscock and Hill into home brewers, too. When Bystrom-Williams founded Honeymoon Brewery, she was advised to pitch the idea to Whole Foods. She did and received an overwhelmingly positive response — truly overwhelming, in fact, as she was in the very nascent stages of setting up her company and had no way to make the product for which they clamored.

“It scared me because I wasn’t ready. I didn’t have a facility and production going, and they were pretty much knocking down my door to see when this product would be ready,” she says. “… They could see that this had a lot of market viability for them. There’s already five other companies working on kombucha beer, and one is owned by Anheuser-Busch, so it’s growing.”

Alcoholic kombucha is on the cutting edge of the craft beer movement, a potential wonder product that can both give you a fun buzz and repopulate your digestive tract. Regular kombucha is not technically alcoholic, but it is fermented and can sometimes be up to 1.5 percent alcohol, which was enough to get most major brands pulled from Whole Foods stores shelves in 2010. Most commercial kombuchas lowered their alcohol levels in response, but now the trend is swinging the other way.

“It’s been a long road to get to this point because kombucha is much more highly regulated than any other type of alcohol on the market,” Bystrom-Williams says. “The FDA got involved, and now our licensing process is really time-consuming.” In the meantime, Bystrom-Williams has been concentrating her efforts on aggressively networking, entering competitions and working on brand identity. She also applied for technical assistance funds from Los Alamos National Laboratory and immediately received a response from David Fox, a LANL biologist and home brewer who was excited about what Honeymoon was doing and immediately jumped on the train to help them engineer and optimize their new beverage.

“One of the things [Fox] realized that none of us had anticipated is that he would be creating a proprietary yeast culture for this beer, so it’s basically an organism that doesn’t exist yet,” says Bystrom-Williams. “He’s adapting it to certain environments where it wouldn’t be able to exist.”

Beer and kombucha are philosophically similar, but as Bystrom-Williams explains it, the yeast in beer eventually dies, whereas kombucha retains living cultures and beneficial bacteria. Kombucha, she says, will become slightly alcoholic when left to its own devices, up to 2 percent, but eventually the environment becomes too anaerobic and inhospitable for the yeast and probiotics. “We have to push it by making the transition for the bacteria and the yeast so they do what we want them to do,” she says.

The process of creating kombucha beer is similar to the open-air fermentation with wild yeast cultures used in the creation of Belgian lambics, but the more alcoholic the drink becomes, the more anaerobic it gets. What Honeymoon and Fox are doing is attempting to push the envelope on how much of an anaerobic environment their yeast and bacteria cultures can tolerate.

“[The cultures] can live in environments up to 10 percent alcohol. Anything below that, normal craft beer between 5 to 7 percent, it’s still manageable to keep the probiotics alive,” explains Bystrom-Williams. “It’s tricky, undoubtedly. That’s what David’s working on. We’re introducing the SCOBY into increasingly more alcoholic beer environments, and into a hopped wort environment because hops is a natural antiseptic, mutating the SCOBY to exist in these environments that are slightly more favorable to beer.”

The drink itself, which Bystrom-Williams compares to a kölsch, is currently unhopped (though they hope their ultimate flagship product will be hopped) and tastes like a “carbonated Champagne made from pu-erh tea. … The final product is amazingly carbonated and super refreshing, and it’s very light and not heavy like a normal craft beer, so when you look at it, it’s very golden.” There is no particulate or cloudiness as in regular kombucha, and at first glance, it looks like an ordinary craft brew. Also, Bystrom-Williams says, it tastes more like beer than kombucha and has, as she puts it, “gentle peach topnotes.”

The resulting drink is overwhelmingly approachable, even for people who view kombucha as something they need to take care of with Clorox. “It has a nice acid bite to it but literally no kombucha funk,” she says. “As a kombucha drinker, I’m a little disappointed it’s not more funky, but for most peoples’ palates it’s really nice. If they didn’t know it was kombucha, they’d think they were drinking a light sour beer.”

Also, because it’s made from fermented tea and not fermented grain, Honeymoon’s product is gluten-free. (This, however, does bring up the question of whether it can be legally classified as a beer at all, which will be another quagmire for Honeymoon to wade through.) As to what it’s like being drunk on kombucha, Bystrom-Williams and Co. are in the process of field testing that. “Just having one or two of these feels so different than anything I’ve ever tried, It’s a very strange experience,” she says.

Honeymoon Brewery hopes their product will launch by the new year. In the meantime, intrigued beer and kombucha drinkers can contact the brewers on their Facebook page (facebook.com/honeymoonbrewery) or their website (honeymoonbrewery.com) and ask for a free sample in exchange for filling out a survey. To get their product into people’s thirsty bellies, Honeymoon Brewery has reached out to local entities and businesses, giving out free samples at private events through what Bystrom-Williams calls their “Gypsy Brewing Program” because they’re a brewery without a home.

“We want people to see it and have an experience with a pint,” she says.