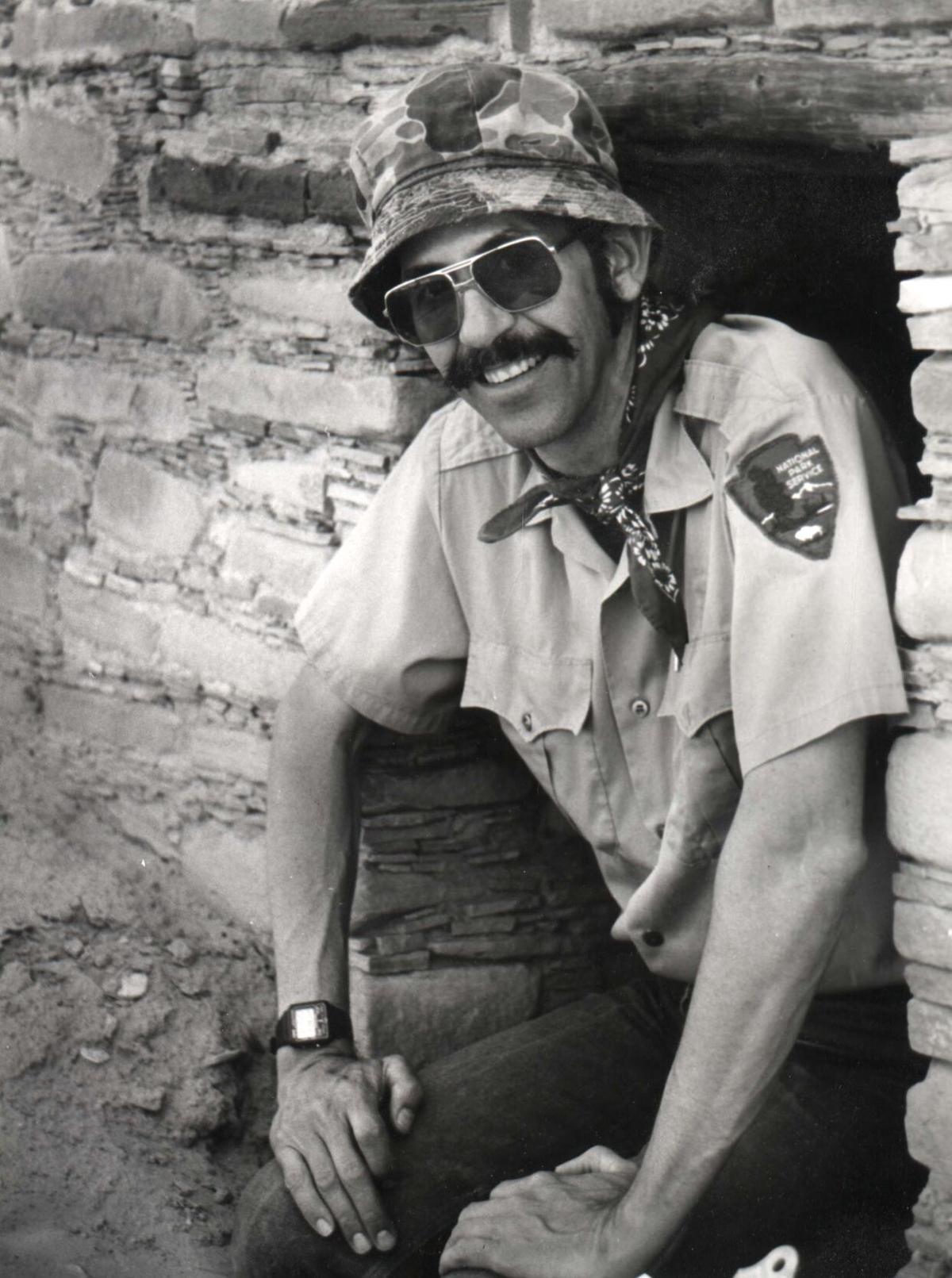 Thomas Windes photographed by Nancy Dahl at Pueblo Bonito in 1988 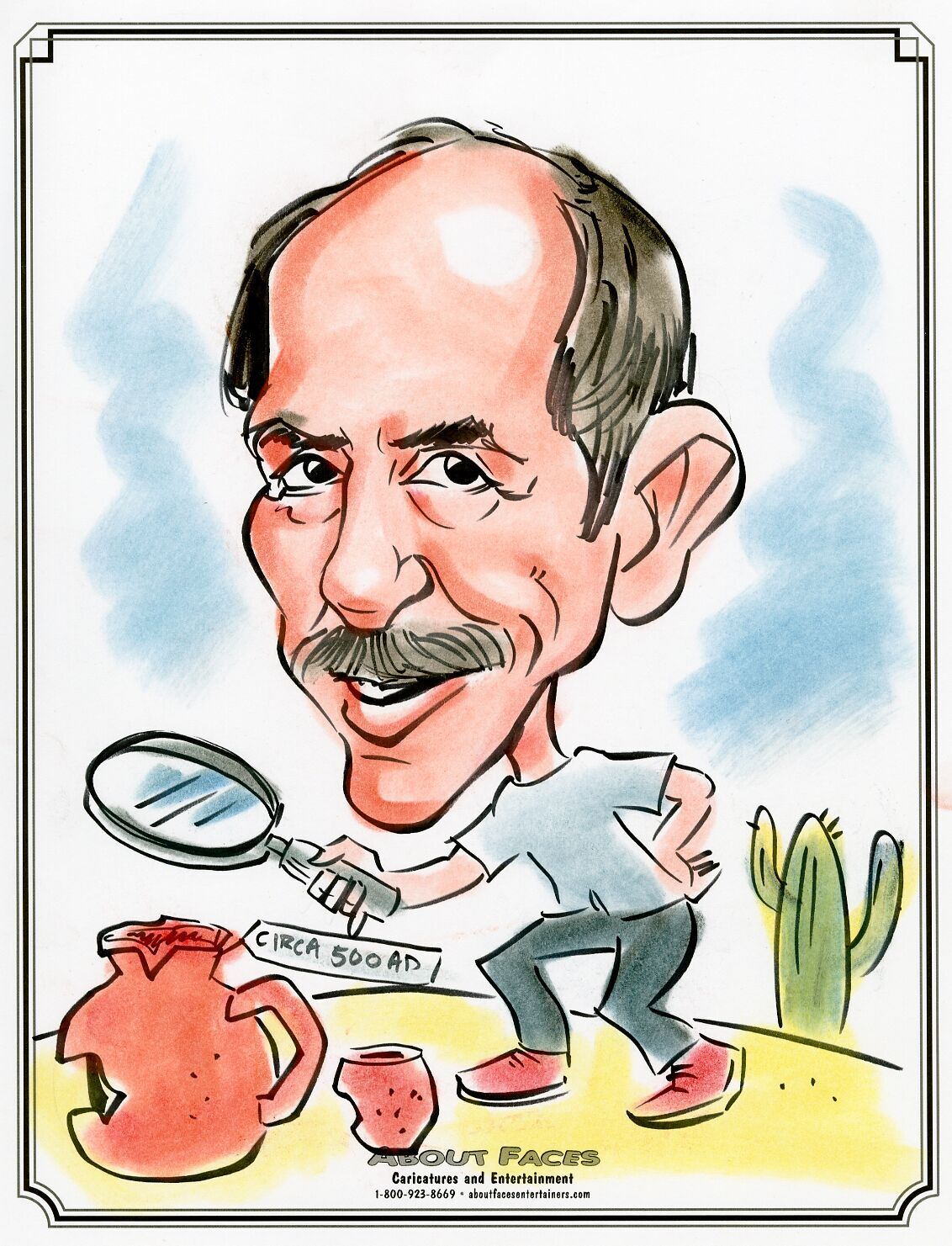 Cores sampled from the Trujillo Plaza lintel show the detailed tree rings that can be counted to tell how old the tree was, and can be compared to dendrochronology records to date it precisely. The tree that made this lintel was cut about 320 years ago. 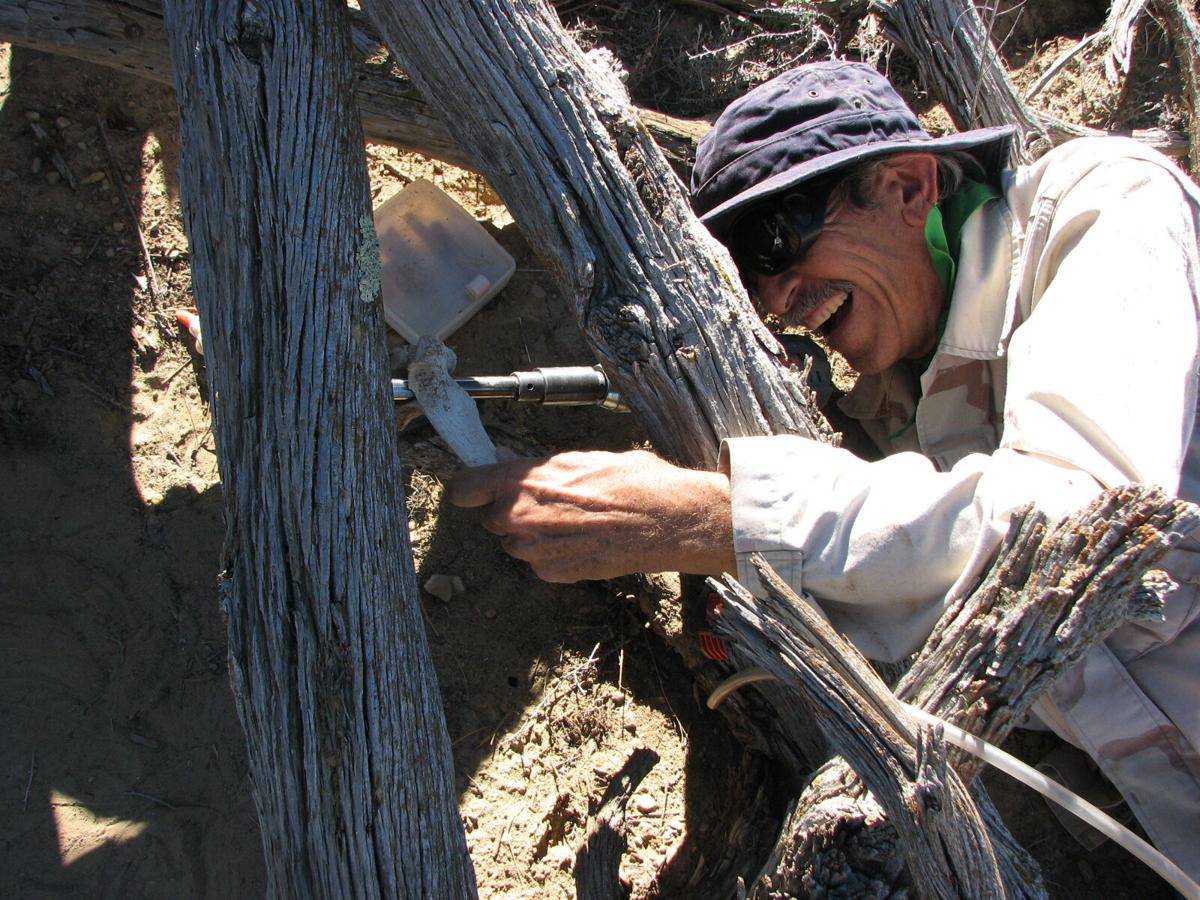 Thomas Windes in the field getting a wood sample 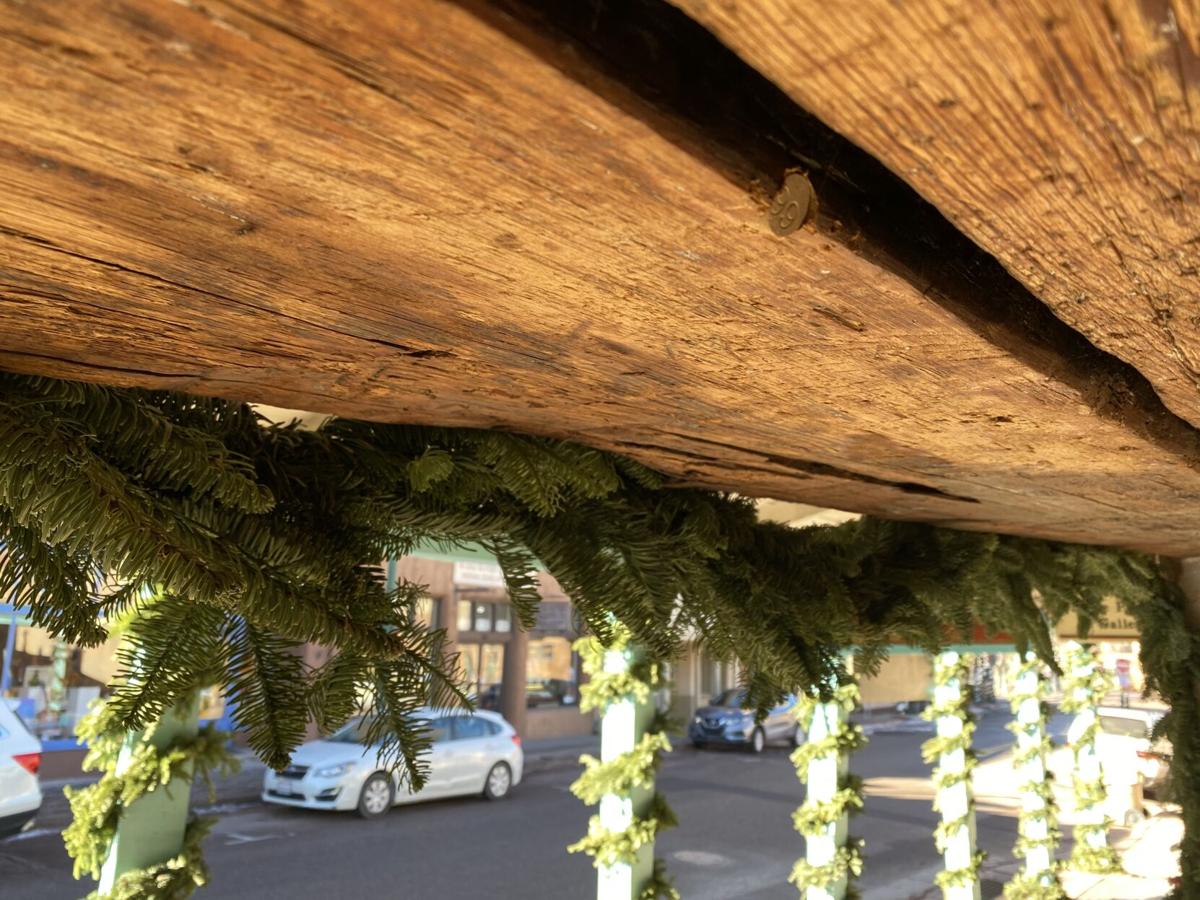 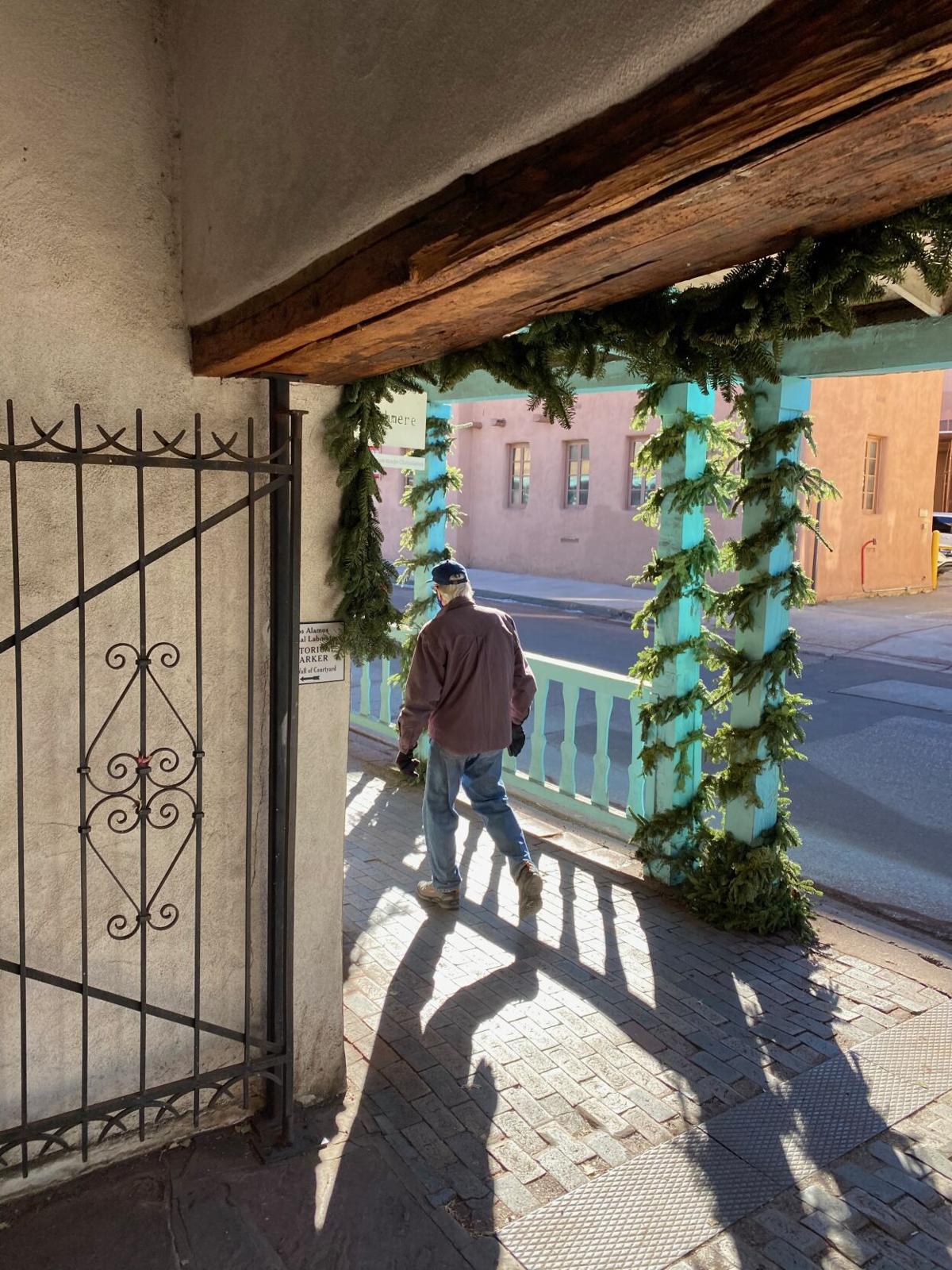 This masked pedestrian has just passed a lintel, at the entrance of Trujillo Plaza, that was cut from a tree that began life in about 1465

Thomas Windes photographed by Nancy Dahl at Pueblo Bonito in 1988

Cores sampled from the Trujillo Plaza lintel show the detailed tree rings that can be counted to tell how old the tree was, and can be compared to dendrochronology records to date it precisely. The tree that made this lintel was cut about 320 years ago.

Thomas Windes in the field getting a wood sample

This masked pedestrian has just passed a lintel, at the entrance of Trujillo Plaza, that was cut from a tree that began life in about 1465

Archaeologist Thomas Windes started taking tree-ring samples from very old buildings 35 years ago. That was at Chaco Canyon, where people lived in the 9th to 13th centuries. But he has also sampled Historic Period wood, including at various sites in Santa Fe.

Dendrochronology, dating wood by comparing its ring signature to those in a regional database, is one of the techniques that can help solve the puzzles of bygone civilizations. But it’s not that commonly used. Archaeologists often talk more about ceramics, rock art, bones, textiles, and stone artifacts.

“When I get a call I always ask them how much wood is there and then I multiply by 10 because I know they have no idea how much wood is there, because they’re not looking for it,” Windes said. “They don’t see it as a resource, as an artifact. But it can tell you about craftsmanship, it tells you what the climate was like when they got wood, and you can see how they treated the wood. The Chacoans were incredible. Nobody dealt with wood like Chacoans. They loved wood. And I think they loved it because it was hard to get.”

A thousand years ago, the Ancestral Puebloans living at Chaco harvested wood for their building roofs from the distant Chuska Mountains and Mt. Taylor. And there is evidence that they never let the logs touch the ground on the journey back home to Chaco Canyon. “It’s true,” Windes said. “They’re never marked by any kind of dragging or sloppy work; they’re exquisite.”

He has sampled wood at Cliff Palace in Mesa Verde and at the mission churches at Isleta, Santa Ana, Pecos, and San Miguel. The oldest sample he’s ever found in Santa Fe was at Trujillo Plaza on East Palace Avenue. Several years ago, he and Tom Swetnam (the former director of the Laboratory of Tree-Ring Research at the University of Arizona) conducted testing on dozens of beams and vigas in Trujillo Plaza and from The Shed restaurant in Prince Plaza.

To do this testing, the researchers use hollow drill bits to harvest cores about a half-inch in diameter and five inches long. Most of what they found at the Palace Ave. sites dates to the 1800s. But the innermost ring in samples from a lintel at Trujillo Plaza dated to 1465 A.D. There was no pith, but it is believed that the tree began its life in about 1460.

The outermost rings are from about 1689. However, some of the outermost wood was shaved off when the beam was squared up, so it was probably more like 1700. That was when the tree was cut. It could have been used in a building erected at the time of the Spanish Reconquista — but tree-ring dating can’t tell us where the piece of lumber has been. The lintel could have been recycled from an older building there or somewhere else.

Still, lintels are fairly dependable for dating structures, as are bond beams and floor joists, Windes said. “The wood that is the most valuable in the structure and also the one that is the least likely to give you the age of the building is a viga, and most of the time that’s all we have. They’re valuable because if somebody abandoned the building, somebody else used them, just like today.”

For decades, he has worked with the University of Arizona tree-ring lab, which has deep regional records and thousands of samples. But these days, Windes said, the facility has become more bureaucratic. “And the backlog is huge. Tom Swetnam, who grew up in Jemez Springs, runs a little lab out of his home and has been doing all the historic stuff for me.”

Experts read the rings in core samples by matching the pattern of dry years (thin rings) and wet years (thick) with the records. Swetnam has his own collection of cores and performs such analyses, but Windes does not.

“I don’t take a sample unless I can map it into the building,” Windes said. “I want to have a map of where every piece of wood is in the building. And when I plug the hole, I also put a number on it, my field number.”

A resident of Albuquerque, Windes is adjunct research associate professor of archaeology at the University of New Mexico’s Chaco Culture National Historical Park Museum Collection Facility. He also does volunteer work for the Bureau of Land Management, the U.S. Forest Service, and the U.S. Park Service.

“I get calls all the time. I love doing wood,” he said. “My main interest is to get the stuff out before something happens to it. It’s better to get it now, when you have the chance, because you never know what’s going to happen, especially in the parks that can be threatened in forest fires. In Utah I’m working for the BLM because they have increased visitation due to the conflict over Bears Ears [National Monument, which was downsized by the Trump Administration and may be opened to mining and drilling] and a lot of the sites there have never been mapped at the level we do it. We’re a unique crew.”

Now 77, Windes loves sharing his knowledge with graduate students and volunteers from the Sierra Club from all over the country. “It gives me such a boost to work with them.”

He also gives talks, like the one he did for the Albuquerque Archaeological Society on Dec. 15. Titled “Beautiful Things, Hugs, and Soot,” the presentation was, he said, “another slant of chronometric dating, by my recent work on [radiocarbon-] dating ceiling soot at some of my Utah sites to reveal much earlier occupations that were not apparent from any of the other cultural materials at the sites, and how using soot can broaden our knowledge of past occupations.”

The pandemic has slowed down his work, but he will soon be investigating Historic Period wood in buildings at the Plaza del Cerro in Chimayó and at Rancho de las Golondrinas. And he will be back at Chaco. “I have a bunch of rain gauges I put in all around the area about 30 years ago, some of them on tribal land,” he said. “I had about 12 gauges at one time that I monitored, trying to get some long-range records and to get a better read on the environment out there.”

He plans to leave his extensive records with the special collections at UNM’s Zimmerman Library. “That’s where my office is. I’ve been there for 40 years,” he said. “I’m trying to digitize it all but I’m also copying it on Mylar so it doesn’t disappear in the electronic world.”