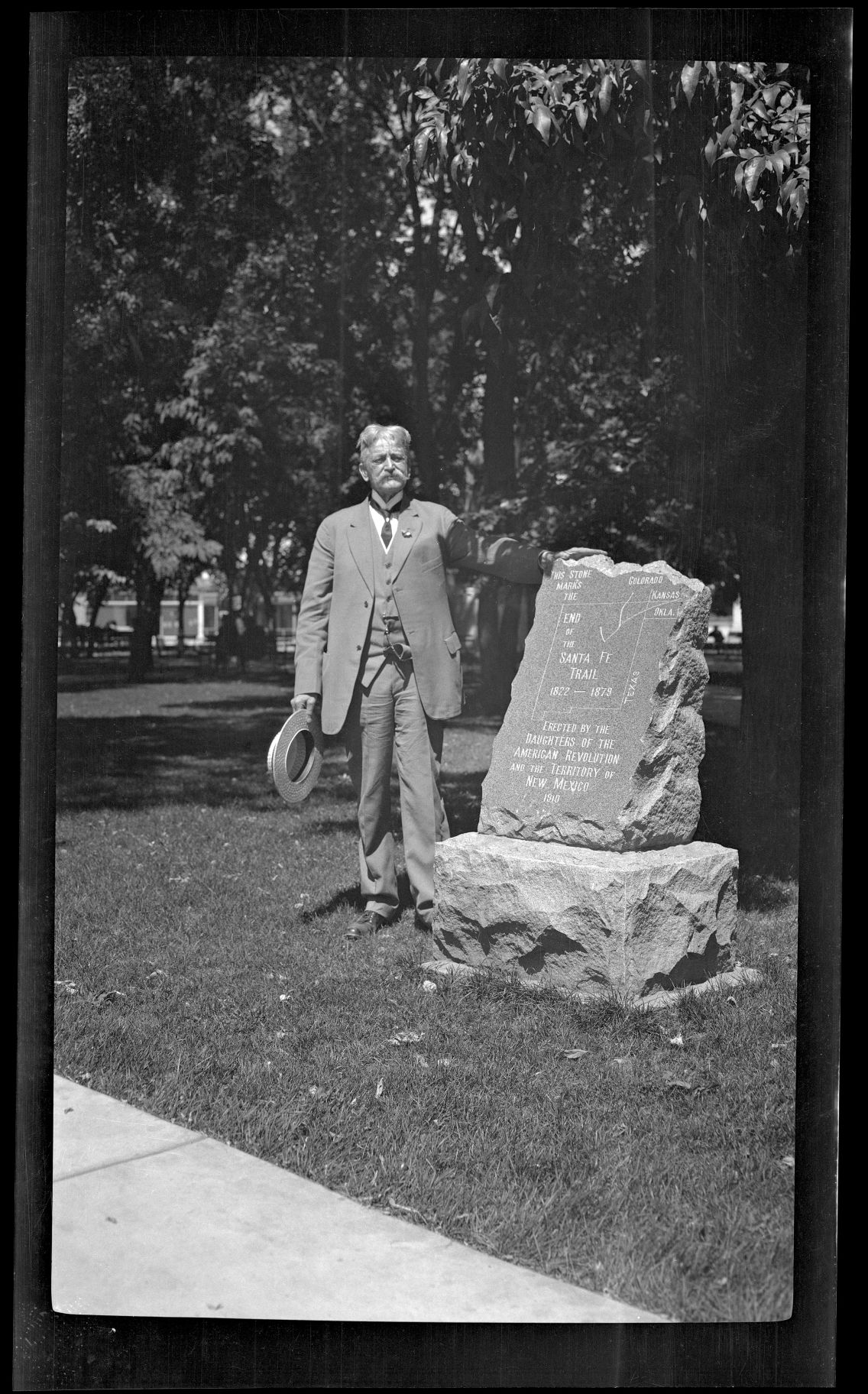 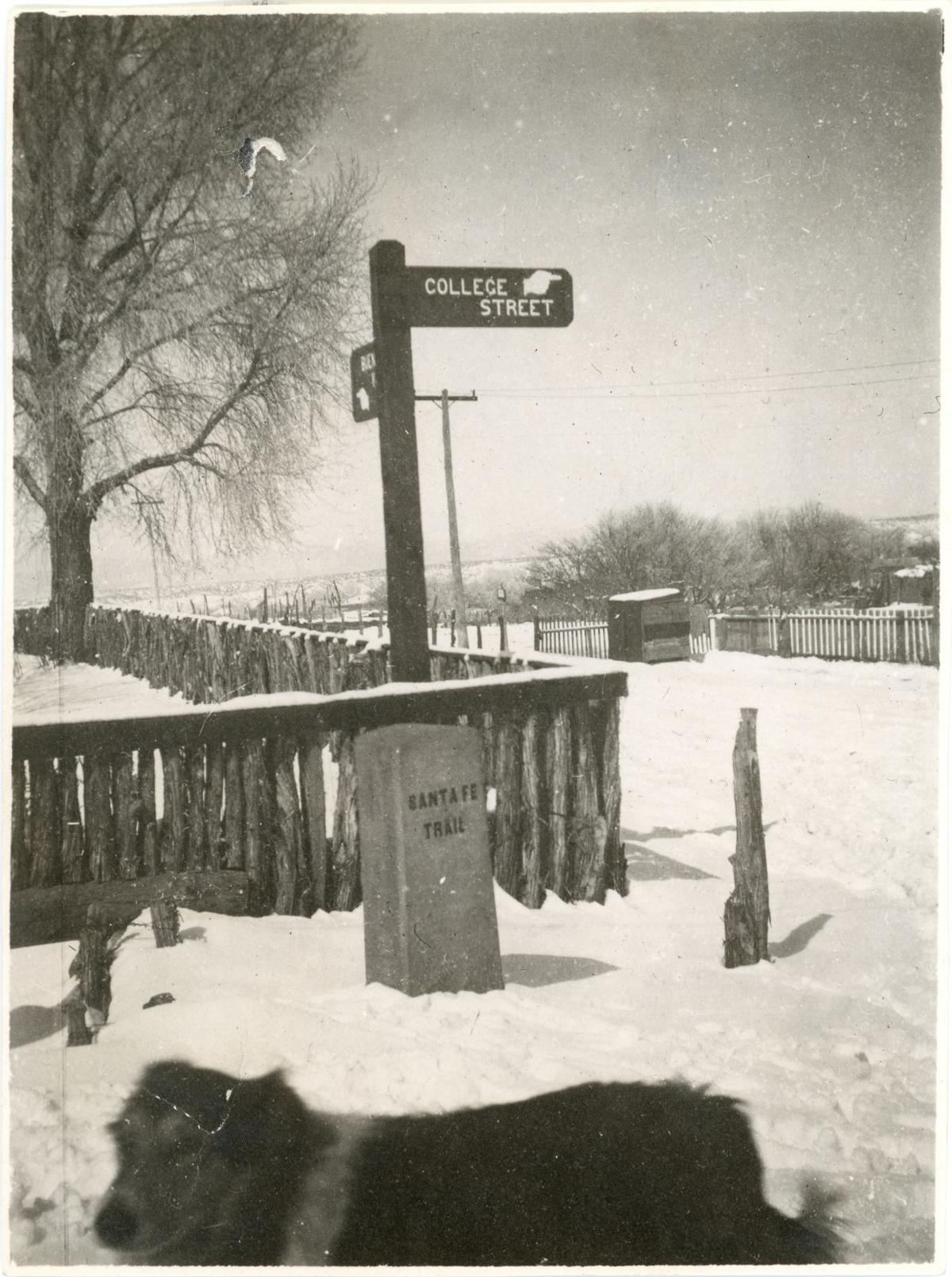 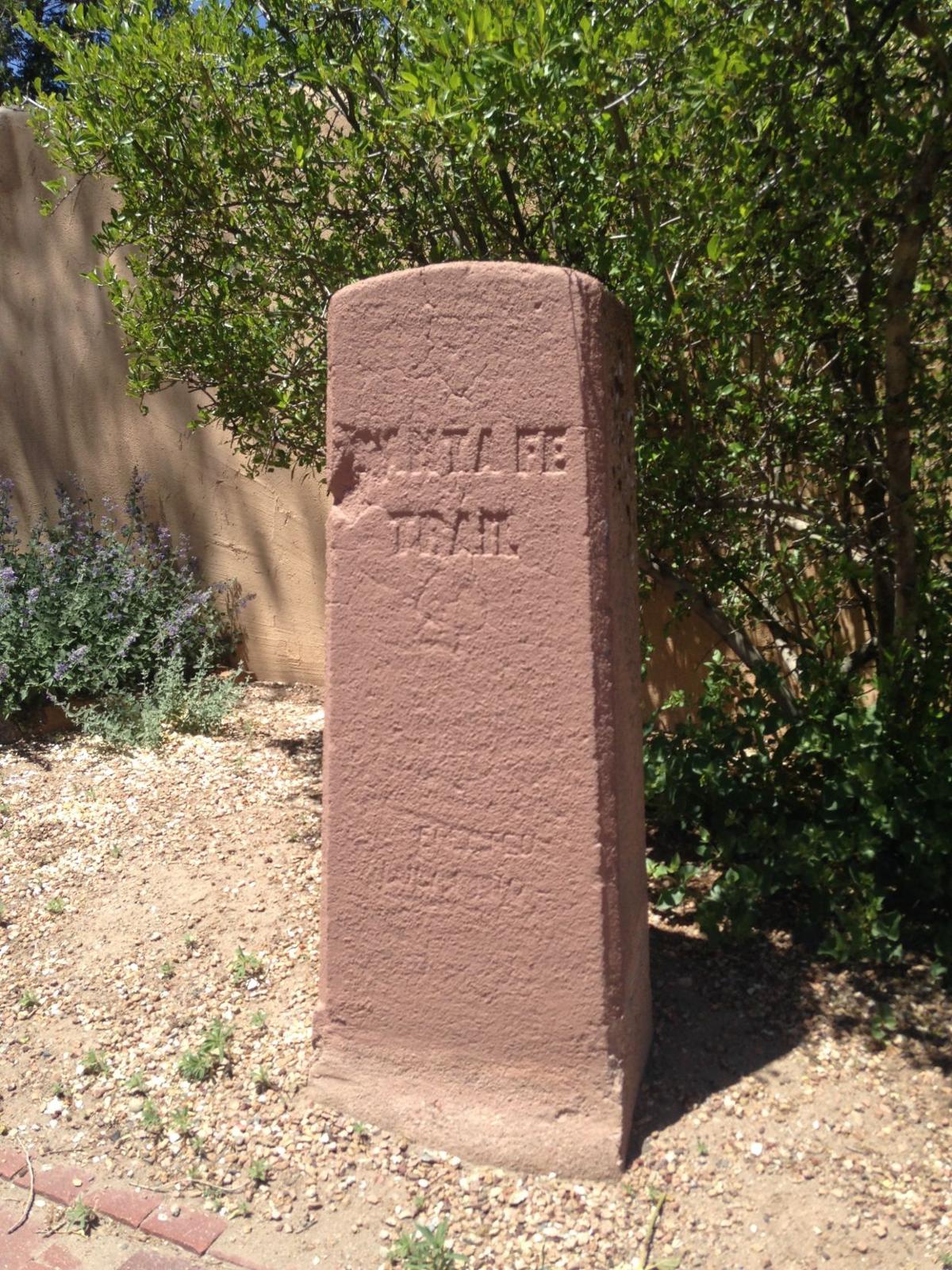 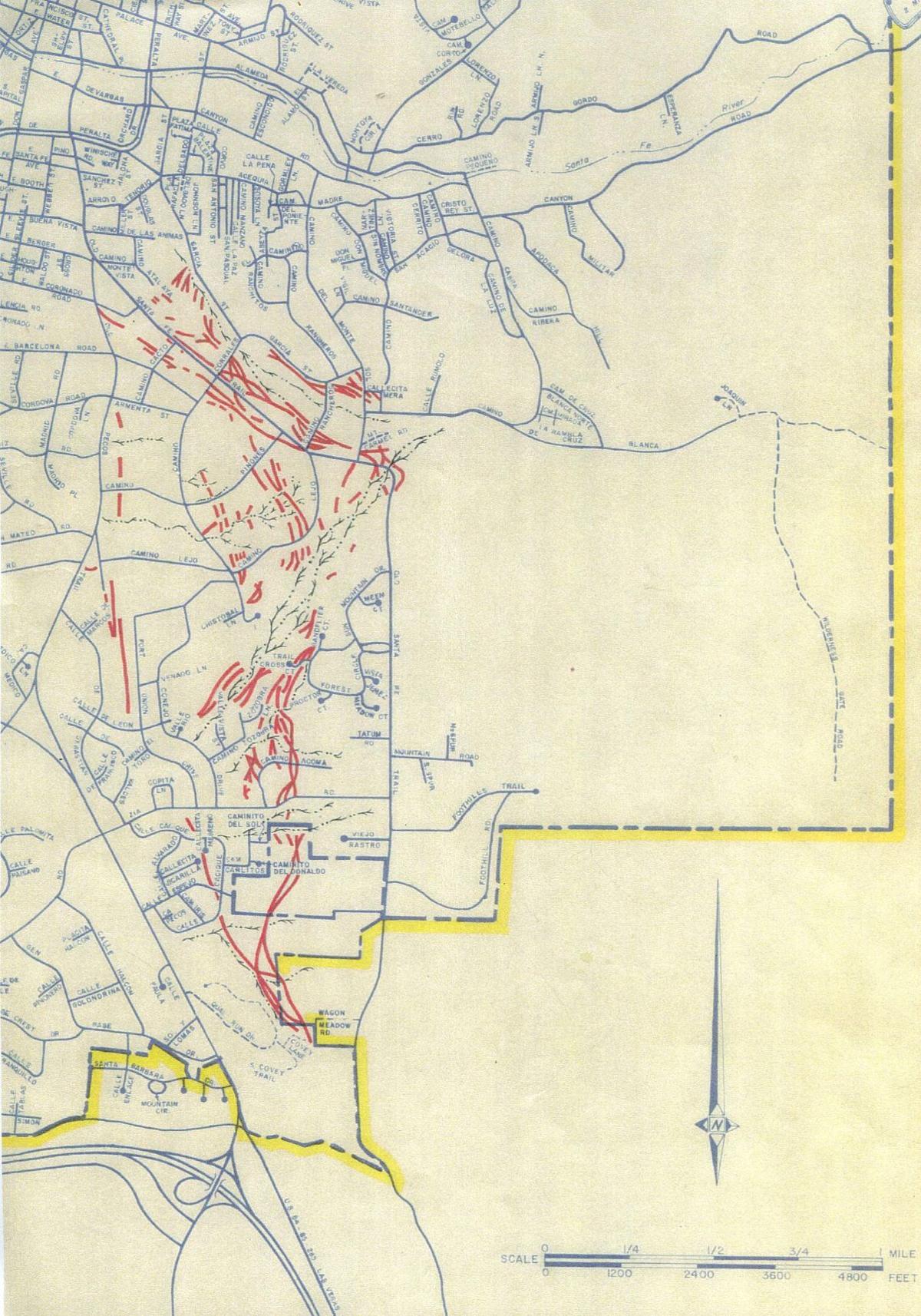 On a busy Santa Fe street, cars roll by day and night and many drivers never notice a small memorial to America’s oldest trail of westward expansion. The concrete stela, just 41 inches tall, rests a little over 1,000 yards south of the Santa Fe Plaza — the western terminus of the 950-mile-long Santa Fe Trail.

The City of Santa Fe hired Murphey about five years ago to research the marker, which apparently had little to do with the multi-state Santa Fe Trail monument program undertaken by the Daughters of the American Revolution.

In the middle of his research, Murphey secured an agreement that the New Mexico Historic Preservation Division would consider the marker and regional DAR trail monuments as candidates for the Santa Fe Trail National Register. But, he said, “Along the way, I slipped down the rabbit hole researching DAR memorialization. I got fascinated with how New Mexico Anglo elite women attempted to recreate Mount Vernon-type heraldry in dusty old Santa Fe.”

Nevertheless, in 2015 Murphey completed a detailed historic cultural properties inventory (some 2,100 words long) about the College Street marker. In it he tells that the Santa Fe New Mexican of July 5, 1910, “was impressed with the patriotic spirit of the town” on display the previous day but made no mention of the dedication of the little monument.

Murphey’s inventory says Dorman, who had moved to Santa Fe from New York City in 1901, did erect the first monument in New Mexico commemorating the Santa Fe Trail on that day.

About the DAR history, he quotes a 1906 Washington Post report that, four years earlier, the Kansas chapter of the Daughters of the American Revolution launched a movement “spreading across the West which has for its object the permanent marking of the old trails...” Murphey wrote that the DAR developed a standard “stone” marker, a small granite tablet, designating areas of historical significance along the alignments of the Santa Fe Trail. One of those was erected on the Santa Fe Plaza later the same year as Dorman’s more modest marker.

His concrete tablet is stamped “SANTA FE TRAIL” near the top and below that, barely visible today, “ERECTED JULY 4 1910.”

Dorman had come to Santa Fe for his health and soon began buying and developing lots in the Buena Vista Heights neighborhood. One of those lots, across Old Santa Fe Trail from the little marker, still holds the Craftsman-style house that he built for himself.

He went on to help establish the Santa Fe Commercial Club (now the Chamber of Commerce) and became its first president. According to the Murphey report, he was later appointed chairman of “the influential City Planning Board, which created the first city plan that included recommendations to rename historic streets and create a regionally-based Native American and Spanish architecture that is enforced by the city today.”

The historian notes that the property on which the marker sits was later acquired by the poet Wynner Bitter, who developed an informal artist colony there in the 1920s. Dorman was a resident across the street until his death at age 88 in October 1960.

The Santa Fe Trail will be 200 years old next year. “In 1821, on June 10, William Becknell published a notice in the Missouri Intelligencer newspaper soliciting participants for a trip ‘to the westward for the purpose of trading for Horses & Mules, and catching Wild Animals of every description, that we may think advantageous,’” according to the Santa Fe Trail Association.

The first Becknell party set out from Franklin, Missouri, on Sept. 1, 1821. The following year, trade began in earnest. Becknell pioneered a new mode of transportation on the prairies by harnessing oxen to wagons.

For the trail’s first quarter century — until August 1846, when the U.S. Army of the West claimed New Mexico for the United States — Santa Fe was still part of Mexico. “Spain jealously prohibited its colonies from trading with the United States, so Santa Fe’s only source of manufactured goods came from markets deep in Mexico,” as quoted in “The Trail to Santa Fe,” a special section produced by the Santa Fe New Mexican on Nov. 9, 1986. “The closest trading center of any size was Chihuahua City, 600 miles and six months away via the Camino Real.”

On the Santa Fe Plaza, American traders from points east sold cloth, hardware, and other manufactured goods for Mexican silver, furs, and donkeys. There were people who made fortunes, but many others suffered hardships and even lost their lives.

Traders on the trail walked beside their wagons up to 20 miles a day. Quicksand, prairie fires, and windstorms were all hazards of the trek, but attack by Plains Indians was an ever-present danger.

In 1828, the federal government called in the military to defend the trail from Comanche, Kiowa, Cheyenne, Arapaho, and Apache raiders. Ultimately, the United States established a network of forts. One of the largest was Fort Union near Watrous. Now a national monument, it boasts centuries-old ruts from wagon wheels.

“Santa Fe Trail ruts are wide, grassy, and dish-shaped,” staff writer Sam Atwood penned in “The Trail to Santa Fe.” “In some places the trail branched into four or five ruts. Drivers did this so the breakdown of one wagon wouldn’t halt the entire caravan. Also, in case of attack, the parallel columns made it easier to maneuver the wagons into a defensive circle. And multiple lanes meant teamsters in the rear ate less dust.”

That characteristic, that wagons did not proceed in single file, is obvious in a 1989 map of trail ruts in Santa Fe.

The newspaper report said you could still see Santa Fe Trail ruts on the eastern edge of the city in 1986, but it added that “only this summer ruts were plowed under just outside Santa Fe to make room for a new housing development.”

Having Santa Fe Trail ruts on your property may present an obstacle if you want to build something there, but it’s a badge of cachet among those who esteem local history. “I would say it would negatively impact the value of a smaller lot,” said David Barker, owner of Barker Realty. “If it was on a very large property, it would be something of curiosity and interest and a very positive thing.”

“The city requires that all ground-disturbing activities within the southeast neighborhood be subject to an archaeological investigation,” Post said.

“The majority of the ruts on the 1989 map, and this is my speculation, date after 1846. There was a real bump in wagon traffic from that year to the beginning of the Civil War, then another one leading up to 1880.”