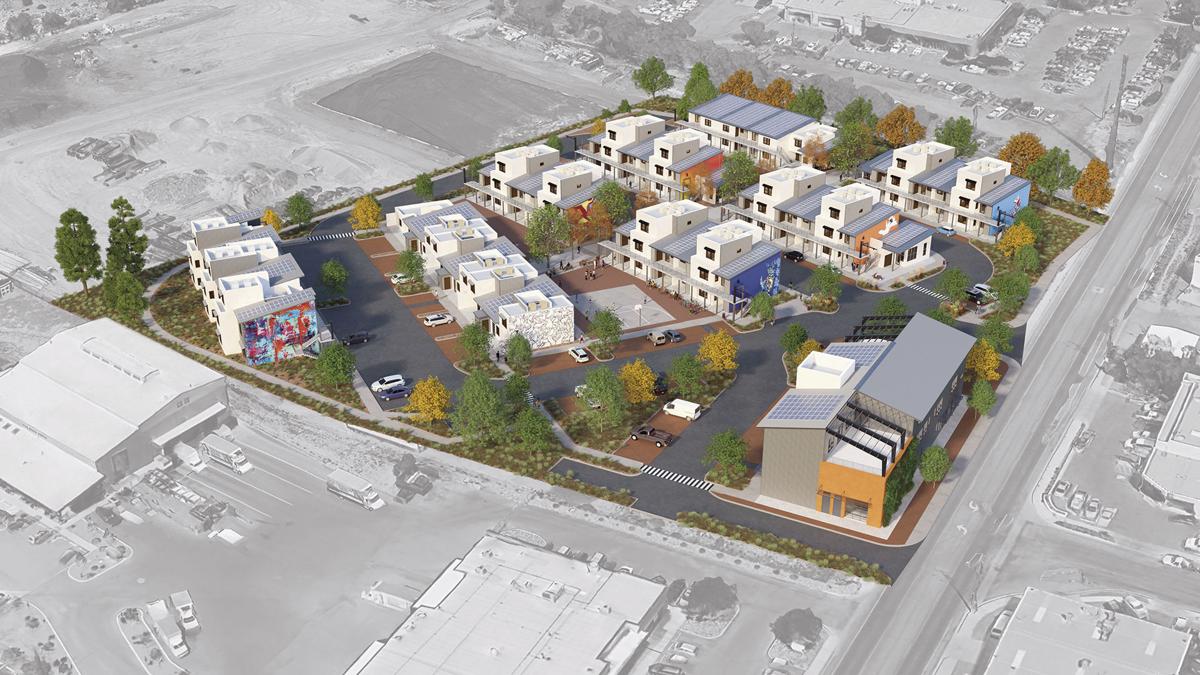 A cross-section of the Autotroph idea for St. Michael’s Drive 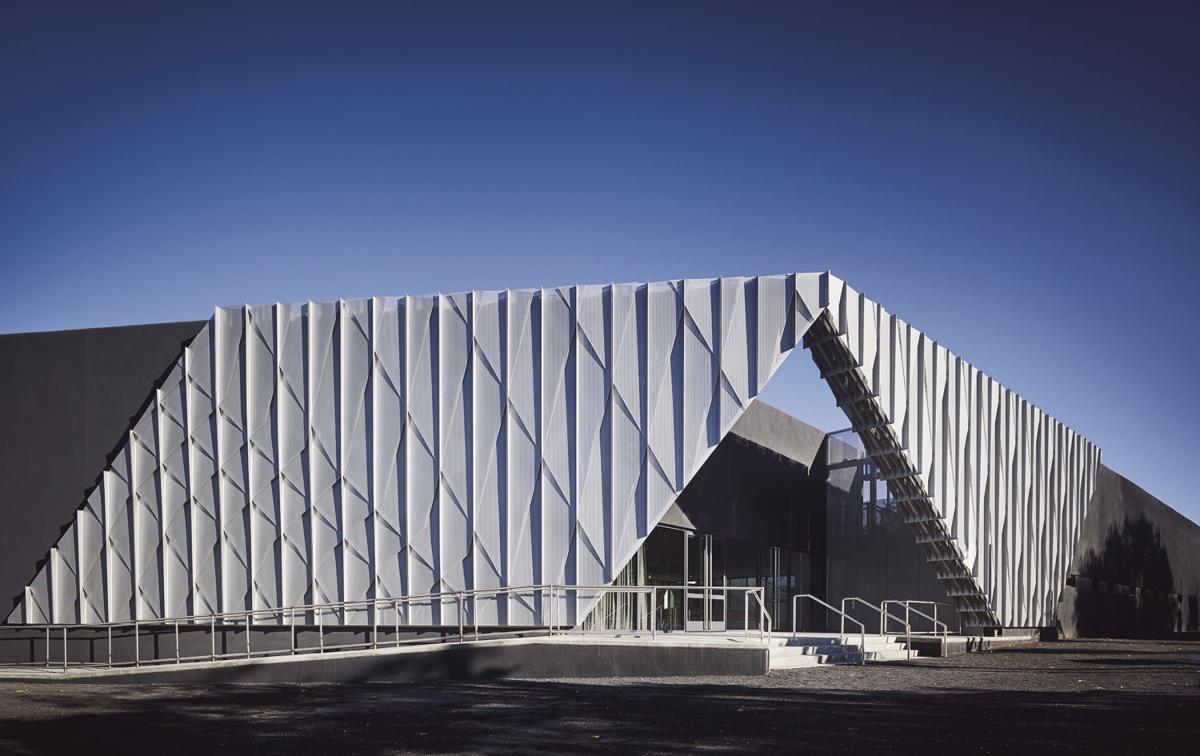 The prototype house at Laguna Pueblo in construction (above) and complete

The Laguna house finished and in use

A cross-section of the Autotroph idea for St. Michael’s Drive

The prototype house at Laguna Pueblo in construction (above) and complete

The Laguna house finished and in use

A proposal to build 65 apartments on Siler Road won one of two awards in the "Conceptual" category during last month's annual meeting of the American Institute of Architects-Santa Fe. The Siler Yard Arts + Creativity Center is proposed by AOS Architects.

The project involves the construction of eight apartment buildings and a community building on a parcel west of Trades West Road. It is designed in response to "urgently needed affordable live/work rental housing," said the AOS entry. And it is specifically designed for Santa Fe's creative population, with the units maximizing space and natural light for artists.

"We spent an extraordinary year of getting to know the full diversity of makers and creatives in Santa Fe and seeing how they're really in danger of being shut out of the community," said AOS Architects' Shawn Evans. "Santa Fe is known for arts and creativity, but very few of those people can afford to live here anymore."

The firm consulted more than 30 local artists regarding the project’s purpose and design. The buildings will reflect the neighborhood's industrial character, with some references to Santa Fe Style. There will be both flat roofs and sloped roofs, with exterior walls of both corrugated metal and stucco.

"One of the things that was real important to us as we designed the community is that it be authentic, not some trivialized version of Santa Fe," Evans said. He added that the Siler-Rufina district's industrial credential "is true, not some tarted up version of what we think tourists want to see."

AOS argued its case before the Santa Fe Planning Commission and was granted a variance in order to be able to use some contemporary-design materials in the buildings.

The land was previously owned by the city and has now been transferred to a nonprofit group called Midtown Housing Partners, an LLC between New Mexico Interfaith Housing and investors. "The city has waived all permit and development fees, and has given a sizeable cash contribution that will be used for roadways and utilities," Evans said. "This is really the only way that affordable housing is done in the United States any more is through low-income tax credits."

Part of the qualifying formula for those credits will be satisfied by the fact that the installation of the project's photovoltaic panels is being fund-raised through private donations. Because of the solar panels and the design and orientation of the buildings, Siler Yard Arts + Creativity Center is projected to be energy net zero. Evans said construction will begin this year.

Autotroph Architects won the other AIA award for unbuilt projects. The company's project, Pixelated Pueblo, is a planning study for a site on St. Michael's Drive.

This is the second year it was submitted. Autotroph principal Alexander Dzurec said the reason Pixelated Pueblo was recognized in 2019 is that the AIA awards jury includes members of the international design firm Bjarke Ingels Group (BIG), which he said "is all about theoretical, interesting projects."

The concept statement for the AIA entry noted that Santa Fe is in the midst of an "acute housing crisis." The entry bounces off a city initiatives to redevelop the St. Michael's Drive corridor, creating a Local INnovation Corridor (LINC) overlay district that presently is populated by strip malls, big box stores and vast, mainly unused, parking lots.

"Pixelated Pueblo is an evolution of other work we had done in the midtown area," Dzurec said. "We were involved in the weekend-long RE-MIKE event in 2012. We built a building out of shipping containers and worked with YouthWorks to do a portal, the whole objective about a different kind of paradigm of bringing the buildings up to the street instead of the parking lots we have now.

"Next, we were invited last year to propose some visions for the campus. We looked at redeveloping the perimeter of the site in terms of what the city wants to see: wood-frame construction apartments over concrete construction for retail."

The proposal design is based on the use of four standardized wood- or steel-frame modules that can be combined to create six building types. The community of blocky forms relates to traditional Pueblo architecture as well as to modern projects such as architect Moshe Safdie's Habitat 67 housing complex in Montreal.

Dzurec said Pixelated Pueblo could add 400 housing units on the 19-acre Kmart site. It would also involved renovating the large Kmart and grocery buildings for commercial and office uses. Between those and the new residential buildings on St. Michael's Drive would be two-level garages, partially underground, for 980 parking spaces. Above them are playgrounds and a public plaza for citizens patronizing the restaurants, bars, and cafés.

"This is what the city wants, having buildings on the street, hiding the parking, providing ground-level retail, and creating a walkable St. Michael's Drive," Dzurec said.

He did not offer a dollar figure for the project, but said it would be cost-effective because of the modular construction.

The 2019 AIA Honor Award was presented to SHoP Architects of New York for the SITE Santa Fe renovation and expansion. Santa Fe's Greg Allegretti was architect of record on the project, which was completed in October 2017.

The building was originally a Coors beer warehouse. In 1995, when it was 25 years old, the building was renovated to serve the contemporary art museum with the help of architect Richard Gluckman.

The recent project was similarly an example of adaptive re-use, which is considered environmentally superior to demolition and rebuilding.

The $7,128,000 project involved about 10,000 square feet in new or remodeled spaces. Among the changes are the experimental SITElab gallery, another climate-controlled gallery, an auditorium, and a new gathering space in the middle of the building: the Sky Mezzanine and courtyard.

The front of the enclosed part of the building was pushed out toward Paseo de Peralta and now includes a glass-fronted coffee bar, shop, and seating area.

But the most dramatic change was to the exterior. The architects created a triangular “prow” feature that cantilevers about 60 feet out from the building front. It is made of thick sandwiches of perforated-aluminum sheets having rhythmic joint patterns.

A similar, but shorter, prow is at the rear of SITE. The metal cladding extends from both prows some distance along the long side wall facing Santa Fe Railyard Park, terminating at acute angles — the metal forms thus appear as dynamically pointed parallelograms. Between them, the wall is stucco finished in a “midnight oil” color that SHoP has employed on several of its other projects.

The designs created by the edges of the aluminum panels were inspired by patterns in Native American rugs and pottery, SHoP project director Ayumi Sugiyama told The New Mexican at the time of the opening. “In terms of the concept for this cladding, we basically extruded, straight-up, a rhomboidal grid that you can picture as an egg crate, then we just carved away at the facade,” she said.

Sugiyama added that the fact that you can see the bolts when you look closely and can thus understand how the cladding is put together relates to “the honesty of materials” in the area’s history, which included warehouses and other railroad-related buildings.

The AIA jury selected an Archaeo Architects residential remodel and expansion project for a Merit Award. The 10,280-square-foot project was completed in July.

The client purchased two adjacent lots with two existing homes, a guesthouse, stables and swimming pool, according to the project statement. The larger home on the west lot was demolished and the home on the east lot was substantially remodeled, as was the stables into a garage and the guest house into a multifunctional studio.

"The pared down simplicity of the architecture allows the panoramic views to the north and the mature landscaping within the site to dominate," says the entry statement.

The jury commented, "With a beautiful palette of rammed earth, stucco, and large steel and glass windows, the existing residence is opened to the outdoors and new indoor and outdoor relationships are created. The wishes of the client for a contemporary residential compound have been achieved with elegance and exceptional restraint."

SpearsHorn Architects received a Citation Award in the annual AIA awards program held on Dec. 13. The firm won for Laguna House, an affordable house prototype built at the Pueblo of Laguna in 2017.

The house is 1,480 square feet of heated space, with another 700 square feet of covered outdoor space. Environmentally sustainable features include passive-solar siting, energy-efficient heating, photovoltaic panels on the roof, and a permeable-surface driveway.

The team looked at various floor plans and roof styles, and opted for an L-Shape house with parapet roof, a porch and a carport.

The walls were built using compressed earthen block (CEB) construction. After experimentation it was determined that the local soil on the pueblo was ideal, in terms of compression and stability characteristics, for making the earthen blocks.

James Horn, partner with Beverley Spears in the Santa Fe architectural office, described the wall structure. "We maintained one width of 14-inch-wide block with a concrete lintel at 10-foot height at the living area and 8 feet at the bedroom areas. Beyond the lintel are pre-manufactured trusses and a wood-framed parapet.

"We utilized the most accessible building materials and methods as possible — cold-rolled steel that rusts, stucco, concrete floors, solid wood cabinets with plastic laminate tops, plaster, sheet rock, and a spruce tongue-and-groove ceiling in the living area to add a warmth," Horn said.

"The Contract utilized as many community members as possible, so we interacted with workers from Acoma and Laguna Pueblos. It was a very rewarding experience."

Cecilia Rios, chairwoman of Santa Fe’s Historic Districts Review Board, is the 2019 recipient of the city’s Architectural Service Award.