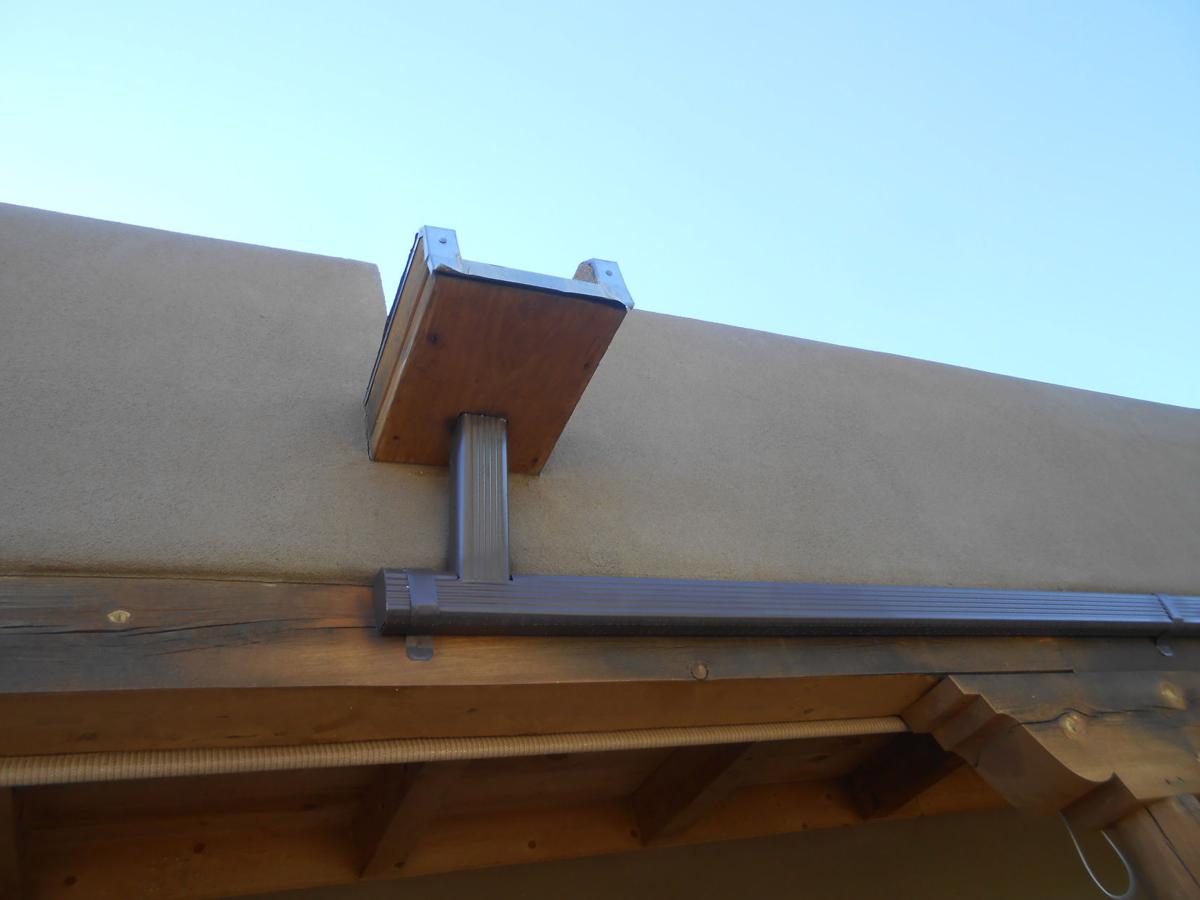 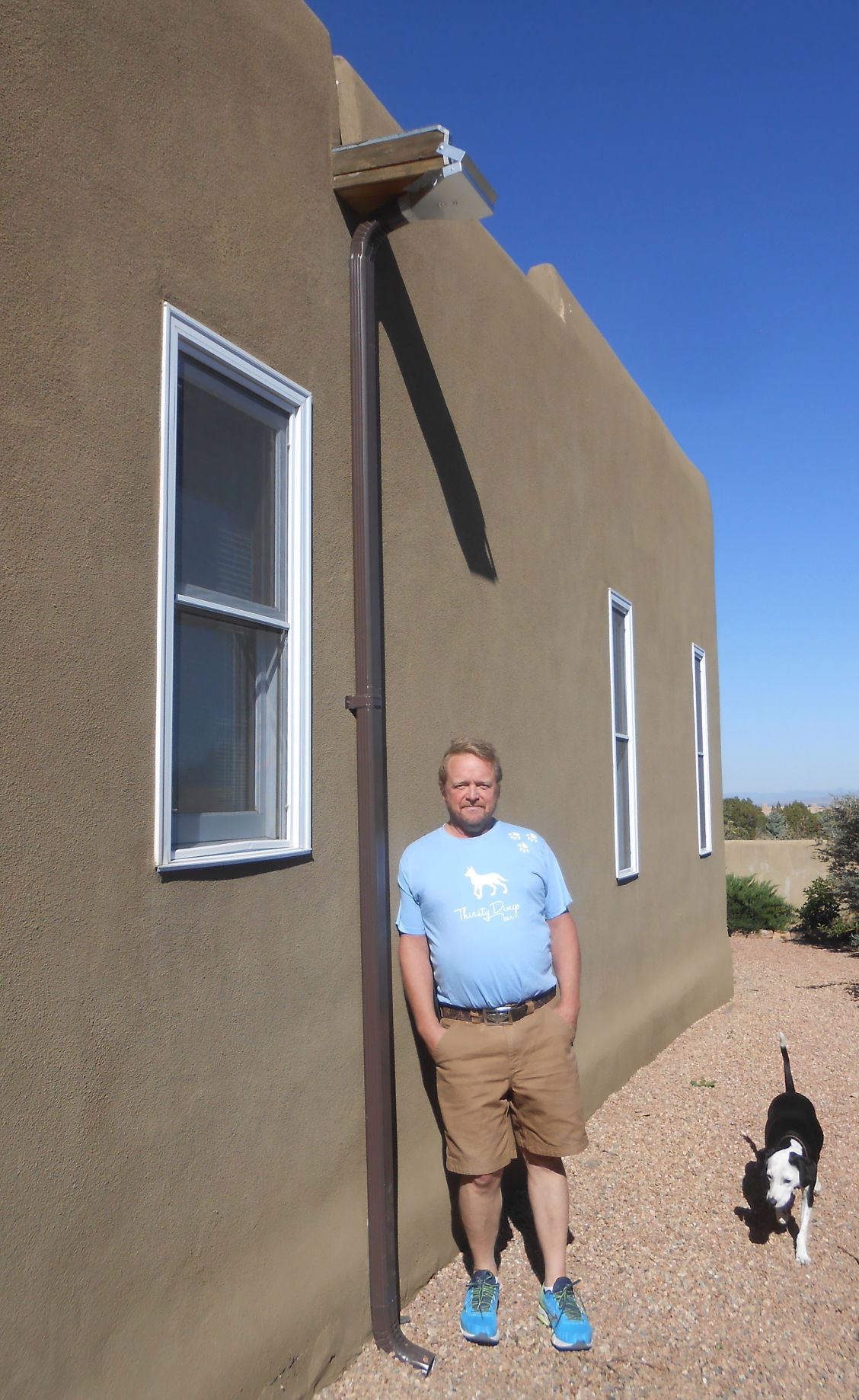 The inventor with a functional CanaleCatcher at his house 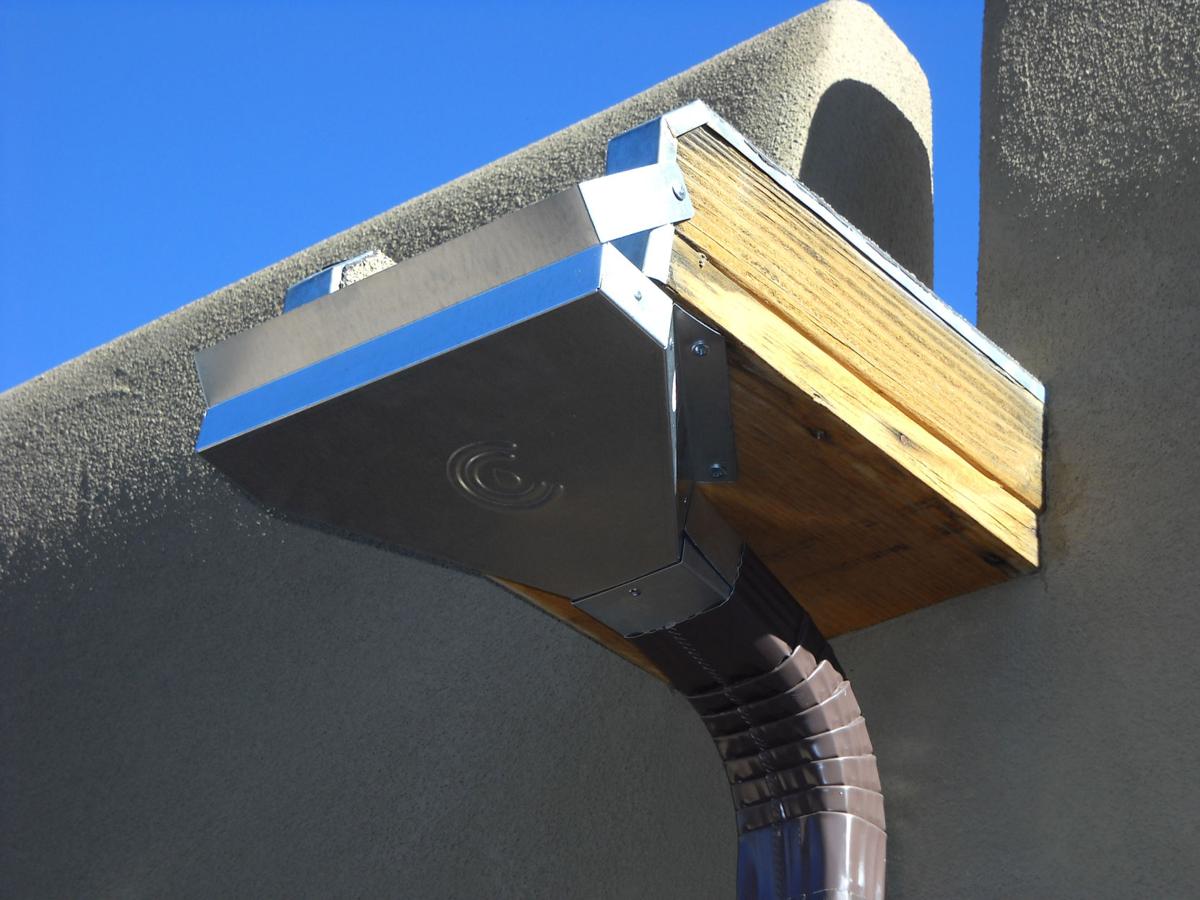 The better idea, now on the market

The inventor with a functional CanaleCatcher at his house

The better idea, now on the market

Canales, the rainwater drains projecting out from flat roofs on Santa Fe Style houses, may be traditional but they can also be a pain. The water can splash up from the ground to stain a wall or deck, and it may create pools that turn into dangerous ice in the winter. Santa Fe resident Brian Rees was bothered that one of his canales was staining a portal post at his Eldorado home.

When a friend of his father-in-law complained about a canale that drained into his patio, Rees realized he wasn’t the only one that had such problems.

“Look around and you can see that just about everybody has at least one canale that drains to where they don’t want it to drain. Maybe you have a canale that the builder put in right over a view window and you don’t want a rain barrel right there.” Also, you may have never had a problem until a reroofing job changed which drain has the greatest flow, and now you do.

About a year ago, Rees modified a couple of his canales. In each one, he cut a hole near the back, near the junction with the wall, in order to attach a conventional gutter downspout to the bottom. The idea was based on the fact that once you get the water draining into a downspout, you can pipe it to drain off to the side or around a corner, to drain into a rain barrel or stock tank that’s not right in front of your favorite window, or to drain into an area with a concentration of trees or other landscaping.

But there were glitches. It is relatively difficult to cut or drill a 2- or 3-inch hole in a canale. It’s a hassle getting the downspout to fit, and to try to seal it — in any case, it will probably leak before long. “Also,” Rees said, “you have to put a dam across the front of the canale to stop the water and get it to go down the spout. But that dam can back up water onto your roof: not good.

“I sat there with a glass of wine, thinking, There has to be another way, a better way to do this. I thought about it for a few weeks, then I started working with folding paper until I got to a point where I thought, You know, I think I can do this.”

The result is his invention called the CanaleCatcher. Not only is the contraption easy to install, but it’s not ugly. As it was being developed, he talked over the idea with his wife, Leonora Sanchez-Rees, and realized that it has to look good, too.At one point, he considered making them with molded plastic, but he instead chose galvanized steel. He bought some Harbor Freight metalworking equipment and set about perfecting the idea.

He modified the first design, so that the main body of the CanaleCatcher angles down toward the back — the first one caught the water from the canale and connected up nicely to convey it to the downspout, but it didn’t drain water completely because it was perfectly horizontal. He also monitored his pilot project in place on his house. “I looked at it in the winter and saw the icicles form, just to see if there was a problem.”

The final form of this patent-pending invention is now on the market. He’s having them made by an Albuquerque company and they look very professional, with no sharp edges and sporting a snazzy logo he developed with Cisneros Design, Santa Fe.

The CanaleCatcher goes on in about 15 minutes with a few self-tapping screws.

There are three sizes. The most common, including in Eldorado, is 11 inches wide. He also created specially modified versions for 8-inch and 6-inch canales, which are common in Rancho Viejo and other areas.

Detailed measurement and installation instructions are available at www.canalecatcher.com.