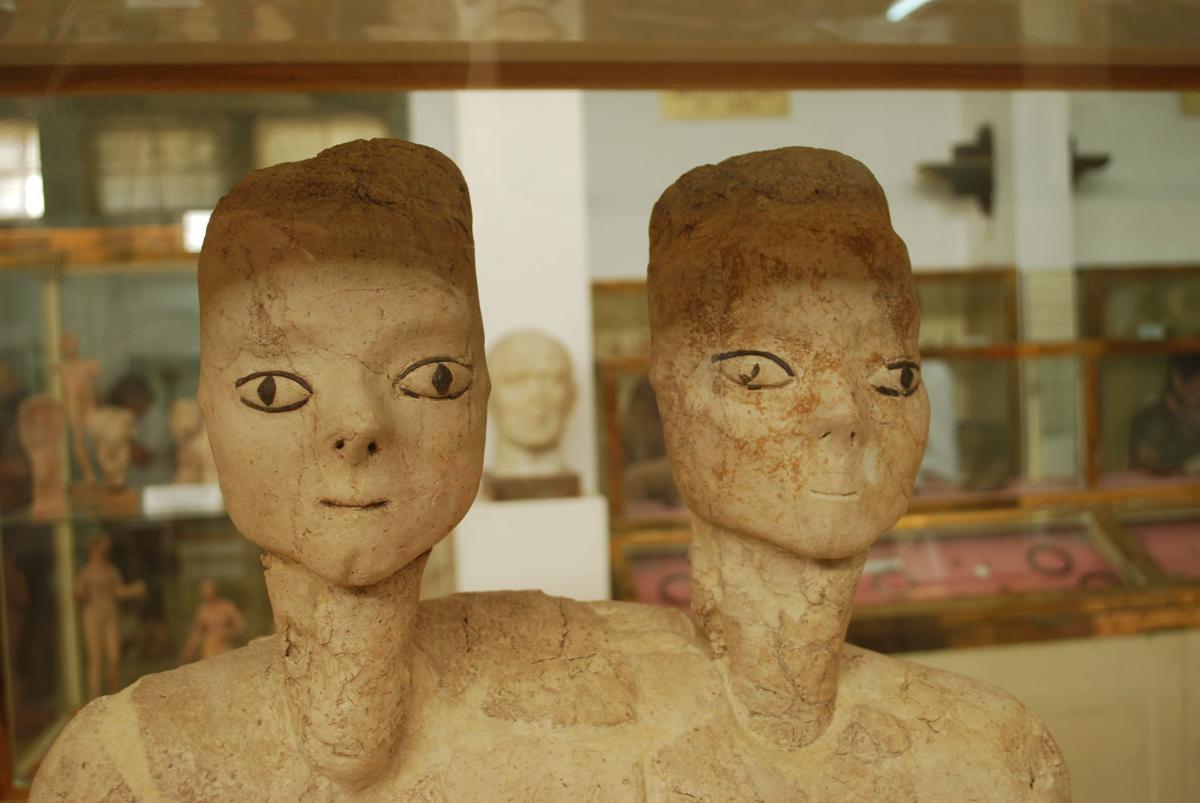 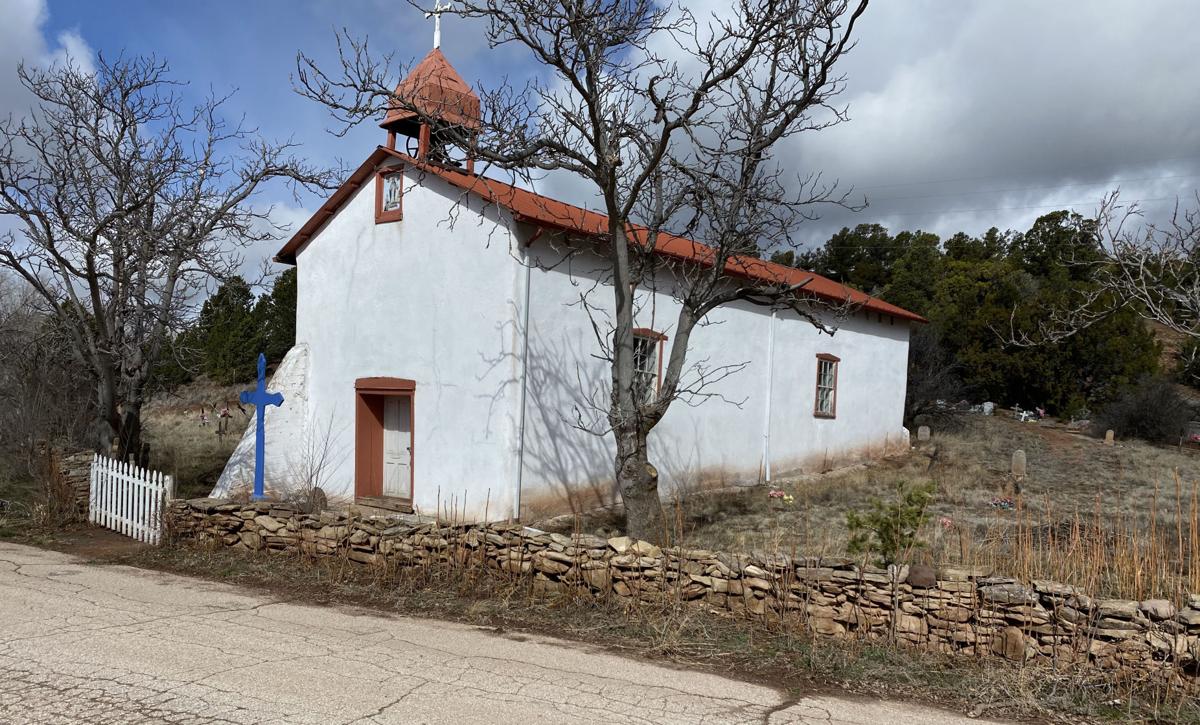 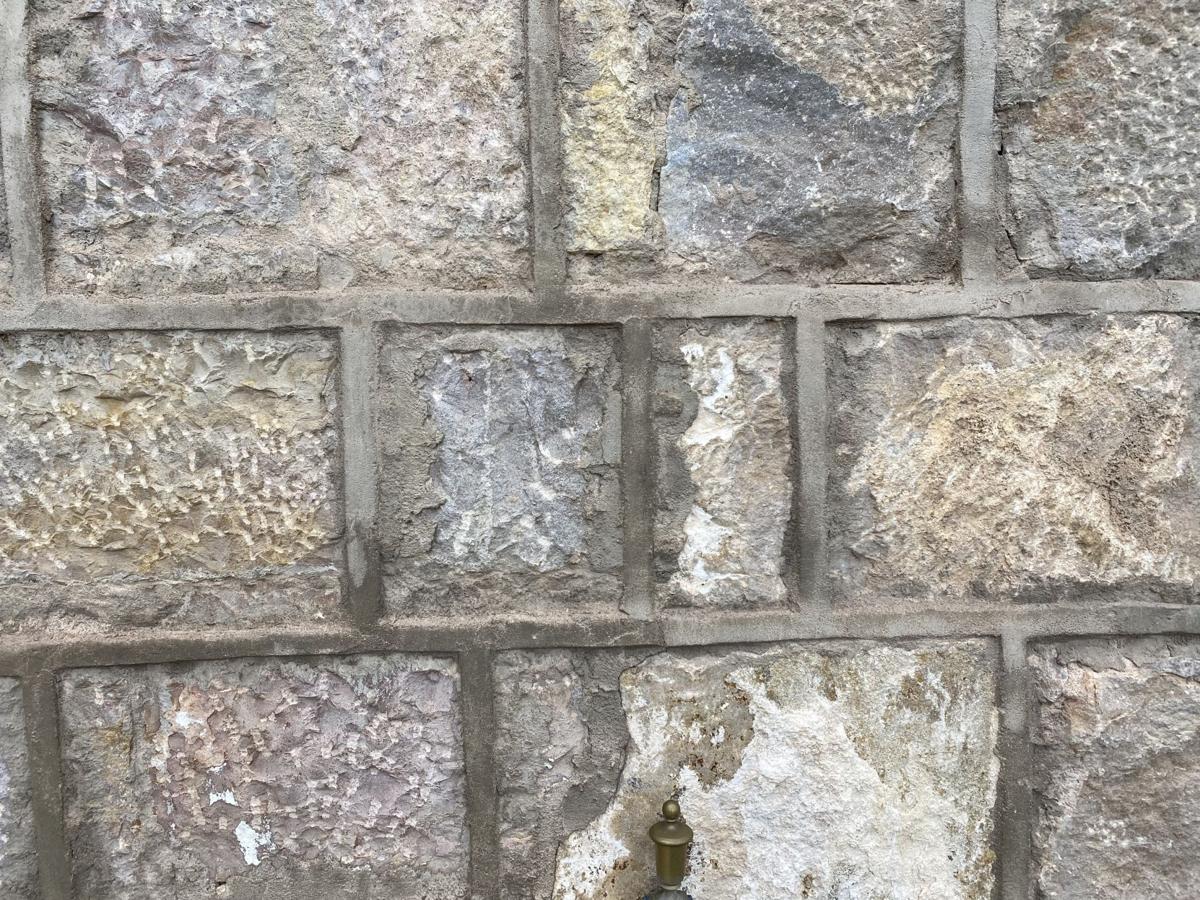 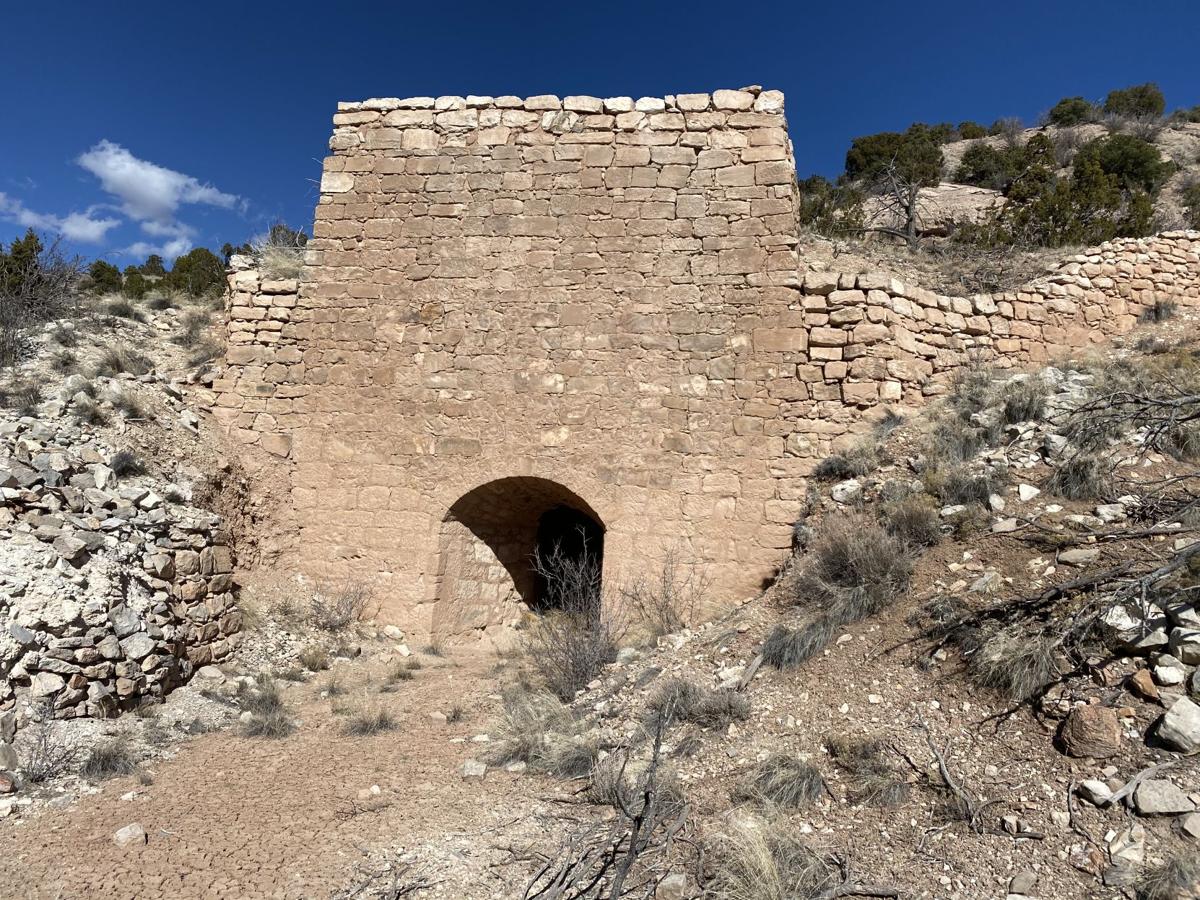 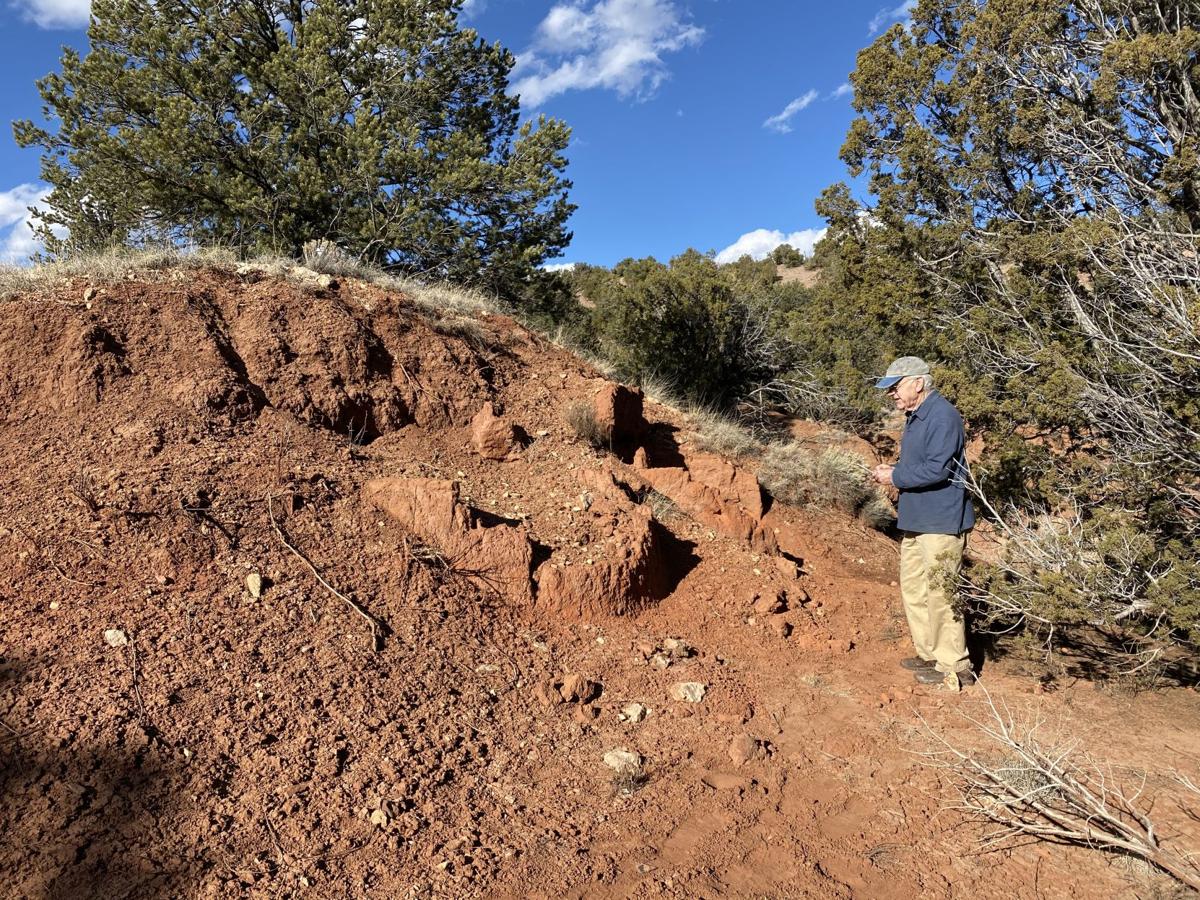 Even in the adobe-rich culture of Santa Fe, Portland cement has dominated construction for more than a century. But, for mortars and plasters, another material ruled between the days of traditional mud and modern cement: lime.

After the coming of the Americans in 1846, lime gained popularity over erosion-prone mud. It was popular for plasters and for mortar in ashlar construction until the arrival of Portland cement after the railroad reached Santa Fe in 1880, although there are not many mentions of cement or concrete until the first decade of the 20th century.

This first instance of the term “cement stucco” in the archives of the Santa Fe New Mexican appeared on July 10, 1907: “Work is progressing rapidly on the construction of the Mary James Presbyterian Mission School, which is being erected a short distance north of the Federal building. The wall timbers are now in place. The exterior walls will be of cement stucco.”

But in the second half of the 19th century, lime was king. It was used as mortar between the stones at the Cathedral Basilica of St. Francis of Asissi, Loretto Chapel, and the U.S. Courthouse, and probably also at the Church of Holy Faith, the Catron Block, and the 1851 Oliver P. Hovey House on Grant Avenue.

“I have seen the original lime plaster exterior surface that was painted to look like brick,” contractor Alan “Mac” Watson said about the Hovey House. “It might well be the first use of lime in Santa Fe.”

Lime technology involves a series of steps. First you burn chunks of limestone in a hot kiln. The resulting quicklime is very caustic and potentially explosive with moisture. “In old engravings of masons, you’ll see guys wearing eye patches,” Watson said, “because if a piece of that quicklime hits the moisture in your eye, bang! it just burns your eyeball out.”

The second major step in the process was to “slake” the quicklime in water to produce lime mortars and plasters.

“It’s a fairly sophisticated process,” Watson said. “It’s useful because it’s a material that is a solid that can be turned into a plastic material and then returned to a solid state.”

The technology can be traced back at least to Neolithic times at the end of the Stone Age. In the 1980s, more than a dozen human statues — some of them two-headed — were discovered in Jordan. The lime-plaster figures survive from the 9,000-year-old farming settlement of ’Ain Ghazal (Spring of the Gazelles).

Watson said that all the Mayan sites in Mexico were done with lime plasters and mortars. “The Spanish knew about it when they arrived in New Mexico, but it was already in place in Mexico. As far as I know, it never got further north than Ciudad Juarez until the Americans showed up. The first evidence that I know of is out at Fort Union, which was established in the 1850s. There are two kilns over there.”

Although masons today use small amounts of a relatively inferior product called hydrated lime in their cement mixes to add plasticity, lime in its pure form is not routinely used for mortar and plaster on buildings, except in preservation work. Contractors like Mac Watson and Edward Crocker who have done a great deal of work on historic buildings in Santa Fe do employ lime in repair work. They’re also fascinated with locating historic lime kilns and slaking pits.

In 2011, a three-century-old slaking pit was discovered next to the cathedral during city-required archaeological testing in advance of the Drury Plaza Hotel construction. “I concluded that the lime slaking pit dated to 1717, and was probably used during construction of the second parroquia [parish church] in that year,” said James L. Moore, Museum of New Mexico Office of Archaeological Studies.

Crocker said that the longer lime “has been run into a putty and kept moist, the more plastic and well-behaved it is.” The quality of lime increases the longer it slakes, and there are accounts of master craftsmen who would only use material that slaked for decades.

Craftsmen dug slaking pits near the buildings on which the lime would be used. On the other hand, lime kilns were built at sources of limestone. There were several close to Santa Fe and one was in front of the cathedral, Watson said. “The most sophisticated lime kiln I’ve seen in New Mexico is near Montezuma Castle and the lime was probably used for the castle and the Plaza Hotel and other buildings in the Las Vegas area.”

Sometimes, kilns were far from the slaking pits. One example is the Lamy Lime Kiln, a feature that is identified by name on an 1883 map of Santa Fe County. Twenty years ago, an enthusiastic and hard-working young man named Abe Shaffer renovated that large kiln. Shaffer was an intern with Cornerstones Community Partnerships and subsequently worked with Crocker Ltd., the Santa Fe-based architectural conservation and historic preservation firm.

“Abe had made friends with (historian) Marc Simmons,” Watson recalled. “In the summer of 2000, Abe and Marc and my wife and I went up to Lamy looking for the old lime works and by some kind of miracle we found it. It was really exciting.”

Shaffer spent two years restoring the kiln. Crocker wrote about it in one of his “Understanding Adobe” columns for this magazine in 2003.

“The kiln he restored was the starting place for the mortars that bind the ashlars and quoins of the St. Francis Cathedral, provided the fine, plastic material that is the plaster in the Loretto Chapel, and that was used to form the moldings and archivolts in both buildings,” wrote. “It made its way north and was undoubtedly the source for the mortars and plasters in the shrine of Our Lady of Lourdes in San Juan Pueblo. It was used in many of the remaining historic buildings on the East Side of the Plaza and in many more that are long gone.”

The research conducted by Shaffer and Simmons led them to an amazing find from the Turquoise Mining Museum and Petting Zoo in Los Cerrillos. “There, for sale, are hundreds of old documents... (that) were used as insulation beneath the floor of the Brown & Manzanares office next to the Castañeda Hotel in Las Vegas. During a remodel they were discarded again and scavenged from a dump for sale in Cerrillos. Enter Marc and Abe who recognized the bookkeeping pertaining to the operation of the kiln.

“Abe conscripted family and a few friends (no attrition, amazingly) to move many, many tons of fill from the mouth and interior of the conical building,” Crocker wrote. “He spent months on scaffolding re-pointing the joints of the stone masonry... The restored building is impressive; the stone masonry inside and out tight and intact and towering over the arroyo bench by some twenty-five feet.”

Watson guessed that 90 percent of the kiln was intact when he first saw it. He complimented the “nice masonry work done by Quintien Monier and William Colloudon,” two builders who were also involved in the Loretto Chapel and other Santa Fe building projects in the late 1800s.

When Shaffer was finished with his work repairing the kiln, he did one firing. “I think he just went up and gathered rocks up the hill and put them on top of his fire,” Watson said. “Part of the design of the kiln is to get something that drafts like crazy because you’re trying to create a pretty intense fire, so you keep feeding it. Abe did his firing for 24 hours.”

During a recent visit to the area, Watson trekked up an arroyo to four other, very primitive, small kilns about a mile northeast of the Lamy Lime Works. “I think this site that’s identified as Manzanares on the old county map was a camp for the railroad workers,” he said. “I have a hunch that the lime was used to build abutments for railway bridges up in Apache Canyon.”

Scouting out good limestone sources was key to lime technology. One glimpse into Santa Fe’s history comes from a moment during a 1964 interview with the sculptor Eugenie Shonnard. In the session conducted by Sylvia Loomis for the Archives of American Art’s New Deal and the Arts Oral History Project, Shonnard spoke about finding limestone and clay on Cerro Gordo.

“It’s located at the top of the steep part of Gonzales Road, where limestone was quarried for such projects as the first phase of the federal courthouse,” Watson said. “Beneath the limestone layer was a layer of clay that was used extensively for the brick making and later the hollow-tile making that took place at the [territorial] penitentiary. The neighbors called that place ‘El Cerro de los Presos,’ as prisoners worked up there digging the clay and loading it onto wagons and carting it off to ‘La Pena’.”

That hollow tile, also known as “pentile,” was a favorite building material of the renowned Santa Fe Style architectural designer John Gaw Meem from the 1920s and into the 1940s.

Lime plaster bonds well with stone — the rougher the better — but what about using lime plaster on an adobe building? In one of his “Understanding Adobe” columns in this magazine in early 2009, Crocker wrote that lime and adobe are only moderately compatible and that old-timers employed a rajuelar technique that is no longer affordable because of the labor involved.

“The term rajuelar is a Spanish verb connoting the application of stone, or rajuela,” Crocker wrote. “The application in this case is of small, spatulate, preferably angular and permeable pieces of rock in the mortar joints between the adobes. With the rajuelas protruding, say, three-quarters of an inch beyond the vertical plane of the wall, an effective lath was created. The embedded stones supported the lime plaster.”

Another aid to the adherence of lime to adobe is the wetting of the adobe immediately before application, Watson added. This was the method employed at the historic church in Cañoncito.

“We did the lime plastering on Our Lady of Light when I was working for Cornerstones in the mid-1990s,” he said. “It’s one of the few structures in Northern New Mexico that I know of that has been coated on the outside with lime plaster, and it’s held up pretty well.”