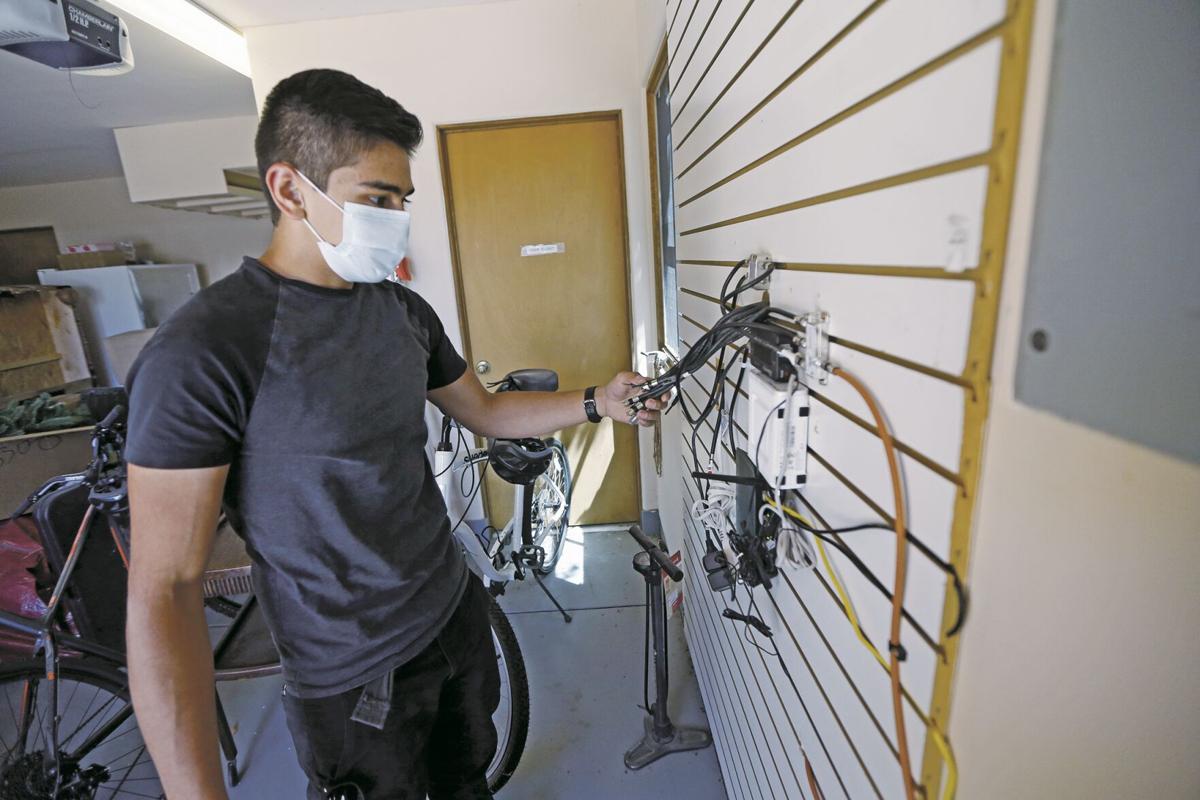 Anthony Vigil, with A Sound Look, tidies up a modem, routers and an adapter to turn coax lines into ethernet lines at a home in Las Campanas on Thursday, April 8, 2021. Luis Sánchez Saturno/The New Mexican 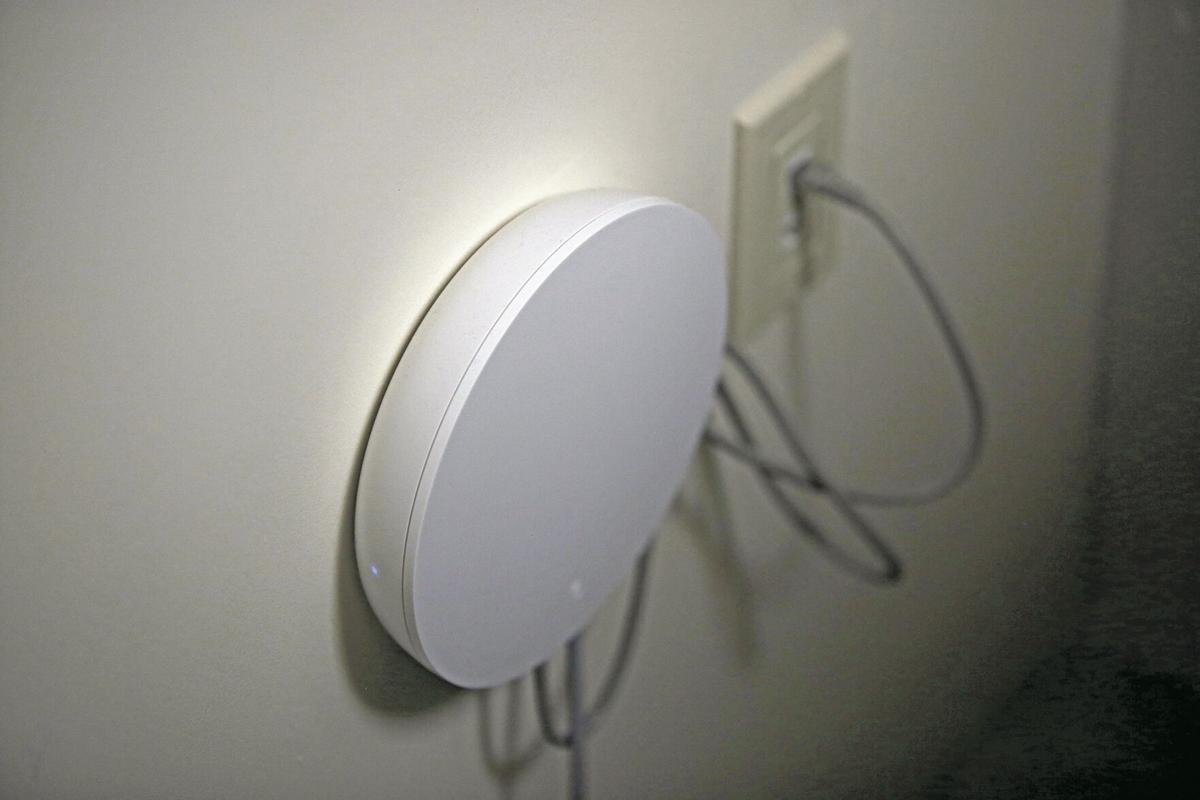 Anthony Vigil, with A Sound Look, tidies up a modem, routers and an adapter to turn coax lines into ethernet lines at a home in Las Campanas on Thursday, April 8, 2021. Luis Sánchez Saturno/The New Mexican

Technology. People have such a love/hate relationship with it.

We need it, we rely on it, but it’s riddled with challenges many don’t understand and can’t overcome. Santa Fe is particularly vulnerable to technological misery, the kind caused by one of the city’s most valued materials – adobe.

Adobe walls, sometimes several feet thick, may be attractive and effective at moderating a home’s temperature, but they do an equally fine job of blocking the most ubiquitous of modern technological needs — the Wi-Fi signal. Beaming a wireless signal from one end of an adobe home to the other can prove a challenge but is increasingly necessary.

As more creature comforts are operated wirelessly— electronic shades, watering, audio/visual and security systems plus climate control, to name a few — and more of us work from home, the need for a reliable signal has skyrocketed. Old homes were not wired with the modern cabling necessary to service these features, and the cables themselves have changed drastically in the past 20 years.

With smart home elements ever evolving — and reliant on a good signal — how does a homeowner incorporate some tech savvy without tearing into solid adobe walls?

In 1993 he launched A Sound Look. “I started off selling televisions and stereo equipment,” he says. As technology evolved, so did his business, eventually becoming a low-voltage contractor and smart home integrator.

“One thing tied to another, so then we were doing lighting control and security networks,” he says.

Through the years, Pascual has learned a variety of techniques to service the array of disparate, or nonexistent, home wiring situations. Before he can install Wi-Fi devices, the home must have internet service. In the case of an old adobe, especially a historic one with no original wiring, preserving the integrity of the walls is paramount. Pascual flexes according to the homeowner’s preferences.

“It’s a matter of what they’re willing to undergo to get access to the internet,” he says.

If it wasn’t wired, is there a possibility to run wires? If it’s a matter of bringing the service line into a house that wasn’t wired, Pascual notes he will have to breach a wall somewhere. “Sometimes we run cable on the roof and use access points that penetrate the roof,” he explains. Once that line is dropped into a room and the Wi-Fi is set up, it’s a matter of how far the signal reaches and whether another line needs to be brought in.

In worst case scenarios, in the interest of minimizing penetrations and equipment, he says, “it might be a matter of accepting wired internet in some rooms and Wi-Fi only in specific spaces.”

If the home was wired with phone lines, there may not be a need to penetrate a wall with a new cable. “There are devices out there we can use to convert the signal through an existing, old telephone line,” he says. “It converts it to a two-wire network, and then we put a network access on top of that. But the speed is limited.” It’s not as efficient as a high-tech cable, but it’s an elegant solution for using what’s available.

The next challenge is transmitting the signal throughout the house. Older homes tend to have more traditionally divided living spaces, meaning more walls between the wireless signal base and the most distant room. Pascual works methodically, installing a series of signal bases, ensuring the Wi-Fi signals overlap to eradicate any dead spots.

Once the interior equipment is installed and tested, if the signal still isn’t up to par, the problem may lie elsewhere. This is true for framed homes as well. If after installing all the right gear the wireless signal is inconsistent or weak, it may be the service provider.

Over the years, Pascual has contacted internet service providers on behalf of his customers to report poor signals and has often been dismissed. “The provider might insist it’s fine,” he says, when in fact it’s not.

Pascual invested in a specially designed meter to test the signal from the source, before it enters the house and is drawn upon by users. “We put a monitoring device on, which shows average service speed download and upload, any major drops, and the consistency of the internet,” he says. “That gives us tools to go fight the service provider.” Depending on the outcome and the options available, his customers may elect to switch providers.

For adobe dwellers longing for better wireless signals, there are options. It’s all a matter of evaluating each individual home, setting realistic expectations and, maybe with the help of a low-voltage partner, creating customized solutions.