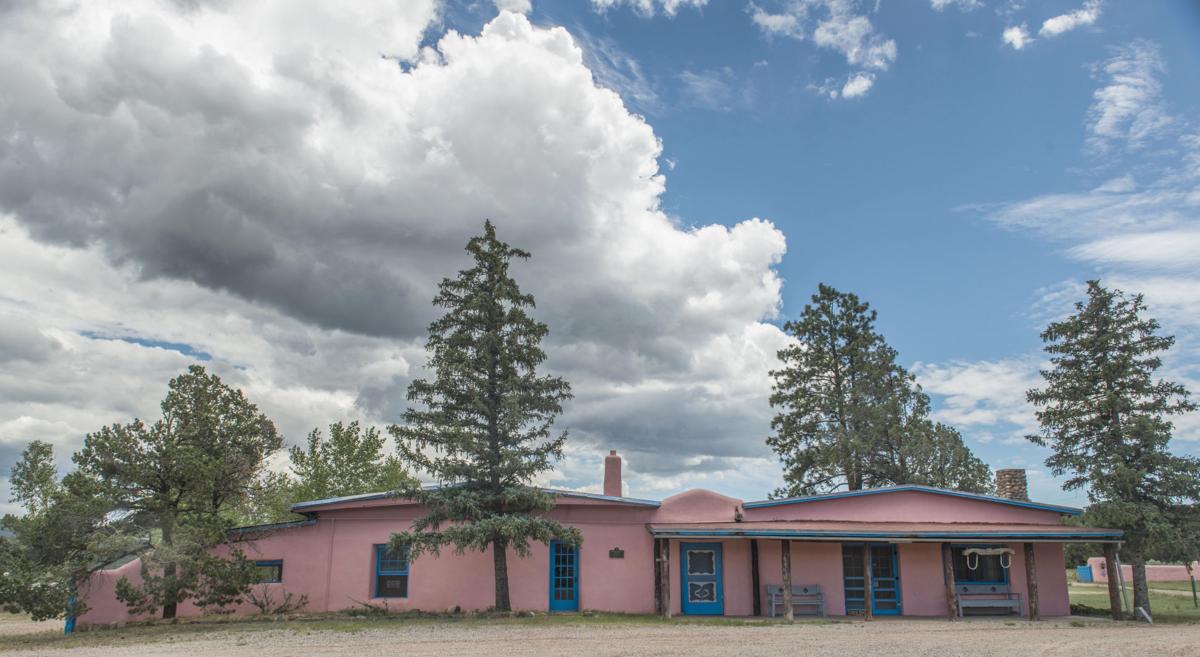 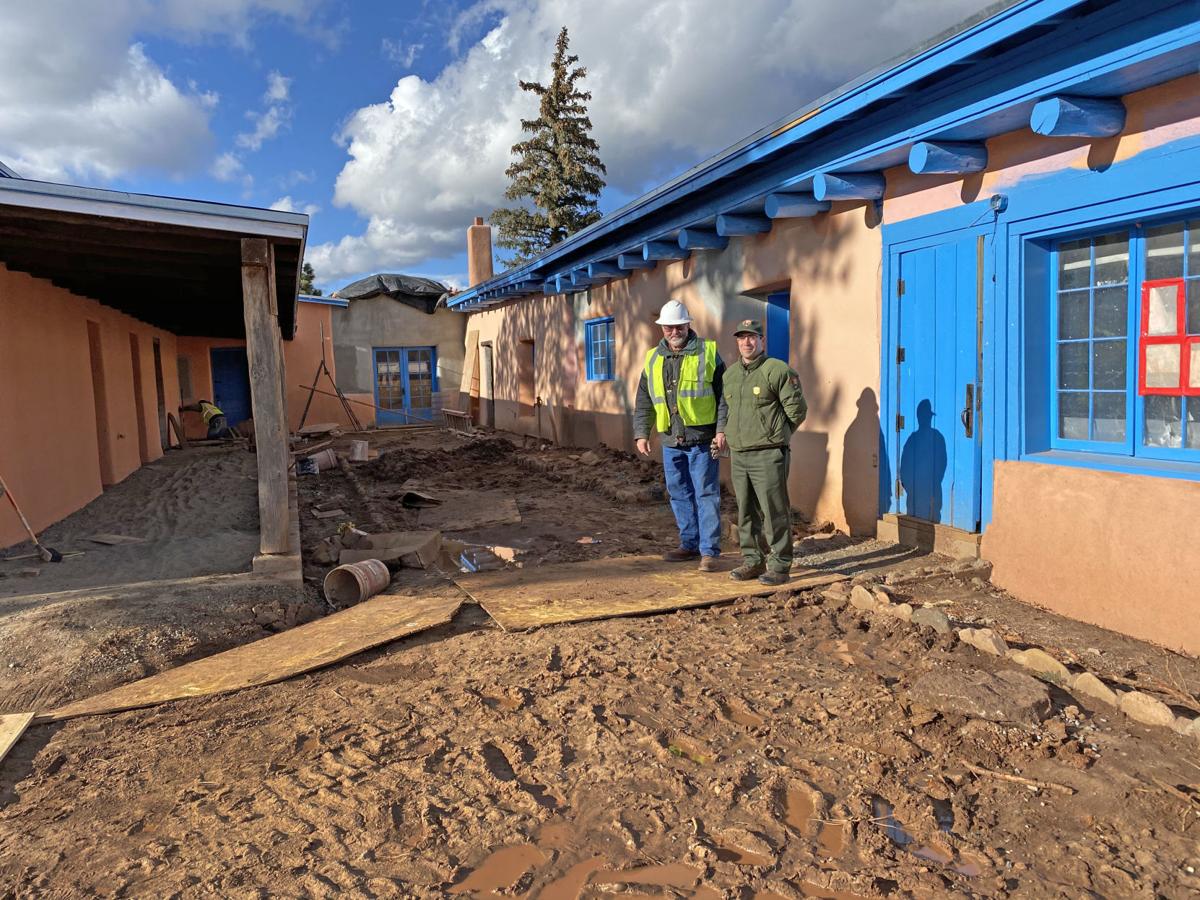 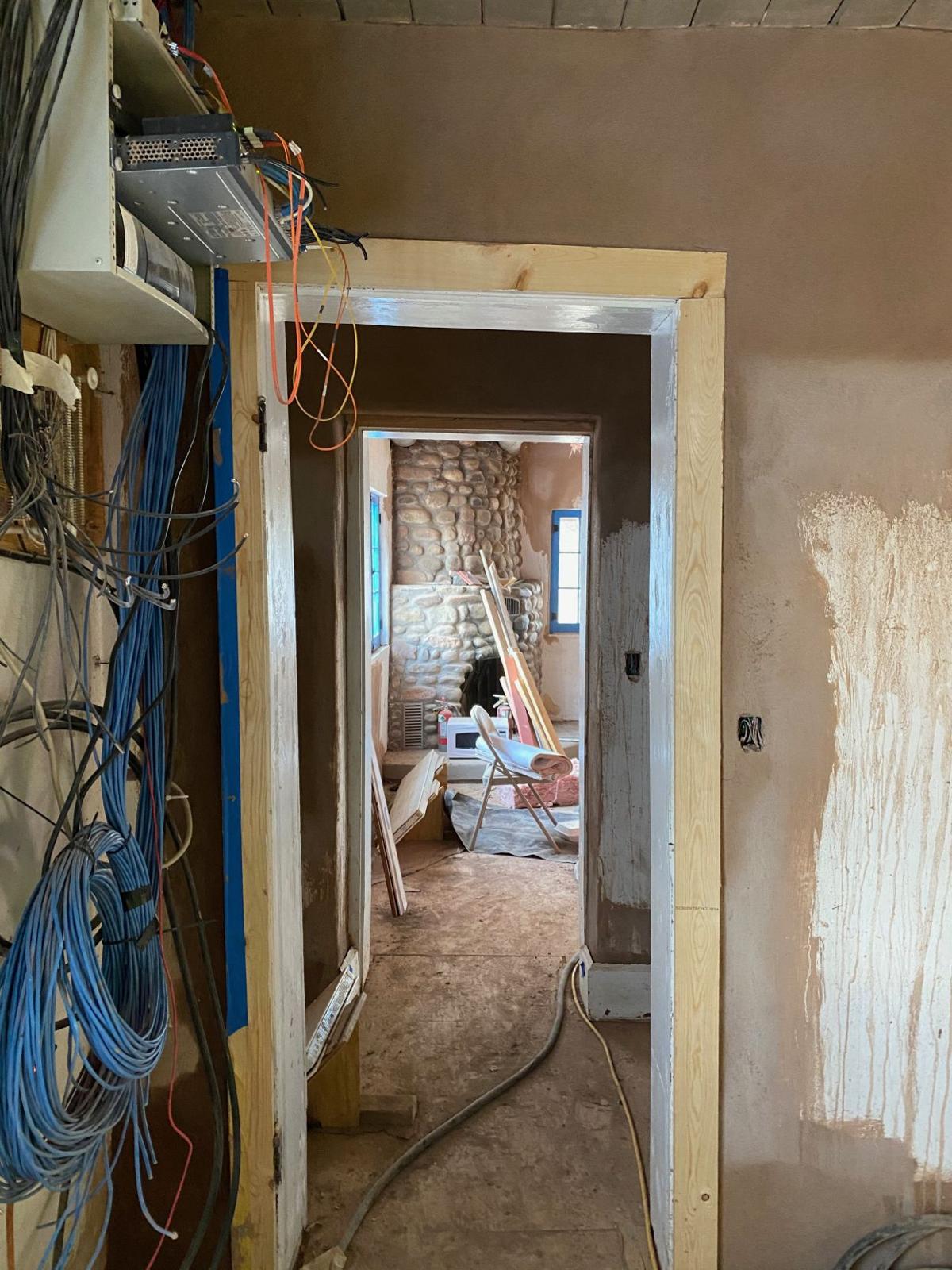 Work ongoing inside the old stage stop and trading post 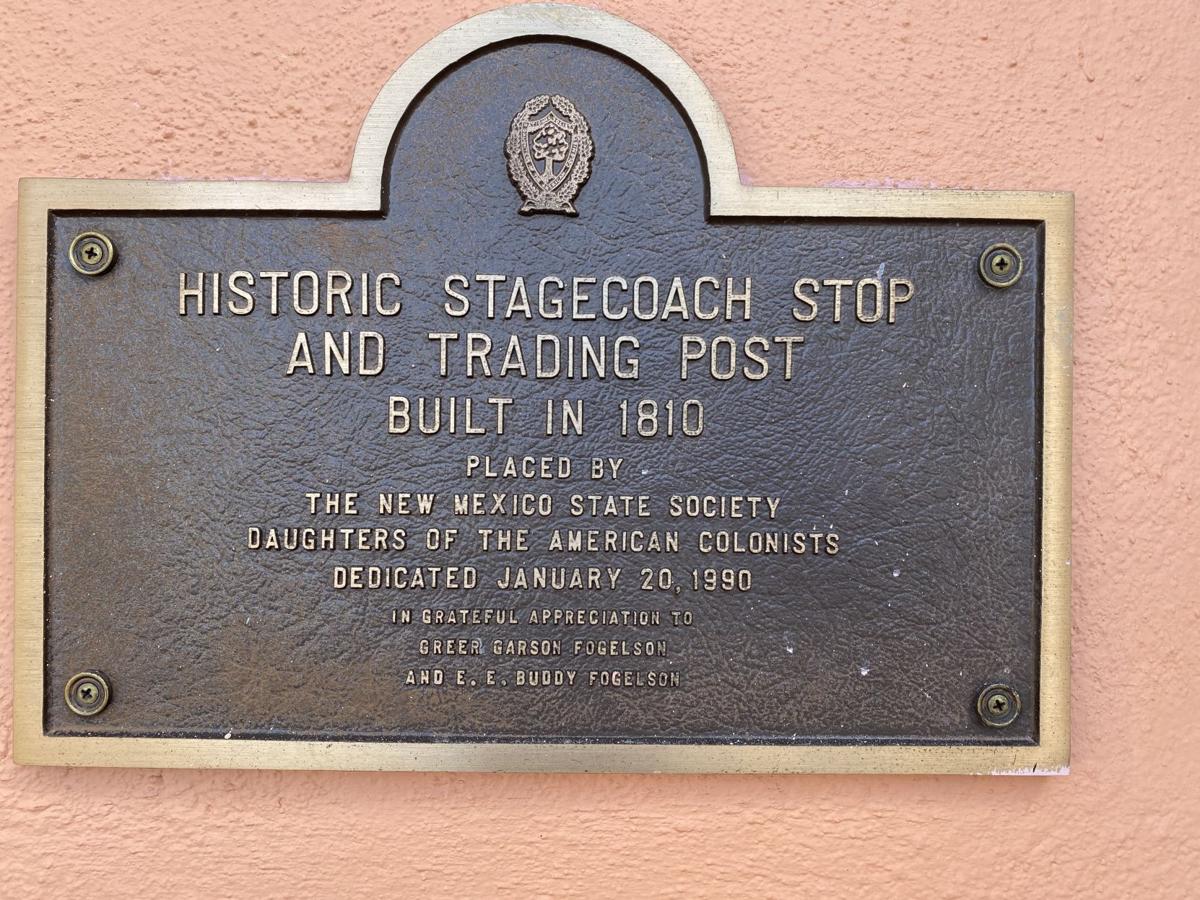 Plaque on the front of the building 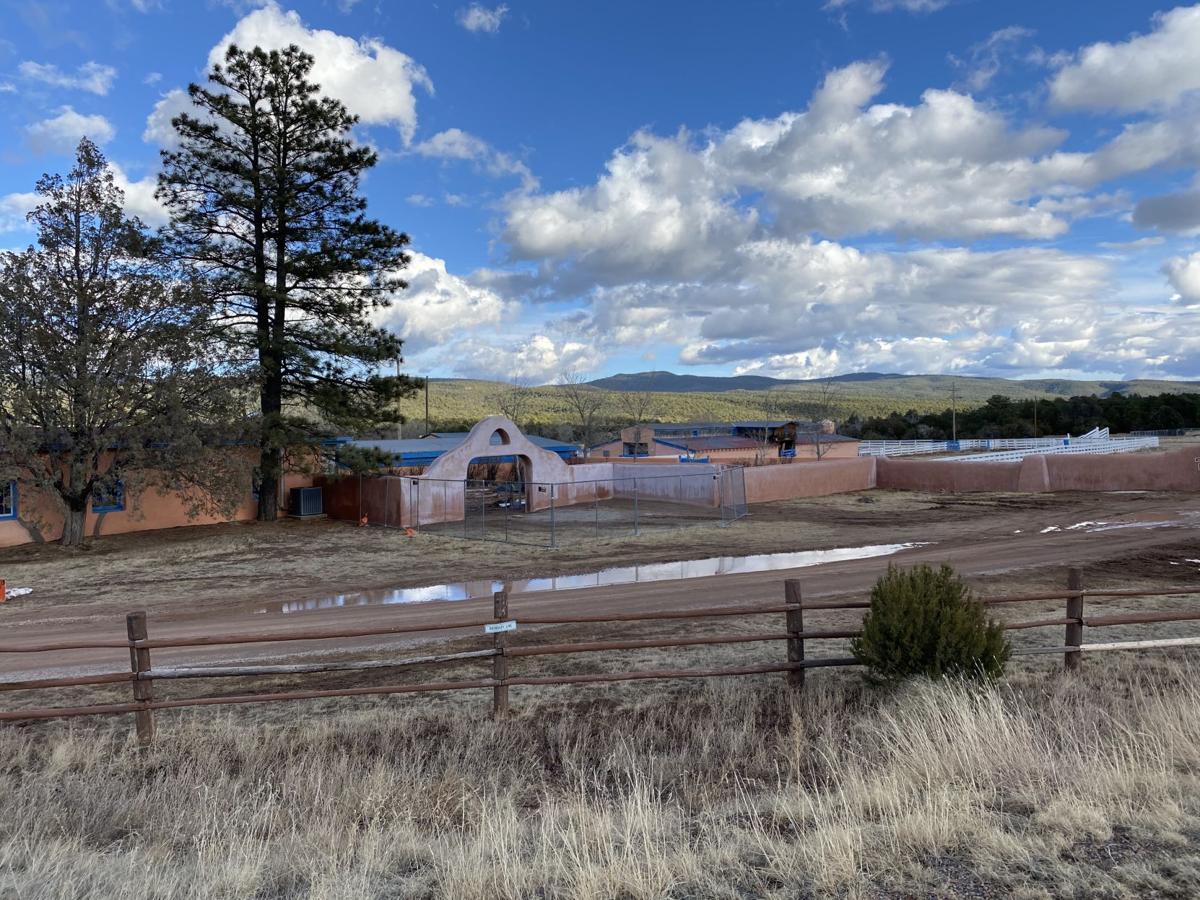 A view of the Kozlowski outbuildings and corrals

Work ongoing inside the old stage stop and trading post

Plaque on the front of the building

A view of the Kozlowski outbuildings and corrals

One hundred and fifty years ago, it was the heyday of the Santa Fe Trail. Each year, thousands of wagons loaded with cloth, garments, tools, and other items made the trip from Independence, Mo., to Santa Fe. One of the last stops on the nine-week journey was Kozlowski’s trading post near the ruins of Pecos Pueblo. People who made the long trip reportedly found a bit of heaven there, including fresh-caught brook trout from Glorieta Creek just 200 feet north.

The old adobe building has been vacant for 15 years, but it will see new life when a rehabilitation project is complete. Pecos National Historical Park was awarded funding to rehabilitate the historic trading post along N.M. 63 in Pecos.

“This is a rehabilitation project,” said archaeologist Jeremy Moss, Pecos National Historical Park chief of resource management. “There will be interpretive exhibits that will focus on the Santa Fe Trail, Civil War, and Western ranching. We won’t have artifacts, because we can’t ensure security and climate control enough for that.”

Moss said he has looked for archaeological evidence of Native presence, including using ground-penetrating radar during recent work at the site, but has turned up very little.

“We found one arrowhead, but that could have been picked up. People were going over to the mission. That was part of the draw: “Let’s go check out the ruins,” and they’d bring stuff back. So it’s hard to say.”

Another possible link with the park is the existence of adobe bricks that may have been salvaged from the 1717 mission church there.

The east wing of the old trading post is the older half; a west wing was added by rodeo promoter Tex Austin in the 1920s. A testament to the building’s age is a back room showing jacal construction: upright poles, some with the bark still on, and mud.

A plaque on the front of the building says, “Historic stagecoach stop and trading post built in 1810.” That date is debated, Moss said, but the building “was definitely here in the 1850s.”

Its history, according to the National Park Service, dates to 1858, when the Polish immigrant named Martin Kozlowski either built it or took ownership of an existing structure. That year, he obtained permission from Archbishop Jean-Baptiste Lamy to remove timbers from the roof of the nearby church ruins and used them to expand his facility with corrals and out-buildings.

During the Civil War Battle of Glorieta Pass, the trading post served as a Union Army headquarters and hospital. Apparently Kozlowski’s enterprise thrived until 1880, when commerce shifted to the newly extended Atchison, Topeka & Santa Fe Railroad.

In 1925, entrepreneur Tex Austin purchased the old building and turned it into a headquarters for his Forked Lightning Ranch. Then, in the 1940s, E.E. “Buddy” Fogelson bought the ranch and he and his wife, the actress Greer Garson, worked the land as a hobby ranch and entertained many famous guests there.

In 1990, the National Park Service acquired the trading post and used it as office space, until 2006, when the building was deemed unfit for occupancy.

The current improvement effort began in February 2019. “We’re doing some adobe rebuilding,” said Kirk Woodruff, project superintendent for Weil Construction, which has partnered with Avanyu General Contracting and Pat Taylor Historic Preservation. He pointed to work on the interior of the adobe walls, which were plastered with lime and gypsum, then painted. Replacement adobes were made with local soil, but the bricks used for the exterior walls were stabilized adobes.

“We tried to leave as much original intact as we could, but it’s challenging because we have to have fire-suppression and heating systems. We had to knock out the old plaster and a little bit of adobe to get the pipes in there, and also to wire for door sensors and motion sensors.”

Most of the doors in the trading post are original. However, few have been widened for handicap access. This was done by widening the hinge stiles on those doors.

“This older wing had a dirt roof. It was originally a flat roof on adobe, I’m assuming, and at some point they put a slightly pitched roof on,” Woodruff said. “Originally all that soil was going to be removed, but it was determined that structurally it could be a problem because that’s a tremendous amount of weight. The majority was left in place.”

His crew reinforced some of the rafters and added an extra layer of sheeting, then new torch-down rolled roofing was installed by Brian McPartlon Roofing.

The west wing will be used for park offices. “We’re trying to move most of our staff out of the ranch house, Greer Garson’s house, for that to be public space,” Moss said.

The property also includes a barn, a tack room and a carpenter’s shop, some of that dating to the 19th century.

Moss said the improvement project is funded with fee dollars. “We’re a small park here and we’re free, but the Park Service pools the fees from the parks that aren’t and puts it into one pot of money and we can apply for it as long as 50 percent of the project is for visitor use.