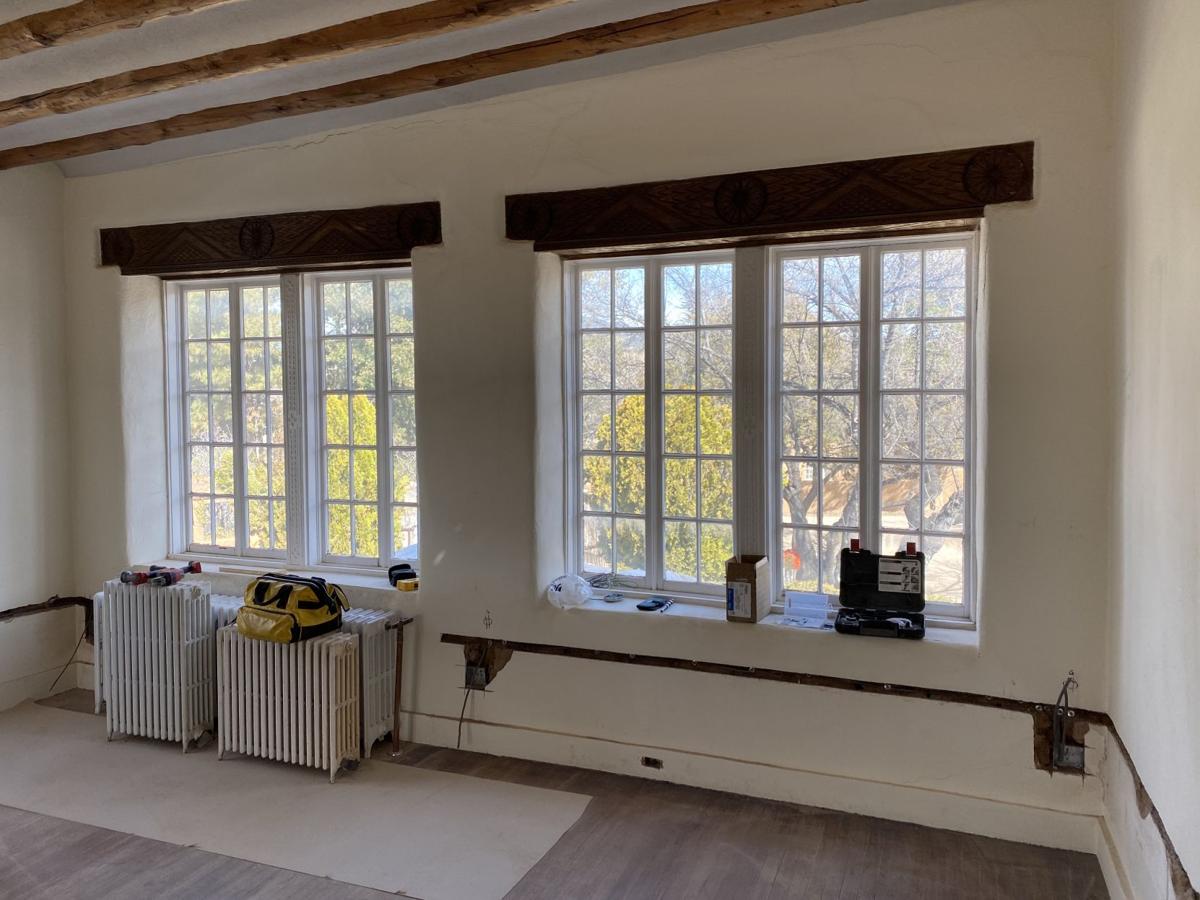 An interior view of the living room 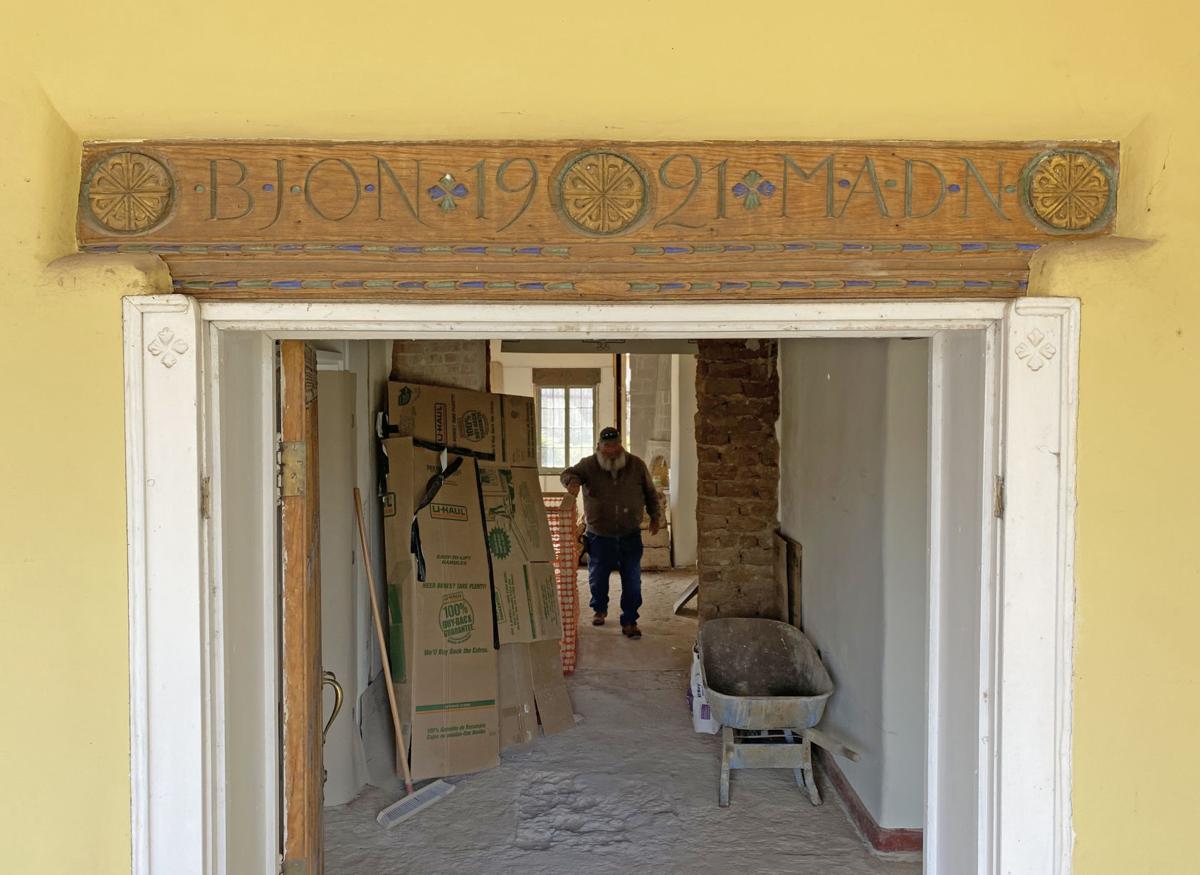 Carved lintel over the front door 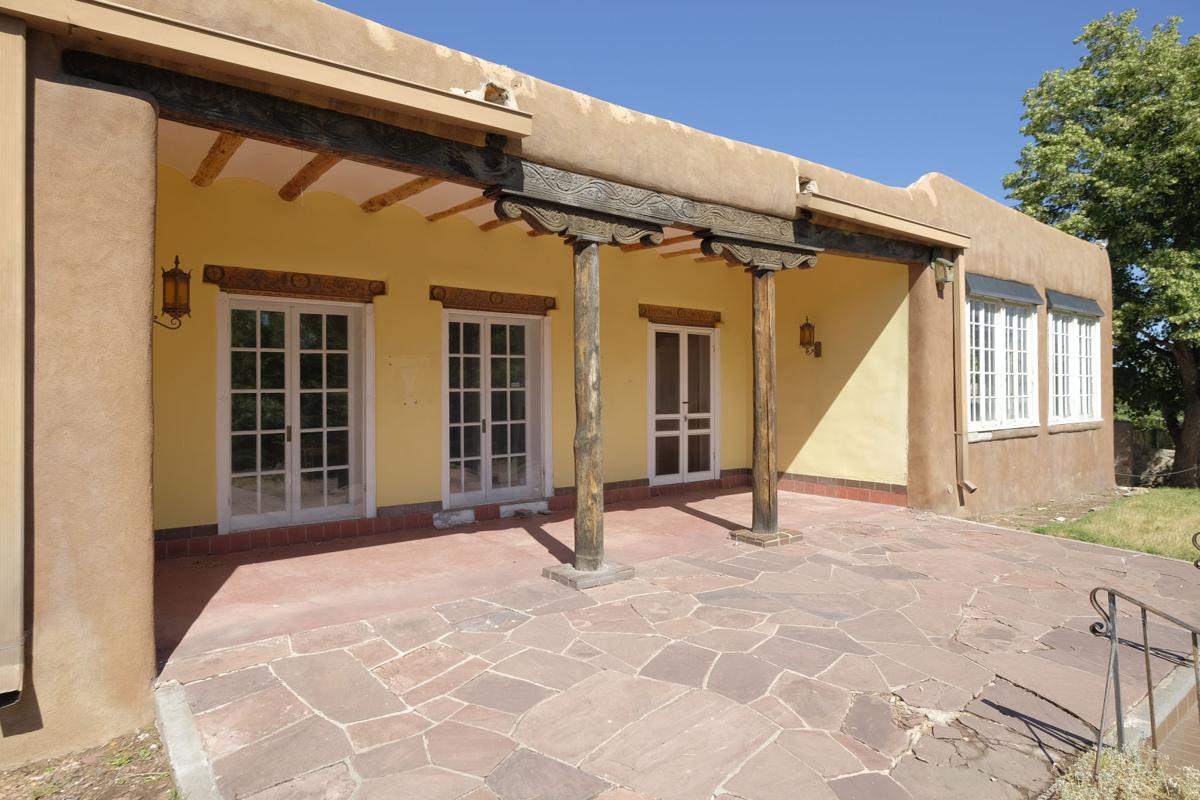 The front portál of the B.J.O. Nordfeldt House 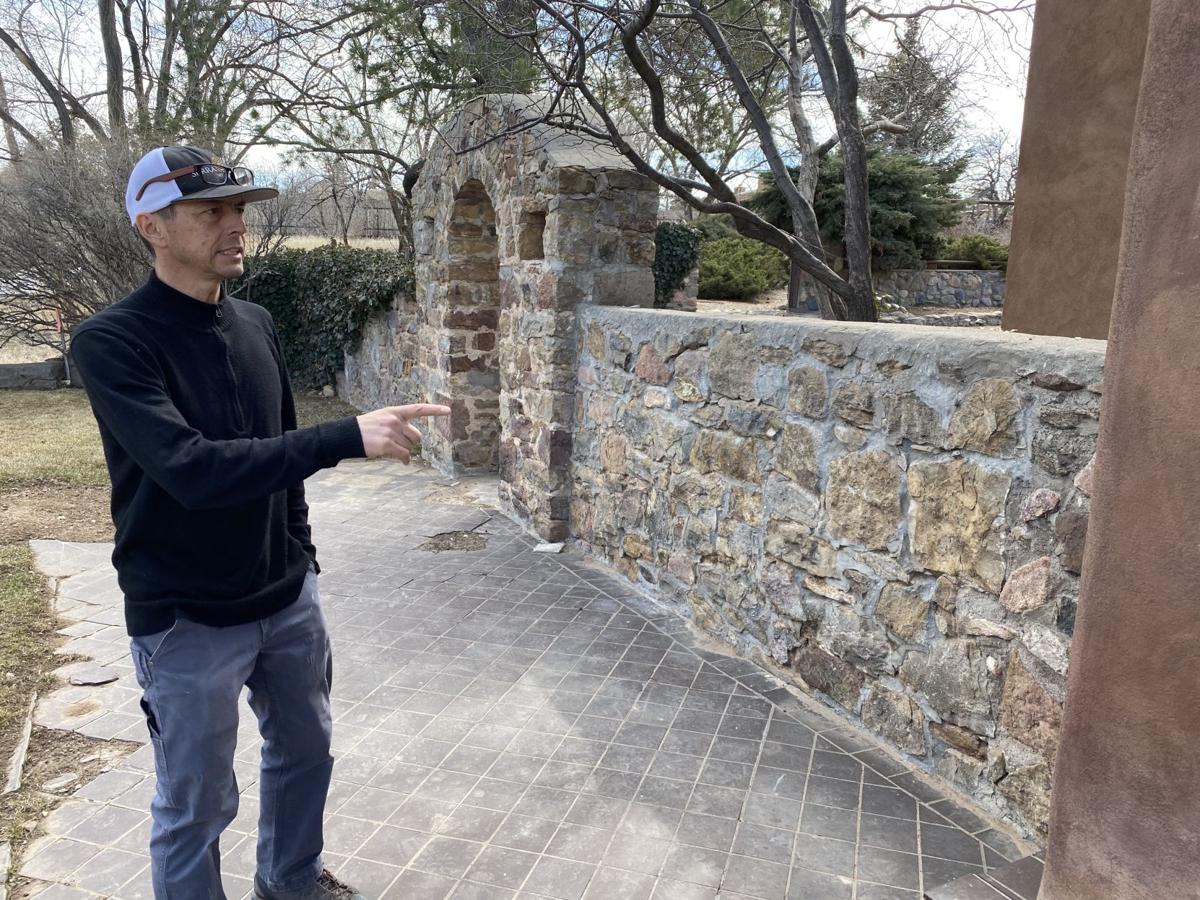 An interior view of the living room

Carved lintel over the front door

The front portál of the B.J.O. Nordfeldt House

Virtually every lintel in the home at 460 Camino de las Animas is carved. These headers over doors and windows boast geometric, Scandinavian-themed designs carved by the artist B.J.O. Nordfeldt, who built the house in 1921 with his wife, Margaret Doolittle Nordfeldt.

The visitor is welcomed with a splendid example of the artist’s chisel- and gouge-work at the front door. The lintel “includes three medallions, floral motifs, and the initials of Nordfeldt and his wife and the date of construction,” according to the successful nomination of the house for the National Register of Historic Places.

Emily Pannier, daughter of homeowner Robbin Dawson, wrote the nomination in the spring of 2019 and the adobe house was named to the National Register on Jan. 2, 2020.

Pannier worked with Santa Fe contractor Scott Cherry, Lightfoot, Inc., on the design of a historic restoration, with a small addition. “We began the work in earnest in January,” Cherry said during a site visit in early March.

At that time, he predicted the substantial work program would be complete by Thanksgiving. But on March 23, Cherry announced that he was temporarily closing his business because of the COVID-19 pandemic. “This is a manageable situation if we act boldly and quickly,” he wrote in an email. “We can choose to be inconvenienced temporally or damaged permanently.”

Bror Julius Olsson Nordfeldt was born in Sweden and immigrated to Chicago with his mother in 1891. After studies at the Art Institute of Chicago, he spent a year in Paris, at the outset helping to paint and install a substantial mural for the McCormick Harvester Company at the 1900 Paris Exposition. He then moved to England, where he studied traditional Japanese woodblock cutting and printing. Nordfeldt’s wood-block prints earned him the Silver Medal at the International Print Exhibition in Milan, Italy in 1906.

The artist married Margaret Doolittle in Tangier, Morocco, in 1909. The couple moved to Santa Fe in 1918. His art was on display the following April at the Santa Fe Print Shop, an establishment located at 135 Palace Avenue. According to a notice in the Santa Fe New Mexican, the show included a selection of etchings and lithographs by Nordfeldt alongside monotypes by Carlos Vierra, drawings in sanguine (red chalk) by Sheldon Parsons, pastels by Kenneth Chapman, pastels and lithographs by William Penhallow Henderson, and block color-prints by Gustave Baumann.

In Northern New Mexico, Nordfeldt shifted from printmaking to painting, focusing on landscapes and portraits of Pueblo and Hispanic people. He lived in the house on Camino de las Animas until he left Santa Fe in 1937.

That front door bears the carved initials and date “B-J-O-N 1921 M-A-D-N.” The door itself is carved into panels “that represent thirty vignettes of genre scenes, saints, and biblical scenes,” Pannier wrote in the nomination.

He also carved corbels “with medallions, serpentine lines, floral imagery, and beads, sometimes called bullets.” The man’s wood-carvings on lintels, doors, and corbels, both inside and outside, are estimated to total 700 linear feet.

The sheer volume of artistic decoration is reminiscent of that in another house on Camino de las Animas. Gustave Baumann built it in 1923 and adorned dozens of surfaces not only with carved wood but with lines of colorful finger-marks on the plastered walls around doors and windows. “They were buddies,” Cherry said.

Nordfeldt and Baumann were just two of the members of the city’s thriving artists’ colony who “often incorporated their own sense of craft” into their homes, as Pannier put it. Many of the artists loved the Spanish-Pueblo Revival style that the city prioritized beginning in 1912, and built their homes in that mode (Baumann, though, was an exception).

Pannier wrote that the massing of the Nordfeldt House and its recessed portál on the front resemble early examples of the Spanish-Pueblo design on which the revival style was based — the Palace of the Governors and the Roque Lobato House — as well as other revival buildings like the 1915 U.S. Forestry Service building, which was on Washington Avenue but is no longer extant.

The entrance portál on the Nordfeldt House is fairly unusual in having a coved-plaster ceiling, but that may be a later addition, Cherry said. The ceilings inside are supported by rounded rough-cut vigas and the walls are finished with white plaster.

When Cherry began the current work, the roof still had “about a foot” of dirt, he said. That layer of insulating dirt, which the Spanish called the torta, was the convention on adobe homes for hundreds of years.

The Nordfeldts included modern conveniences, such as electricity, running water, and heat provided by a furnace. “We’re going to re-use the radiators, do in-floor radiant heat in the bathrooms, and add some mini-splits,” Cherry said. “We added one fireplace and removed another.”

The Lightfoot project’s substantial but stylistically modest changes and upgrades are only the most recent made to the house during the past half-century or so. The second owner, Boaz Long, did four small additions before 1962.