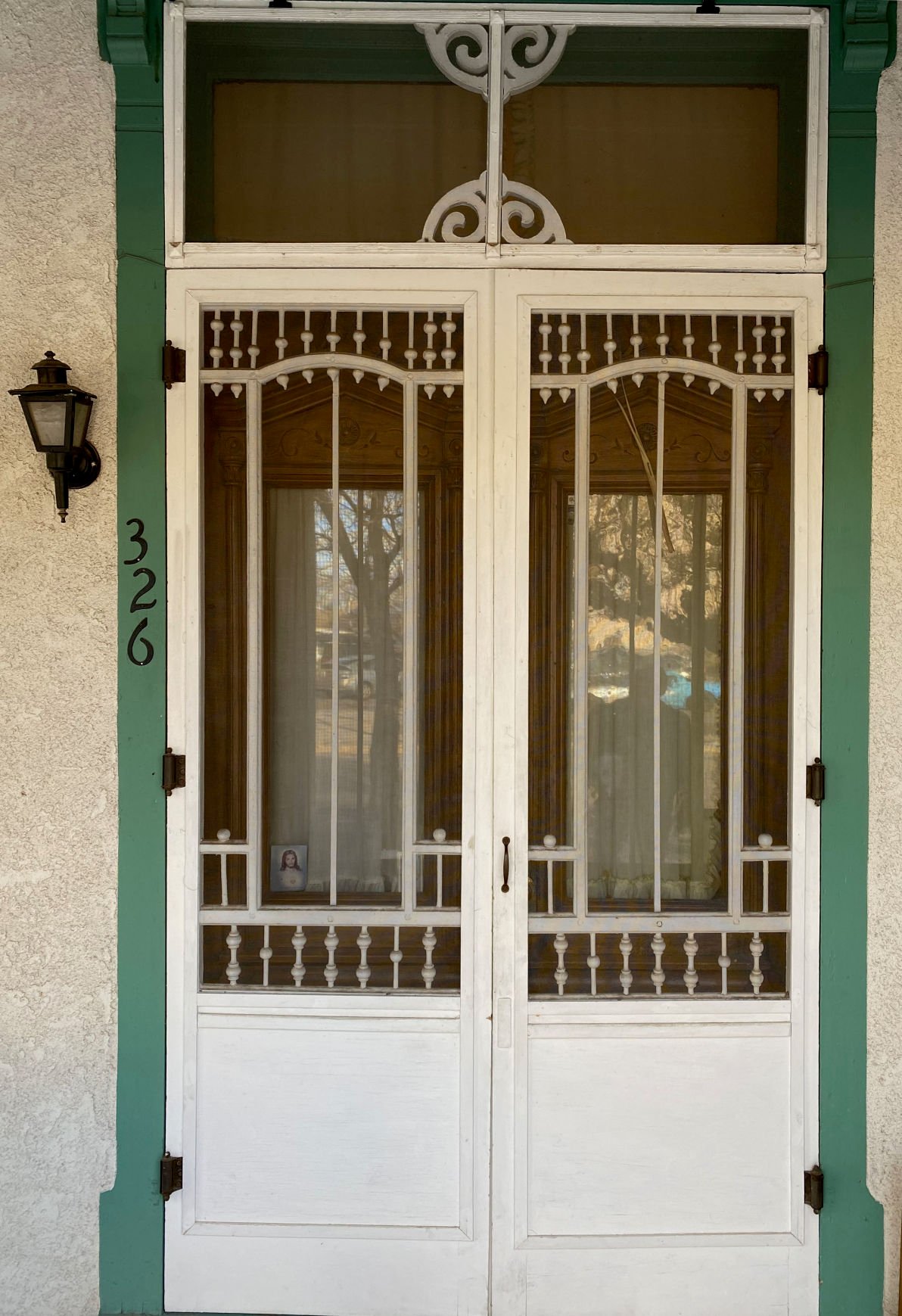 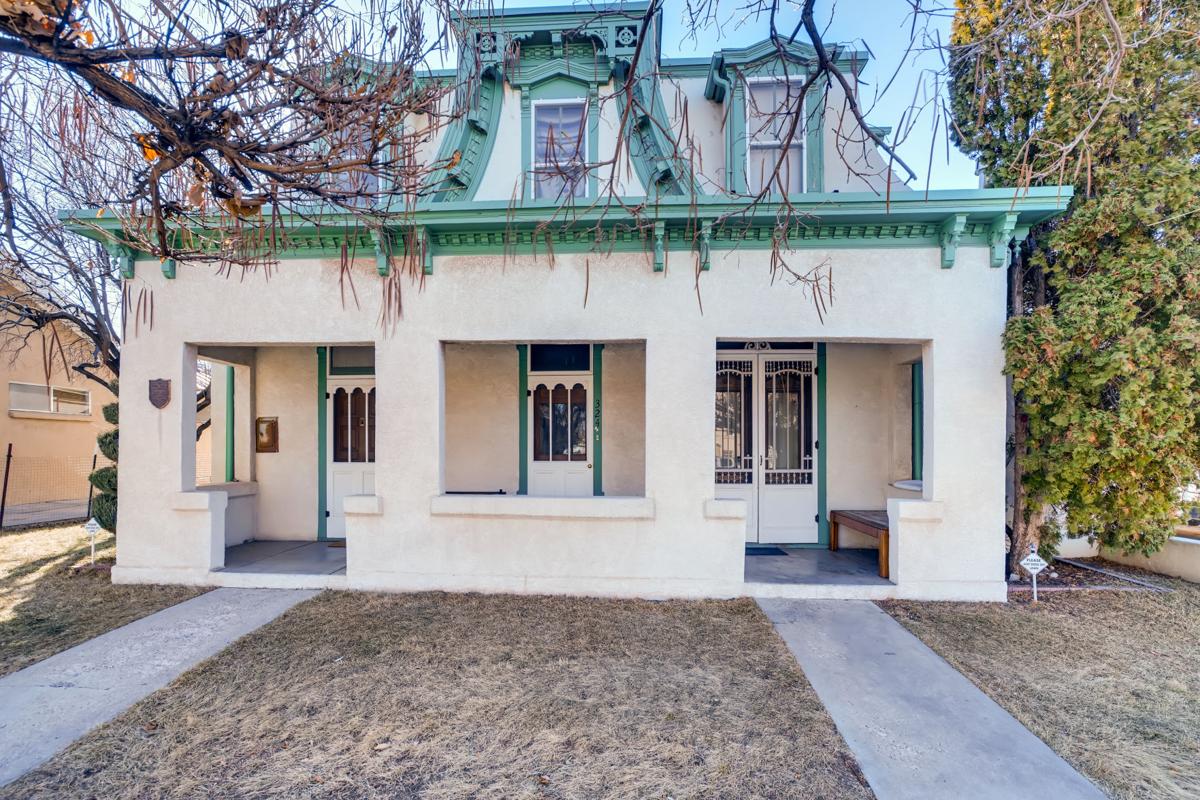 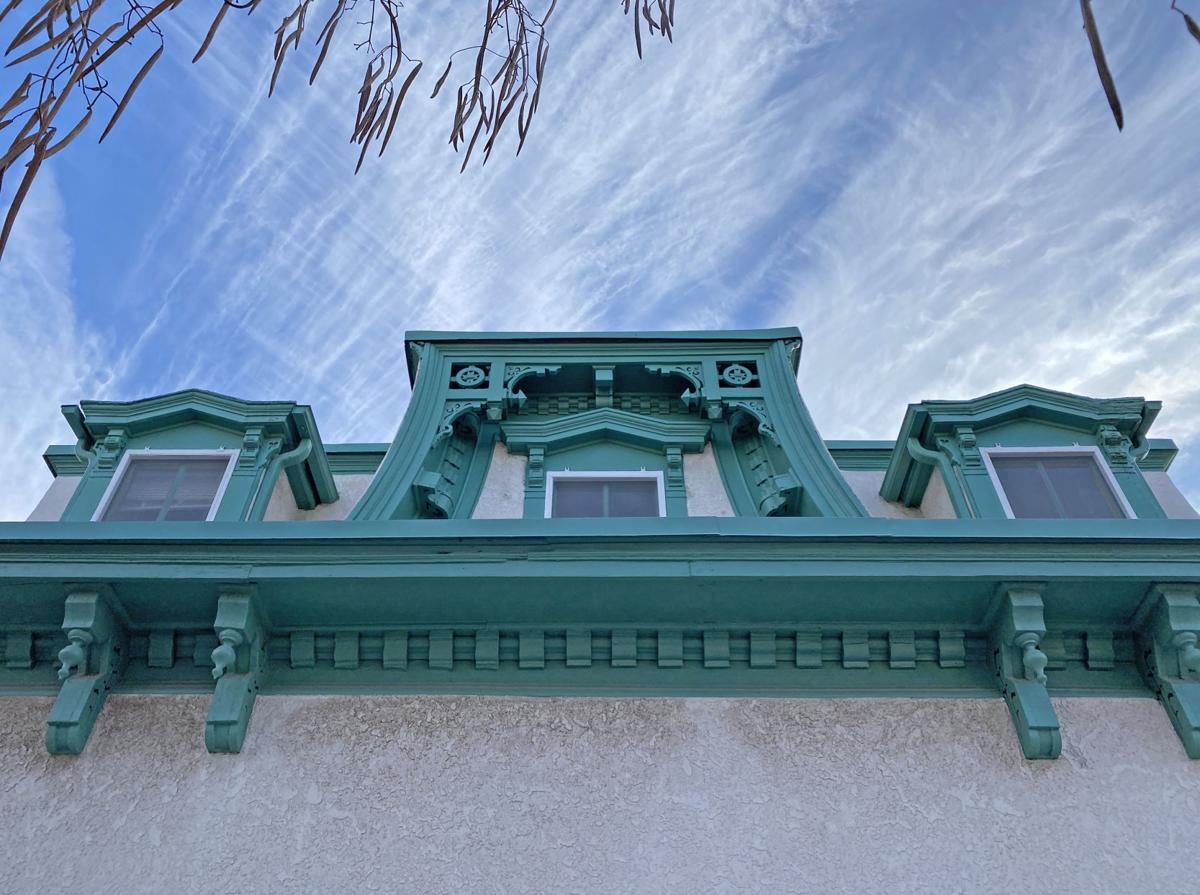 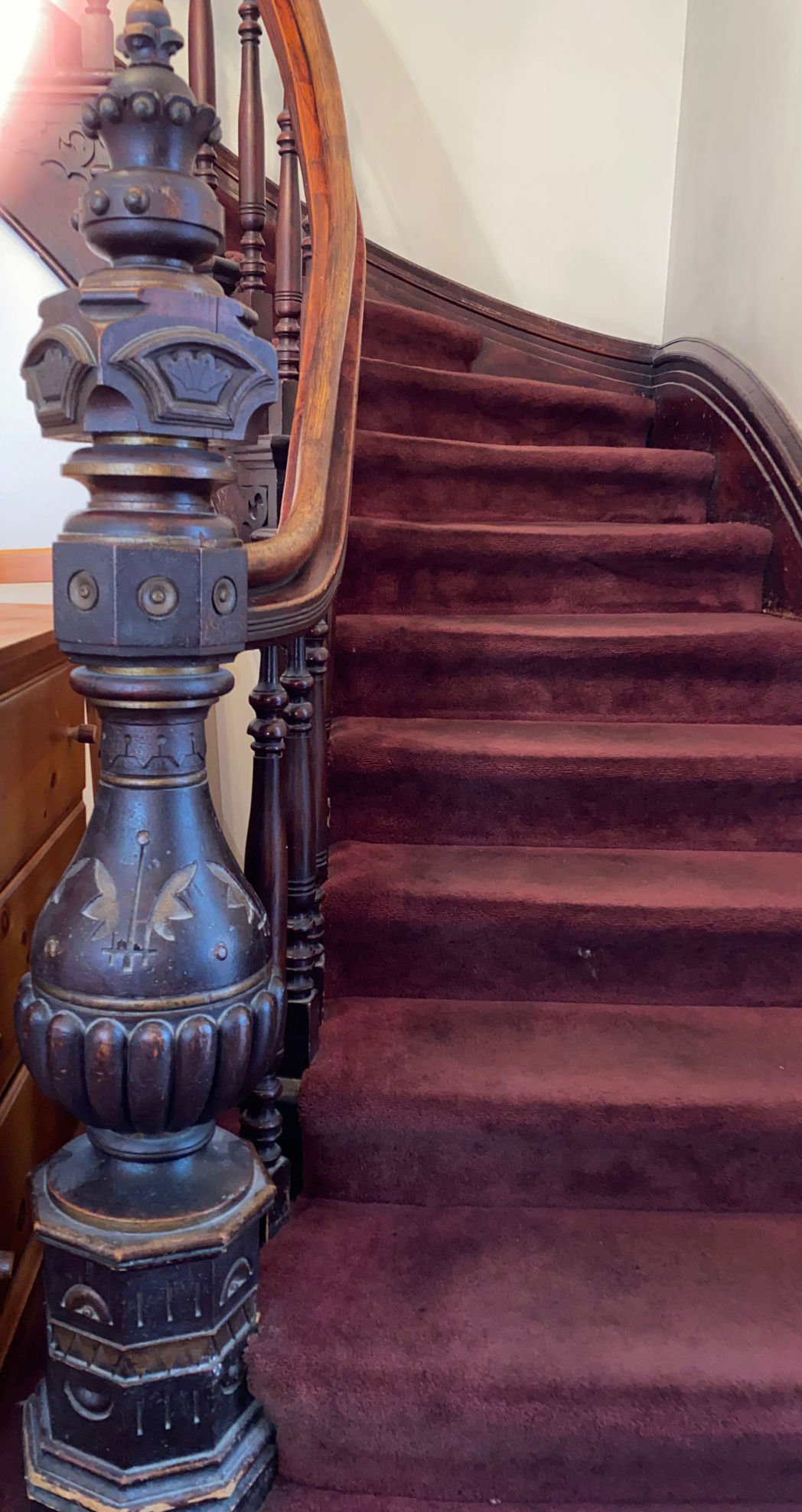 One of Santa Fe’s most distinctive historic houses is on the market. The Philip Hesch House, located at 324-326 Read Street, is a multifamily offering with four apartments. There are four separate entrances and each unit has its own bath.

Here and there in the house, you will find beautiful fixtures from days gone by. There are the lovely front doors and screen doors, and on the inside of one of the wooden doors is an interesting design strip of inlaid brass — an example of the small surprises to be found. Just inside is the marvelous staircase with fancy carved newel, handrail, and balusters.

The 1888 house is characterized by a mansard roof — the only other one of these in Santa Fe is the Hayt Wientge Mansion on Paseo de la Cuma. The second story was originally shingled rather than stuccoed, according to the book Old Santa Fe Today.

The house also stands out for its “carpenter style” exterior ornament. In fact, the intricate and carved cornices, brackets, and other features may well have served as an advertisement for their owner’s business.

Philip was a master carpenter and contractor who was born in Preston, Ontario, Canada, in 1828. He moved to Titusville, Pennsylvania, in 1865 and worked there for 11 years before relocating to Santa Fe. Here he established a pioneering facility.

A notice that appeared in the July 22, 1883, edition of the Santa Fe New Mexican reads, “Philip Hesch’s new planing mill and window sash manufactory located near Guadalupe church is now completed and is running to all the business it can turn out. Santa Fe needs such institutions.”

Twelve years later, a more extensive report appeared in the newspaper under an “Industrial Sketches” heading. It explained that Hesch’s Santa Fe Planing Mill and Sash and Door Factory was run by steam power. “There has not been a single business house of any prominence erected in this city since the establishment of his factory that [he] has not in some way helped to build,” it said.

Hesch and his brothers built the Catron Block. That’s the historic building on the northeast corner of the Santa Fe Plaza that today houses Santa Fe Dry Goods and the Shiprock Santa Fe gallery. They also built St. Catherine Indian School, three buildings of Santa Fe Indian School, a new (1911) pulpit at the cathedral, and “many of the modern storefronts seen on San Francisco Street,” according to his obituary in October 1914.

The modern history of 324-326 Read Street can be found in the archives of the Historic Santa Fe Foundation. The property abstract begins with the conveyance of a land parcel from Charles Lerouge and his wife, Maria Rita Garcia, to John Allen on May 12, 1869. During the next 10 years, Allen and other buyers acquired much of the adjoining land for speculative purposes in anticipation of the construction of the Atchison, Topeka & Santa Fe Railroad spur from Lamy Junction.

That addition was shown as “Valuable Building Lots” on an 1880 Santa Fe city map. The lots on which the Philip Hesch house was built were numbered 258 and 259.

The original house is wood-framed, and there is a later, adobe, addition.

Sam Escobeda, Barker Realty, is representing the Hesch House for the Ulibarri family, which has owned it since the 1950s. There are currently four apartments, but under the zoning in place, a new owner could also do business or live-work uses.

The house is just a few steps from the Santa Fe Railyard. It totals 3,174 square feet, and there are six parking spaces. Escobeda is listing the property for $998,000.