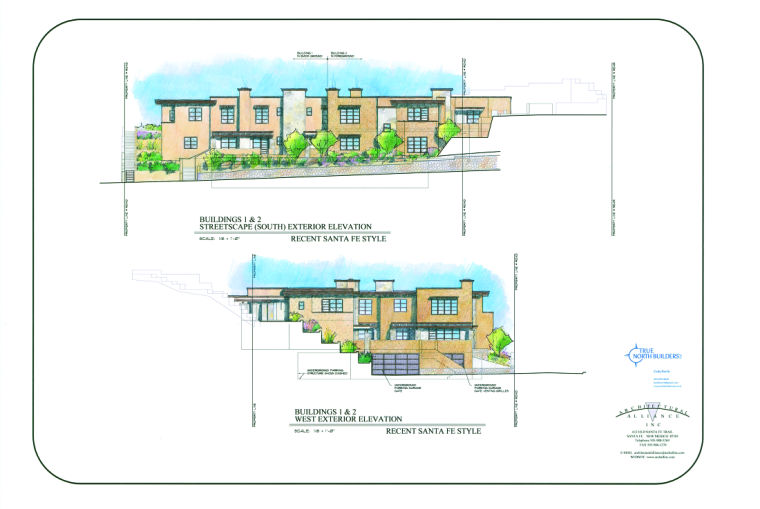 An architectural rendering of the Paseo de Peralta building façade 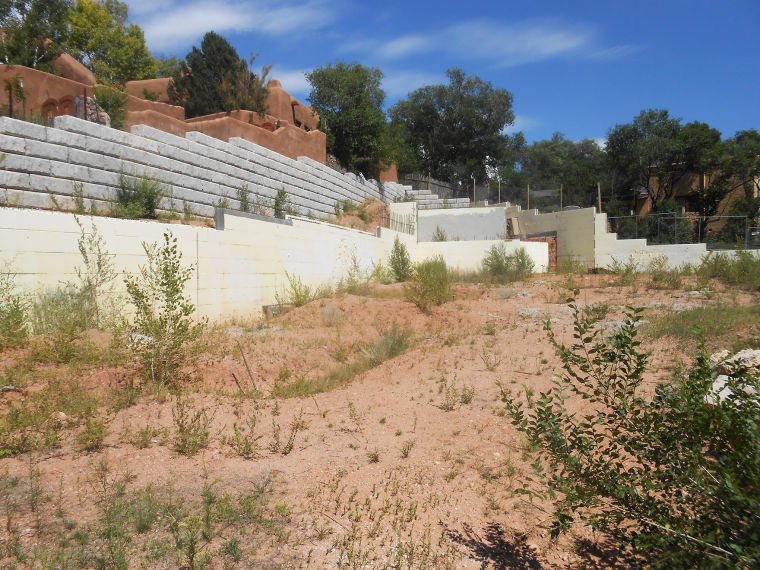 The empty lot and retaining walls at 511 Paseo de Peralta

An architectural rendering of the Paseo de Peralta building façade

The empty lot and retaining walls at 511 Paseo de Peralta

The Paseo North project involves the construction of four condos, each one about 2,800 square feet, in the vacant lot at 511 Paseo de Peralta.

When architect Eric Enfield took the proposal before the Historic Districts Review Board in May, some board members expressed concerns that the two condo buildings looked too contemporary, including because of dark steel elements at the windows and portáles, a too-high central elevator shaft, and an impression of looming walls.

“What I showed them was that this building meets all the requirements for recent Santa Fe style, Enfield said in early July. “If we’re going to be able to use some new materials and styles in the downtown area, then we might as well start looking at what new buildings might look like that will be compatible with historic styles.

“Some of the members wanted it to look a little more traditional, so I toned down some of the details. We were going in with all-metal portales. What I’ve agreed now is to have metal posts and carrier beams and then wood beams and decking.”

North added that a landscaped plaza on top of the planned underground parking garage will “soften” the development’s appearance. “We’re reducing the roof overhangs from 30 inches to 24 inches, and we brought down the elevator shaft. We thought that rock shaft would look good bigger, but we reduced that. And regarding the massing right on Paseo, we’re now doing a one-story façade that steps back for a portál.”

Back on the H-Board agenda on July 22, the project was approved on the condition that a few minor changes are made. The most important, North said, is doing plaster parapets instead of the bronzy-metal trim they had planned to do along the building’s top edges.

The builders consider Paseo North as a “transition piece” between the two large institutional buildings a half block west — the 1889/1930 U.S. Court House and the 1912 Scottish Rite Temple — and the residential neighborhood between Magdalena Road and Otero Street. While North and his business partner, Brad Karp, are happy they are able to proceed, North maintains that there should be “a vernacular of this time, because if I just try to imitate La Fonda over and over, I’m creating false historic buildings.”

The builder was born in Taos and grew up in Santa Fe. “I’ve had my contractor license since 2009, but I was vice president of a company with my family in Colorado before that. I helped out on an adobe house my mom built when I was 10, and I did stonemasonry right out of Santa Fe High School.

“We believe in trying to maintain our style while growing with the time, using materials of our time. We are doing more wood, because the H-Board asked us to. Build something authentic and beautiful and in 50 years it becomes a contributing historic building. But if we keep making these impersonations of the past, how will those be seen in 50 years? I appreciate the historic community. I also feel strongly about opening up the discussion of what the vernacular is of our time.”

Asked about the project timeline, Karp said it depends on two variables. “First is obtaining all the approvals and permits, and second is inventory management. We have some 34,000 square feet of property in the historic district either finished or in development, including this, and the market can only absorb so much in a short period.”

Included in that 34,000 figure are seven remodeled or new condos in True North Builders’ Alma del Cañon project at 1020 Canyon Road; two adjacent homes on Camino Cerrito; two properties on E. Palace behind the old grocery store; and three homes at 538, 657, and 659 E. Palace; as well as Paseo North.

For more information about the company, see truenorthbuildersNM.com.