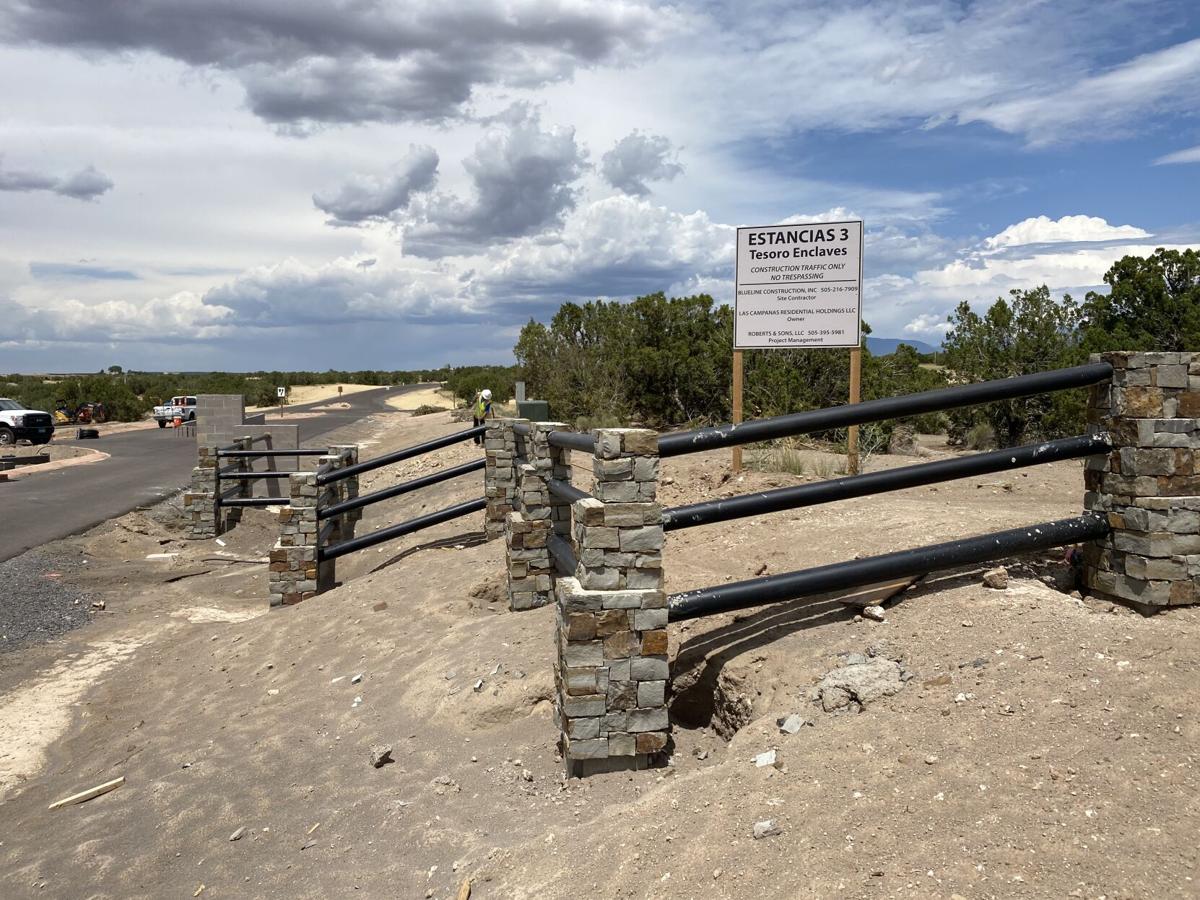 Tesoro Enclave is the newest community to be developed in Las Campanas, the high-end residential subdivision that began in 1992. Jonathan Bartlett, Las Campanas Realty vice president of sales, called Tesoro “our new jewel.”

The project consists of 37 homesites spread over 110 acres. Lots, ranging from 1.5 to 6 acres, were first available in May and by mid-July, 14 had sold. Bartlett said people are going for the larger lots, the mountain views, and the sense of privacy. The priciest lots border open BLM land to the west.

Asked about the buyers, he said, “A lot of them are primary, not second-home buyers. They want to get out of the cities.”

Are many of them retirees? “Yes, and people who are getting close: they’re thinking about that next step. We’ve had several who said they were going to do this two years from now and they’re doing it now. They’re at least going to secure the lot.”

The homes built in Tesoro Enclave will average about 3,500 square feet; the minimum is 2,000 square feet. Lots are priced from $180,000 to $700,000. “These are being sold to clients,” Bartlett said, “but there are also builders who are doing spec homes, including Tierra Concepts, Prull Custom Builders, Zachary & Sons Homes, Hunter Custom Homes, and Boss Construction.”

Prull, Zachary, Hunter, and Frank Yardman Construction are featured in Las Campanas Realty’s preferred-builder program. “We began the program about four years ago and that has worked out to almost 40 build jobs,” Bartlett said.

Builders will break ground on the first Tesoro Enclave homes this month or in September.

Valverde is another new neighborhood about to take off, this one just north of the Sunset Golf Course.

Builder Arete Homes of Santa Fe has four plans to choose from, and there will be a list of optional upgrades. Company owner Rob Gibbs will start on the first model home in August.

Valverde is in the southwest corner of Las Campanas (about a quarter mile north of Caja del Rio Road), while the Tesoro Enclave parcel is in the northeast, just north of Black Mesa. That latter subdivision opened in 2017 and was the first new one to be developed in Las Campanas in more than a decade. Black Mesa has 25 lots. Of those, 20 have sold and houses are going up on 14 of them.

Still to come: Mesa de Oro, immediately east of Black Mesa. “That’s 23 lots and we’ll bring that on in late 2021 or early 2022,” Bartlett said. “The only thing left on the map is a parcel [over 100 acres] in the southwest corner of Las Campanas, but we have no plans for that in the near future.”

Las Campanas, located northwest of Santa Fe, has 1,717 lots. Nearly 900 homes have been built to date. And there are about 400 lots that have been purchased but not built on. “The project is more than 25 years old and the good ones have been picked over,” the Realtor said. “The lots that are left are not like those at Tesoro or Black Mesa, where you’ll be surrounded by newer homes that look similar to what you want to do. The other areas kind of look outdated.” In the newer areas, you see houses with more contemporary design, more glass and steel and angles. A year ago, Bartlett said three-quarters of the new homes looked contemporary, a contrast to the subdivision’s older Spanish-Pueblo Revival (“Santa Fe Style”) paradigm. Now he says “that pendulum is swinging back to what we call transitional: contemporary with touches of Santa Fe Style.”

Perhaps those older lots need to be discounted. “They are,” Bartlett responded. “Our average lot in Tesoro is selling for $330,000 and the average resale lot in other neighborhoods is $93,000. People don’t mind spending money to get exactly what they want, we have found.”

For more information, see lascampanas.com. To see a map of the subdivision, choose Real Estate on the navigation bar and hit Neighborhoods.