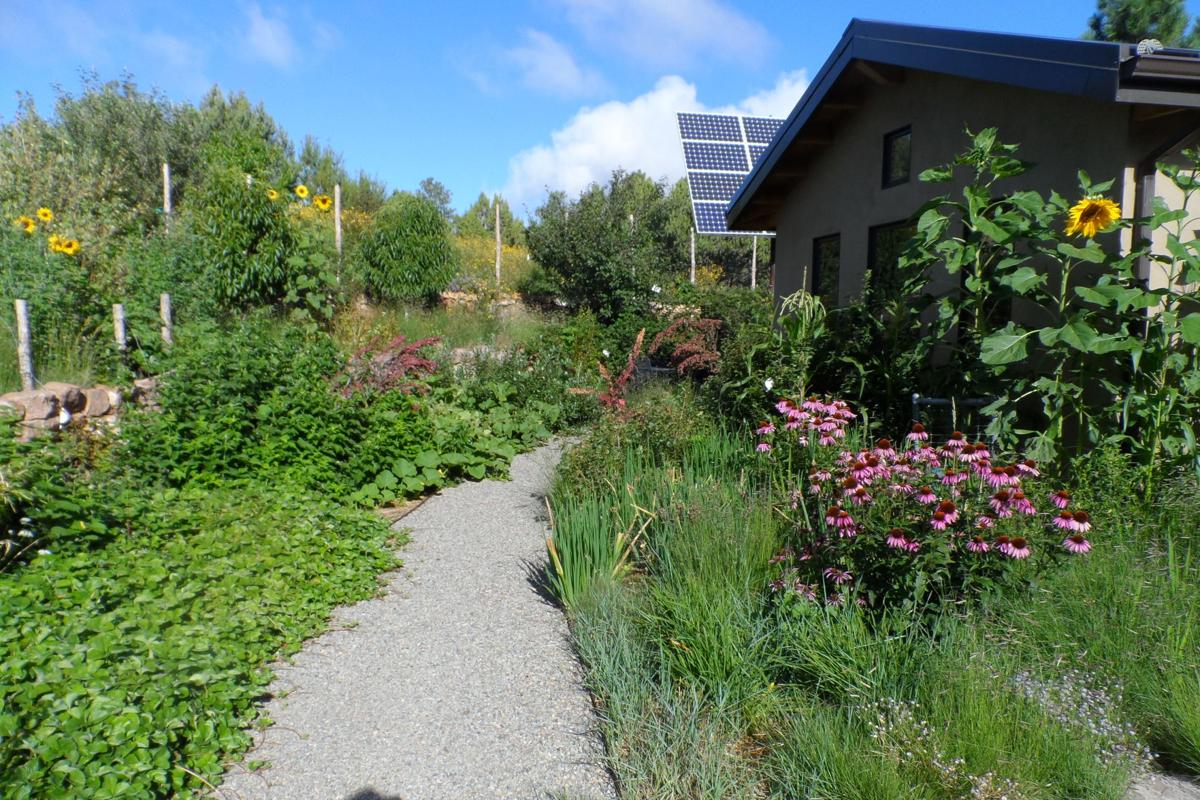 The bountiful yard in season 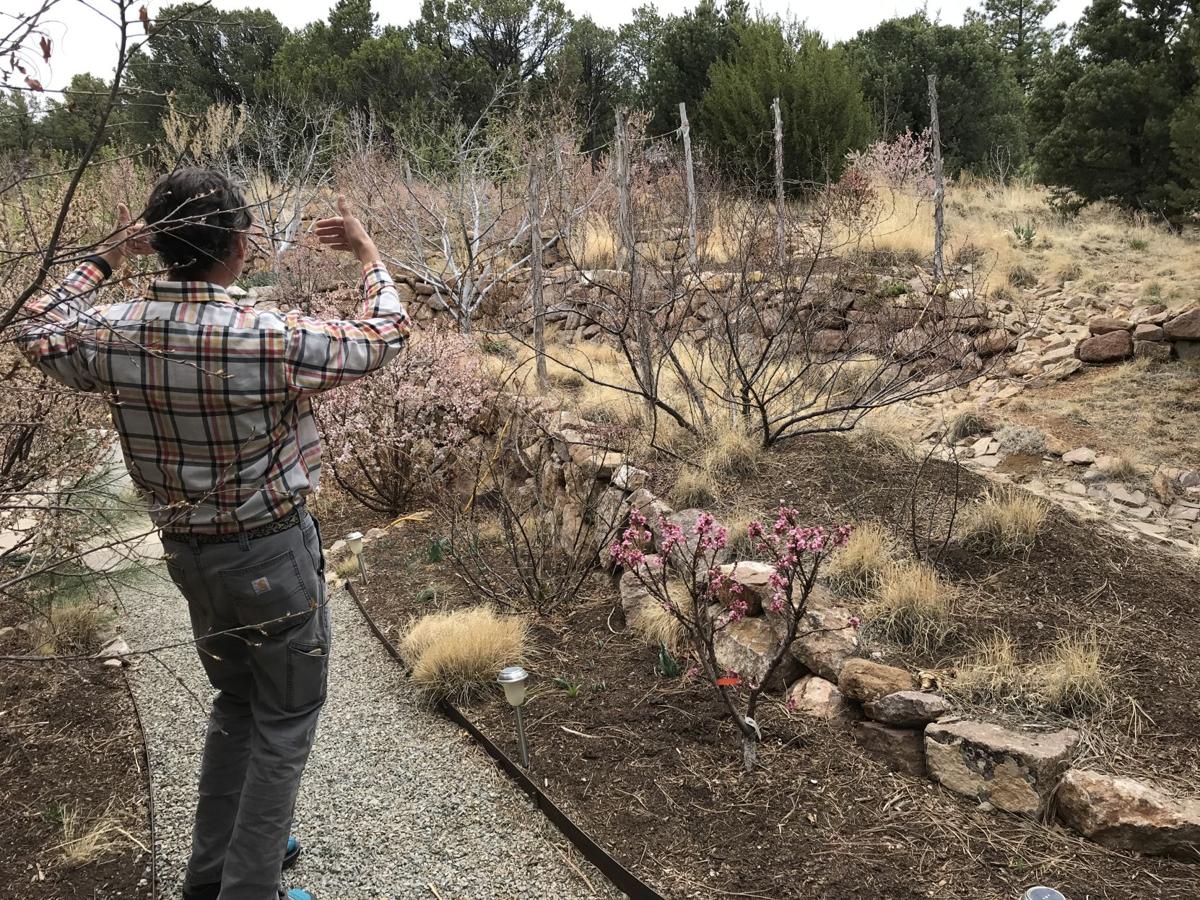 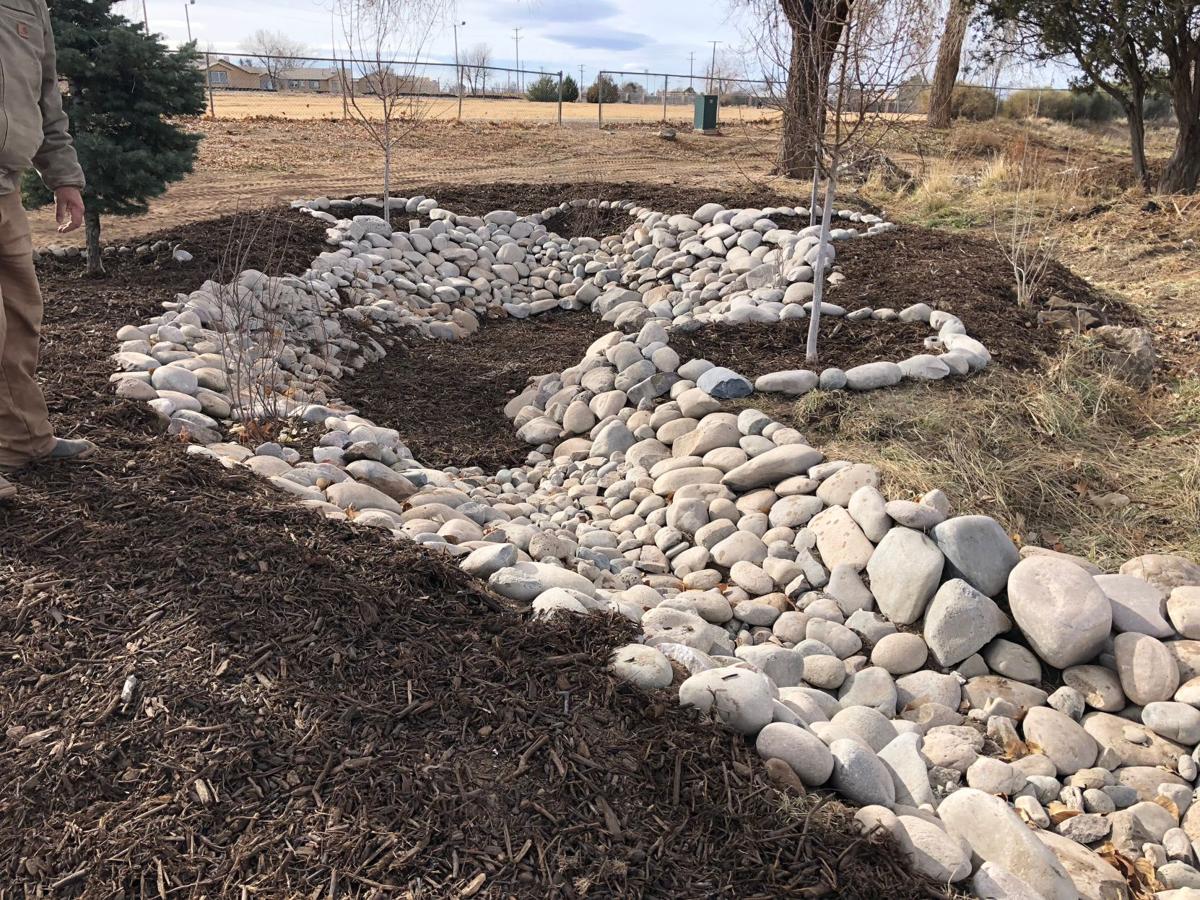 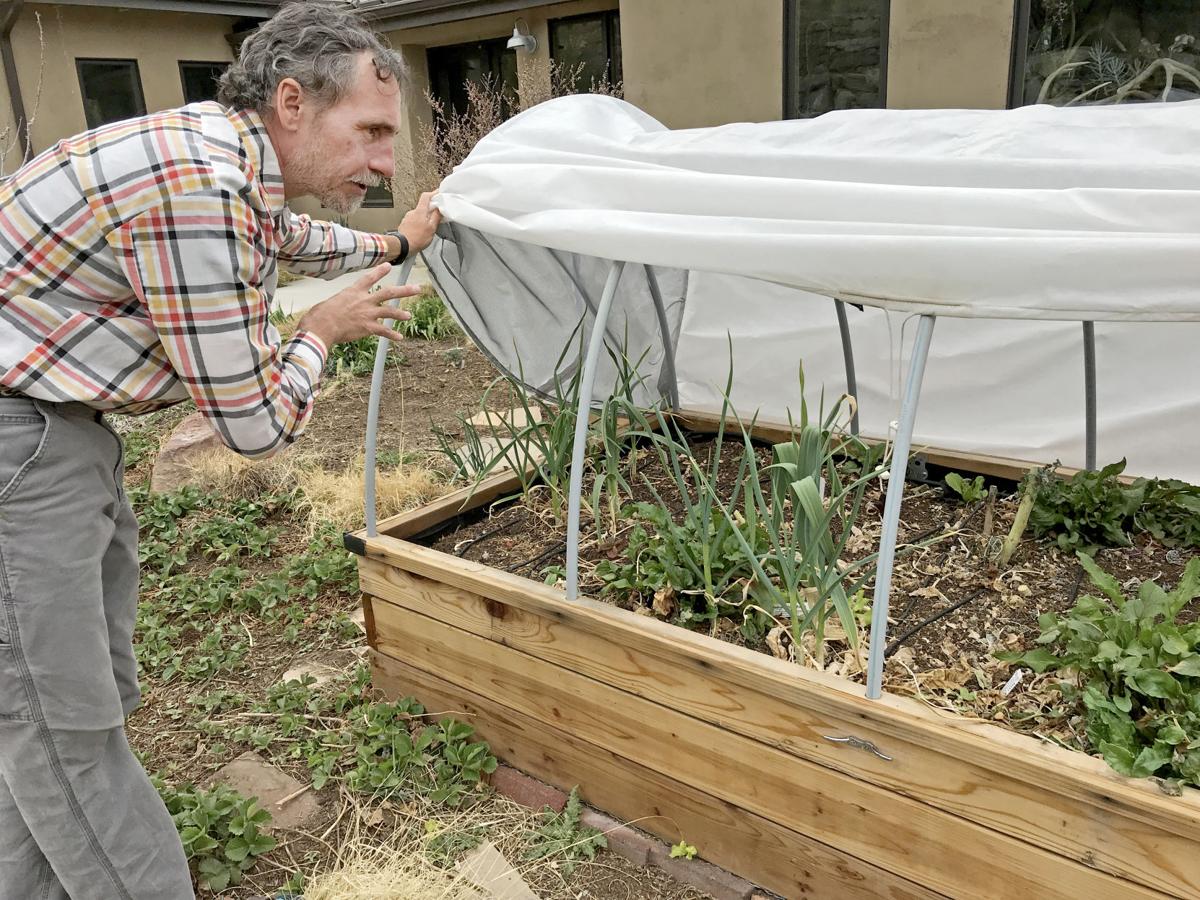 Kidd checks on vegetable growth in a raised bed

The bountiful yard in season

Kidd checks on vegetable growth in a raised bed

Rainfall in the Santa Fe area between March 1 and April 30 was just 0.31 inch. That’s 60 percent less than the previous 10-year average for the period. As the skies becomes less generous, it is reasonable to try to make our gardens more self-sustaining. Permacultural thinking can help. Among its 12 principles are observation, valuing natural resources and diversity, obtaining a yield, and integrating rather than segregating.

“Some of the examples of permaculture are to have soil that’s alive and that will support plants and beneficial microbes and worms,” said Jeremiah Kidd, “then give it moisture to support fruiting, productive plants: nut trees and shrubs, fruit trees, fruit shrubs, and edible flowers like daylilies, nasturtiums, and tulips; and then make it all look beautiful.” Kidd is owner/director of San Isidro Permaculture in Santa Fe. “You try to design guilds, and that can include planting daffodils around apple trees to keep gophers away from the roots; planting mints and salvias to attract bees for pollination; and planting what we call dynamic accumulators like comfrey and yarrow that can synthesize certain minerals in the soil.”

When rain is scarce, we should maximize what does fall, by designing the landscape to capture it and release it into planted areas and by directing runoff to storage tanks. “We want to amend the soil and push water into the soil as much as possible using swales or even just depressions, ponding areas — moving water away from where it’s a problem close to the house and into depressions where we can put plants,” Kidd said. “Building the soil is huge, to be able to actually soak up the water, and with microbes to help clean the water in case it’s coming off the street.”

What if our “soil” seems more like a parking lot? “Organic matter is the solution to most of the problems, whether it’s better drainage or holding the water. If you have caliche, you might need a machine in there once to loosen up the soil. A low labor-intensive method is sheet mulching. If you can afford it, put compost down and also mulch, but otherwise the mulch will slowly turn into compost. You want to give the soil some shade, so that microbes can start growing and there can be reactions with worms and other organisms.”

Kidd has been working in Santa Fe landscapes for nearly 20 years. He was a partner in Danny Buck’s company, Living Structures, Inc. “Working with Danny was one of the main reasons I moved from Oregon. He had the only permaculture company I could find in the country that was not just doing design but design-install.”

Living Structures was a cooperative, which was important for Kidd, who had been at the Breitenbush Hot Springs cooperative in Oregon. “I was on the capital improvements team at Breitenbush, so we replaced a bridge and insulated old structures and built some new ones. I was in charge of building an earthship and a little cob house, kind of introducing them to natural building in the early 1990s. That, and growing food, was my passion.”

Kidd studied permaculture because he was most interested in plants and edible gardens and natural building.

“At Living Structures, Joel Glanzberg and I were running the permaculture part of the business and we were building with strawbale, pumice-crete, adobe, and Rastra. Those are large projects and they can go south or north, and sometimes you’re working with people who are much less picky about their raised beds than their master bathrooms. Professionally, I wanted to just work outside and not be around power tools all the time.”

He was with Living Structures from 1996 to 2000, then he left and started San Isidro Permaculture. One of the company’s recent jobs was a rain garden at Larragoite Park for the City of Santa Fe. “That will harvest over a half million gallons of water a year. There’s a lot of water coming off of the street and causing some flooding in the neighborhood below, so this is designed to help solve that, and we planted 20 trees and 60 shrubs.”

Kidd was engaged in river restoration and erosion control on the Galisteo River, using state grant monies. “The whole idea was to raise the water level so that it wets a larger area and reduces scouring. And we worked with Wild Earth Guardians to plant several hundred willows and cottonwoods. We’ve also worked at the Labs on revegation after the forest fires.

“For homeowners, most of what we do is rainwater harvesting, edible landscaping, organic maintenance, and using graywater. Using graywater from your house is legal in New Mexico, and if it’s under 250 gallons a day, you don’t need a permit. The average American couple uses 160, 170 gallons a day. That’s a lot of water to keep your plants alive. So I always push people to use this. It’s everything but the toilet and the kitchen sink; that’s blackwater.”

Kidd’s other love is volunteering and consulting overseas. That branch of his operation is Permaculture Design International. A grant from the U.S. Agency for International Development (USAID) has allowed him to train young Jamaican farmers in permaculture and help set up organic farmers’ markets. “It’s to try to help keep the kids in their villages and make use of their land.

“I’m supposed to go to Zimbabwe in September. That will be broad-scale passive water harvesting. Also, I’m running a ferrocement cistern workshop. This is making water tanks out of thin-walled, very strong cement. I did that in Morocco last year. A lot of these places don’t have large plastic tanks or they’re expensive compared to cement.

“I love working here, too, but sometimes it seems a little more important to help girls be able to go to school and not have to carry water all day than just catching rainwater to grow someone’s lawn.”

Kidd’s house and business office on Hidden Valley Road is a demonstration of permaculture principles and food production. A licensed general contractor, he built this house using strawbale and compressed-earth block construction.

He reuses all of the water out of the house. That’s not just recycling graywater from the sinks, washing machine, and bathrooms, but blackwater from the toilet and kitchen sink. “Our system is called SludgeHammer. It’s an aerobic system. You pump oxygen into your septic tank then add a unit with lots of surface area and you add beneficial bacteria. It’s all just in your septic tank and we put a pump in there to pump out to the irrigation system for watering all the plants.”

His main planted area has terraces designed to trap rainwater for slow release to trees, shrubs, and smaller plants. A big swale at the top catches the first amount of rainwater and soaks it into the soil. Rainwater is diverted to storage tanks. “For irrigation, we use about one third rainwater, one third treated house water, and one third well water — but we have a pretty water-intensive garden because there are so many fruits,” Kidd said.

He opened one of the raised, covered vegetable beds to check on the progress of lettuces, beets, garlic, and kale. The ground nearby was covered with strawberries that had already yielded lots of fruit. Kidd walked along the path naming a bounty of edibles, among them Korean cherry, chives, hibiscus, dwarf peach, almond, pear, raspberries, Saskatoon serviceberry, thornless blackberries, marionberries, apple, akebia, nectarine, gooseberry, Nanking cherry, orach, horseradish, and asparagus.

For more details about the company’s services, call www.sipermaculture.com or call 505-983-3841.