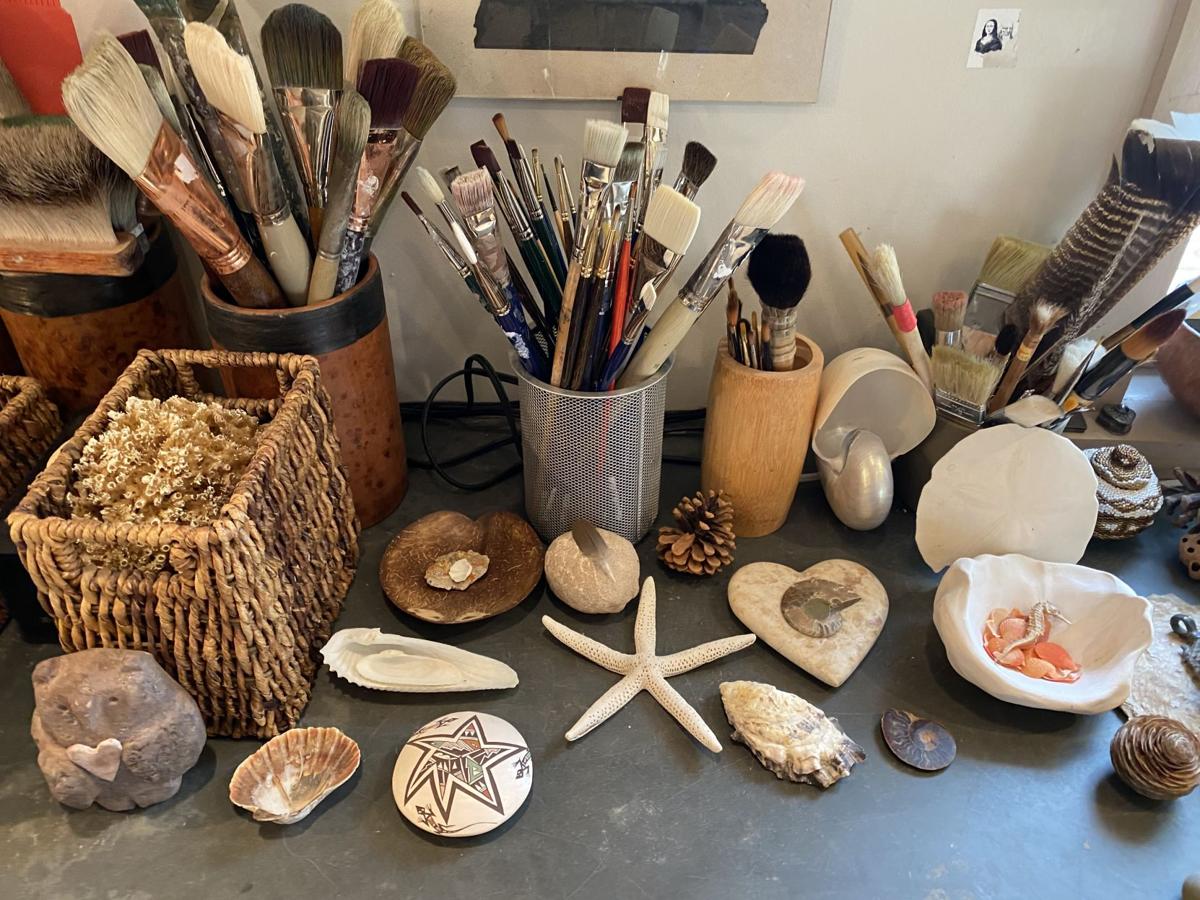 A studio view: brushes and treasured objects on a table 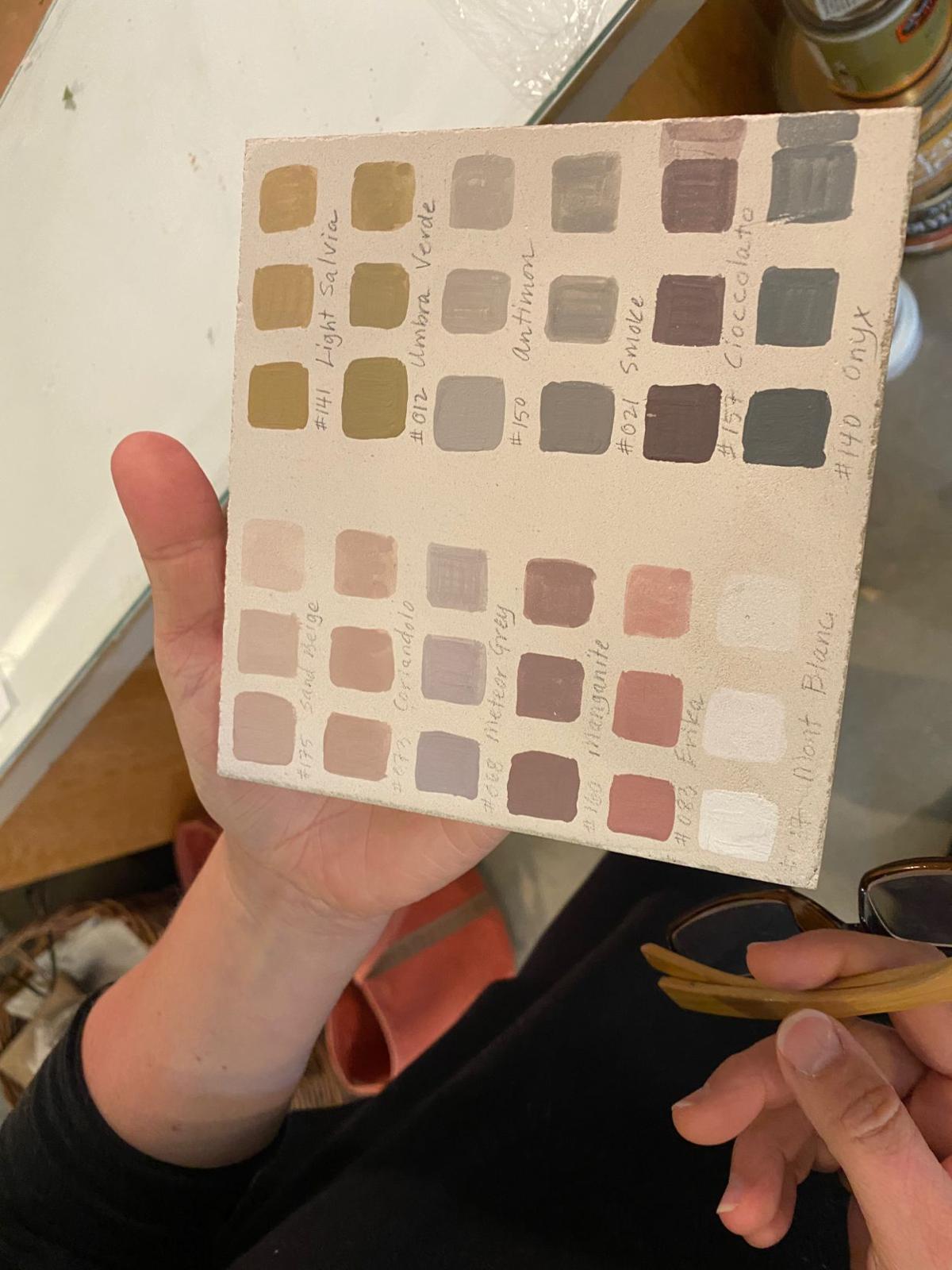 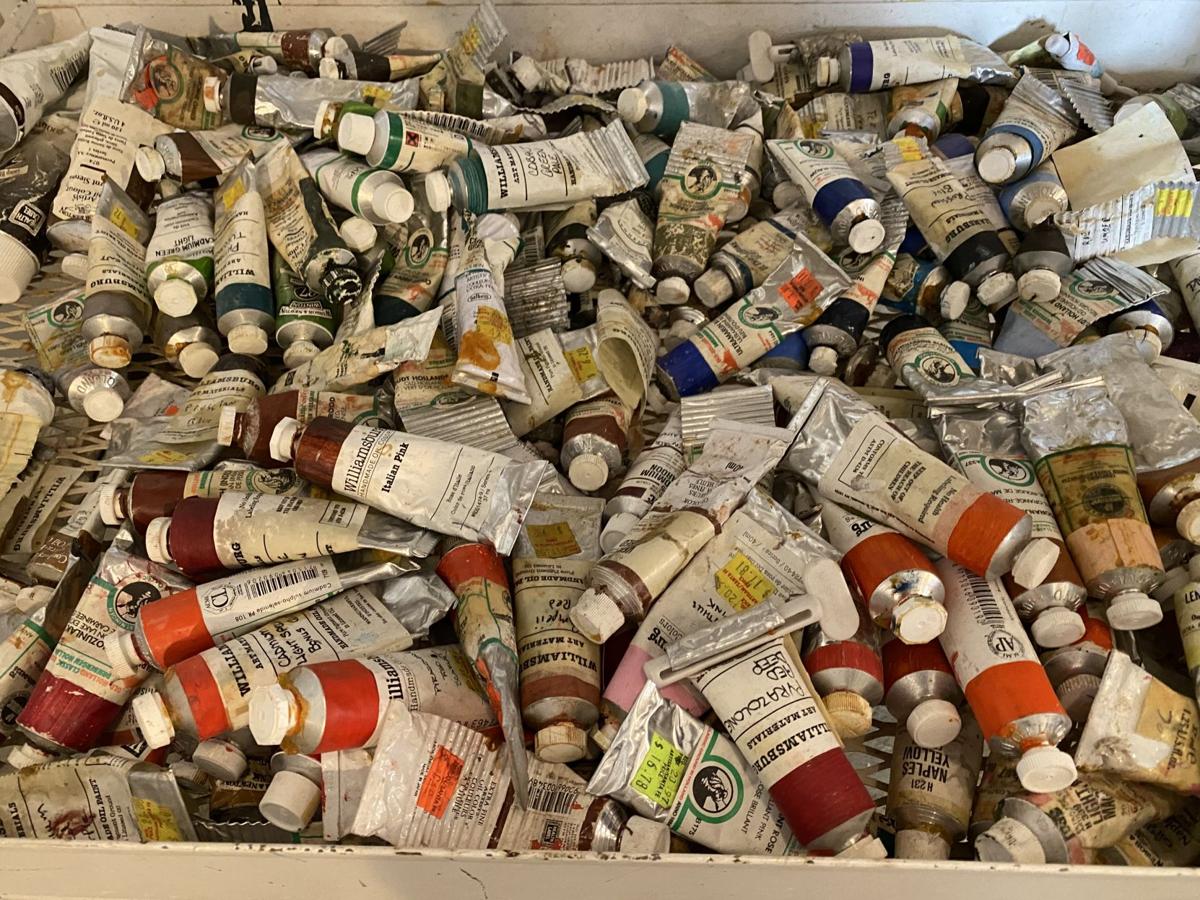 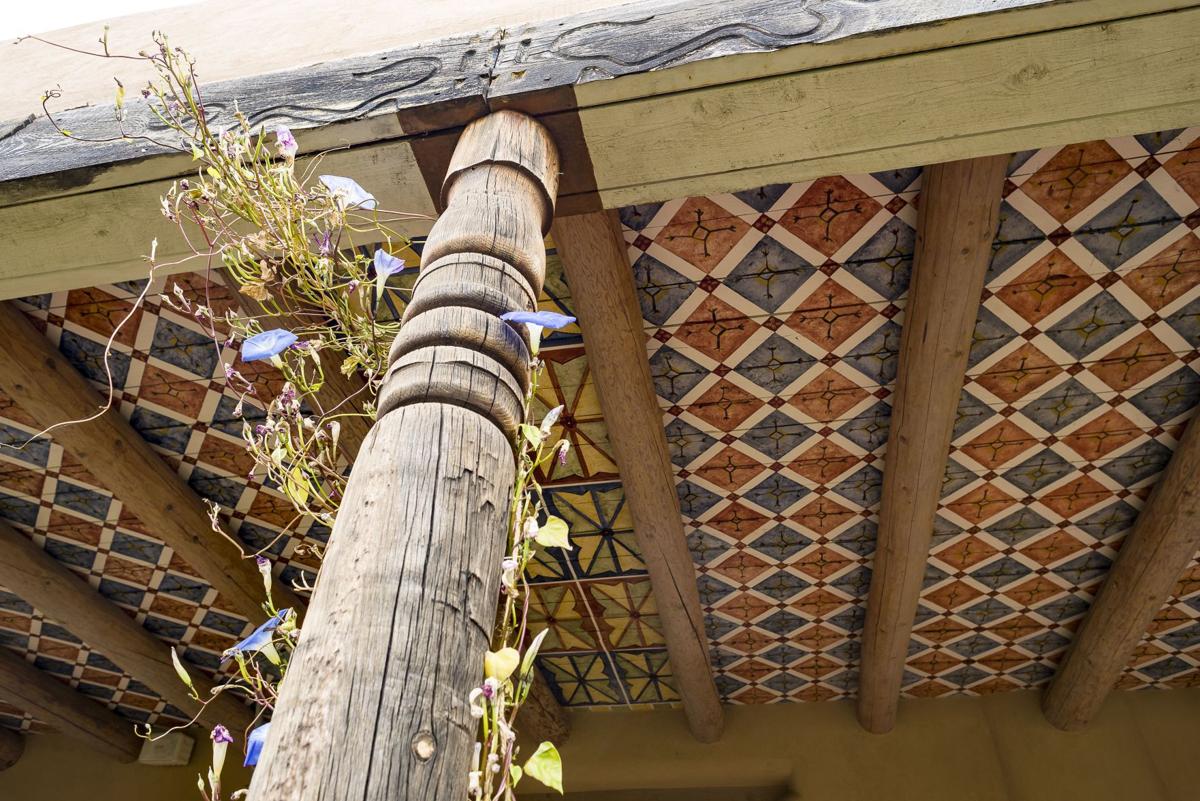 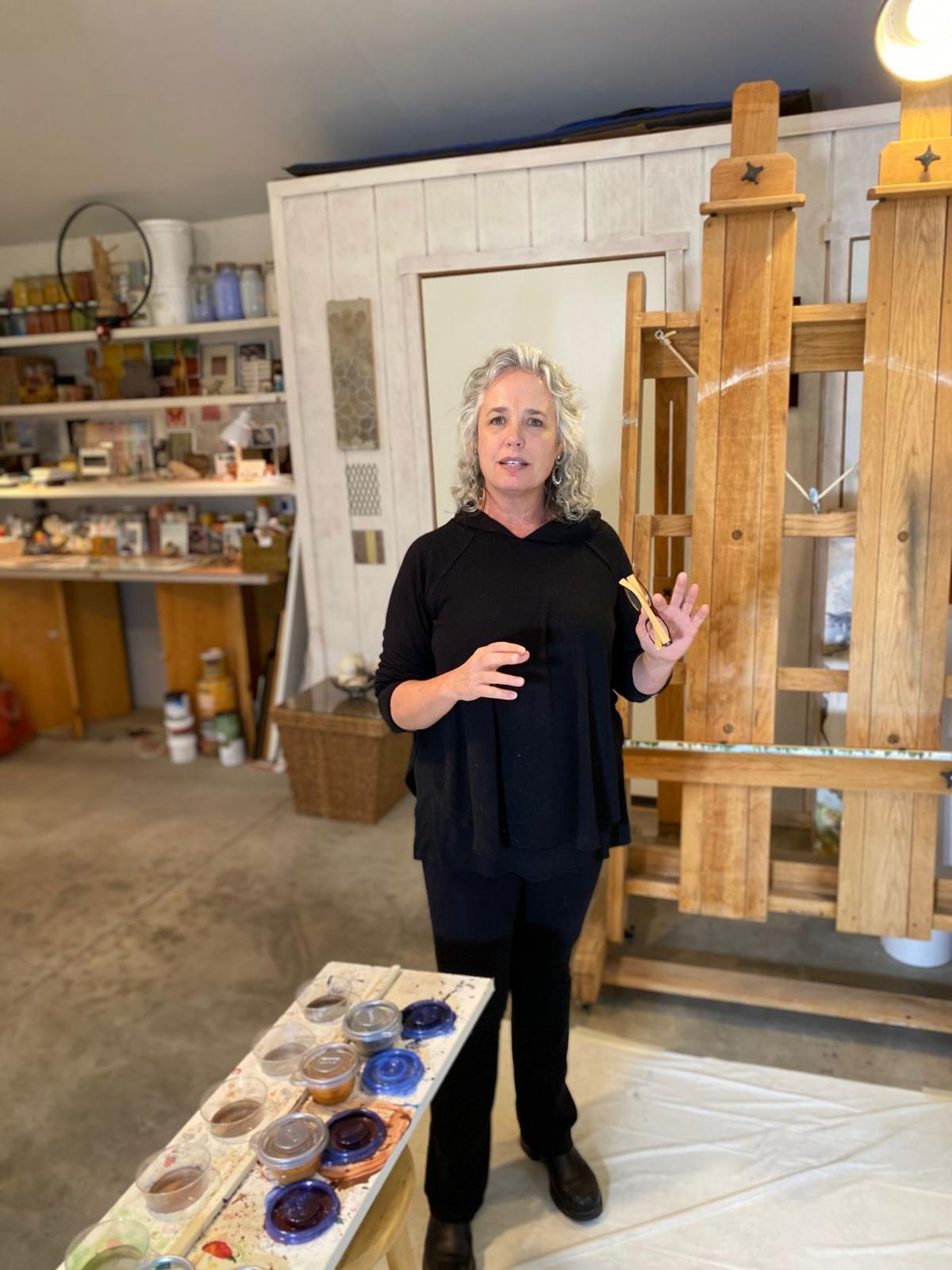 Clockwise from left: Pamela Platt in her studio; paints, paints, paints; the artist showing a palette of clay paint colors; and brushes and treasured objects on a table in the studio 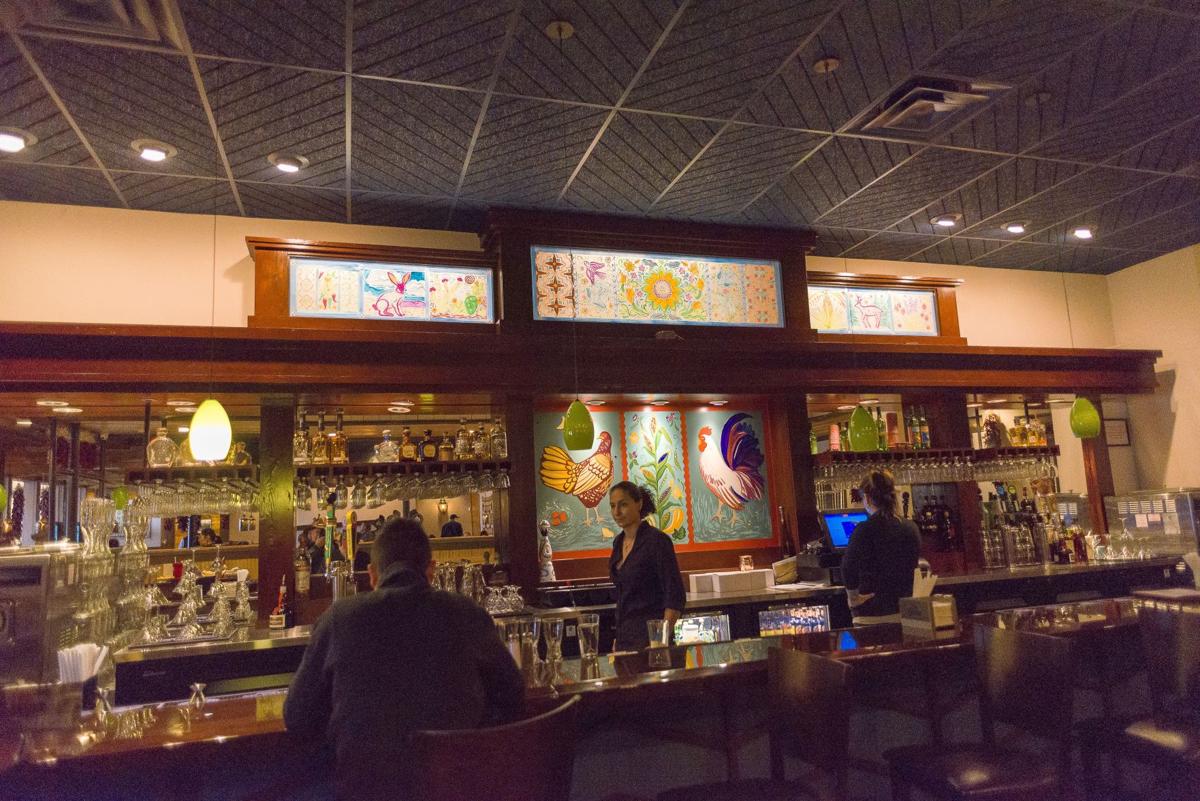 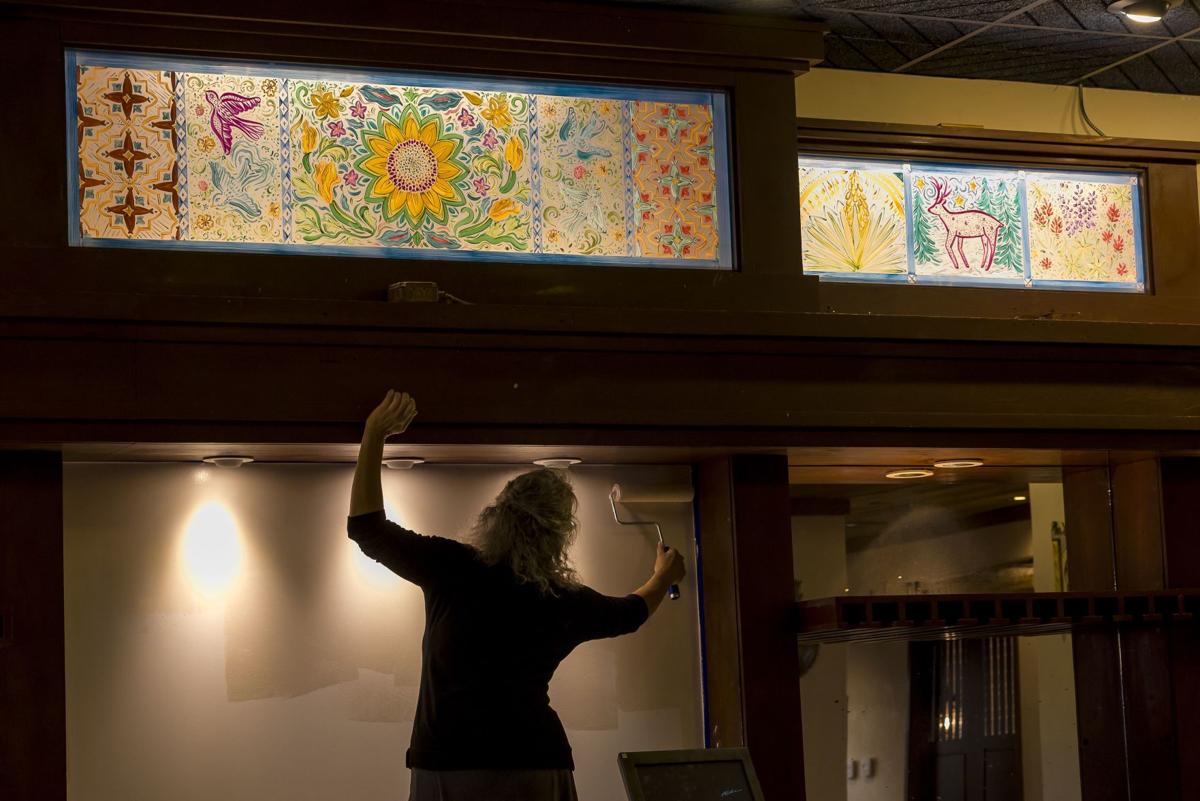 Pamela Platt working on art at Tomasita’s Restaurant in Albuquerque

A studio view: brushes and treasured objects on a table

Clockwise from left: Pamela Platt in her studio; paints, paints, paints; the artist showing a palette of clay paint colors; and brushes and treasured objects on a table in the studio

Pamela Platt working on art at Tomasita’s Restaurant in Albuquerque

Pamela Platt is equally at home painting fantastic designs in restaurants and fixing cracks in plaster walls. When asked if she considers herself to be an artist, a craftsman, or an artisan, she said, “Probably all three.”

The 30-year New Mexico resident recalled, “I trained in art, but in order to make a living, I learned how to hang sheetrock and skim coat and use a paint roller, and that expanded into learning how to paint large-scale. That’s what I’ve done for 34 years.

In her earlier years in New York, she worked as a decorative painter specializing in glazing techniques. She did faux-marble floors and gained expertise in trompe l’oeil: flat sheetrock bursts with dimensionality through her skilled use of shading. “One of the last commissions I had in New York City was a huge ceiling of an apartment at 1 Sutton Place. It looks like plaster relief with coves and insets and in the center was a huge opening to a sky with birds.”

These days she typically works directly with clients and builders such as D Maahs Construction. On a recent December morning, she was at a jobsite in Santa Fe. “There’s a shower that got installed and they wanted the edges painted to match an adjacent surface. Sometimes people bring their shutters or whatever that I can work on in my studio here.”

One example was a salvaged door that was purchased at La Puerta. Most of it was painted on a Tibetan Buddhist theme, but there was one blank panel. She convinced the client that something belonged there, so the door was brought to her studio, where she painted some lotus imagery using a color theme similar to the rest of the door.

One wall of her studio has paintings of an obviously creative character. One with colorful images of a bear and a badger and a cat is hers. Others were not made by the brushes of others.

“I’ve been doing what I call process painting for 20 years,” she said. “I use this with people who come here once a week, from 9 to 3, to paint. It’s not about the final product. You date what you do and put it away and over time you can see threads evolving.” She says that artwork is a good balance for the quite technical nature of her commercial work. “The decorative painting is usually on a jobsite. I’ve painted on wood and plaster and brick and sheetrock.”

The graduate of Rhode Island School of Design studied fresco work — the art of painting with natural pigments on wet plaster — at the New School in New York.

When she came to Santa Fe, she broadened her artistic context to encompass the place and peoples. Bill Lumpkins, the architect and artist, was one of the first people she met.

“In his later years he painted every day as a meditation practice,” Platt said. “I love his abstract watercolors. And Bill introduced me to some of my first clients here who became good friends of mine and also deepened my understanding of Native American, Mexican, and Spanish influences in the architecture and design of this region.”

Besides her work for homes in Santa Fe, Albuquerque, and Taos, she has done commissioned painting for Atrisco Café & Bar, the Palace Restaurant, the Las Campanas Club House, Ten Thousand Waves, and Tomasita’s new restaurant in Albuquerque.

Her extensive work at Tomasita’s includes hand-painted glass that was inspired by the painted windows in La Fonda’s restaurant by Ernest Martinez, the hotel’s longtime (but now retired) resident artist.

She described a repair to a 1936 Dorothy Stewart mural at Nedra Matteucci’s residence. “The piece in an alcove had water damage. The builder that Nedra uses called me in and I researched it and figured out what was happening and how to remove the silt and do the repair as authentically as possible.”

Platt has painted in clays and has collected earth colors — reds, greens, and yellows — and made milk paints out of those. At one point in her New Mexico career, she became a certified applicator of American Clay finishes.

The reference materials in her Santa Fe studio includes a chart of Bioshield clay paint colors. “I had a client who was sensitive to chemicals and had the whole house done in American Clay and she wanted a mural in her meditation room,” Platt said. “I worked in these clay paints and did a cherry blossom tree.”

That was an example of situations where the artist bounces off an idea from a client. “Sometimes I’ll meet with clients with a definitive idea, for example for a tiled ceiling because they’ve been going to Mexico for 30 years. Others will have tearsheets from magazines. I’ll often ask them to do that to help develop their idea, then I’ll figure out how to help that idea along.

“I like working directly with clients because I feel everybody has that in them but often just don’t know how to tap into it. It’s bringing the artistic realm into their lives. I love to create a space where they just feel so good.”

Find out more at pamelaplattstudio.com.