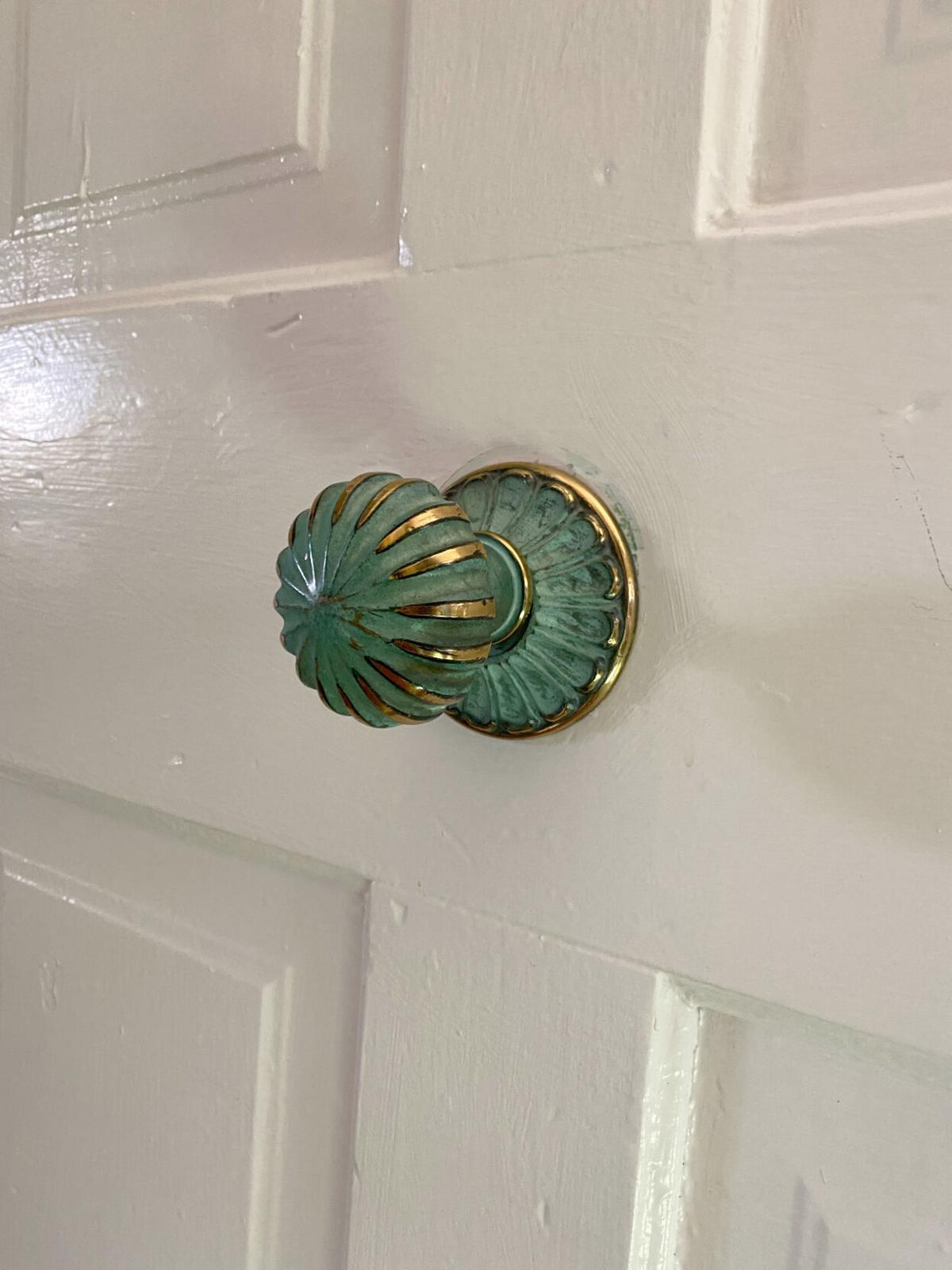 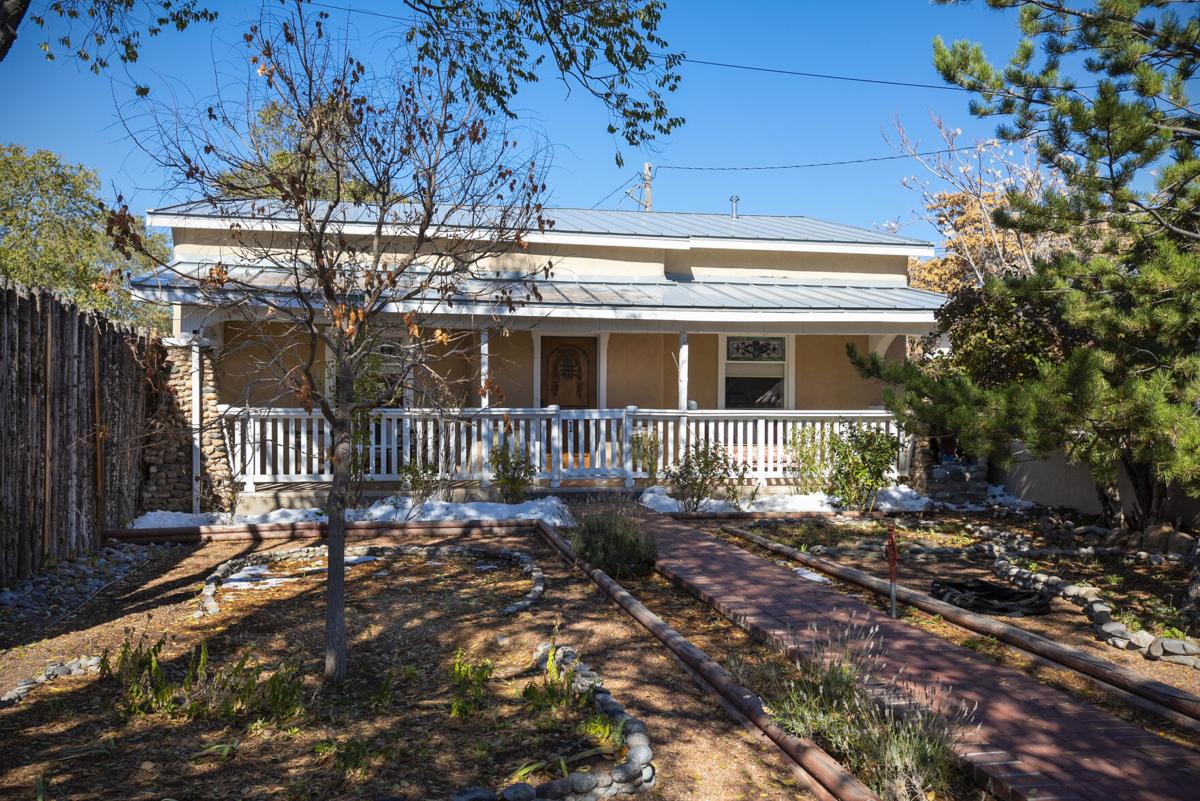 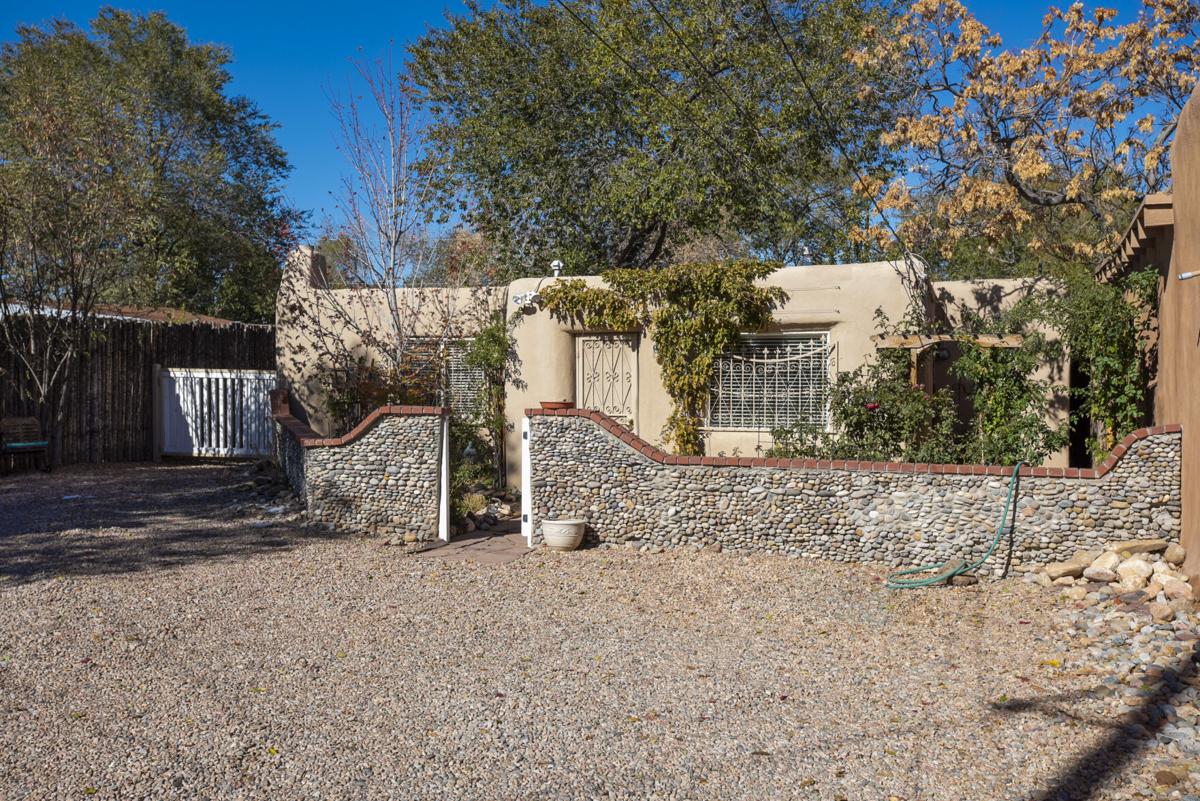 The self-sufficient guest house, an adobe building dating to the 1940s 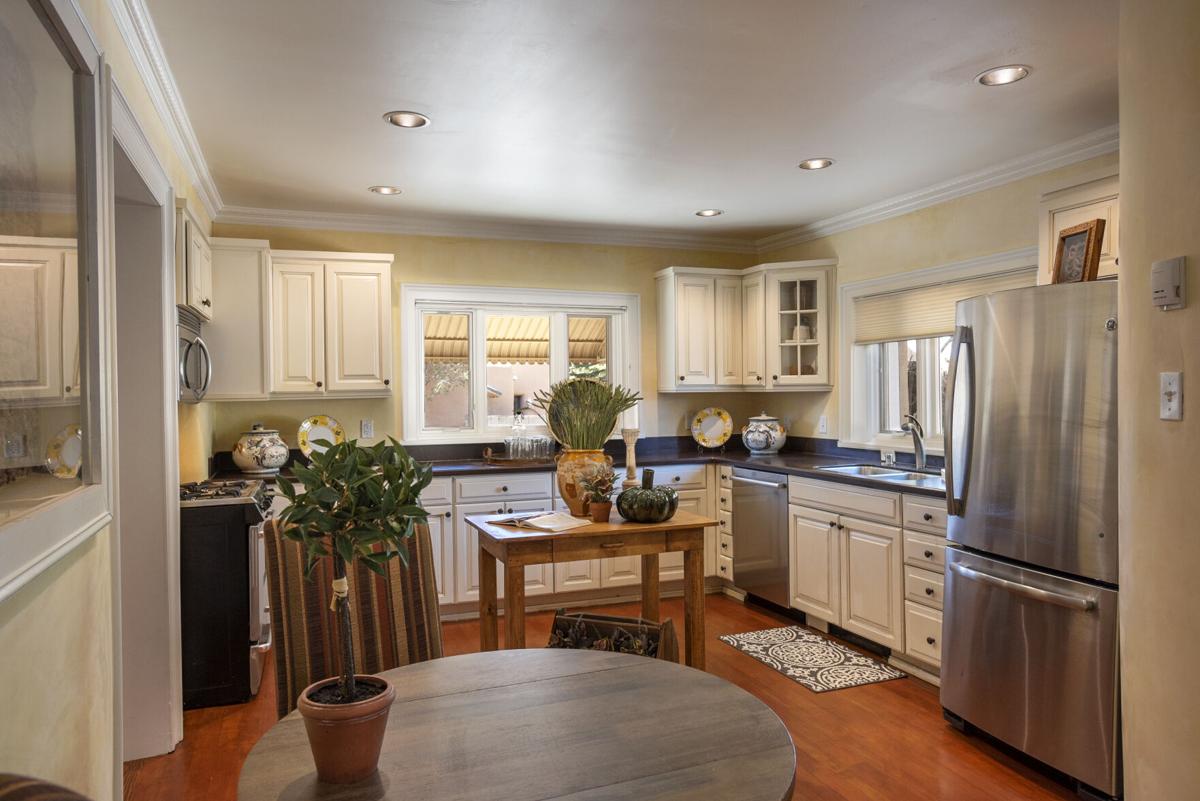 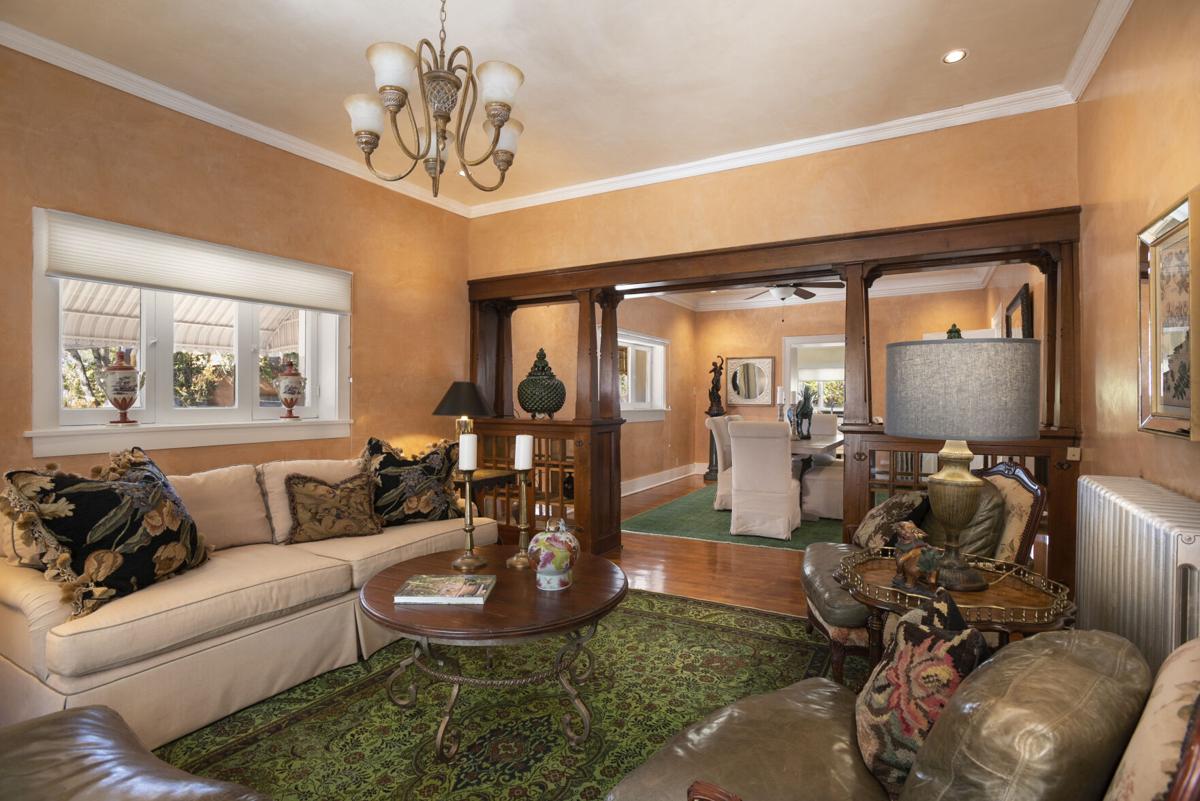 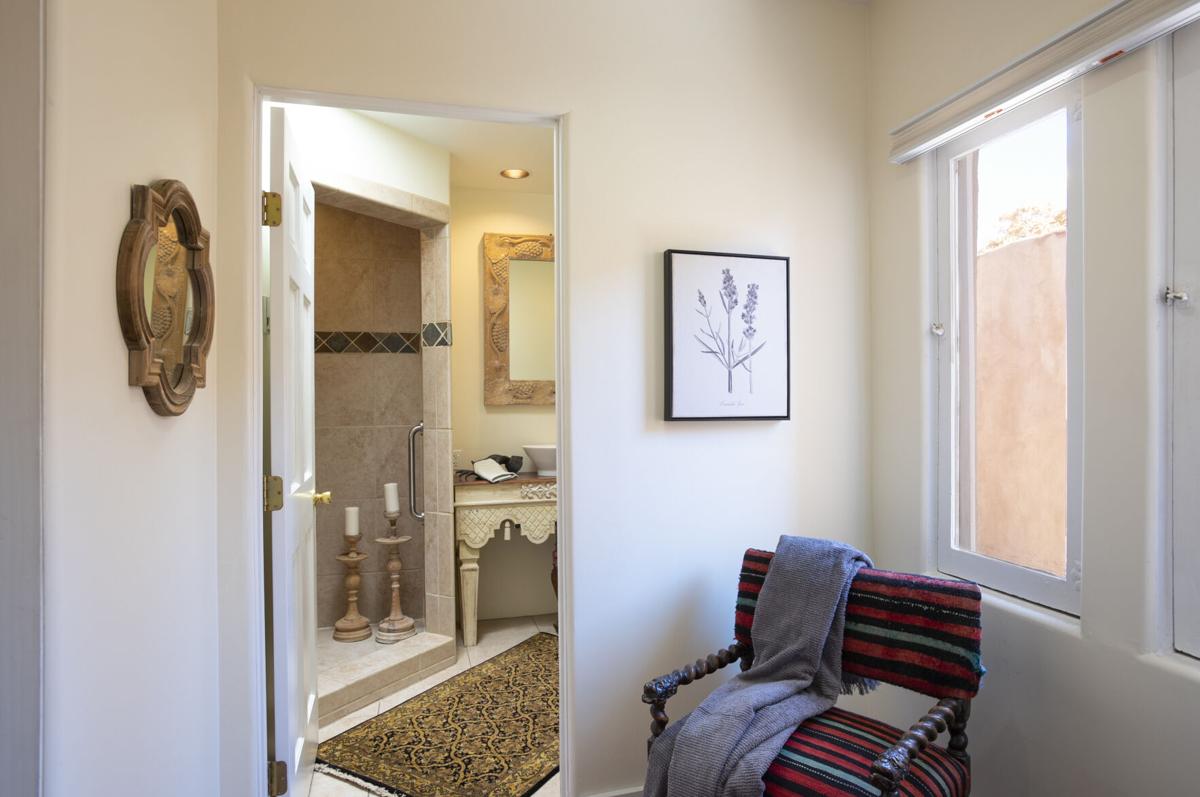 Entrance to the master bathroom 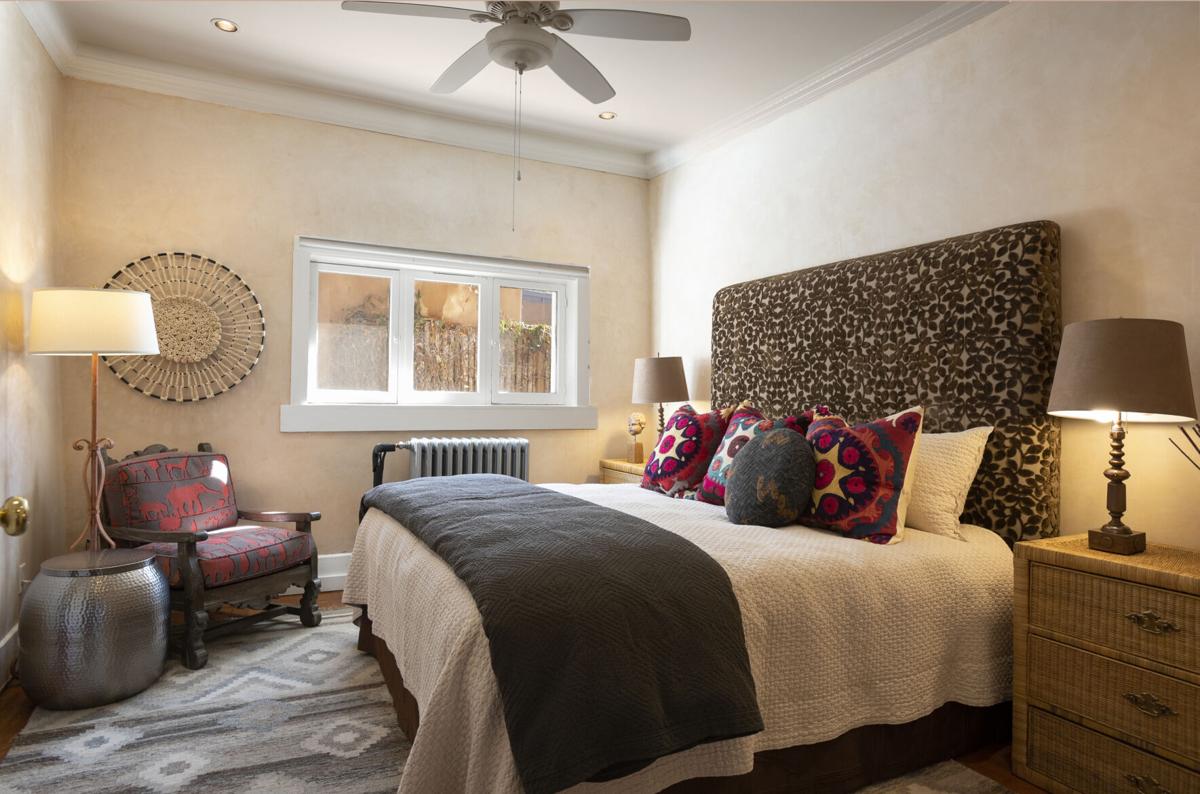 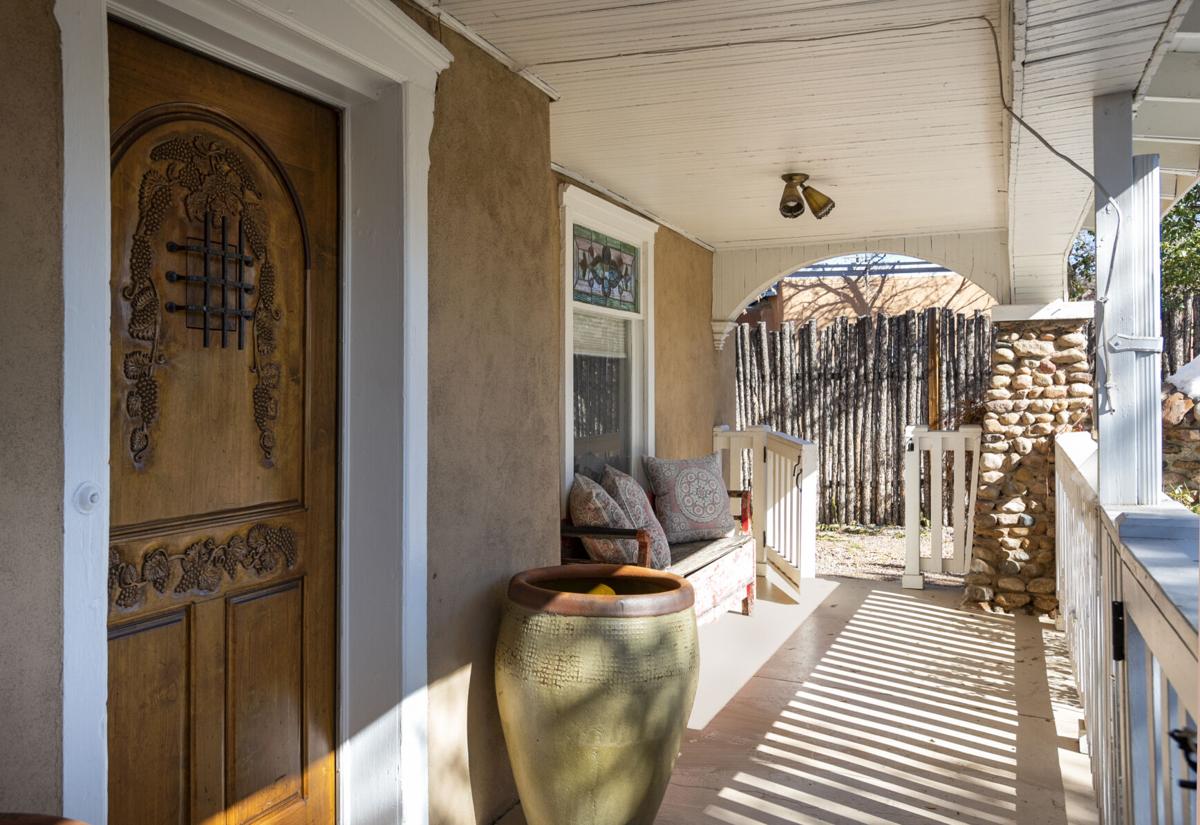 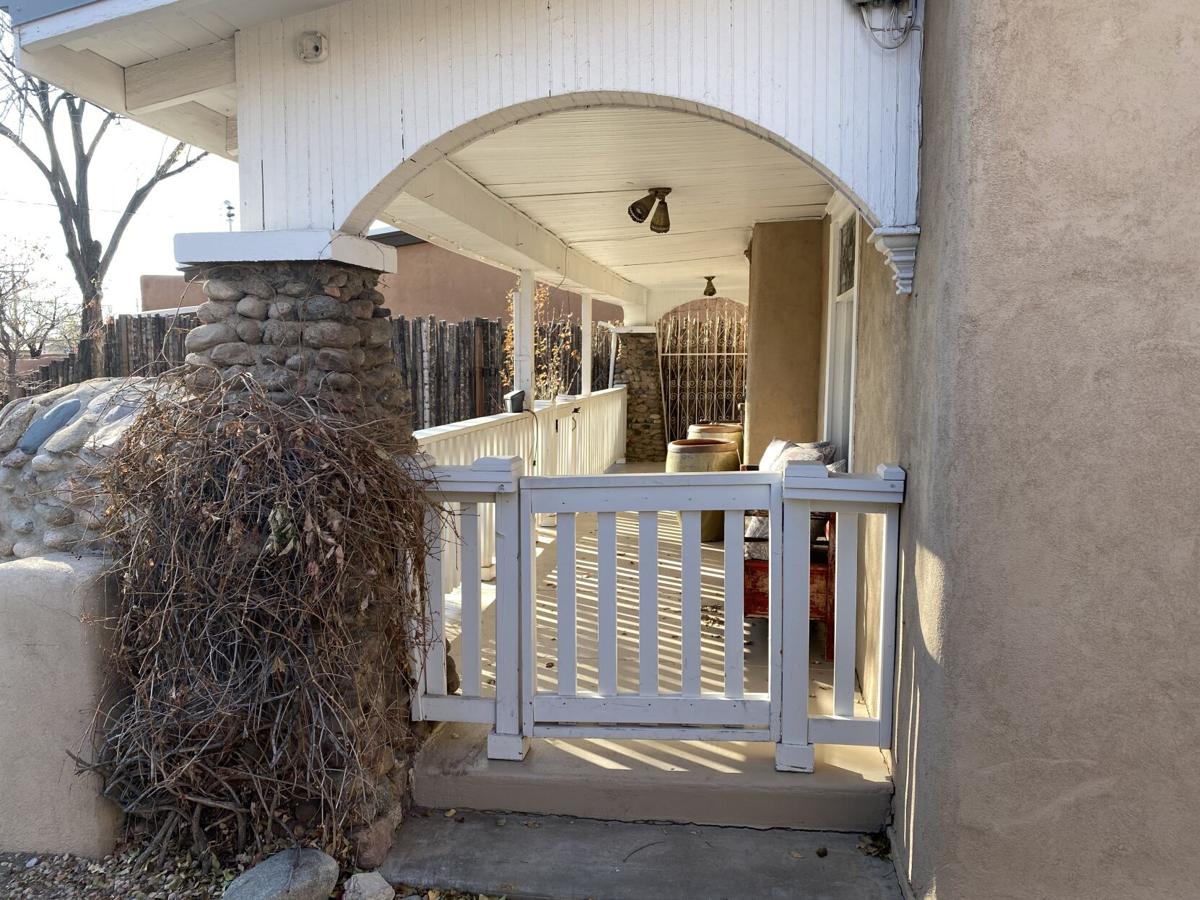 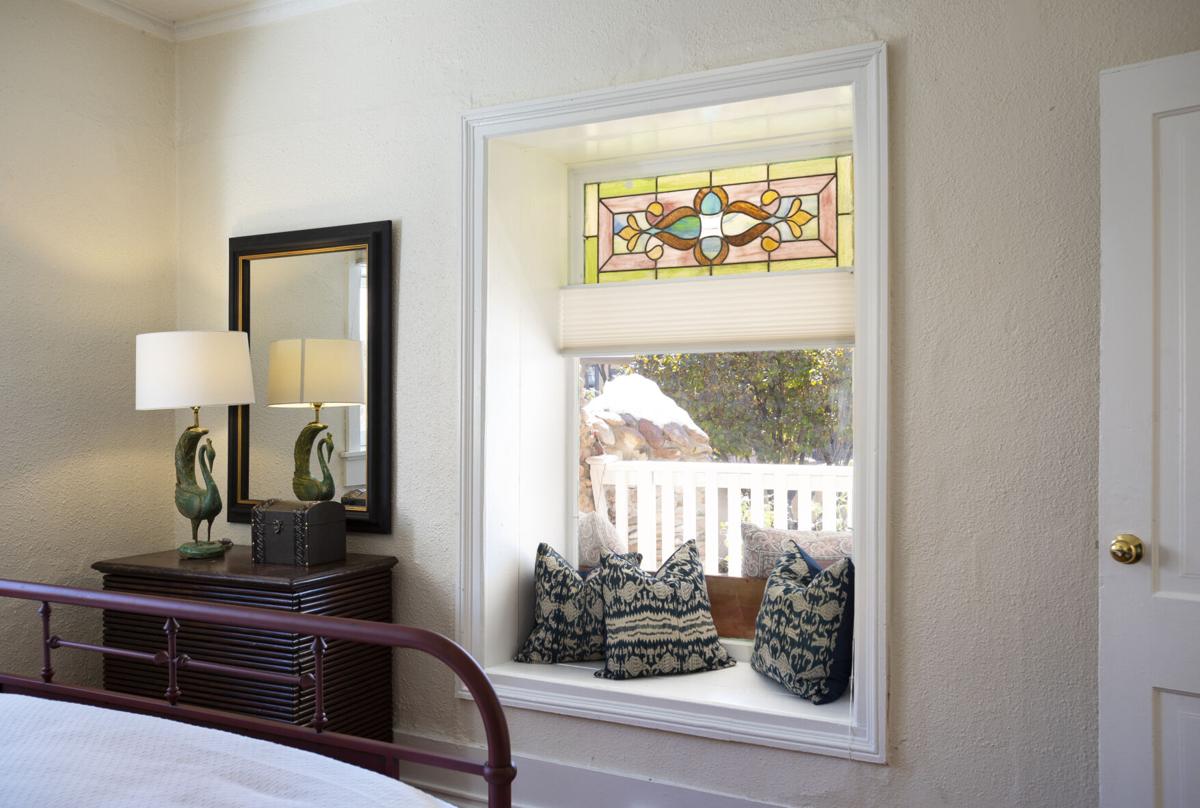 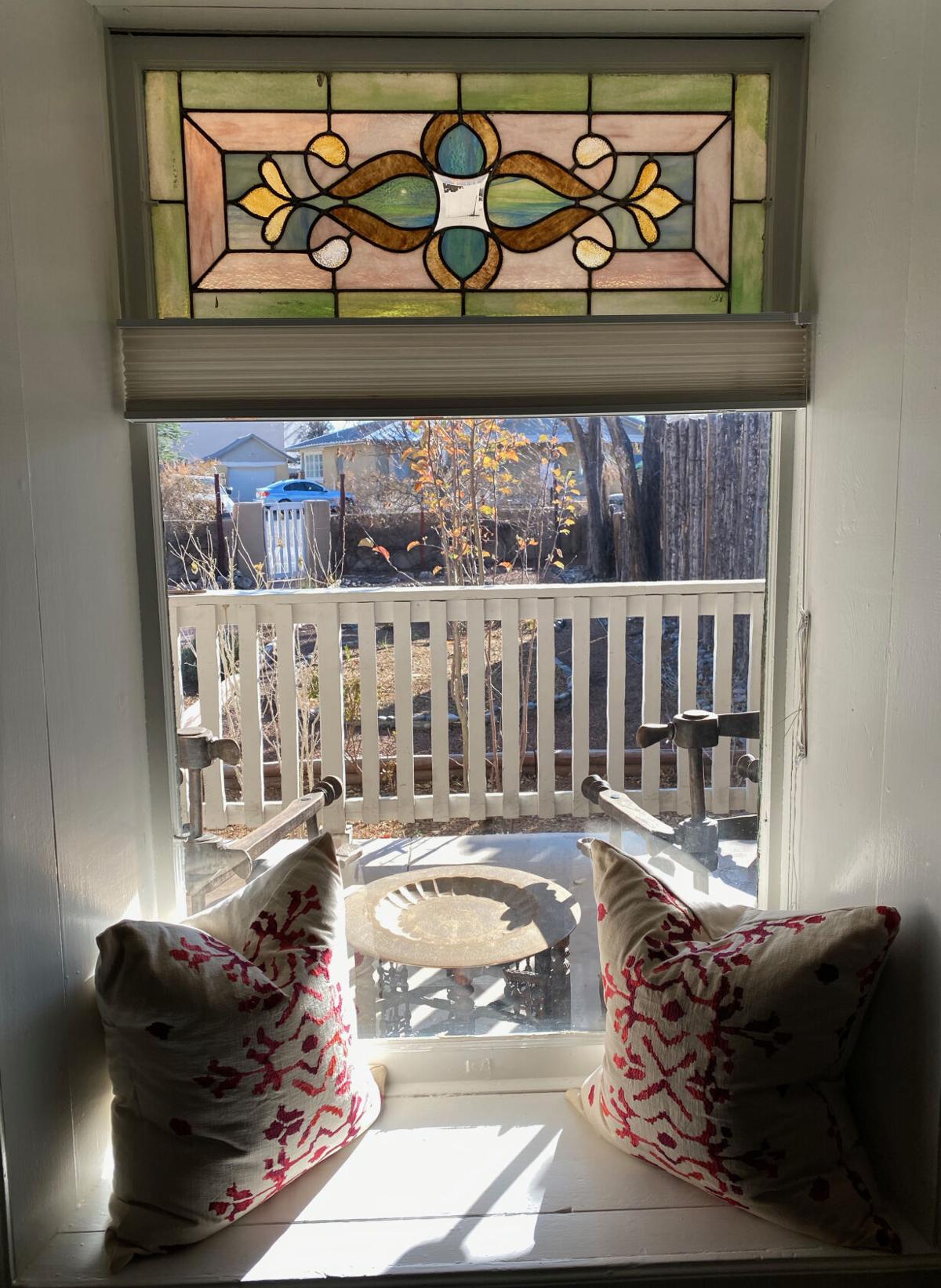 Window detail of the adobe home at 549 Agua Fria Street 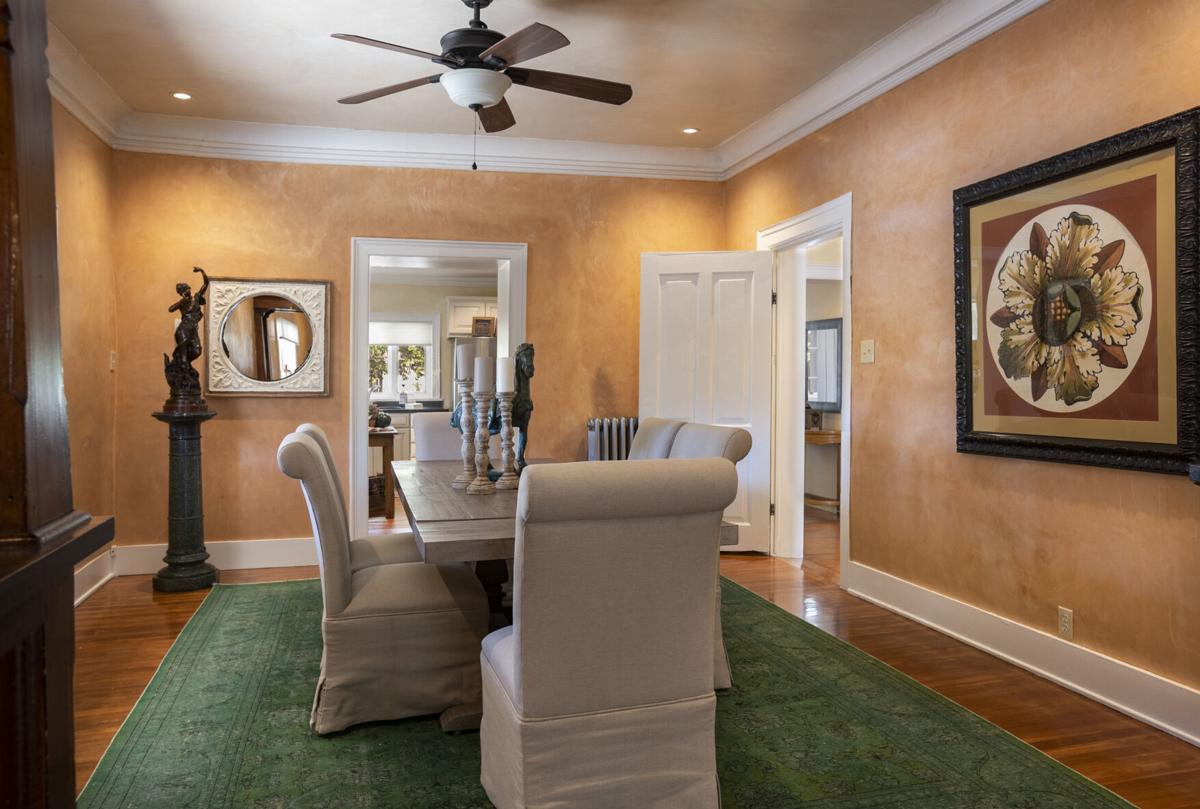 The self-sufficient guest house, an adobe building dating to the 1940s

Entrance to the master bathroom

Window detail of the adobe home at 549 Agua Fria Street

This is a wonderful old Santa Fe house. It holds “Significant” status in the Santa Fe Historic District and the owner has spent the last decade lovingly restorating the home to the original design. She removed layers of wallpaper and some false walls and lowered ceilings that had been put in by previous residents. She also stabilized the adobe walls, especially in one corner of the living room that required a little more work.

The owner (who requested anonymity) replaced the roof, in the process removing the six inches of earth that was the original insulation. She replaced the old boiler and redid all of the plumbing and electrical systems; made repairs to the original wood floors; and did the hard plaster on the walls throughout the house. She also added a second bathroom (off of the master bedroom) and in the process restored the back door to its original place.

Now with one hallway down the center, from front door to back, the house looks the way it did when it was built sometime between the 1860s and 1908. There are no vigas. It was built with a plastered ceiling. There are beautiful crown moldings, some with egg-and-dart detailing, and exceptional woodwork in the bookcases, doors, and window sashes.

At the junction of the living and dining rooms, the access is flanked by twin cabinets, in dark hardwood, with glass fronts, below posts of carved wood. All of the fine wood detailing is a hallmark of buildings by the Hesch Brothers, who likely built this house at 549 Agua Fria Street. They are also known for the Hesch House on Read Street, the Eugenie Shonnard House on Paseo de Peralta, the Catron Block on the Plaza, and St. Catherine Indian School.

Hesch descendants still lived in the house across the street when the owner purchased 549 Agua Fria in 2002. “The restoration has been a labor of love, but it’s time to pass it on to someone else who can really enjoy it,” she said. “Material things as they come into our lives are a gift and then we pass them along to others who need them.”

A Historic Building Survey performed by the City of Santa Fe in 1985 calls this the Hilario Ortiz House. According to references in the Santa Fe New Mexican, Ortiz was a superintendent of county schools in 1912. Three years earlier, on Oct. 12, 1909, the paper printed this account: “Last night was a rather exciting one in the neighborhood of Attorney H.L. Ortiz’s house on Agua Fria street. Ortiz and his wife had been to the reception tendered Rev. E.C. Anderson and upon returning home retired. Shortly afterwards they heard a peculiar noise and soon discovered that a man was seeking to raise the window and gain entrance to another room. Ortiz seized his revolver and attired in his robe de chambre slipped out the rear door and making his way around the house came upon the fellow who was seeking to break in. At the point of the revolver Ortiz commanded him to throw up his hands and in this fashion the burglar was marched to the local jail. The man gave his name as Ramon Carrera. Apparently he is a stranger in town. This morning he was bound over to the grand jury in the sum of $500.”

The house boasts an advantageous location, two blocks west of Guadalupe Street. A brick walkway leads from the street wall, through the front yard and to the front portál with its picket railing flanked by two river-cobble piers.

The beautiful, carved front door has a fancy knob right in the middle, and a postigo or peek-through. The public spaces (living room, dining room, kitchen) are on one side of the central hallway and the bedrooms and bathrooms are on the other. The living-room window looking onto the porch and front yard has a deep window seat, a virtue of the thick double-adobe walls, and a stained-glass transom — as does the bedroom on the other side of the hallway.

The kitchen is equipped with modern appliances, and there is plenty of storage space. In one of the kitchen walls is a “truth window” that provides visitors with a good look at the home’s adobe structure.

A guest house in the back (which has the address 549 1/2 Agua Fria Street) was built in the 1940s and has a more traditional “Santa Fe Style” character with plank-on-viga ceilings and a corner fireplace in one of the two bedrooms. There is a full bathroom and kitchen, and a back yard with a landscaped garden and automatic irrigation system.