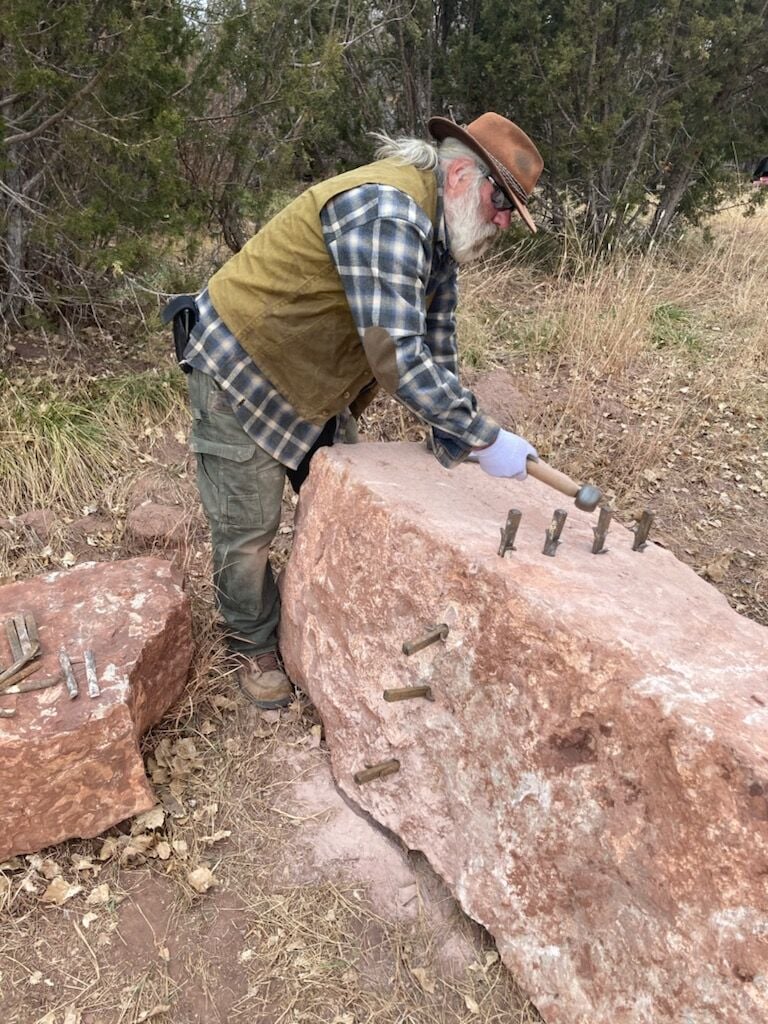 Stonemason Alan Ash at work on a recent project 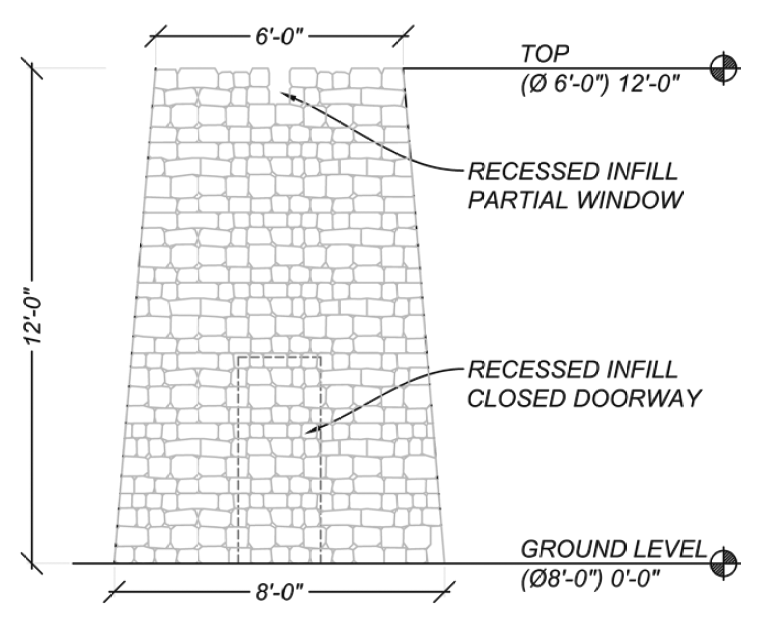 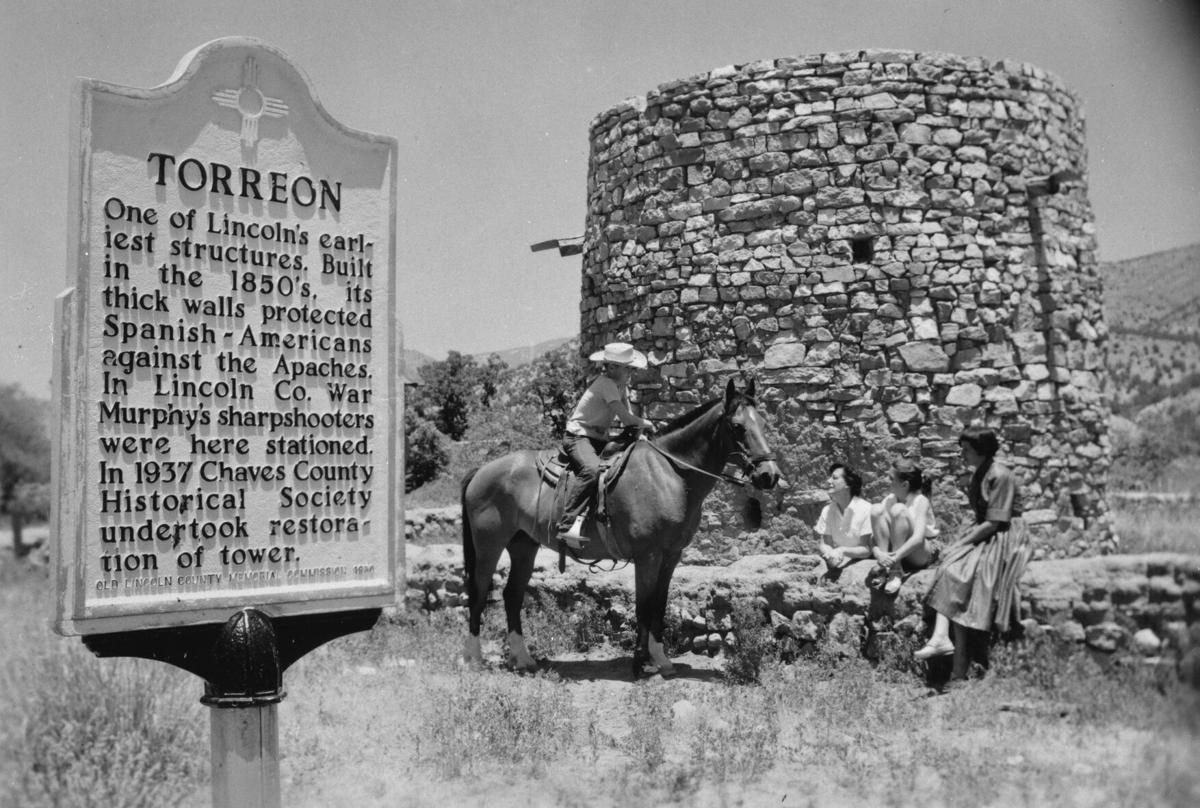 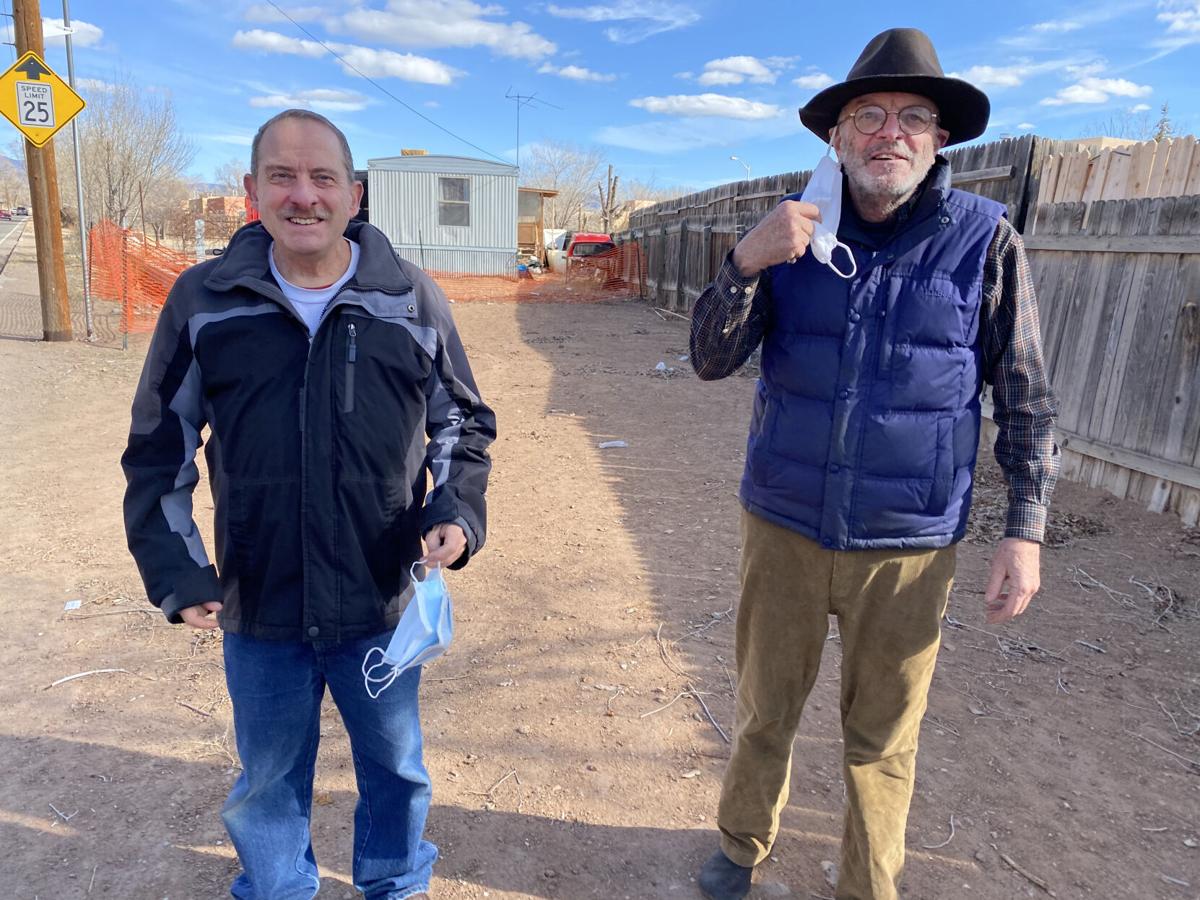 William Henry Mee and Jake Barrow at the torreón site

Stonemason Alan Ash at work on a recent project

William Henry Mee and Jake Barrow at the torreón site

This spring, Cornerstones Community Partnerships and the Agua Fria Village Association will sponsor workshops with master mason Alan Ash to build a torreón. It will mark the west boundary to the traditional historic community, and Agua Fria’s location on the Camino Real.

The tall design of a torreón honors Native and Hispanic traditions of defense against attacks by migratory tribes. The structure has antecedents in the Native world going back at least a thousand years.

Archaeologist Stephen Post said he knows of no such towers built in the Agua Fria-Santa Fe area, but added that Ancestral Puebloans did construct such features elsewhere. “For instance think Mesa Verde and Hovenweep or the tower kiva at Kin Ya’a in the Chaco world. Archaeologists speculate that the Gallina Culture towers may have functioned for defense. There are some large ones in the Llaves/Mud Springs, N.M., area near El Vado Lake, for example. I believe that the historic-era Pueblito sites of the Dinetah had tower structures as well. I think some were two-storied.”

Historian William Henry Mee of the Agua Fria Village Association said, “Lolly Martin, who was the shop manager at Rancho de las Golondrinas, is aware of torreóns at Cieneguilla and La Cienega, then we had ours here, and there were others at Arroyo Hondo and at Pecos. With former state historian Hilario Romero, we theorized that the ring of torreóns could have been used to start fires and signal when there were Apache raids.”

On May 20, 1930, the Santa Fe New Mexican reported that artist Frank Applegate had built a torreón “in imitation of those surviving at Barranca near Abiquiu, Manzano, Tesuque, Corova de Taos, Angostura above Espanola, at Santa Rita, Grant County, and near Chimayo. These two-story round towers — the upper story being gone in many cases — were used as watchtowers against the Apaches and storage places for war apparatus.”

The new Agua Fria torreón (actually a facsimile of historic torreóns), taken together with an adobe monument and sign built in 2015 at the village’s east boundary, will complete the delineation of Agua Fria’s boundaries and thereby re-establish the sense of place lost to it in the modern era, according to Cornerstones program director Jake Barrow. The identity of Agua Fria, which was originally a farming community supporting nearby Santa Fe, has practically merged with that of Santa Fe during the capital city’s population surge in the past century. Many longtime residents, some of whom trace their ancestry to original settlers in the 17th century, cherish Agua Fria as a distinct place with its own unique history.

With the possible exception of a few decades before the arrival of the Spanish in Santa Fe in 1610, the area has been occupied continuously since the late 1100s. That’s when Native people established Pindi Pueblo and Agua Fria Schoolhouse Pueblo on either side of the Santa Fe River. The two communities had perhaps 2,000 residents in the mid-1300s, according to the 2008 book Before Santa Fe: Archaeology of the City Different by Jason Shapiro.

The people lived at Pindi and Agua Fria Schoolhouse for more than two centuries. It is believed the pueblos were abandoned by about 1425, although another one just five miles or so downriver, La Cieneguilla, was occupied well into the 1500s.

According to Mee, the Spanish settlement of Agua Fria Village dates to about 1640, when Francisco de Madrid began farming here. The village, about five miles downstream of Santa Fe, lies along El Camino Real, the Spanish name for the historic trade route (first used by Indians and then the Spanish) that runs from Mexico City to Santa Fe.

Agriculture was at the heart of Agua Fria in the Spanish colonial period, then under Mexican rule during the 25 years following the 1821 independence of Mexico, then as an American territory after the U.S. takeover in 1846, and after New Mexico attained statehood in 1912.

“Sadly, the nature of Agua Fria Village changed in 1934 when water disputes with Santa Fe reduced the viability of farming,” Mee said.

Small-scale farming is still practiced and the main irrigation ditch off the Santa Fe River, the Acequia Madre, intermittently flows to the village. There were once hundreds of parciantes — members of the ditch association — including in Agua Fría, where the Acequia Madre ends. But today only one Agua Fria property, owned by the Montoya family, still has rights to that water.

In 1995, the Santa Fe County board of commissioners established the village as a traditional historic community. The board’s Anna Hansen spearheaded the torreón project.

The site is located within the lands of Eusebio Serna, at 4242 Agua Fria Road. Plans drawn by Georgina Solano, a Cornerstones intern through the International Council on Monuments and Sites (US/ICOMOS) show a “free-draining dry laid stone tower,” eight feet diameter at the base tapering to six feet at the top, and filled with fitted stone.”

Barrow said Cornerstones is working with brothers Lee and Dave Romero, who have a quarry in Villanueva. “The quarry does some of the prepping; we order stone of a certain size and dimension. But the final cutting and fitting will happen here,” he said. Due to safety concerns, there will be no hollow center or interior stairs. The torreón will be solid stone. “We want to include a suggestion of a door and window, but the final aspect of this is undecided,” Barrow said. “This is really a kind of arts-and-crafts piece to replicate the idea of a torreón using an ages-old building technique, which will impart permanence and significance to this entrance area of Agua Fria.”

There will also be a sign, similar to the 2015 marker, and new latilla fencing and other improvements to the site. “This will be a nice little pocket park for this community,” Barrow said.

Stonemason Alan Ash will lead volunteer workshops to construct the dry-laid stone torreón, tentatively between March 22 and April 30. COVID-19 safety protocols will be in force. Volunteers and interested parties are invited to contact Cornerstones at 505-982-9521.

On behalf of the Agua Fria Village Association, thank you Paul for this article.

I would like to add to the story, that the Agua aria Village area at the Pindi Pueblo was inhabited as far back as 3,000 BCE. Along the Santa Fe River in the area pit houses dating back to 7,000 BCE have also been found.

Agua Fria itself we have dated to 1640, but that original inhabitant Francisco de Madrid left El Paso in 1603 and may have dropped off the expedition to San Gabriel as early as that date.

Although the totals of the 1914 State Engineer maps show 254 acres, when the area is added up it is actually 777 acres and additional acreage was not irrigated but used for drylands pasture. The total amount of irrigated water was about 3,600 Acre Feet Annually. The 1934 date is actually 1945.

Thanks for sharing this good news about Agua Fria Village and its history, Paul!