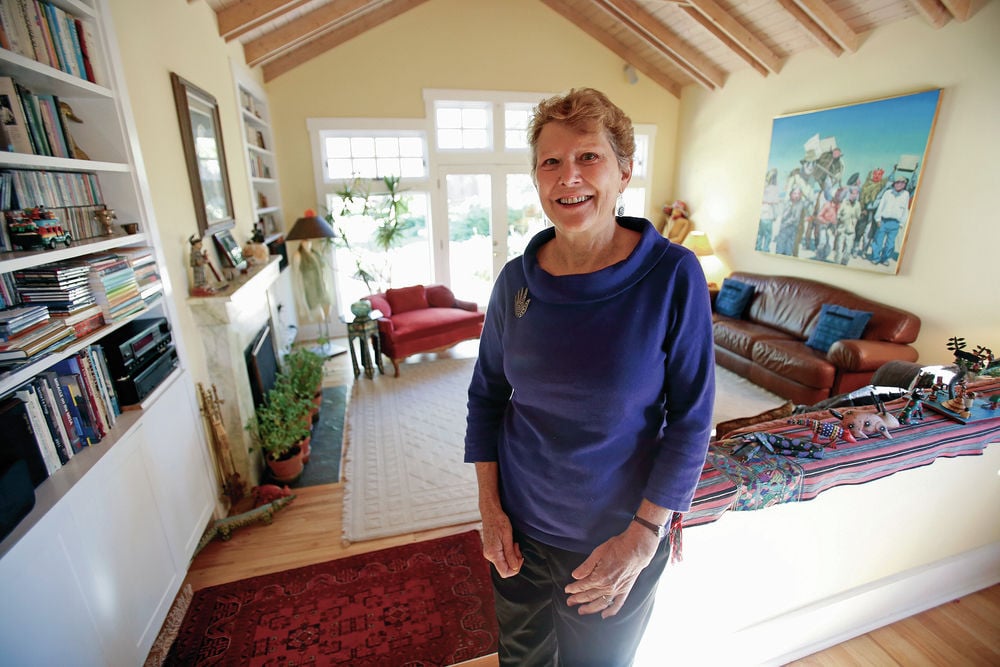 Meredith Machen, president of the League of Women Voters of New Mexico, is one of The New Mexican’s 10 Who Made a Difference for 2015. Luis Sánchez Saturno/The New Mexican 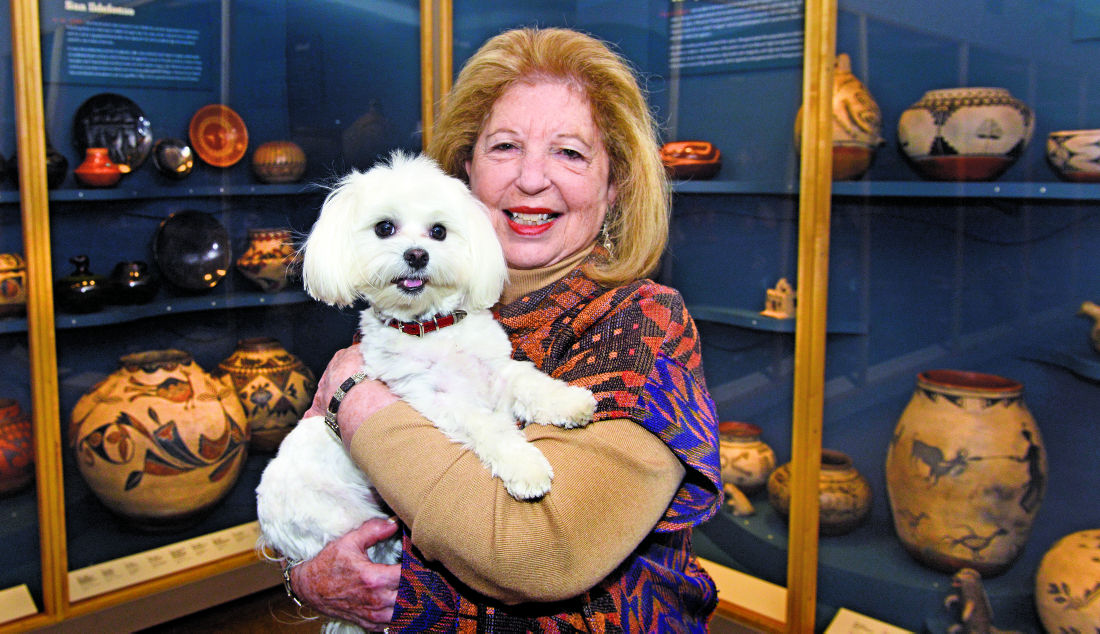 Jane Buchsbaum, a 10 Who Made a Difference recipient, with Beau, her 3-year-old Maltese, in The Buchsbaum Gallery of Southwestern Pottery earlier this month. Buchsbaum has been a docent and volunteer at the Museum of Indian Arts & Culture for 24 years. Clyde Mueller/The New Mexican

Meredith Machen, president of the League of Women Voters of New Mexico, is one of The New Mexican’s 10 Who Made a Difference for 2015. Luis Sánchez Saturno/The New Mexican

Jane Buchsbaum, a 10 Who Made a Difference recipient, with Beau, her 3-year-old Maltese, in The Buchsbaum Gallery of Southwestern Pottery earlier this month. Buchsbaum has been a docent and volunteer at the Museum of Indian Arts & Culture for 24 years. Clyde Mueller/The New Mexican

Meredith Machen is not a state lawmaker, but when the Legislature is in session, she might as well be. Given the late nights, it’s lucky that she just happens to live a few blocks from the Roundhouse in the South Capitol neighborhood.

As president of the League of Women Voters of New Mexico, she is at the Capitol almost every day to follow bills that are of interest to the pro-democracy organization and other pieces of legislation that interest her. And when she can’t be there, she watches the floor sessions and committee meetings online, sometimes using both her own computer and her husband’s if there is more than one session going on at the same time. She even attends the meetings of interim committees.

Machen, who retired in 2008 after 38 years of teaching, devotes a lot of her time to the state’s business. She represents the league on bills on which it has taken a position. She also helps organize workshops on lobbying and teaches witnesses how to testify in front of committees.

It is for that civic involvement and passion that Machen has earned one of The New Mexican’s 10 Who Made a Difference honors for 2015.

In September, she presented suggestions to the Legislative Council’s office on improving efficiency. For example, Machen recommends offering members of the public a “Request to Speak” form, so they could submit comments to lawmakers without traveling to the Roundhouse and waiting for hours to address committees. She also would like to see the Legislature hold public hearings on all bills, amendments and changes to existing statutes, and better systems for letting the public know which bills are being discussed in real time. If airports can update flight information, she figures, the Legislature can, too.

Machen plays a major role in assembling the Voter Guides that the League of Women Voters publishes in advance of elections.

She also chairs the state league’s committee on charter school regulations. As the number of charter schools has proliferated, many state leagues are studying them. In Washington state, for example, the Supreme Court expelled the charter school movement from the state’s public education system in September, saying the privately run schools are not public schools under the state constitution. Their boards are not elected by the public and accountable to the people.

A bill that the league in New Mexico is looking at would take away the rural small schools funding that all charter schools receive — even if they are online institutions or located in urban centers. A Legislative Finance Committee report found that from fiscal years 2008 to 2015, charter schools received 46 percent of the funding increase while educating 7 percent of all students — $98 million compared to $114 million.

There is a lot of profiteering in the charter school movement, Machen said. The parents of charter school students are undoubtedly caring, she said, but the movement is “frankly re-segregating America.” New Mexico is spending about $14 million this year on building leases alone for charter schools, and “there’s a perfect storm brewing,” she predicted.

Speaking for the league, Machen added, “We’re committed to public education. It’s the key to our democracy. When you see this re-segregation going on, it really hurts the schools. We can’t have all these parallel universes. It’s not efficient, and it really exacerbates the problem.”

The local league is also lobbying for a state ethics commission and working with the national league on a project centered on money in politics.

The league has a petition pending at the state Supreme Court challenging a requirement that certain amendments in the 2014 election required a three-fourths majority vote in order to pass. One concerned allowing school board elections to be held at the same time as other nonpartisan elections. “We are saying it passed,” Machen said, explaining that the measures did win a simple majority of the vote.

This is the kind of service that Machen, a Connecticut Yankee, was exposed to in her childhood. Her mother hosted league meetings in their Stamford home and worked on local children and family issues. She was a frequent visitor to the United Nations, then in its early days, and often invited international visitors to the house. An arts reviewer, Machen’s mother also regularly took her four children to cultural events, such as the opera and museum exhibitions in New York City.

“A lot of having those experiences opens your eyes,” Machen said. “I am committed and passionate about making sure other people have these opportunities as well.”

She was one of a handful of people who worked with William Witter to found the Santa Fe Community College and taught English and human development courses there for 25 years. She administered numerous programs aimed at helping disadvantaged members of the community. For example, soon after the founding of the college, she created Literacy Volunteers to teach adults to read.

“Students were coming, wanting an education, and we didn’t have classes low enough to help them,” she said, “even Santa Fe High graduates who couldn’t read. We needed volunteers for English language learners and also with students who couldn’t read.”

The organization is still going strong.

Machen ran the northeast region for Enlace New Mexico, an initiative to increase educational opportunities for Latino students. And she began the alternative education licensure program at the community college, which today, she said, supplies a third of all new teachers in the Santa Fe Public Schools.

Many of her mentees are “paying it forward,” she said. One is working with the Agua Fría Children’s Zone and another is a Dreamer (a beneficiary of Barack Obama’s Deferred Action for Childhood Arrivals program), a University of New Mexico student and a trainer for Enlace interns who work with legislators.

In addition to being president of the state league, Machen chairs its committees on education, voter services (which she promoted while at the community college) and immigrant rights. Of all the awards she has won, she is especially proud of receiving the 2014 Premio Sin Fronteras from the immigrant rights group Somos Un Pueblo Unido, which she displays on her home mantelpiece.

“What I really love about Meredith’s approach is her willingness to pursue any angle to achieve her ends,” said Sally K. Walkiewicz, who is a literacy volunteer.

Janet Williams, a league member and friend of Machen, said Machen has been "the consummate educator and volunteer for her entire adult life."

And JoAnn Sartorius, who has known Machen for 30 years, said, “More amazing to me is how every individual she meets receives the gift of Meredith’s sincere attention. She immediately tries to see how she can advocate, assist, give her time and energy or connect each person to someone who can help. She always follows through.”

10 Who Made a Difference: Deacon has a spirit of giving

For the past 30 years, The New Mexican has continued a Thanksgiving tradition of honoring local people who give back to the community. Stories about the 10 Who Made a Difference for 2015 begin today with Enrique M. Montoya, a Santa Fe native and a deacon at St. Anne Catholic Church.

For the past 30 years, The New Mexican has continued a Thanksgiving tradition of honoring local people who use their time, talents and passions to give back to the community. Since this feature first started in 1985, The New Mexican has honored more than 300 people, all nominated by their friends and neighbors. But it’s not about them, it’s about inspiring all of us to reach outside ourselves and find a way to help heal the world.

10 Who Made a Difference: Volunteer helps sexual assault treatment center cut through the red tape

Ray Lopez's volunteer efforts on behalf of the Solace Crisis Treatment Center over the last decade have earned him a spot as one of The New Mexican’s 10 Who Made a Difference this year.

10 Who Made a Difference: BMX rider turned his passion into trails at La Tierra

The work of Daniel Coriz and other volunteers has provided an exciting trail system for BMX and dirt biking.

Since her kids have grown, a bedroom in Deborah Simon’s Española home has become the command center for an ongoing string of community development projects in the Mayan villages of Guatemala.

Meredith is terrific, and the League's work to engage community members in their government and to make government more transparent is a gift. Thank you for everything you do, Meredith!

Reading this piece, what I see is a simply extraordinary person who has devoted her life to improving the lives of others, and to helping our community.
This honor ( and it is indeed an honor) , is well deserved. I admire her greatly.

If you, Doc Johnson, think that someone you know is deserving of such an honor, then do tell us about them. Let us know what they have done to make a difference.

Always instructive to see who The SFNM picks for these "honors". This one really stands out, a partisan, left wing political operative (the LWV are the most consistently left wing group that has ever claimed to be "non-partisan") all her life it appears. I doubt The SFNM would ever award this "honor" to a conservative partisan political operative, that is instructive as to how they operate and what biases and prejudice they have built into their very core.

Dear Doc Johnson - even though you are biased against this SFNM pick, you would probably agree that Mrs. Machen has done a lot of good work that any Republican - or Democrat or Independent - would be praised for doing. The Literacy Volunteers alone contributes to the good of our whole society. And, do you know for a fact that NO Republicans have ever been awarded a "Those who make a difference?"