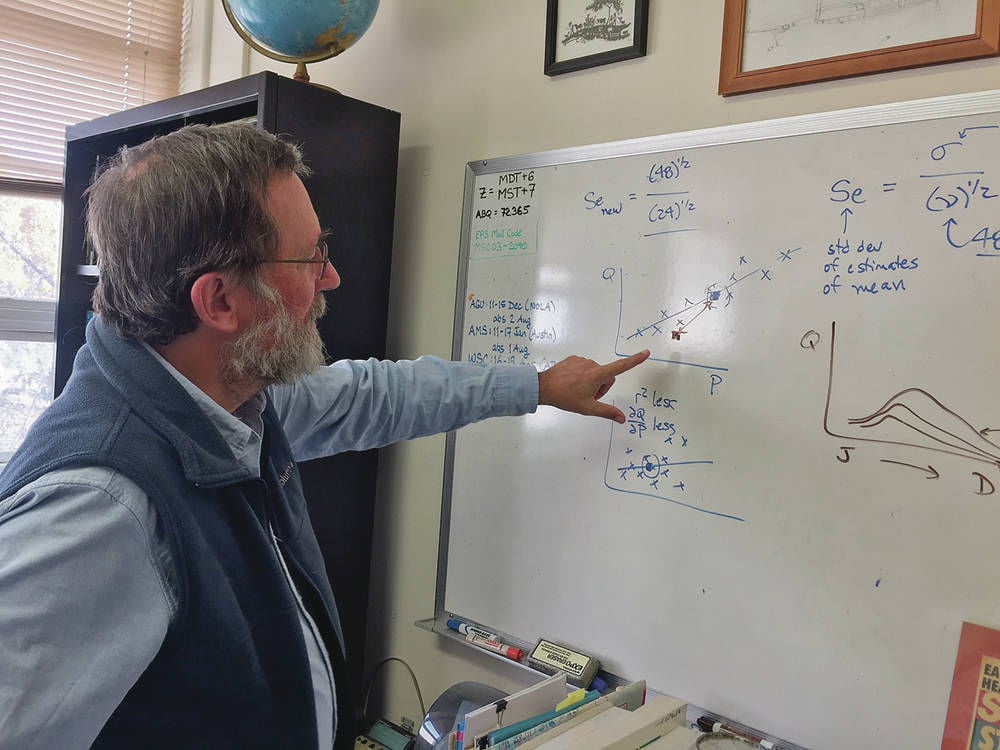 Climate scientist and meteorologist David Gutzler explains a point at his office at The University of New Mexico. Rebecca Moss/The New Mexican 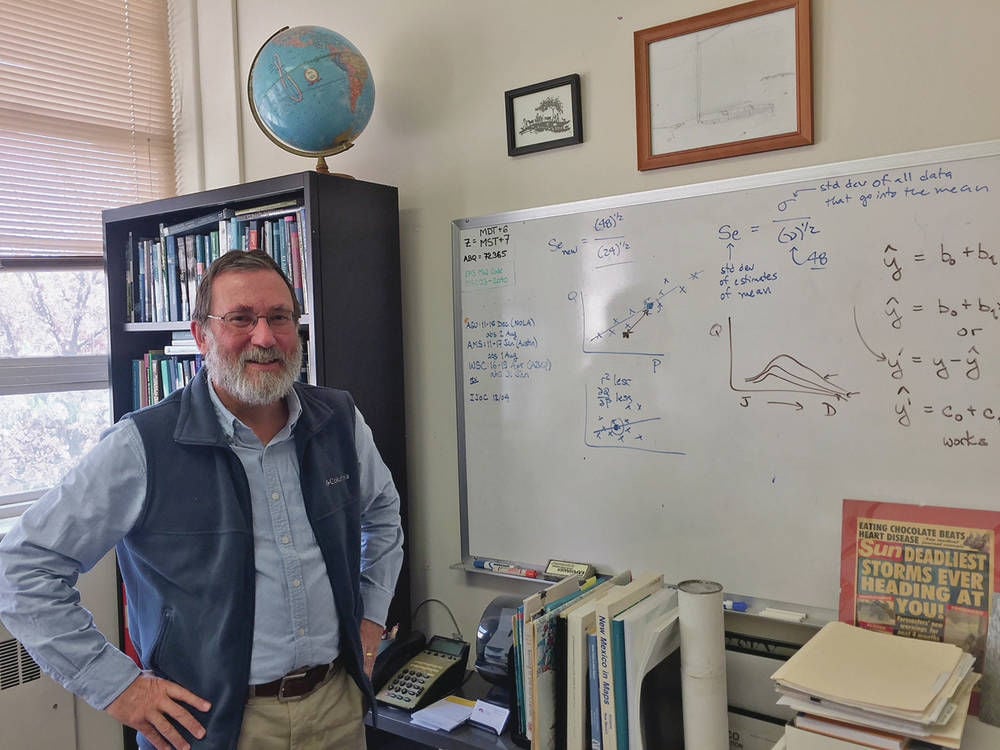 Climate scientist and meteorologist David Gutzler has been teaching at The University of New Mexico for the past two decades. Rebecca Moss/The New Mexican

Climate scientist and meteorologist David Gutzler explains a point at his office at The University of New Mexico. Rebecca Moss/The New Mexican

Climate scientist and meteorologist David Gutzler has been teaching at The University of New Mexico for the past two decades. Rebecca Moss/The New Mexican

ALBUQUERQUE — When the trees are bare, climate scientist and meteorologist David Gutzler has an unobscured view of the Sandia Mountains from his office window. On the second floor of The University of New Mexico’s Northrop Hall, the four seasons transform just beyond the glass. From this vantage point, since the mid-’90s, Gutzler has watched the effects of a warming climate on the state’s landscape.

“We are on the front lines — like it or not — of climate change,” he said on a recent morning. “The temperature is warming very rapidly across the Southwest. In this climate, we see the manifestation more clearly than anywhere else in the world.”

Gutzler, 62, has spent the last two decades teaching climatology and meteorology at UNM but said he never expected that his field of study, which has focused on monsoonal patterns, drought and the impacts of climate change on state water resources, would be the subject of so much controversy.

The evidence: a plastic-covered copy of the British tabloid newspaper The Sun dating back to September 1999, that sits in Gutzler’s office. The cover reads, “Deadliest Storms Ever Heading At You!” in large font alongside grainy photographs of violent lightning and a mother and child clutching one another as a tornado approaches.

The storm story outranked “Bad Girls of the Bible,” Gutzler said, picking up the paper from its place next to photographs of his adult children and wife, a geologist, who occupied the office next door until she retired.

When he saw the magazine on a newsstand, he said, it seemed like a rare moment when the weather outranked more salacious news.

But that has changed. Extreme hurricanes, fires and earthquakes dominated headlines in 2017. And almost daily, the validity of policy enacted by the Obama administration to prevent global warming through international commitments and domestic policy are disputed and unwound by the Trump administration. It’s a debate that resonates deeply in New Mexico, where environmental concern and an oil-driven economy are often at odds.

“If people demand iron-clad proof that humans are changing the climate, then we can’t react,”Gutzler said. “But from my perspective, there has been such a mountain of evidence — to toss all that out because there are uncertainties would be choosing stupidity.”

Gutzler’s profession is based on an ever-evolving science of prediction and how finite environmental conditions — the precise interaction between the amount of atmospheric moisture and the velocity of the wind — correlate to the weather tomorrow, next winter and, ultimately, decades from today.

Uncertainty is what first drew Gutzler to the field. As an undergraduate student at the University of California, Berkeley, he intended to study physics but, on a whim, signed up for a meteorology lecture. The professor introduced him to the principles of chaos theory, based on meteorologist Edward Lorenz’s research on what is now known as the butterfly effect.

“I was hooked,” Gutzler said.

He would go on to earn his doctoral degree at the Massachusetts Institute of Technology, where Lorenz taught and had first discovered his theory.

Then, during the winter of 1983, a massive El Niño storm pattern hit the country, and it was the first time meteorologists were able to synthesize the data in real time.

I “stumbled into the climate prediction problems when it was being turned into a science,” he said, “rather than an art.”

Soon after, Gutzler said, a kind of wall came down between weather researchers. Previously, there had been a divide between scientists interested in short-term climate variability and those studying long-term global warming.

But by the early ’90s, “scientifically, it became harder to ignore the fact that the overall climate system was changing,” he said. “The boundaries between those scientific communities came down.”

“Global warming affects the way we think about next winter’s forecast now,” Gutzler said. “All these phenomena start to blend into longer term climate change.”

After earning his doctorate, Gutzler went on to join the National Oceanic and Atmospheric Administration in Boulder, Colo.

There was an effort at NOAA to explain science to policymakers based on the “assumption that politicians would care,” he said, by way of explaining that the Trump administration is far from the first to question climate change.

During the administration of George H.W. Bush, research related to global warming was questioned and was not implemented into policy, but these questions led to an influx of federal funds to enable researchers to better understand the field.

When Gutzler followed his wife, geologist Jane Selverstone, to New Mexico in 1995, climate research was a relatively unexamined field.

“There was essentially nobody thinking about these issues at UNM,” he said. “I was given a clean slate. I had the academic freedom to pursue whatever I wanted to pursue.”

That has not changed.

He shares a five-year, $5 million grant from the U.S. Department of Agriculture with researchers from New Mexico State University and the University of Texas at El Paso, which together are developing an integrated water model for the region based on climate change.

On a whiteboard in his office, scatter grids plot the amount of snowpack, as it is influenced by increasing evaporation, correlated to warmer temperatures and river flow. It’s a sphere of knowledge that has wide implication for state water usage and agriculture.

“Whatever dreams I had about discovering the silver bullet have not panned out,” Gutzler said. “But we’ve learned a lot along the way.”

The chaos of evolving weather systems still captivate him, and one or two new graduate students ponder the theories with him each year. His classes routinely fill up.

“What we see in the data, the temperature is rising with a rate consistent with a middle-road climate change based on greenhouse gases,” Gutzler said. “If we extrapolate out … the analogy I draw is the climate in the Albuquerque area would be roughly similar to El Paso.”