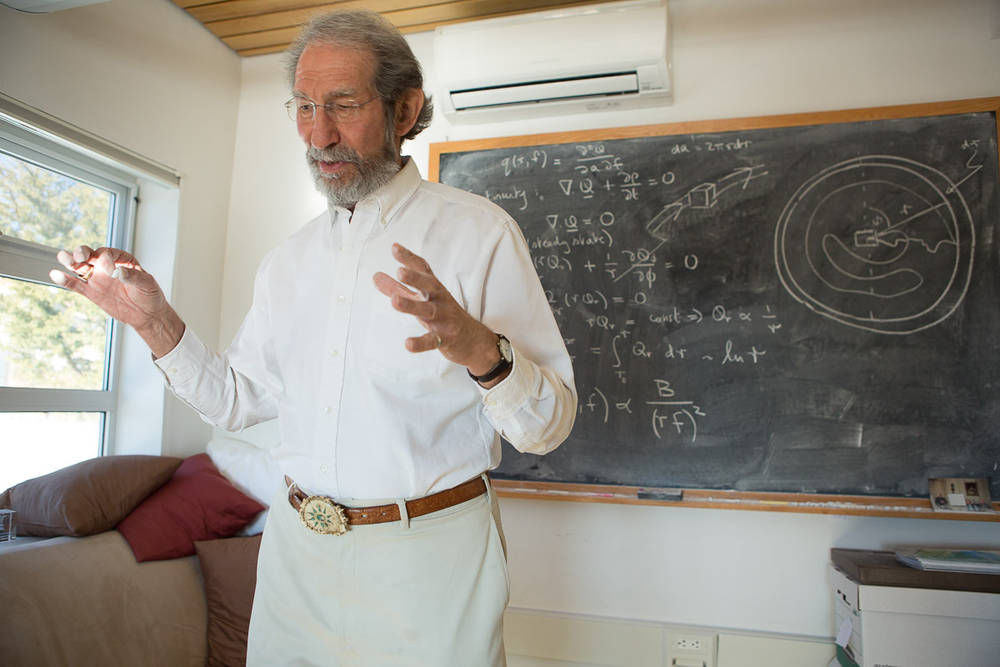 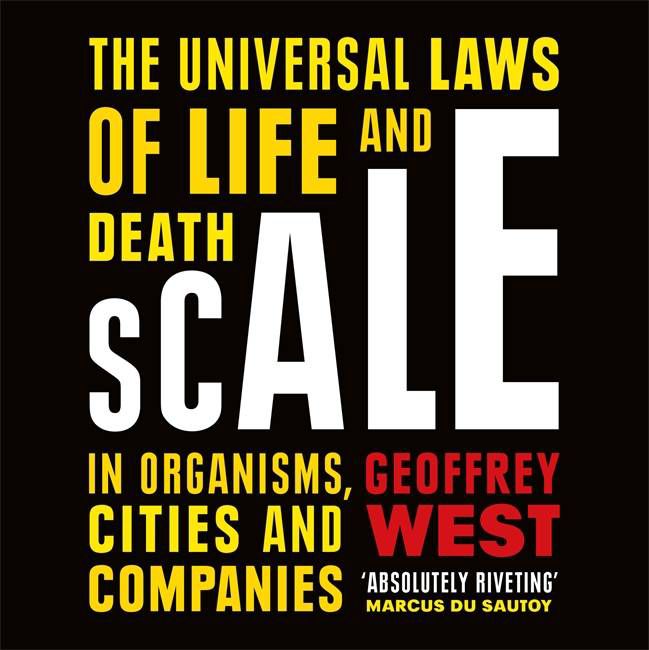 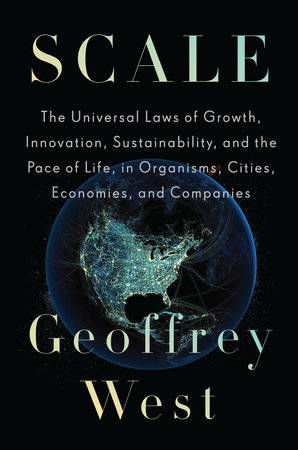 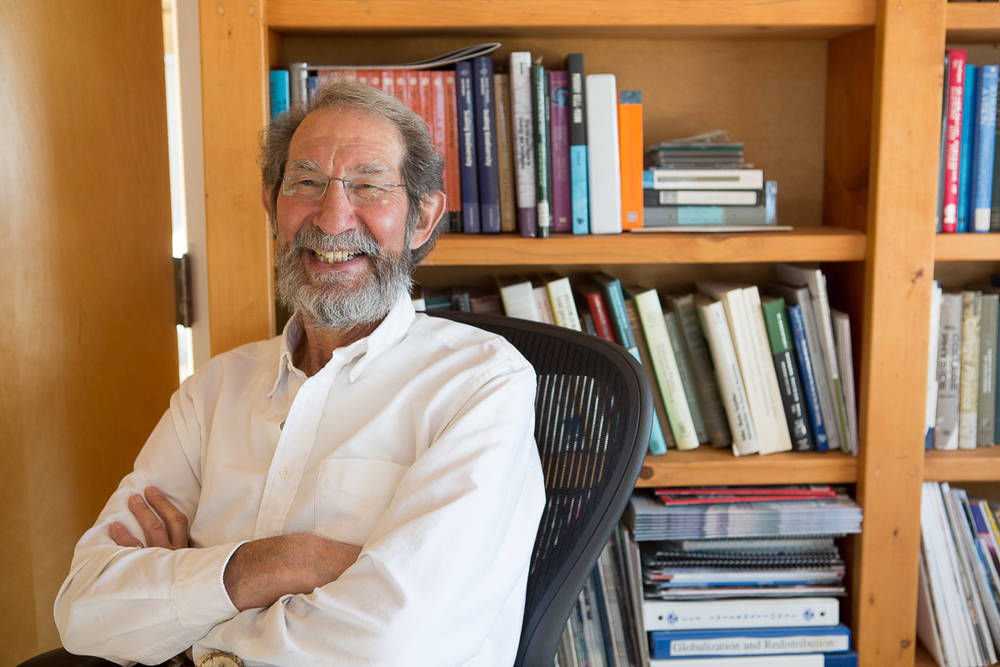 From his office, theoretical physicist Geoffrey West can look out on the piñon pine and juniper that surround the Santa Fe Institute, then down onto the squat, sand-colored cityscape below.

On a recent afternoon, he gestured out toward a nearby tree bouncing in a light wind and remarked on the natural laws of scaling that link the evolution and growth of the tree’s trunk to his own aorta.

“Even though these networks may physically be different, their generic properties, in terms of mathematics, are the same, whether for a circulatory system with a beating heart, or a tree, which has no beating heart and is driven by hydrostatic pressure between the atmosphere and roots,” West said.

The theories of scaling — the subject of West’s study, research and writing for decades — hold that as complex systems like a tree or a human circulatory system “scale up” or grow, they become, in a sense, more energy efficient.

A tree or animal that doubles in size doesn’t need twice the energy to sustain itself; a nonlinear scaling law holds that it needs only 75 percent more energy, West said, reaping “a savings” of 25 percent.

On top of that, he added, everything you can measure about an organism has a similar kind of regular scaling law — heart rate, life span, on and on.

And while the idea of scale might seem both familiar and alien, it could help us navigate an increasingly complex future marked by incredible human population growth and the rise of unimaginably dense supercities.

“I wanted to show that, in fact, the underlying principle is, on some deeper level, the same,” West said.

How those scaling laws underlie so many aspects of life is the subject of Scale, West’s thick new book.

Scale constitutes the product of decades of curiosity and research — a “legacy book,” West, 76, says, a soft scoffing laugh diluting whatever ego he reads into such a phrase. A former president of the Santa Fe Institute, and a former Los Alamos National Laboratory physicist and Stanford University professor, West has contributed to other works but never produced a “popular” one of his own, he said.

Scale has been greeted with largely positive reviews in The New York Times, The Economist, the journal Nature and more. An international speaking tour has drawn “embarrassingly nice” feedback to date, West, a Santa Fe resident of some 40 years, said with a laugh.

And Scale is also, Knee writes, “a satisfying personal and professional memoir of a distinguished scientist whose life’s work came to be preoccupied with finding ways to break down traditional boundaries between disciplines to solve the long-term global challenges of sustainability.”

A native of Somerset, in southwestern England, West sought to excise formulas from the book and restrain its pedagogy to the extent that an “intelligent layperson” could follow. He said he thought of his mother, who “wasn’t terribly well-educated,” as his target reader.

The ideas in Scale, for West, were rooted in a few innocuous questions, along these lines: Why do we live only as long as we do? Why not 200 years? Why do trees grow only as tall as they do? Why does the human body require eight hours of sleep a night — why not 10 hours; why not 14?

And beyond promoting a new way of thinking about the hidden order in the complex systems that surround us, West, in Scale, hopes to introduce how this theory of scaling could help human beings explore and identify solutions to the threats of unchecked urban growth.

Cities stand at the heart of West’s study, and the relentless momentum of an increasingly urbanized globe represent the primary challenge his book builds toward.

Most humans will live in urban settings by the latter half of this century in “megacities of unprecedented size,” West writes. He said he has only scratched the surface of an essential “science of cities” that can provide a quantitative framework from which to address the inevitable energy and resource challenges that will result.

“We need a kind of grand unified theory of sustainability,” he added. “We need something that’s so much bigger than the Apollo Program or the Manhattan Project.”

Humans have long innovated to keep ahead; West likens that to the leap from one treadmill to a faster-accelerating treadmill, leaps that must concurrently be made more and more often.

These patterns of scaled physical growth are everywhere, and the implications could be extremely useful, because, while organisms inevitably die per sublinear scaling laws, cities or physical manifestations of human interaction, live on inexorably, governed instead by superlinear scaling laws.

There looms the threat of socioeconomic collapse. Can it be mitigated?

The central question posed in Scale — can human beings continue to innovate fast enough to sustain what will be an immensely urbanized globe? — does not yet have an answer.

“The amazing thing is that you can make these paradigm shifts, these resettings of the clock — discovering coal, inventing computers. … But the theory says, and data supports, as you’re growing you have to accelerate.”

West, looking out at the surprise mid-May snowstorm, said he holds a generally pessimistic view. “Unfortunately.”

In Scale, he writes of incipient food and energy crises, worsening effects of climate change. Human beings should have been having these conversations 70 years ago, he said.

The next treadmill leap might come in the next 20 years, he hypothesized. Could it be driverless cars, artificial intelligence, machine learning?

“Who in the hell knows?” West smiled. “That part, to me, is unpredictable.”