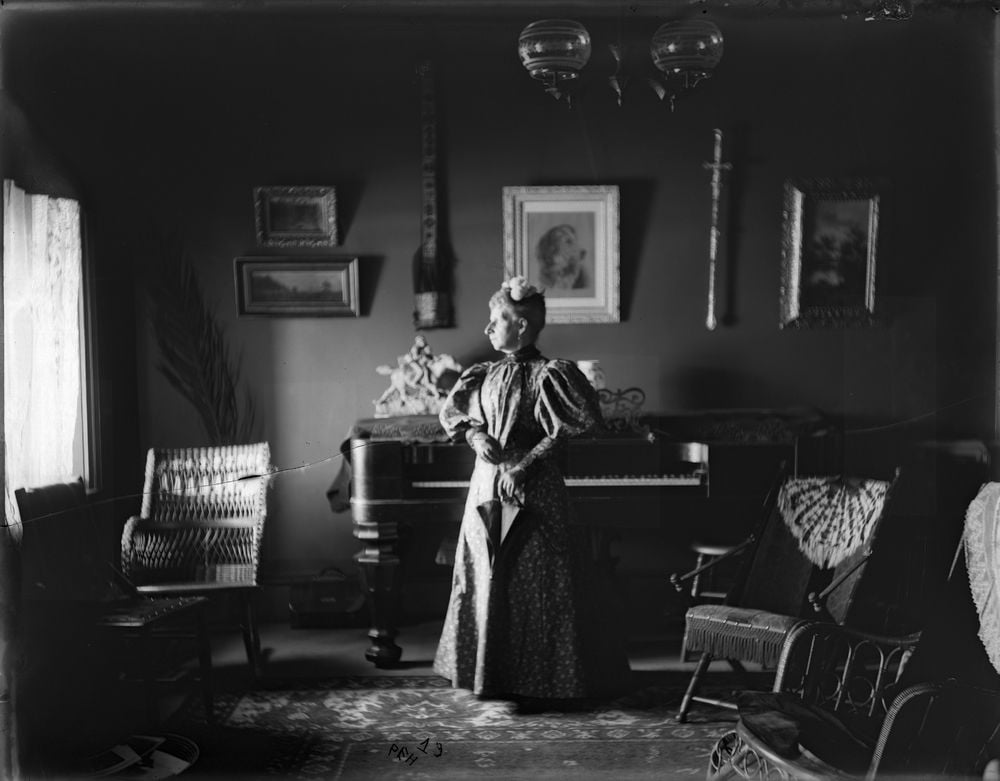 Founder of the Fifteen Club, Mary Houghton Harroun, wife of Dr. William Harroun, in 1892 at her home in Santa Fe. Courtesy Palace of the Governors photo archive Neg. No. 045211 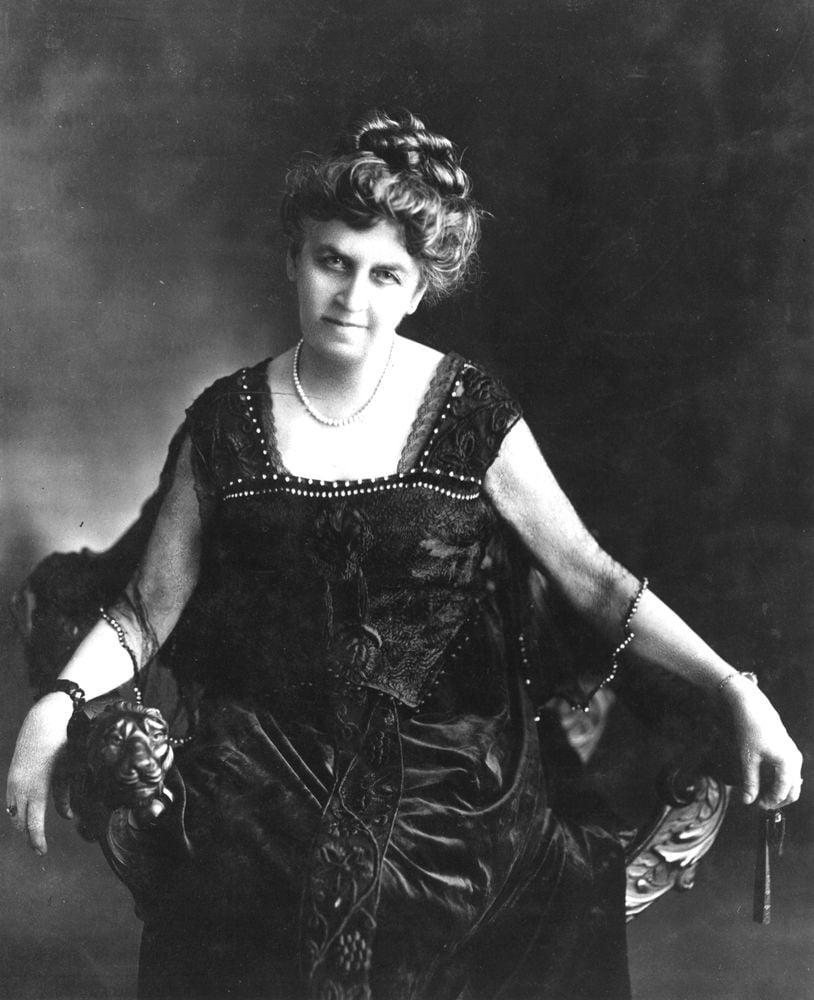 A portrait of Mary Prince, a founding member of the Fifteen Club and the wife of L. Bradford Prince, former governor of the New Mexico Territory, which earned her the nickname ‘Governor Mary.’ Courtesy Palace of the Governors photo archive Neg. No. 010352 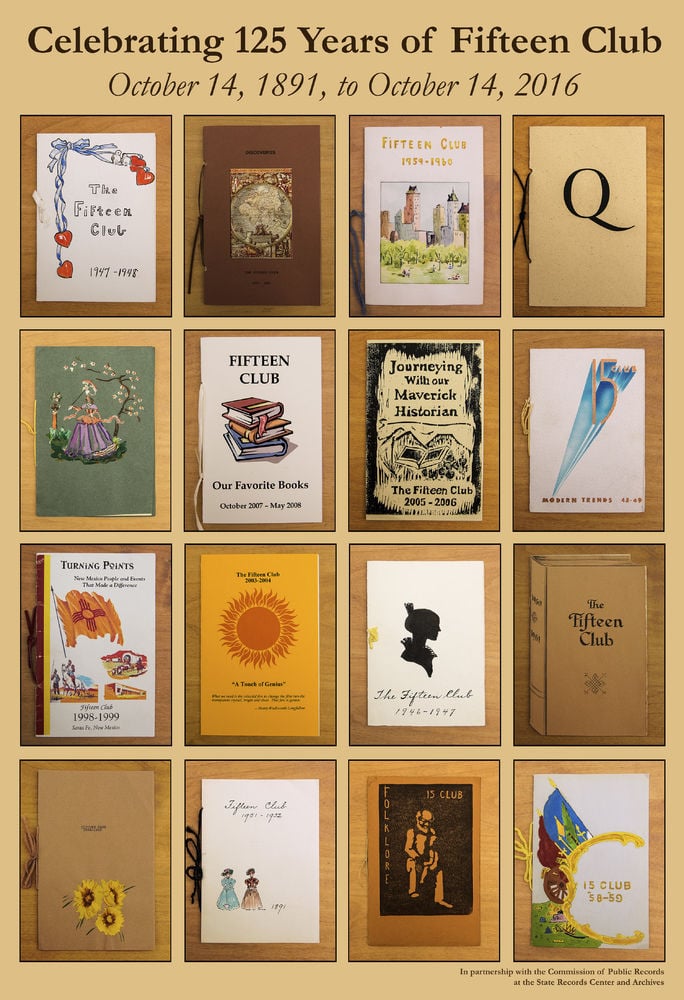 Programs of the Fifteen Club over the years. Courtesy photo

Founder of the Fifteen Club, Mary Houghton Harroun, wife of Dr. William Harroun, in 1892 at her home in Santa Fe. Courtesy Palace of the Governors photo archive Neg. No. 045211

A portrait of Mary Prince, a founding member of the Fifteen Club and the wife of L. Bradford Prince, former governor of the New Mexico Territory, which earned her the nickname ‘Governor Mary.’ Courtesy Palace of the Governors photo archive Neg. No. 010352

Programs of the Fifteen Club over the years. Courtesy photo

On Oct. 14, 1891, Mary Houghton Harroun, a physician’s lonely wife, invited a group of women to her home on Santa Fe’s Palace Avenue for the first Fifteen Club meeting.

It was one of many all-female clubs forming across the United States at a time when women couldn’t vote and rarely were encouraged to attend college, run for public office or work outside of the home.

The Fifteen Club wasn’t a book club, church gathering, labor organization or quilting circle. It was a literary endeavor. Each woman explored topics from science to Shakespeare and presented reports at the meetings.

Not overtly political, the club in its own quiet way and other similar organizations were part of a revolution in women’s rights, said member and historian Pat Farr.

The Fifteen Club has met regularly in Santa Fe since that first gathering. This Friday, the club will be honored on its 125th anniversary by proclamations from Gov. Susana Martinez and Santa Fe Mayor Javier Gonzales at an event from 2 to 4 p.m. at the State Records Center and Archives, 1209 Camino Carlos Rey.

Women’s clubs in the late 19th century created a place where smart, capable women could stretch their minds despite their social constraints. A woman’s club was “not the mere banding together for a social and economic purpose, like the clubs of men,” wrote Jennie Cunningham Coly in an 1898 analysis of the movement for the General Federation of Women’s Clubs. “It became at once, without deliberate intention or concerted action, a light-giving, seed-sowing centre of purely altruistic and democratic activity.”

In Santa Fe, the Fifteen Club founders were the wives of officers from Fort Marcy and other prominent citizens. One was Mary Prince, wife of L. Bradford Prince, then governor of the New Mexico Territory. She was nicknamed Governor Mary. “There is little doubt that Mary Prince was one of the most dynamic women in Fifteen Club,” wrote Marian Meyer in her 1991 book about the club. “She was not the most beloved, but it appears she was highly respected.”

Some husbands were alarmed. George Hill Howard refused to let his wife accept the invitation to join because he considered the club “too masculine.”

“Women’s clubs of any sort represented being other than out of sight,” Farr said. “But they were not necessarily suffragists. They were bright women who just wanted to expand their knowledge. Many learned to speak in front of others by doing the literary reports. They learned about Robert’s Rules of Order and the basics of running a meeting. It might have emboldened them to encourage their daughters to go to college.”

Club members didn’t stop with their literary curiosity. Thirteen of them founded the civic-focused Santa Fe Woman’s Board of Trade and Library Association to raise money for Santa Fe’s first public library. The board became the Santa Fe Woman’s Club.

The Fifteen Club continued to meet through the Depression, two World Wars, the Vietnam War and the civil unrest of the 1960s.

The Fifteen Club’s membership reflects changing times. Women in the early years of the club didn’t work outside of the home. A century later, most of the club’s members join after retiring from careers. Among the current members are an anthropologist, a civil rights judge, a librarian, a couple of homemakers, an archivist, historians and a teacher.

“It is a diverse group,” said Fifteen Club member Janet Stoker, who retired as a fundraiser for United World College and the School for Advanced Research in Santa Fe.

In the early days, all the members were Anglo and newcomers to Santa Fe. Now there are three Hispanic women in the club and several members are native to Santa Fe.

The members span the political spectrum and they don’t talk politics. “In this era in particular, that’s not a bad thing,” said Stoker.

Farr joined the club 13 years ago. “I like being part of a club with this historically long line of women. It is not a group who would usually be together socially,” Farr said. “I wouldn’t have known two-thirds of the women without Fifteen Club.”

The women who started the Fifteen Club “were just ordinary women,” Farr said. “The women today also are ordinary. We’re not trying to set the world on fire.”

Club membership is by invitation only. The club meets the second and fourth Friday of each month at a different member’s home except during the summer.

There’s no club president. Responsibilities and hosting are rotated through the membership alphabetically based on last name. The club picks a theme each year, such as science or culture, and members choose a related topic to research and present a report on.

No food or drinks are provided at meetings, but at the end the women pass around a tray of chocolates.

The club donated its archived records to the state in 1988, and some of those documents will be on display Friday. The event will include a Chautauqua performance by the Santa Fe Woman’s Club, re-enacting Oct. 14, 1891, when the wife of a busy territorial physician decided to gather her friends and launch a new intellectual outlet.

For more information on the Fifteen Club event or to reserve space, call 505-476-7926. Seating is limited.