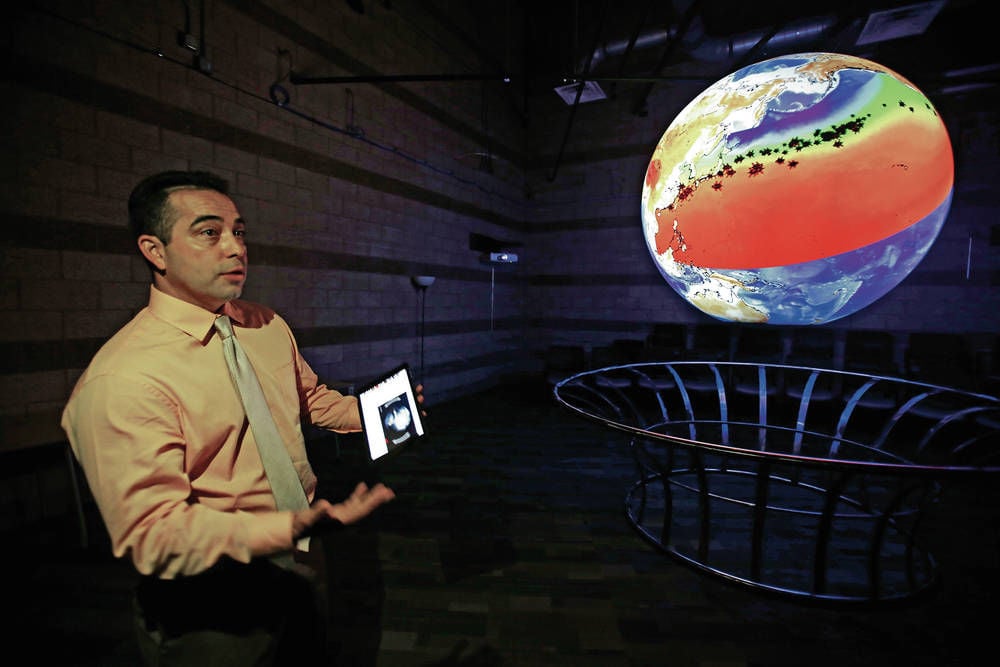 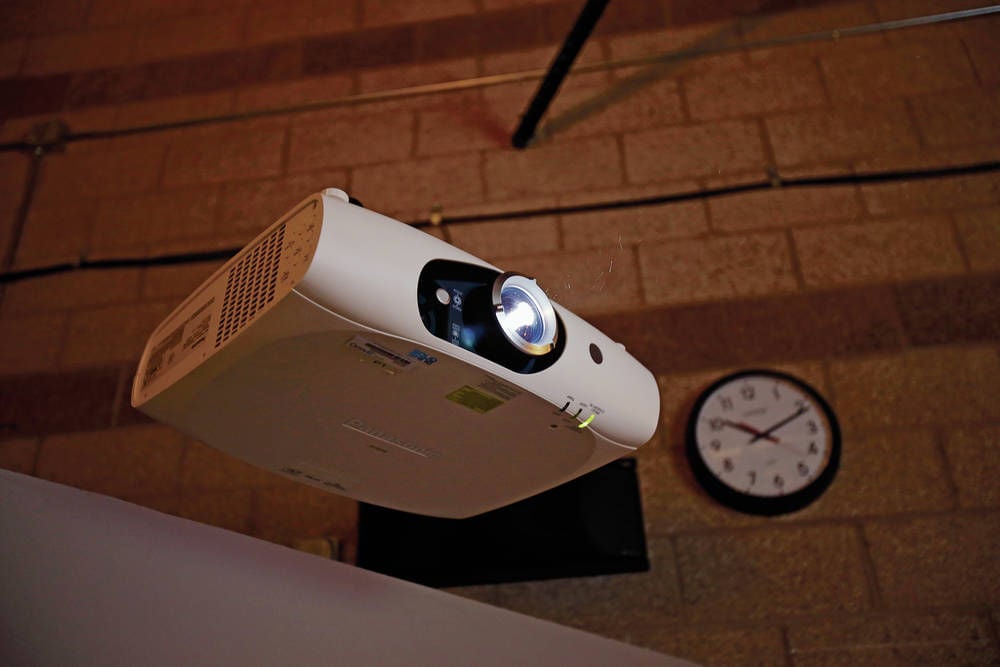 The Science On a Sphere system at Santa Fe Community College uses four projectors to display planetary data and other visuals onto a 6-foot-diameter sphere. Luis Sánchez Saturno/The New Mexican 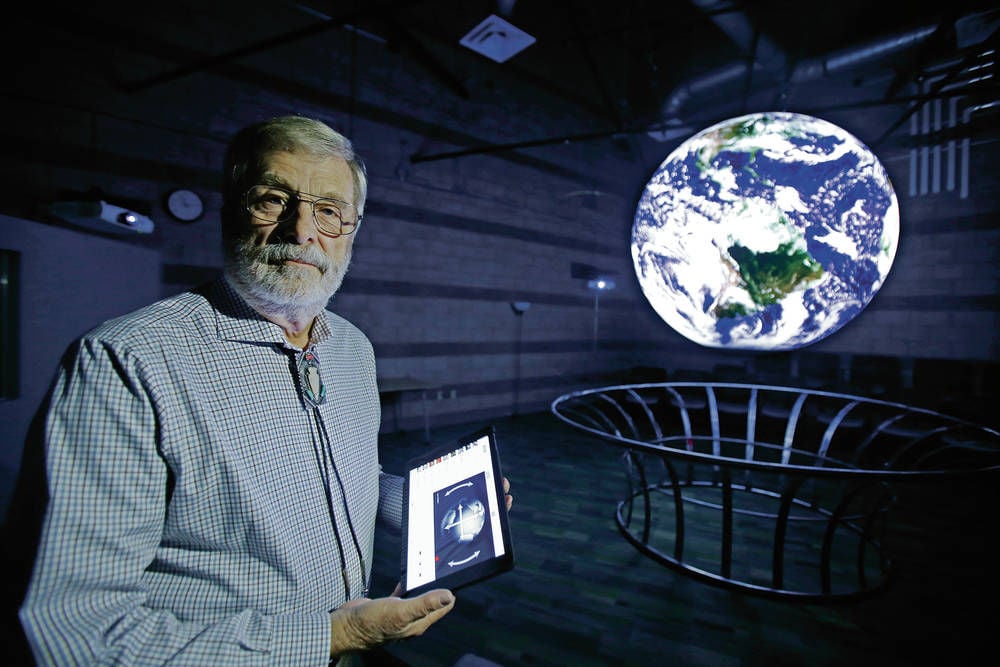 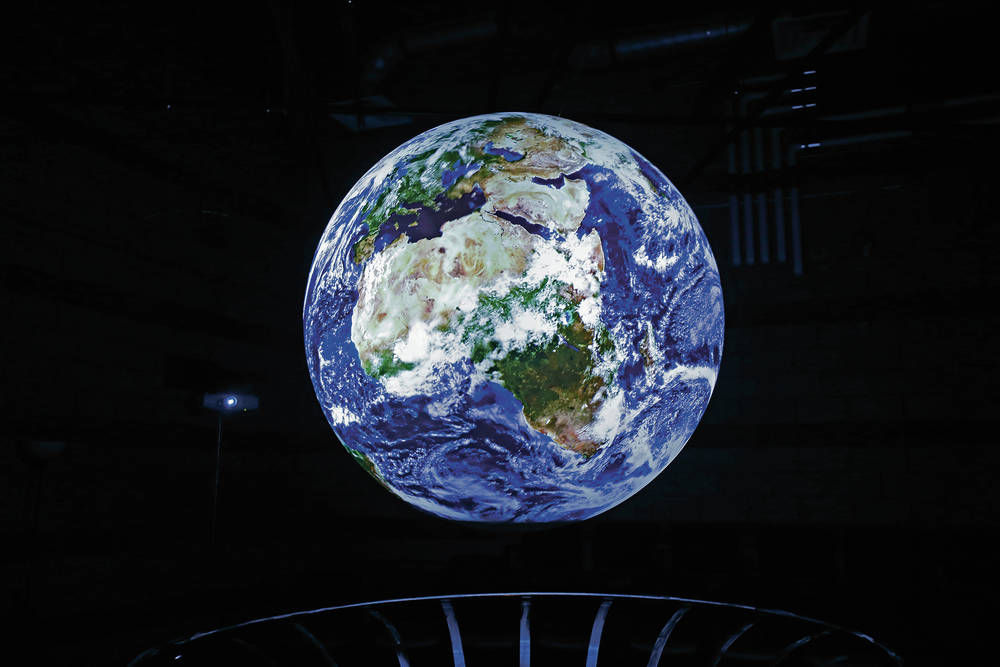 A 3-D model of the planet is displayed Thursday via the new Science On a Sphere system at Santa Fe Community College. The school is about to publicly unveil the installation, the 144th in the world and the only one in New Mexico. Luis Sánchez Saturno/The New Mexican 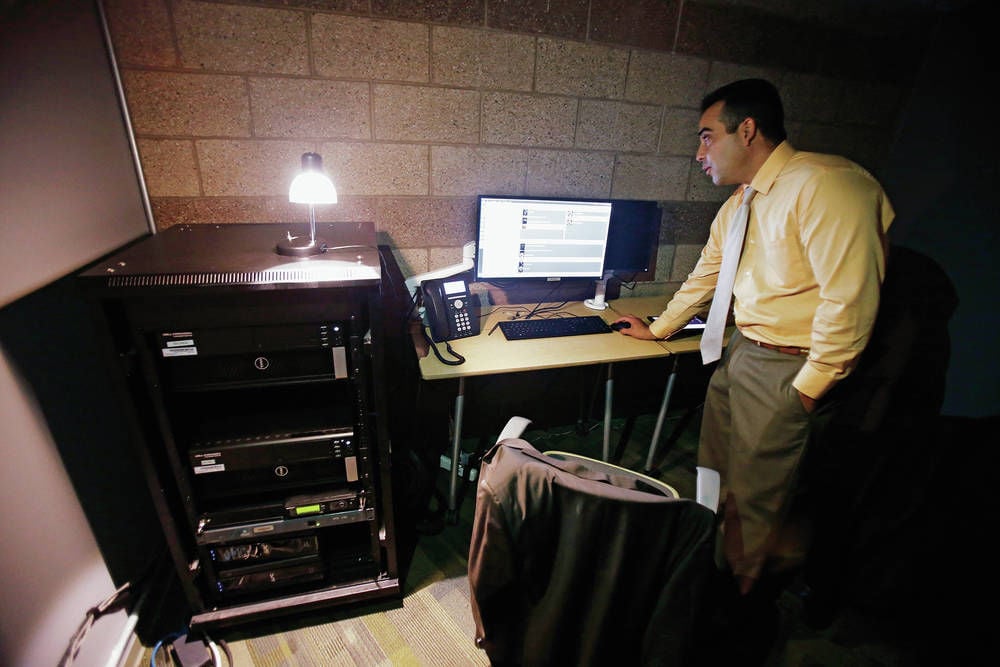 The Science On a Sphere system at Santa Fe Community College uses four projectors to display planetary data and other visuals onto a 6-foot-diameter sphere. Luis Sánchez Saturno/The New Mexican

A 3-D model of the planet is displayed Thursday via the new Science On a Sphere system at Santa Fe Community College. The school is about to publicly unveil the installation, the 144th in the world and the only one in New Mexico. Luis Sánchez Saturno/The New Mexican

In a small, cinder-block room tucked in a corner of the Trades and Advanced Technology Center at Santa Fe Community College, the whole world spins.

Hurricanes whip up over Earth’s oceans and race toward landfall. Sea turtles swim from Mexico to Japan, adjusting their courses to follow shifting ocean temperatures. And beyond Earth’s atmosphere, the Great Red Spot swirls on Jupiter.

In the center of this room, science lessons happen on the surface of a 6-foot sphere suspended from the ceiling.

The Science On a Sphere installation is a three-dimensional projection system designed by the National Oceanic and Atmospheric Administration to illustrate science on a planetary scale. The community college’s sphere is the 144th in the world and the only one in New Mexico.

The school plans to use the device to teach both college and K-12 students, to build partnerships with area laboratories and businesses, and to afford students and teachers the opportunity to make 360-degree digital presentations.

Video: Science on a Sphere

“It’s an amazing tool to visualize the things that are important here,” said Dr. Lenny Gannes, who chairs the community college’s science department. He sees the technology as a new medium for telling stories, using images and data to illustrate everything from climate change to the spread of disease to how Facebook friendships make connections around the globe.

The Rev. Dr. Dave Wasserman, a local resident who had become familiar with the projection technology while volunteering with an organization in Texas, gathered a group of scientists and teachers here to advocate for an installation. Two and a half years later, Santa Fe Community College is about to publicly unveil the project.

The system is made up of a 60-pound, suspended carbon-fiber globe; four projectors that make images and videos dance seamlessly across the spherical screen; and hundreds of data sets, images, illustrations and videos and computers that run the system and let users manipulate the projections.

The project cost about $200,000 to install and was funded by the school, the SFCC Foundation and the state government, according to Dr. Ed Barker, a planetary astronomer and NASA contractor who chairs the Science On a Sphere advisory committee.

Right now, the system mostly operates behind closed doors. Over the next few months, however, SFCC administrators plan to roll out education sessions with college students and K-12 students, particularly in Santa Fe Public Schools.

“This tool is a way to engage the community to come study these programs,” said Jeremy Lovato, the college’s chief information officer. “There’s a lot of planning still ahead, but we’re happy that we’re finally releasing this to the public.”

The school hopes local people will begin to develop their own data sets to display on the sphere. Already, one teacher is planning ways to map land use on New Mexico pueblos, and there have been discussions about mapping the spread of disease in the state. Students in the community college’s media arts programs also could create projects — stills or videos — that would project around the globe.

Education is the primary focus of the globe — but within that scope, possibilities for projection are almost endless.

“It really allows your imagination to run wild,” Barker said.

And so far, he said, the sphere’s unveil has captured attention at all age ranges.

“We don’t only have to protect it from the kids,” Barker said, gesturing to an artistic metal railing that keeps visitors a bit away from the globe itself. “Most of the adults want to reach up and touch it, too.”