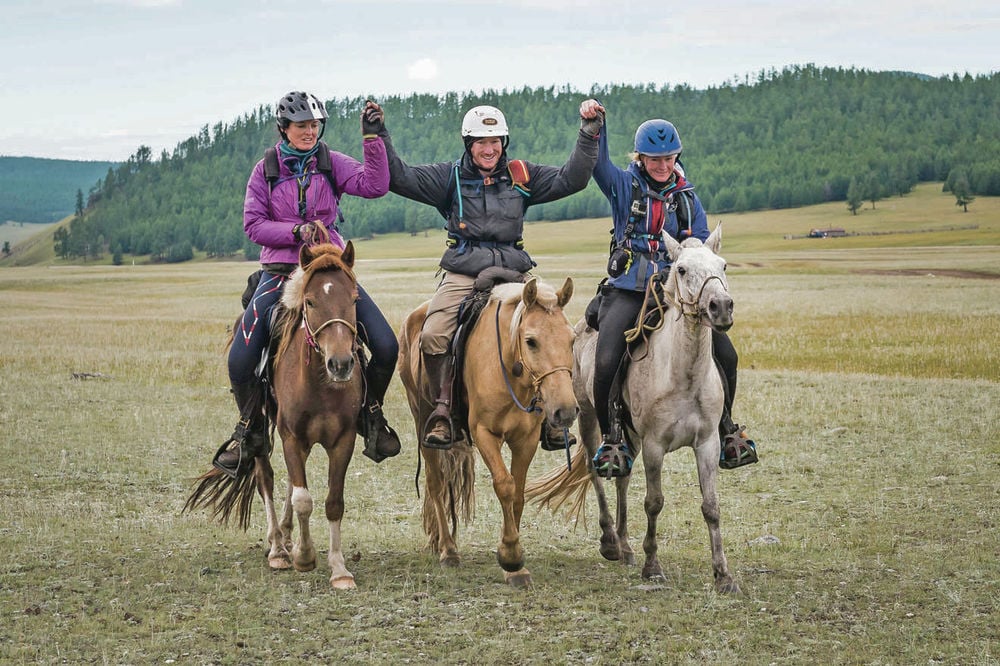 From left, Marcia Hefker-Miles, who grew up on a Carrizozo ranch and works as a nurse practitioner in Raton, links hands with Australian rancher Will ‘Dingo’ Comiskey and Canadian lawyer Heidi Telstad as they cross the finish line Wednesday in the Mongol Derby. Courtesy Richard Dunwoody/The Mongol Derby 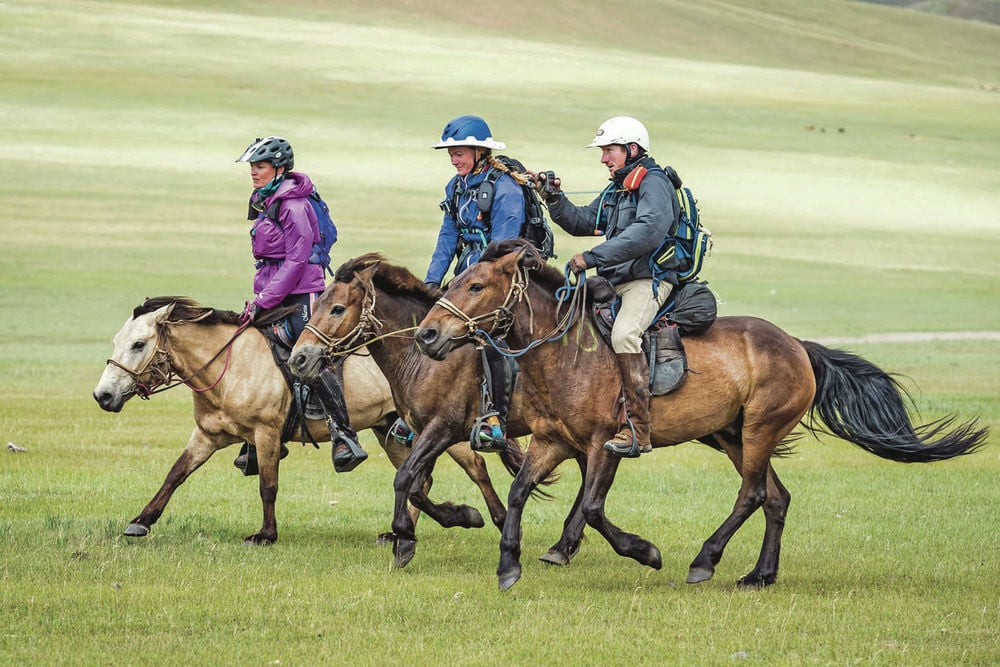 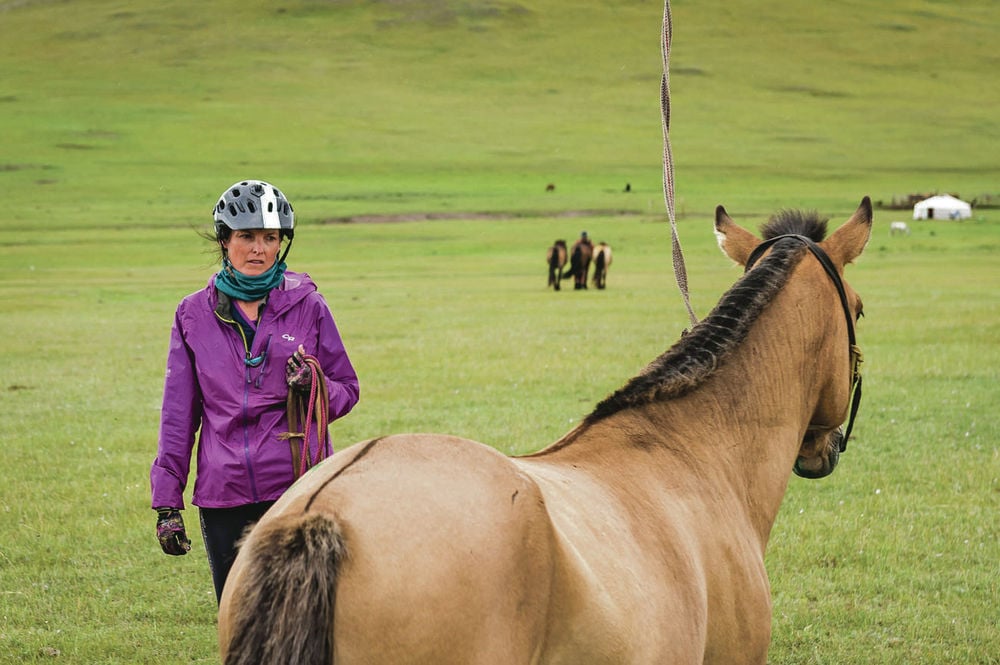 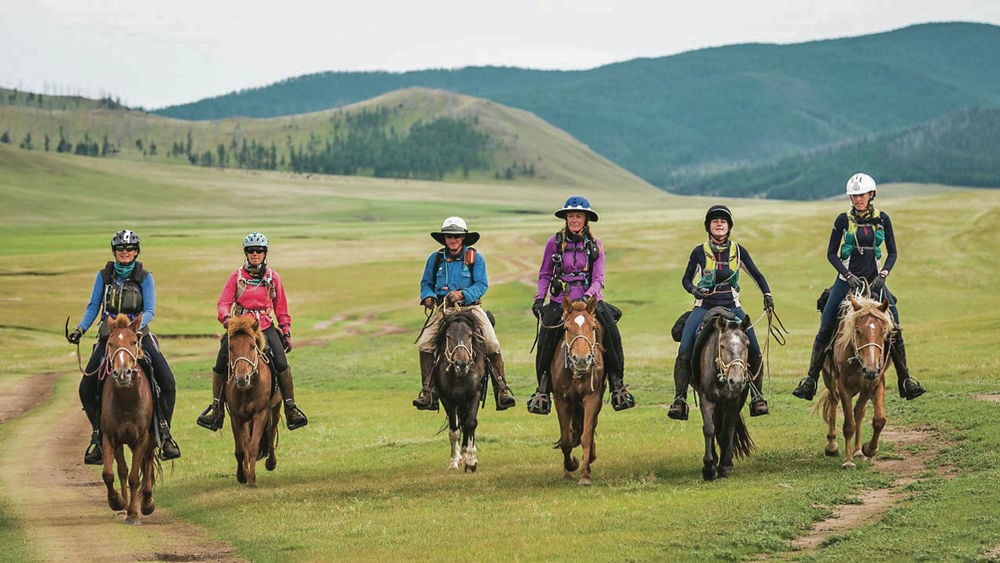 New Mexican Marcia Hefker-Miles, left, rides with others on the fifth day of the Mongol Derby. She finished in a three-way tie for first place. Courtesy Richard Dunwoody/The Mongol Derby

From left, Marcia Hefker-Miles, who grew up on a Carrizozo ranch and works as a nurse practitioner in Raton, links hands with Australian rancher Will ‘Dingo’ Comiskey and Canadian lawyer Heidi Telstad as they cross the finish line Wednesday in the Mongol Derby. Courtesy Richard Dunwoody/The Mongol Derby

New Mexican Marcia Hefker-Miles, left, rides with others on the fifth day of the Mongol Derby. She finished in a three-way tie for first place. Courtesy Richard Dunwoody/The Mongol Derby

New Mexico endurance rider Marcia Hefker-Miles tied with two other competitors for first place in the 621-mile Mongol Derby horse race at 9:31 a.m. Thursday. That was Mongolian time, when many in New Mexico were just finishing Wednesday’s dinner.

The derby, which follows the ancient postal route established by Genghis Khan across the rugged Mongolian steppes, is billed by organizers at The Adventurists as the longest, toughest endurance horse race in the world.

Hefker-Miles, 45, grew up on a ranch in Carrizozo and works now as a nurse practitioner in Raton. She linked hands with Will “Dingo” Comiskey, an Australian rancher, and Canadian lawyer Heidi Telstad as they crossed the finish line together.

The three completed the race in seven days. Two dozen riders were still behind them. It was the first time a three-way, first-place tie occurred in the race, said Liz Ampairee, spokeswoman for the Mongol Derby. “It’s a lovely thing I think that they chose to all win together rather than make a charge for the line,” Ampairee said.

A total of 41 riders from 13 countries started the race Aug. 4. By Wednesday, Ampairee said, 14 had quit because of injury or exhaustion.

“Some of those hospitalized earlier on in the week are currently en route to cheer on their teammates at the finish,” Ampairee said.

Riders had to choose new Mongolian horses each day of the race. During each day’s ride, horses had to pass veterinarian health checks at horse stations known as Urtuus along the route. Riders were penalized with additional time if their horses were not healthy at each station. Riders also were penalized if they had to call in medical help for themselves while out on the trail.

Along the route, riders endured being thrown by their mounts, escaped horses, losing their way, falls and exhaustion.

Weather extremes — from blazing hot temperatures to bitter cold and driving rain — have made this the toughest derby since the event launched in 2009, Ampairee said.

Hefker-Miles, a former rodeo cowgirl turned endurance rider, had stayed near the front of the pack for most of the derby. She was in the lead with a different pair of companions — Kenyan-based Venetia Philips and professional dressage rider Tatiana Mountbatten of the United Kingdom — a day before reaching the finish line. The three were six miles ahead of Telstad and Comiskey.

Then Mountbatten’s new horse suddenly became ill and died less than five miles from the next horse station. The Adventurists issued a statement saying a veterinarian’s check of the horse found it had died of a ruptured diaphragm due to either an old injury or a congenital defect, not because of strenuous exercise. “There was no indication that the horse was in anything other than the peak of health and fitness,” said the statement, noting the horse’s owner was compensated for the loss. “There is no evidence that Tatiana did anything to compromise the welfare of the horse.”

The ride concludes Sunday or when the last horse and rider cross the finish, whichever comes first.