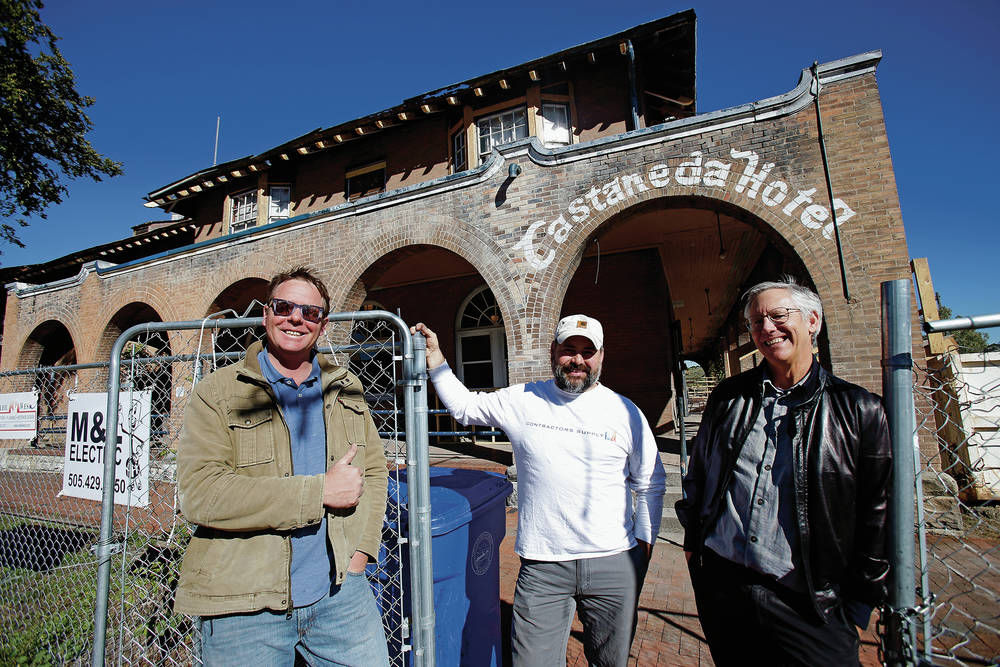 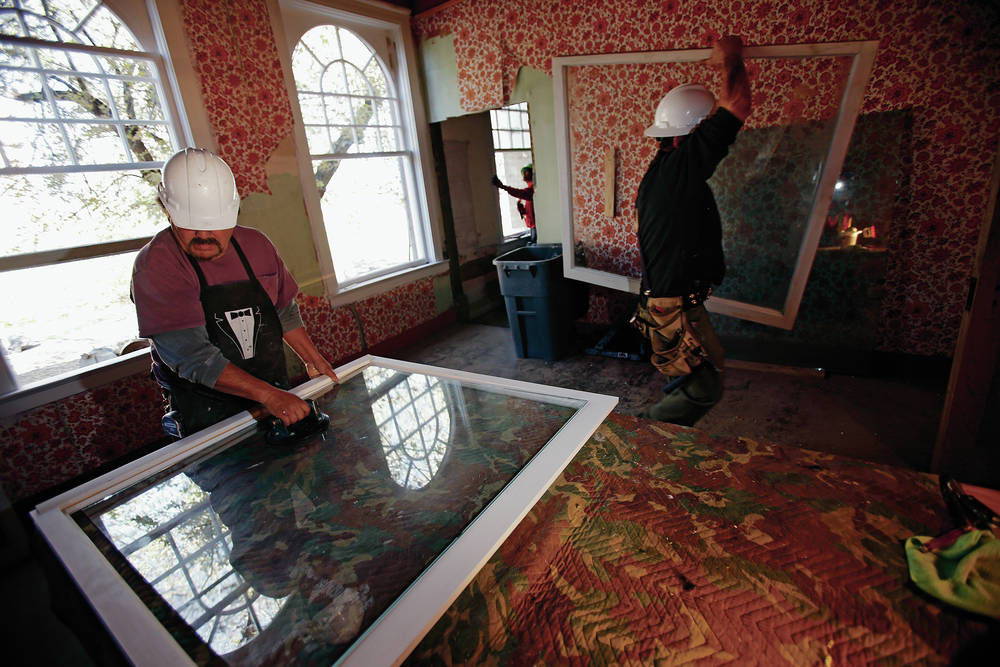 Pat Gonzales, with Grimm LLC, cuts a pane of glass for one of the windows at the historic La Castañeda in Las Vegas, N.M., earlier this month. Most of the demolition portion of the restoration, including replacing 199 windows — all of which were broken — is completed. Luis Sánchez Saturno/The New Mexican 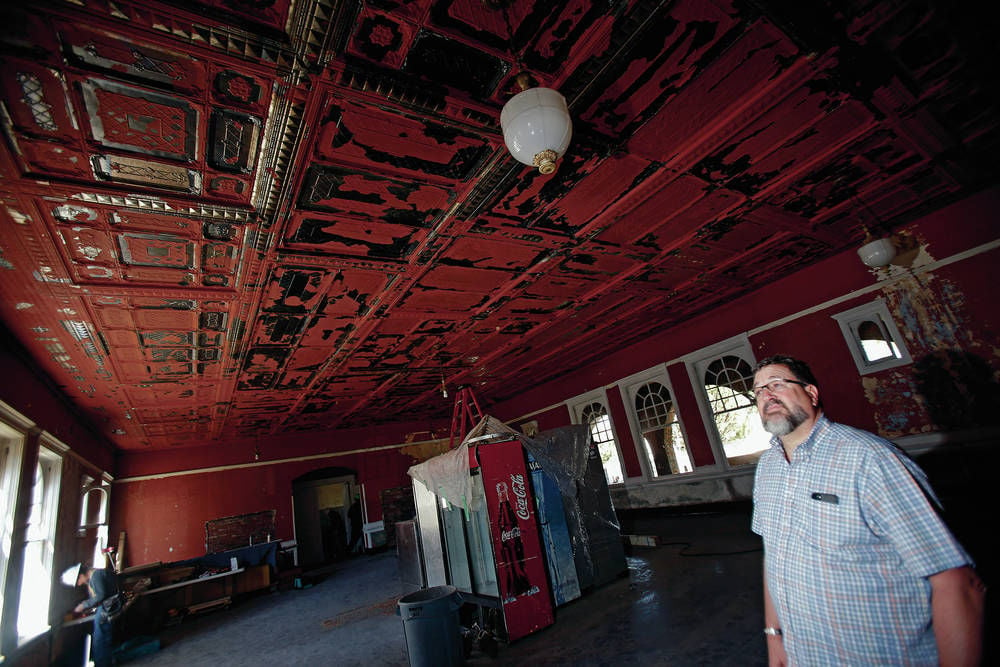 Restaurateur Matt DiGregory takes a look at the tin ceiling in La Castañeda’s ballroom. DiGregory of The Range Cafe fame will run the restaurant and bar for the hotel. Luis Sánchez Saturno/The New Mexican 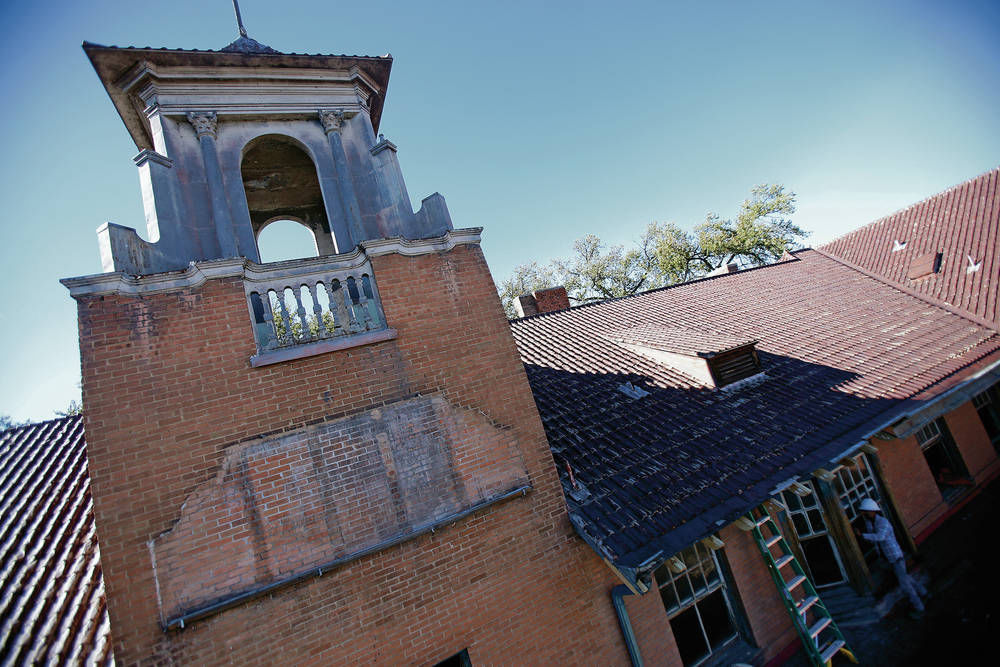 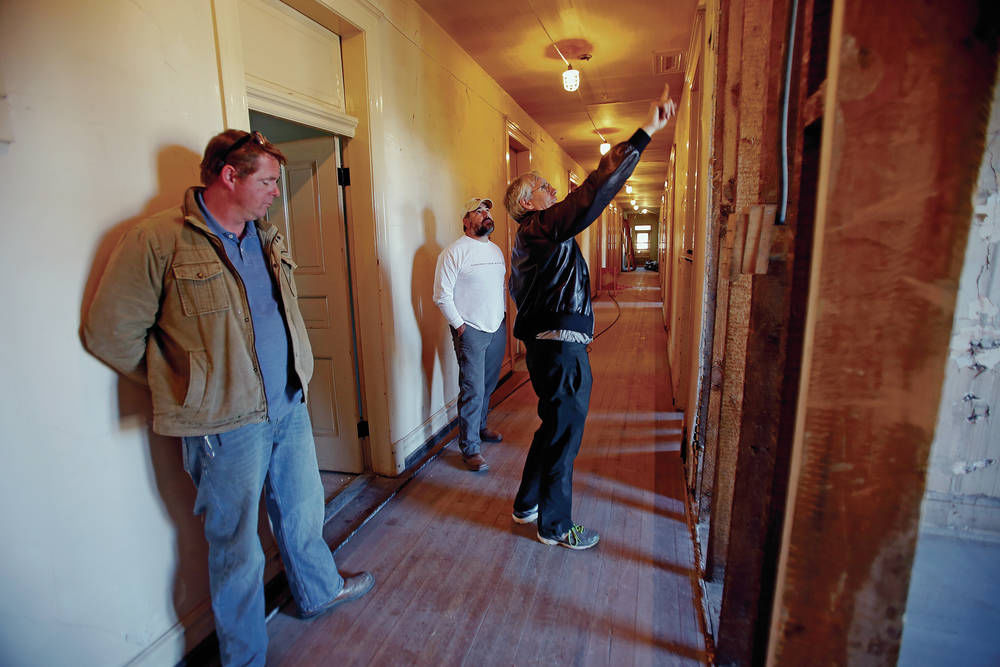 Developer Allan Affeldt, right, gives a tour of the historic La Castañeda in Las Vegas, N.M., with Jordan Grimm, owner of Grimm LLC, left, and project manager Carlos Lopez. Instead of the original 40 guestrooms, the restored Harvey House will feature 20 larger rooms, each with its own bathroom. Luis Sánchez Saturno/The New Mexican 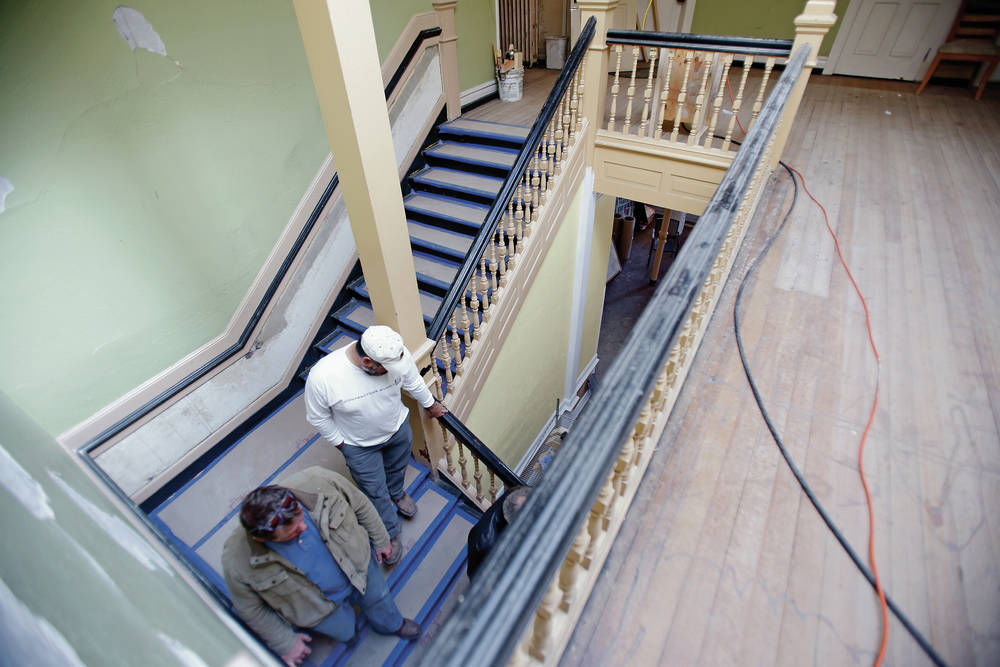 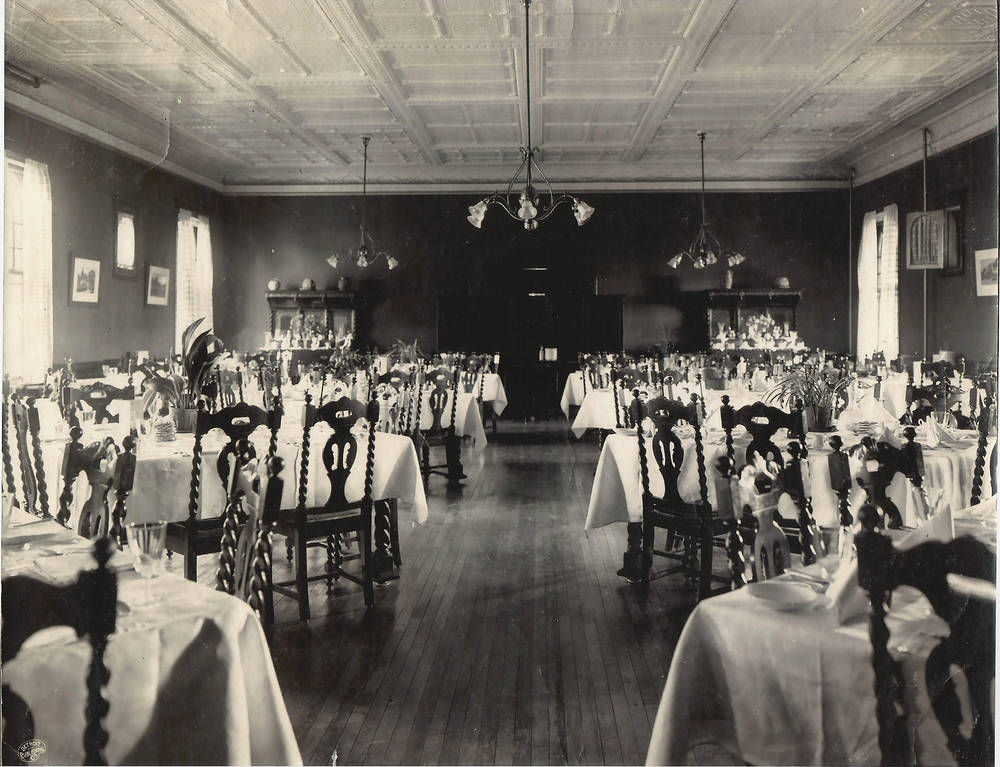 The dining room of La Castañeda in its heyday. Courtesy photo 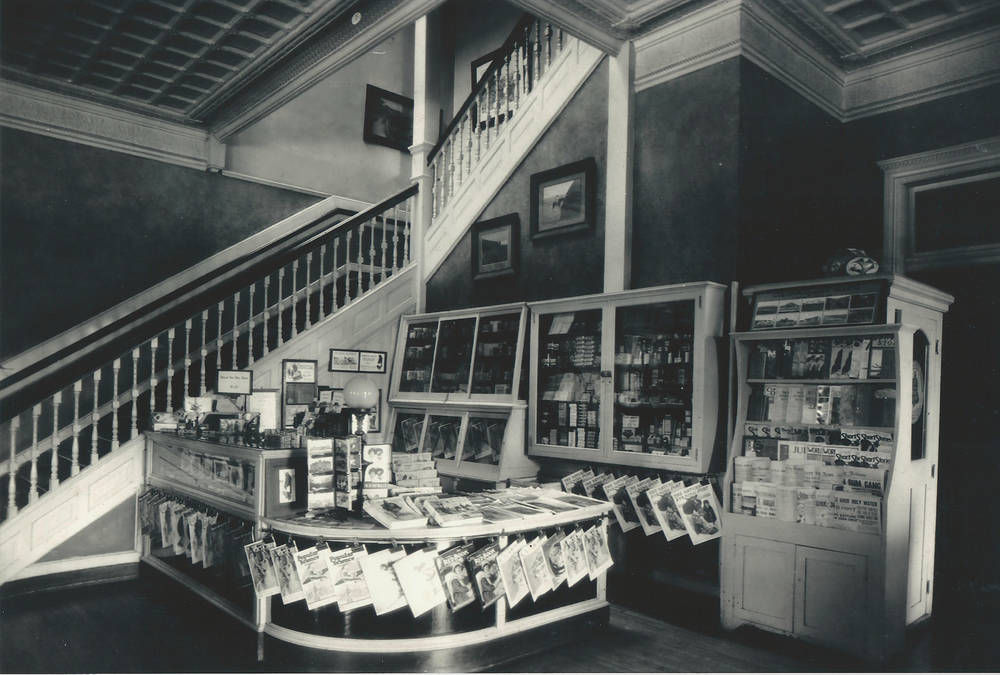 The newsstand of La Castañeda when it was a popular Harvey House. Courtesy photo 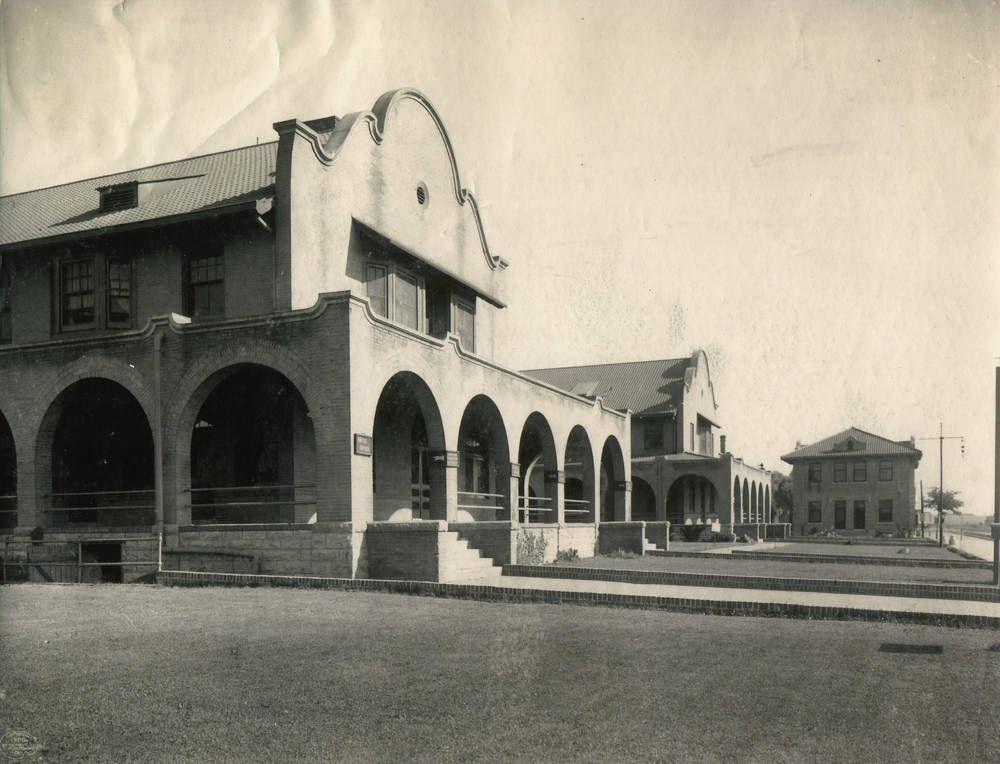 Pat Gonzales, with Grimm LLC, cuts a pane of glass for one of the windows at the historic La Castañeda in Las Vegas, N.M., earlier this month. Most of the demolition portion of the restoration, including replacing 199 windows — all of which were broken — is completed. Luis Sánchez Saturno/The New Mexican

Restaurateur Matt DiGregory takes a look at the tin ceiling in La Castañeda’s ballroom. DiGregory of The Range Cafe fame will run the restaurant and bar for the hotel. Luis Sánchez Saturno/The New Mexican

Developer Allan Affeldt, right, gives a tour of the historic La Castañeda in Las Vegas, N.M., with Jordan Grimm, owner of Grimm LLC, left, and project manager Carlos Lopez. Instead of the original 40 guestrooms, the restored Harvey House will feature 20 larger rooms, each with its own bathroom. Luis Sánchez Saturno/The New Mexican

The dining room of La Castañeda in its heyday. Courtesy photo

The newsstand of La Castañeda when it was a popular Harvey House. Courtesy photo

LAS VEGAS, N.M. — For some 50 years, La Castañeda was considered the queen of Las Vegas, N.M. — an architectural diamond that welcomed locals and visitors alike during the days when train travel reigned.

The high and mighty dined alongside the hoi polloi in the hotel’s restaurant and bar, enjoying the famous Harvey House hospitality. The hotel’s 40 rooms were invariably filled with politicians, celebrities, soldiers and travelers looking to stop for the night before moving on, be it northeast out of New Mexico or south toward Albuquerque and then points west.

“Las Vegas, New Mexico, is the great undiscovered town of the Southwest, with more remarkable history and architecture than Taos or Albuquerque,” said entrepreneur Allan Affeldt, who is restoring the long-shuttered hotel to its former glory. “And La Castañeda Hotel, where Teddy Roosevelt and his Rough Riders held their first reunion in 1899 around the corner from Doc Holliday’s saloon, is the crown jewel.”

Affeldt believes that once he reopens La Castañeda — hopefully in the summer of 2019 — it will once again make Las Vegas a “must stop for travelers who love history and design.”

Affeldt isn’t the only one pinning financial hopes on the long-dormant, horseshoe-shaped hotel, which still looms, with its welcoming belvedere tower, just off the railroad tracks in Las Vegas. San Miguel County Assistant District Attorney Tom Clayton is restoring the nearby Rawlings Building, which once served as a dorm for the Harvey Girls who worked at La Castañeda in its heyday. And artist Charles Ross is renovating a warehouse down the street with hopes of turning it into a studio and retail space.

Together, they hope they can change Las Vegas’ future, not just celebrate its past. But all acknowledge La Castañeda is the linchpin.

“You can notice all the renovations starting in the railroad district,” said Cindy Collins of Main Street Las Vegas, an economic development project with a historic-preservation bent. “The minute La Castañeda was purchased, people started buying buildings in that district and started renovating buildings across the street. It’s already creating economic development.”

“The renovation of this historic hotel helps make this a more attractive rail destination,” she said in an email. “It is our hope that La Castañeda will serve as an anchor business for the renovation of Las Vegas’ railroad business district, and that the railroad district will in turn be a portal into Las Vegas for railroad tourists visiting this historic city.”

For the town of roughly 14,000 people, La Castañeda speaks to Old West traditions and cultures that have permeated the town since it was founded in the 1830s by Spanish settlers. When the railroad came to town some 40 years later, Las Vegas began to boom. The Santa Fe Railway built the hotel in 1898 as the flagship model for an entire architectural fleet of similar properties, contracting it out to restaurateur and entrepreneur Fred Harvey (1835-1901) to operate it for both railroad employees and tourists. Architect Frederick Louis Roehrig designed the facility — the only one he ever did for the Santa Fe Railway, Affeldt said.

“When the Castañeda opened along the tracks in Las Vegas, New Mexico, in 1898 it offered travelers on the Santa Fe Railway an excuse to get off the train and stay in and explore a region of the Southwest few had seen,” said Lesley Poling-Kempes, author of the book, The Harvey Girls: Women Who Opened the West.

“Las Vegas would never be the same.”

But like many Harvey Houses in the West, including some dozen in New Mexico, La Castañeda thrived into the early 1930s, struggled through the years of the Great Depression and finally closed in 1948 after one last gasp of popularity during World War II.

Coincidence or not, Las Vegas’ decline followed in the postwar years. One upside: Since there was so little new business coming in, no one knocked down the old and often vacant historic structures. As a result, many of the buildings in the city are listed on the National Register of Historic Places.

La Castañeda — named after Pedro de Castañeda, who chronicled Francisco Vázquez de Coronado’s expedition through the territory in the 1540s — remained vacant from at least 1950 to 1960 before the railway sold it to John Lawson of Las Vegas. He in turn sold it to Don and Marie Elhd in 1973 for a reported $85,000. The couple had long-term plans to restore it to its former glory, dreams that never came true. Though it sometimes operated as an apartment complex with a bar that somehow stayed open to the end, it fell into disrepair and ruin.

Affeldt and his artist wife, Tina Mion, bought the 25,000-square-foot building in 2014, with the list price at $450,000. Affeldt said he invested some $1.2 million of his own money into the restoration. When support from the New Mexico Finance Authority did not come through, he sought and received mortgage support from Clearinghouse CDFI for $4.5 million and tax credit equity from U.S. Bank for $1.5 million.

This capital will allow Affeldt to open the hotel sometime in 2019 and also allow him to finish renovating the historic Plaza Hotel in Las Vegas, which he also bought in 2014.

Affeldt has hired contractor Jordan Grimm to oversee construction on the hotel. His company is almost done with the demolition portion of the job — tearing down some interior walls, opening up the bedroom spaces, replacing 199 windows — all of which were broken — and removing debris.

Affeldt has hired Matt DiGregory (whose business card reads “CEO + Head Dishwasher”) of The Range Cafe fame to run the restaurant and bar for the hotel. DiGregory said he is considering calling the restaurant “Harvey’s.” His plan is to offer “good quality food. Not fine dining and not casual. Somewhere in between.”

Affeldt and Grimm said they are maintaining as much of the hotel’s original architecture as possible. But because the original hotel’s rooms were small — just enough room for a bed, a dresser and a sink, with guests on the second floor all sharing one bath and toilet down the hallway — they have knocked down lots of walls to make a total of 20 rooms, each happily sporting its own bathroom.

During a recent tour of the hotel, Grimm said the building is in “amazing shape … there’s some water damage here and there.” Working on the project, he added, “is like going to the Super Bowl as a football player.”

The room-tall brick stove oven was still in the building, though Grimm and his crew will relocate and repurpose it. Also still on the premises was the original Fred Harvey bakery, which will be restored in some manner. An old ice box — “possibly the original,” Affeldt said — is still near the old dining room.

“We’re trying to figure out what to do with it,” Affeldt said.

Furnishing the place may not be too serious a challenge, since Affeldt purchased some 950 pieces of historic furniture from La Fonda on the Plaza in Santa Fe — which also served as a Harvey House — several years ago.

The Affeldts bought and restored the railroad-side La Posada Hotel in Winslow, Ariz., which like La Castañeda was built as a Harvey House, for a reported $12 million. He reopened that long-vacant facility 20 years ago. Since then, he said, it has attracted a steady stream of visitors by railroad and automobile, including car club members, Route 66 historians and Harvey House aficionados.

Bob Hall, CEO of the Winslow Chamber of Commerce, said Affeldt’s restoration of La Posada there started “a renaissance” for the town.

When Hall moved to Winslow from San Francisco in 1991, he said it was a town of “three bars — and that was it!

“Now we have gift shops and coffee shops and restaurants and a museum. The movie theater — the Winslow Theater — reopened and screens first-run movies. In the 1990s, Winslow was quickly becoming a ghost town. Its population was under 5,000. Now it’s at 11,000.

“La Posada played a huge role in that,” Hall said. “We knew we had a treasure here. We just needed the right person to discover and reopen it.”

Hall said he would like to see Winslow and Las Vegas work out a cross promotion between the two hotels so railroad travelers could visit one for a day or two and then train on down to the other.

The Amtrak train still stops twice a day at the Las Vegas railway station just down the street from La Castañeda, and Affeldt said he plans to install a light in the belvedere tower that will serve as a beacon to attract people to Las Vegas.

“In the 15 years I’ve been coming here [to Las Vegas], people have been saying they have been waiting for something to happen,” he said.

“I hope this is it. If we do it right, you will feel like you are arriving in 1899. Except we will have modern plumbing.”