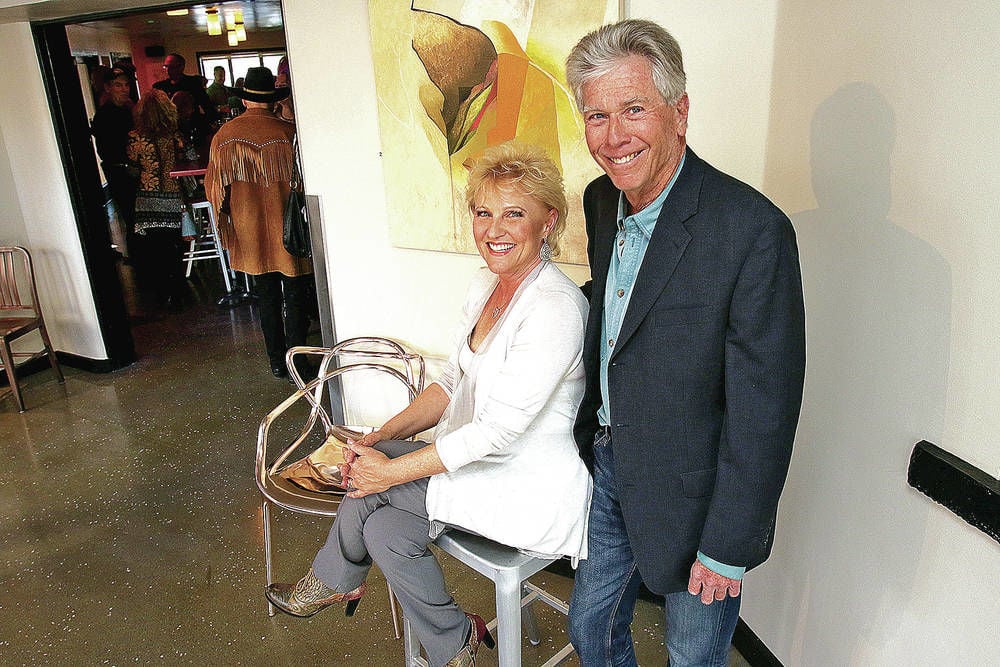 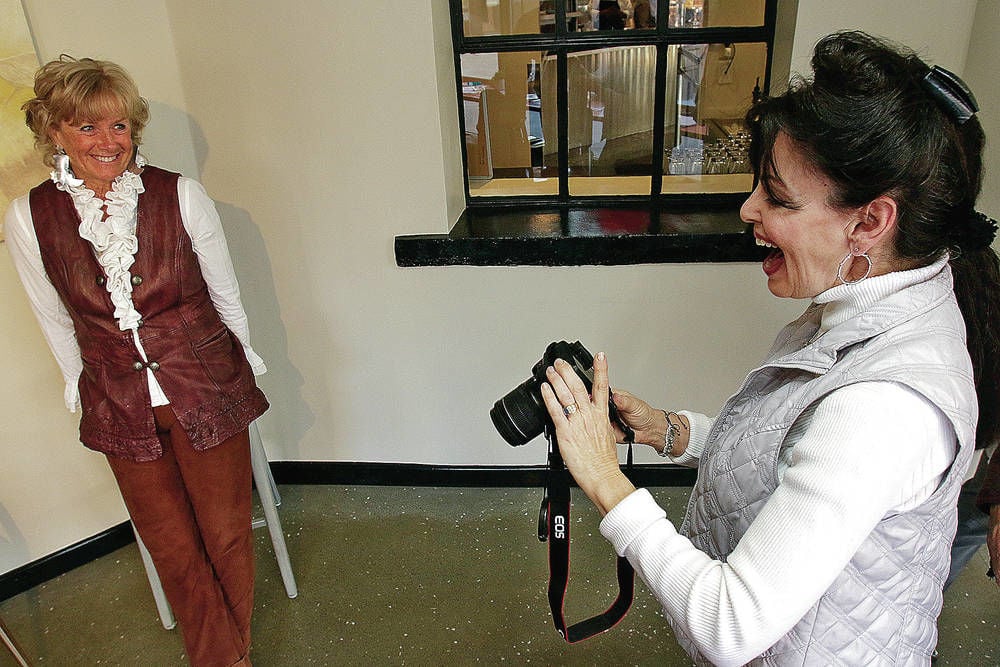 Linda Holley of Santa Fe poses for a profile photo while Deborah Koppel Mitchell views her images. Each guest had a current photo made at a meet and greet Feb. 3 at Cafe Sonder. Jane Phillips/For The New Mexican

Linda Holley of Santa Fe poses for a profile photo while Deborah Koppel Mitchell views her images. Each guest had a current photo made at a meet and greet Feb. 3 at Cafe Sonder. Jane Phillips/For The New Mexican

At 3 p.m. on a beautiful Saturday, Julie Ferman was standing in the foyer of Cafe Sonder looking radiant, ready to greet the dozens of middle-aged singles who responded to her Facebook post. It read: “Single in Santa Fe? Join us for our first Santa Fe event — a fun, casual mixer and group chat with Santa Fe’s very own personal matchmaker and dating coach, Julie Ferman.”

Ferman calls herself a “master of matchmaking,” and her website is no less expansive, billing her as “legendary matchmaker and dating guru.”

That sounds like good work if you can get it, and Ferman has been at this for years, mostly in California. But she has brought her talents to Santa Fe — a dating coach and matchmaker who said she will eventually offer a “full menu of services” to a fairly upscale set of singles.

For now, singles here can register privately and for free on her website. Her goal: Ferman hopes to “build a wonderful base of people to consider for future matchmaking clients” while also helping them minimize the risk of dating failure and optimize their likelihood of success.

Still, finding a valentine — even when it’s not Valentine’s Day — comes at a cost.

Ferman’s services range from consulting ($295 to $495) to matchmaking ($5,000 to $10,000). According to her website, a matchmaking prerequisite is the purchase of a “dating/coaching” consultation. In other words, Ferman wants to make sure you are a matchmaking client she wants to take on. Few blanched at her prices in California. But that may be because she appeals to upscale singles; that is, those who would know how to find the Las Campanas Country Club gatehouse without using GPS.

She says unapologetically that she wants to work with clients who are “marketable” — that is, folks with good skin, good bodies, good attitudes. It sounds shallow, yes, but as Ferman puts it, “If they’re not willing to play the game, they won’t be successful and I’m wasting my time.”

But can it work in Santa Fe, which — as you may have heard — is a looong way from L.A.?

“What I’m seeing already,” she said, “is that the building process [of her business] will be very similar to the way we built in L.A. First … we gather the first 100 or so people. … We will build a really lovely [singles] community here.”

For the short term, Ferman is doing mostly consulting and event planning, trying to build what she calls her “stable of stallions.” She says women are much easier to find and corral. She hosts events like the one at Cafe Sonder so that people can meet — and so she can meet potential clients who might want or need her help.

Certainly, her time doesn’t seem to be wasted at her recent event.

A woman named Dena said she was looking for someone “financially compatible,” and this was her first foray out in a while. She wondered: “Are there enough men in Santa Fe?” and if there are, “are they sitting home, too?” She said “flirting has gotten me nowhere. … I’m tired of being the aggressor.”

Doug, a 70-something professional graphic designer, RSVP’d and also registered on Ferman’s website by filling out a private online personal profile. He said he’d tried online dating and had several first dates. Nothing panned out. Wanting a relationship, he decided to come to Ferman’s Feb. 3 event.

He was greeted warmly by Ferman, who took his photograph to add to his private personal profile. She had a table set up for people to write out their own nametags — Doug wrote his name in bold caps with a red pen. She then invited each guest into the bar, where complimentary drinks and hors d’oeuvres, like fried polenta balls with a Gorgonzola dip, were served.

The bar was filled — Ferman was pleased to count 21 men and 34 women. Most who attended were good looking, well-groomed, well-dressed, ages 50 to 70.

For some of the singles, the mixer was time well-spent.

“I’m very glad I went,” Doug said. “I made several connections there.”

A couple of days after the Cafe Sonder event, Ferman emailed Doug. She called him a “keeper,” and invited him to her next matchmaking event she’s hosting later this month for $40 a person. She calls such outings “conversational quickies,” where people can get to know each other over a nice dinner.

“She’s reeling us in,” said Doug, jokingly, adding he was planning on going to the Las Campanas event but had not yet “bought” any of Julie’s services.

Doug also had called one of the women he’d met at Cafe Sonder, for whom he felt a spark, and with whom he’d exchanged business cards.

All of which, Ferman said, pleases her.

“Things are building nicely,” she said.

One of the things she gets paid for is seeing mismatches ahead of time and saving people from rejection.

“Last night I had a consultation with a 69-year old woman, never been married,” she said over a cup of tortilla soup at Las Campanas. “She was highly selective visually. She wants a good-looking guy.”

What Ferman had to gently get through to her client was that the man she was looking for “is looking for her much younger, much hotter, sister.”

In other words, she advises women: “Don’t veto a guy if he isn’t everything on your list.”

Her favorite client? “One who is happy already, not looking to be fixed,” she said. “Living a life he or she already loves. Wants to share a life, not have a life completed by someone. I’m not going to take a hit for that person who is not living in the real world.”

If a client misbehaves or is a “royal pain in the ass,” she said she’ll drop him or her. She doesn’t negotiate her fees.

Ferman, 58, is radiant and positive — great skin, smile, body. She says she’s been boy crazy since she was 3 years old.

“Everything was great in college,” she said, “but after college, the well ran dry.”

Still, she persevered and ended up marrying the guy who sold her her first dating service — Gil, who owned a Great Expectations video dating service franchise in St. Louis, where Julie was from and returned after college.

Julie was “29.9 years old and fertility challenged” and Gil was in his 40s, still a bachelor. Within weeks, the two were dating. Five weeks later, they got engaged, and within the next several months, they were married and expecting the first of their two children.

Gil sold his matchmaking business, and the couple moved their family to Southern California, where, in 2001, Julie launched her own personal matchmaking agency. Gil owns commercial real estate in California, which more than pays the bills, and Julie’s income is secondary despite the fact she says she made on average $15,000 per month last year with the matchmaking business in L.A. The Fermans have a second home on the West Coast, but their home base is here.

So, on Valentine’s Day (and beyond), here’s some free advice from Julie:

On first dates, “wear something comfortable, something that makes you feel pretty. Don’t wear stupid shoes. Don’t stand in the corner with your arms crossed. Show off your assets. The purpose of events like Cafe Sonder is not to meet your future partner. The focus is on having a good time.”

Oh, and one more thing: “Ask yourself whose life you can enrich today,” she says. “Valentine’s Day should be a day about giving, not receiving. And don’t make a first date on Valentine’s Day — too much pressure.”