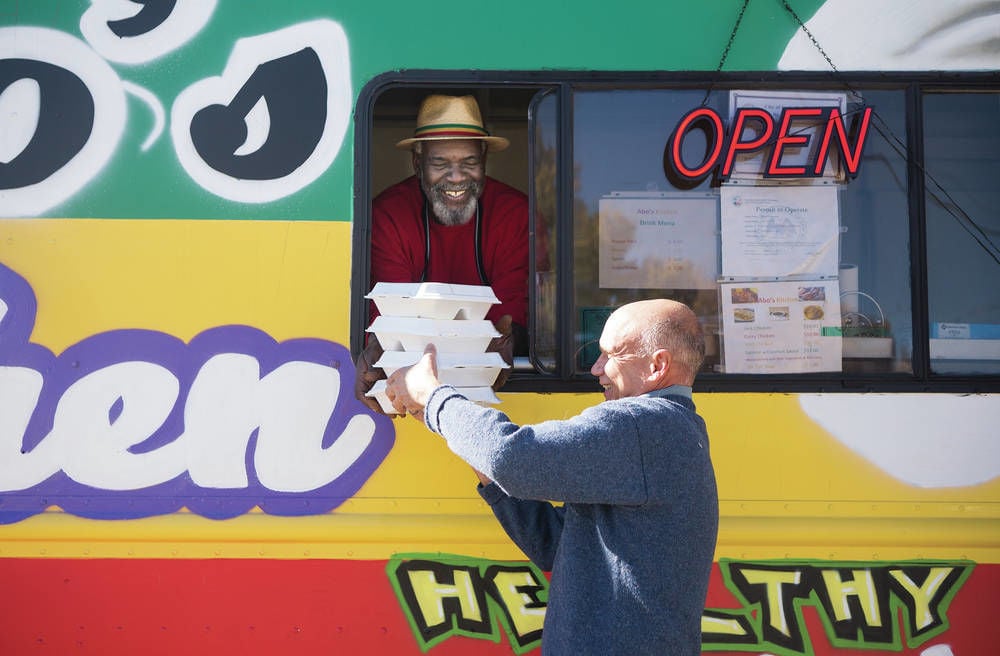 Abo Dalrymple hands food to David Wildes from his food truck. Together, Wildes and Dalrymple served 20 meals to the Interfaith Community Shelter on Wednesday. About a week ago, they gave 60 meals away, and the week after Thanksgiving, they plan to distribute another 40. Olivia Harlow/The New Mexican 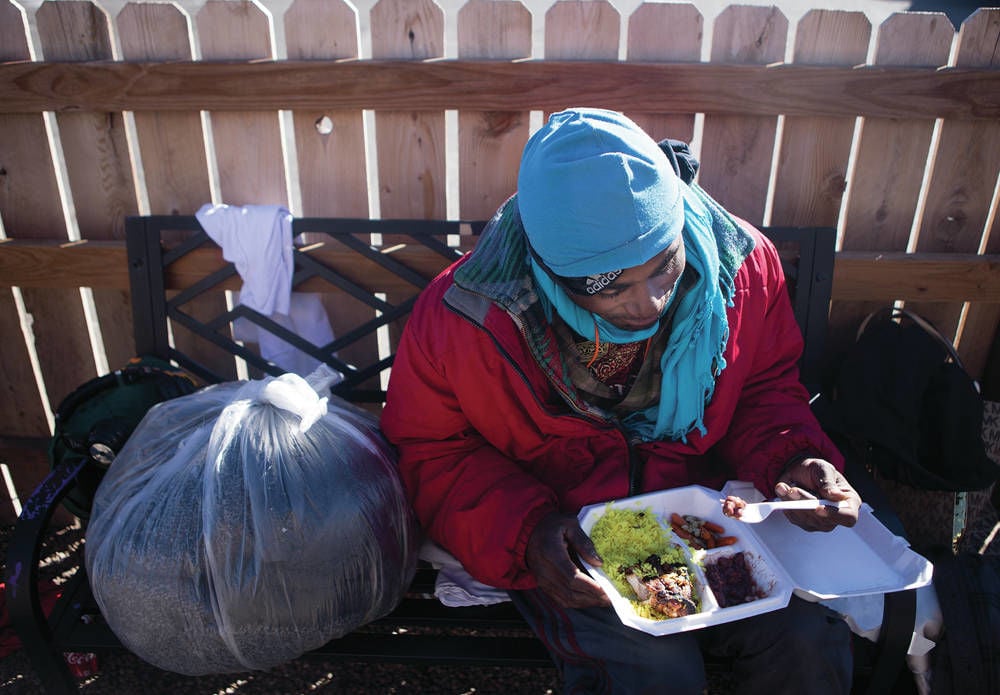 Ibrahim Abdullah, who is homeless, enjoys a meal Wednesday from Abo’s Kitchen delivered by David Wildes. ‘We need food to survive. It’s a blessing,’ he said. Olivia Harlow/The New Mexican

Abo Dalrymple hands food to David Wildes from his food truck. Together, Wildes and Dalrymple served 20 meals to the Interfaith Community Shelter on Wednesday. About a week ago, they gave 60 meals away, and the week after Thanksgiving, they plan to distribute another 40. Olivia Harlow/The New Mexican

Ibrahim Abdullah, who is homeless, enjoys a meal Wednesday from Abo’s Kitchen delivered by David Wildes. ‘We need food to survive. It’s a blessing,’ he said. Olivia Harlow/The New Mexican

David Wildes pulled up to the Interfaith Community Shelter at Pete’s Place with a load of food for Santa Fe’s homeless community — 20 boxes of jerk chicken and barbecue platters from a food truck, Abo’s Caribbean Kitchen.

The idea was simple, Wildes said: Do something nice for a group of people that often is either harshly judged or overlooked. He started raising money from friends and acquaintances to purchase meals from food truck owner Abo Dalrymple, a native of Trinidad, and distribute them to those in the city who are most in need.

What he didn’t expect, he said, was a personal shift: a new outlook on homelessness, as well as a heightened consciousness of his own consumption.

“This whole thing has changed my perspective,” said the self-proclaimed hippie — adding he hates that word.

“The simple act of gifting — I don’t think about things anymore,” he said. “I would rather give.”

The idea to raise money for the cause came like an epiphany, Wildes said, while he was dining at Abo’s for the first time about a week and a half ago. As he was licking up sauce from his jerk chicken, he started thinking about how many people don’t get to enjoy meals like Abo’s healthy island cuisine — on Thanksgiving Day or otherwise.

He decided to do something meaningful.

He then approached Dalrymple with his idea of a holiday meal distribution. Dalrymple immediately wanted to participate and offered his meals at a discount.

“I think about the homeless people a lot,” said Dalrymple, who began operating the food truck next to Tumbleroot Brewery and Distillery on Agua Fría Street about four months ago. He’d been thinking of how to give away some of his leftover “soul food” to those in need, even before Wildes approached him.

About a week ago, Wildes bought 60 meals from Dalrymple. He purchased 20 more Wednesday and said he plans to use the remaining donations he collected to buy another 40 meals the week after Thanksgiving.

And, of course, “his jerk chicken is the best,” Wildes said with a laugh.

While he has enjoyed spearheading the holiday effort, Wildes said it’s arguably more important to serve the homeless and others in need on any ordinary day.

“Outside of Thanksgiving,” he said, “people still need to eat.”

“We hope people will spread out their efforts beyond Thanksgiving Day,” said Executive Director Joseph Jordan-Berenis.

Right now, he said, the homeless population in Santa Fe is “booming.”

Thanksgiving is the shelter’s most popular day of the year when it comes to volunteerism. It will offer guests a brunch Thursday morning, Jordan-Berenis said, and in the afternoon, it will serve up a feast.

“We’ve got 14 frozen turkeys in the fridge right now,” he said.

“This shelter runs on good graces of the people in the community,” Jordan-Berenis said, pointing to Wildes. “This is how it gets done. … The amount of people who get involved to care for the chronically homeless here is amazing.”

The shelter, which serves 120 to 125 dinners each day and houses about 100 people per night throughout the fall and winter, relies on the help of more than 2,000 volunteers.

“It means everything,” said Ibrahim Abdullah, a shelter guest, as he clutched his platter of food provided by Wildes. “We need food to survive. It’s a blessing.”

Wildes said he hopes his small effort will help change the minds of those who don’t understand homelessness, just as his views have shifted.

“Put yourself in their shoes,” he said.

Jordan-Berenis said he also hopes more people will open their minds to those in the homeless community.

“I want people to see the humanity in the people we serve,” he said. “They see mental health issues and the dirty clothes, but underneath, that is a brother, a daughter.”

For more information on how to volunteer at the Interfaith Community Shelter or donate to the facility, call volunteer coordinator Sue Carr at 505-795-7494 or visit the shelter’s website, interfaithsheltersf.org.