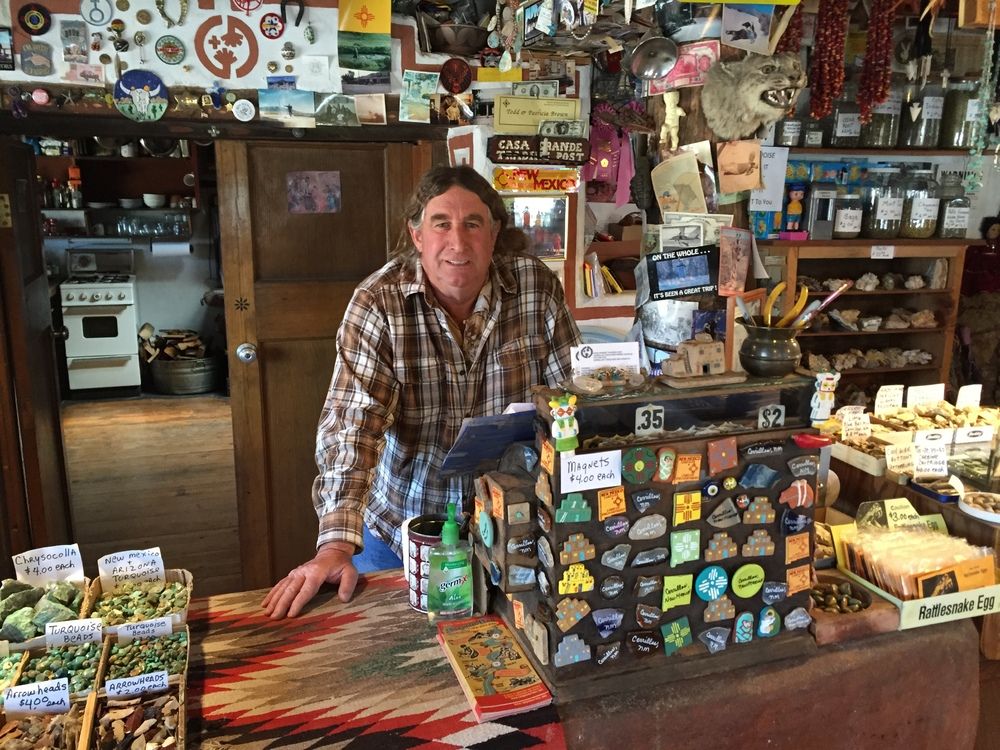 Todd Brown, who owns the Casa Grande Trading Post with his wife, Patricia, is the unofficial historian for the town of Cerrillos, and said the new businesses planned for the main street will give visitors a reason to stay longer and indulge in the mining culture and unique history of the community. Bruce Krasnow/The New Mexican 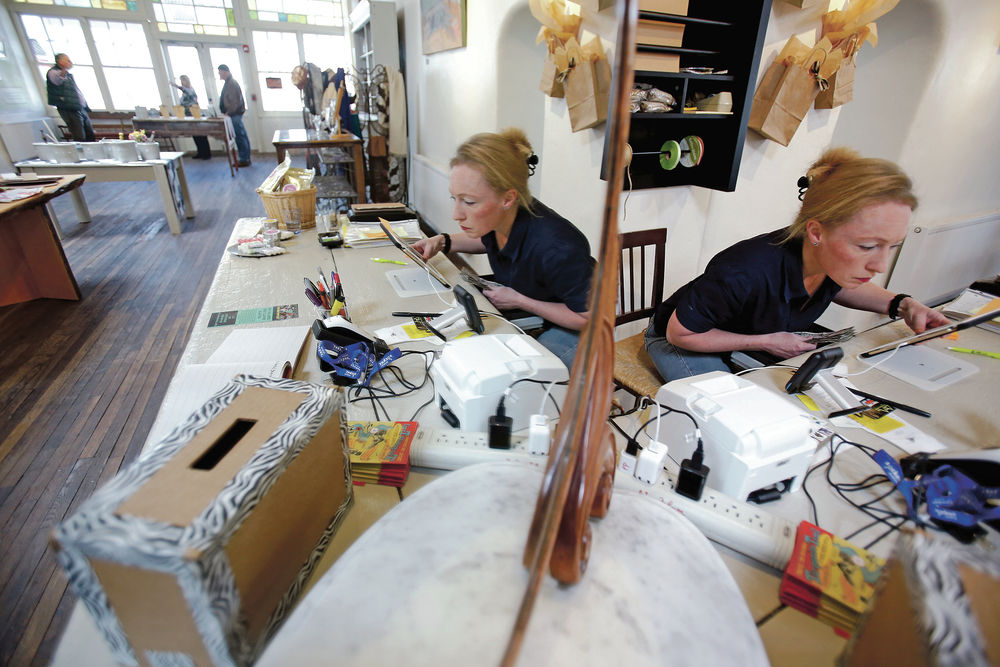 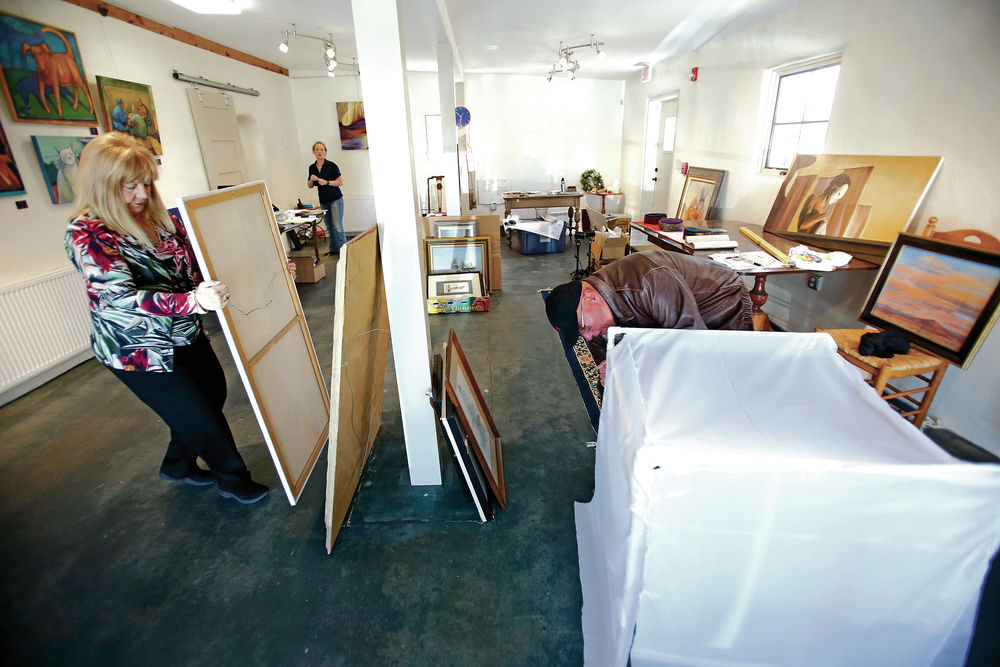 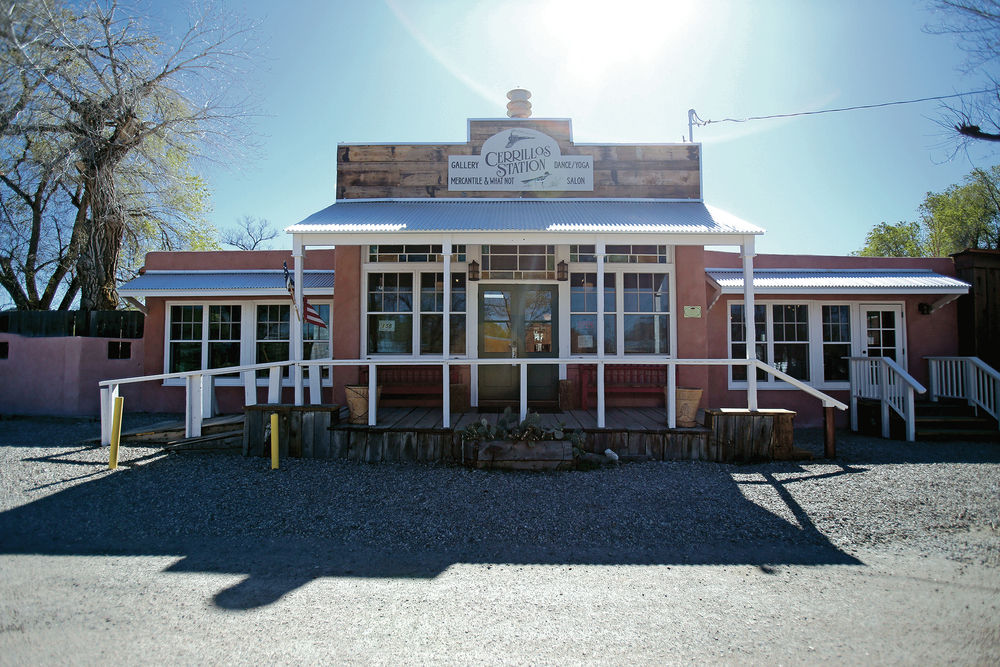 Cerrillos Station in Cerrillos is a new community gathering place in the old mining town of Cerrillos that offers food and drink as well as a gallery, working studios and bike rentals.Luis Sánchez Saturno The New Mexican 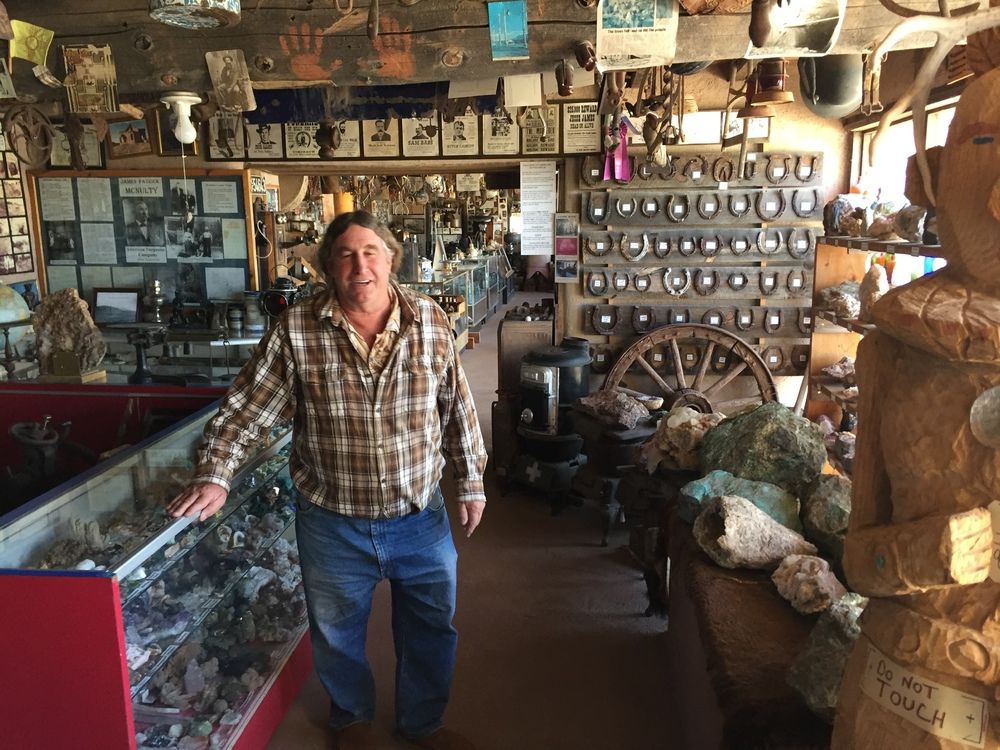 Todd Brown at the Casa Grande Trading Post, which he owns with his wife Patricia. Bruce Krasnow/The New Mexican 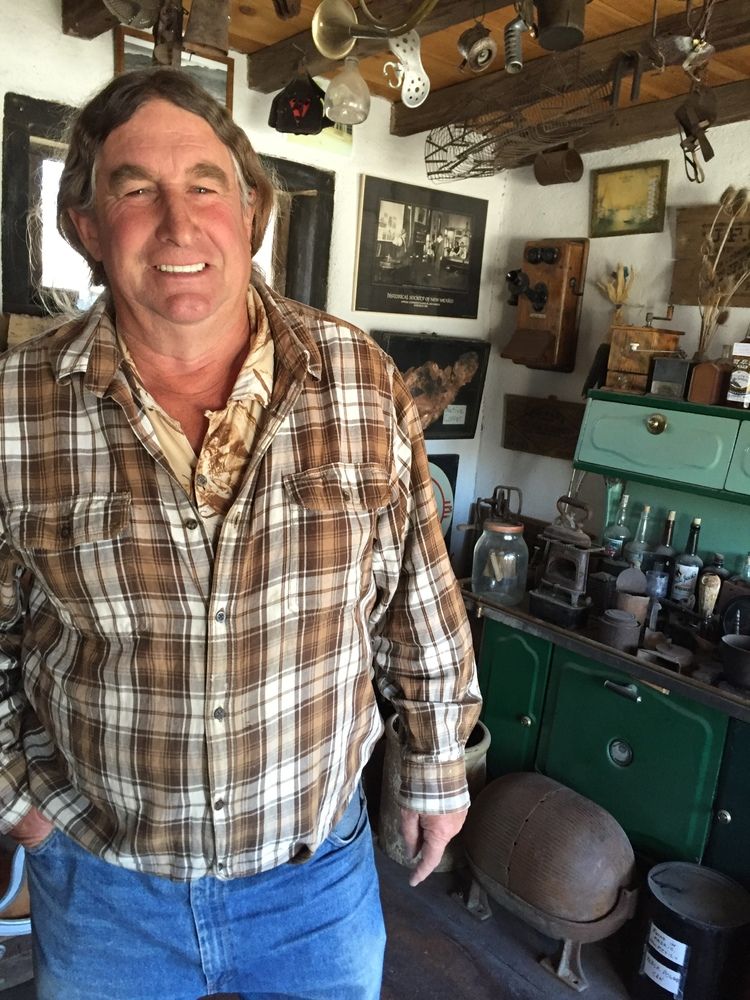 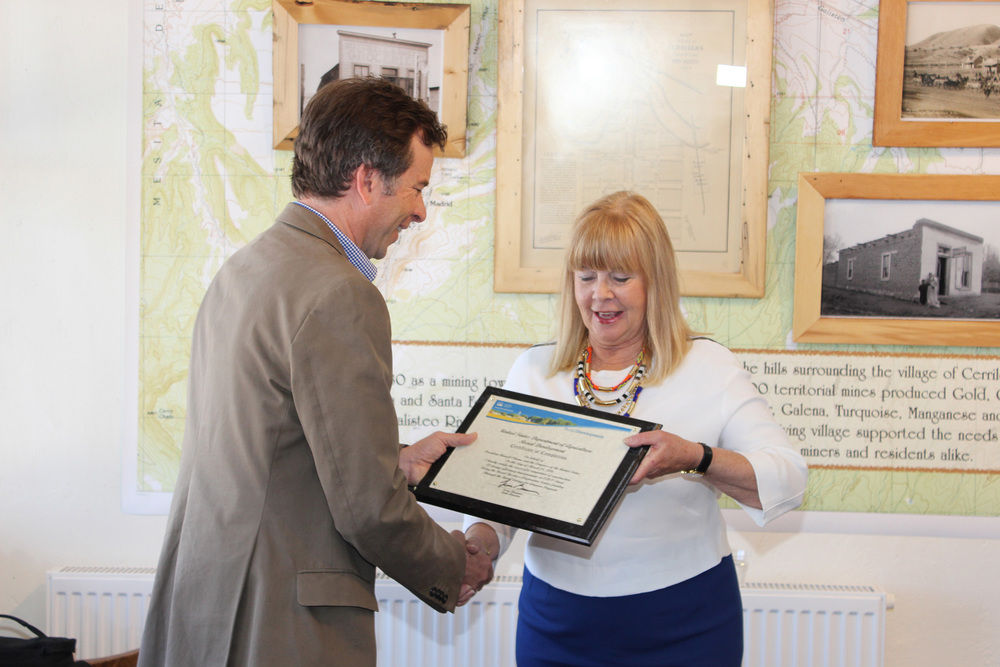 Todd Brown, who owns the Casa Grande Trading Post with his wife, Patricia, is the unofficial historian for the town of Cerrillos, and said the new businesses planned for the main street will give visitors a reason to stay longer and indulge in the mining culture and unique history of the community. Bruce Krasnow/The New Mexican

Cerrillos Station in Cerrillos is a new community gathering place in the old mining town of Cerrillos that offers food and drink as well as a gallery, working studios and bike rentals.Luis Sánchez Saturno The New Mexican

Todd Brown at the Casa Grande Trading Post, which he owns with his wife Patricia. Bruce Krasnow/The New Mexican

The old tunnel in the basement of a landmark building here is sealed off with dirt, but there was a day when it led under the street to a saloon that flourished during Prohibition.

It was one of a dozen saloons and hotels that remained from the precious mineral boom in the 1880s. Men came from across the Midwest and East to chase the gold, zinc, silver and turquoise in the Cerrillos Hills.

But don’t tell Barbara Briggs, who has spent a year renovating the 1893 building where the tunnel ended, that the golden days for the town of Cerrillos are over. She and other new investors, one planning to rent electric bikes, another to open a business called the Blackbird Saloon, are hoping to again imbibe visitors with the town’s colorful history.

“It will be a boost to the whole community to have a quality business, but also a historic one,” said Briggs, who lives off Gold Mine Road. “The village doesn’t want a lot of new buildings. We don’t want to duplicate what tourists have in Madrid.”

Cerrillos sits along N.M. 14, a stretch from Santa Fe to Interstate 40 dubbed the Turquoise Trail, in honor of the precious metals that boosted the area. “Cerrillos was once seriously considered as the capital of New Mexico,” according to a sign in the village.

Today, hundreds of cars might drive through Cerrillos as they take the loop from Albuquerque through the Sandia Mountains to Madrid and up into Santa Fe. Madrid is one town that has cultivated its own sense of place for tourists who stop at the Mine Shaft Tavern and Museum, another eatery or visit glass studios, shops and artisans.

Cerrillos has not been as much of a destination, its main attraction being the Casa Grande Trading Post and Petting Zoo, a former hacienda owned by Todd and Patricia Brown. It sells all kinds of turquoise and other mineral rocks as jewelry and offers a tour of Todd Brown’s museum relics and artifacts. One of his zoo goats is expecting babies in two weeks.

“We’re trying to jump-start Cerrillos,” Todd Brown said. He and his wife still work two mining claims in the hills. His mining museum flows with history of the area, and he is responsible for building the historical database for the town at www.cerrillosnewmexico.com and placing informational plaques on buildings.

“There are still tunnels all under First Street from Prohibition,” he said. “I’m excited we’ll have two bars in Cerrillos. Once there were 15.”

Santa Fe County plans to repave the main street in Cerrillos this summer and has acquired land for a senior center, Brown said. That is in addition to the Cerrillos Hills State Park, the state’s newest public land acquisition, which recently opened a visitors center in town. The park hosts talks and lectures, and offers historical tours of the hills where mining thrived. The park is also open for self-guided hikes and day use all year.

Steve and Bonnie Gibons, owners of Cerrillos e-bike rentals, are even planning to rent 500-watt electric bikes to give history tours of the town and the surrounding landscapes. The bikes are on order, with rentals expected to begin in mid-April.

“We’re both history buffs, and we want to take people through the town, stop and show then the sites,” Steve Gibons said.

One of the stops for bike tourists might be lunch at the Blackbird Saloon, another restoration in the town by Patrick and Kelly Torres, longtime Santa Fe restaurant workers. The couple have a beer-and-wine license and a building permit and hope to begin work next week, with an opening set for late May or early June.

Patrick Torres said they had long dreamed of opening a place of their own outside of town, and Cerrillos offered the chance to reopen a rustic building deep in history.

“We’re aware of the history, not only of that building but what Cerrillos has, and we want to make our place as authentic and true as possible,” he said. “We’re taking our time to keep that old historic Western feel.”

Kelly Torres said the menu will be simple sandwiches, chicken and fresh, local items that appeal to the local outdoor culture. They hope to take advantage of hikers at the new state park, the bike tourists as well as those on horseback from Harold Grantham’s Broken Saddle Riding Co., which has guided trips through the Cerrillos Hills.

There is also an effort underway by the family that owns Mary’s Bar to clean up that property and keep the business operating with more regular hours. Mary’s has been in business since 1936.

For Briggs, the vision is for the 3,800-square-foot building called Cerrillos Station to be the new town center. The property at 15B First St. is also known as the Mitchell store because the family of E.J. Mitchell ran an antique and secondhand shop there from 1957 to 2013, known as the “What Not Shop.”

The Cerrillos Station retail business opened last week with crafts and artwork, as well as household goods. In coming weeks, Briggs is developing other parts of the building for services that would include art classes, massage, hair-styling, dance, senior yoga, children’s dance and Pilates.

“This was one of the first things people asked for,” Briggs said. “There’s no place to work out in the area.” She said many who live nearby are used to going to Santa Fe for basic needs but don’t want to go all the time.

She sees the business as a place for outdoor events in the summer and hopes to serve some 10,000 people who live along N.M. 14 south of Santa Fe. There will also be an outdoor seating area and sculpture garden.

Most of the original trim, a paneling called wainscoting, as well as glass, tin ceilings and fixtures, has been saved and old wooden windows have been repurposed. The heating is a hybrid solar system, including radiant heat, that can be controlled from a cellphone.

The U.S. Department of Agriculture’s Rural Energy for America Program awarded the project a $25,554 grant and recognized Briggs for the preservation work at a ceremony last week.

She said N.M. 14 has become a day trip for many visitors to Santa Fe and Albuquerque and is increasingly popular with motorcycle riders. Many come to Cerrillos now, take a few photos of the church and the adobe homes, then leave.

“Look at Madrid,” added Brown, “It’s packed, we’re hoping to get some of that overflow.”