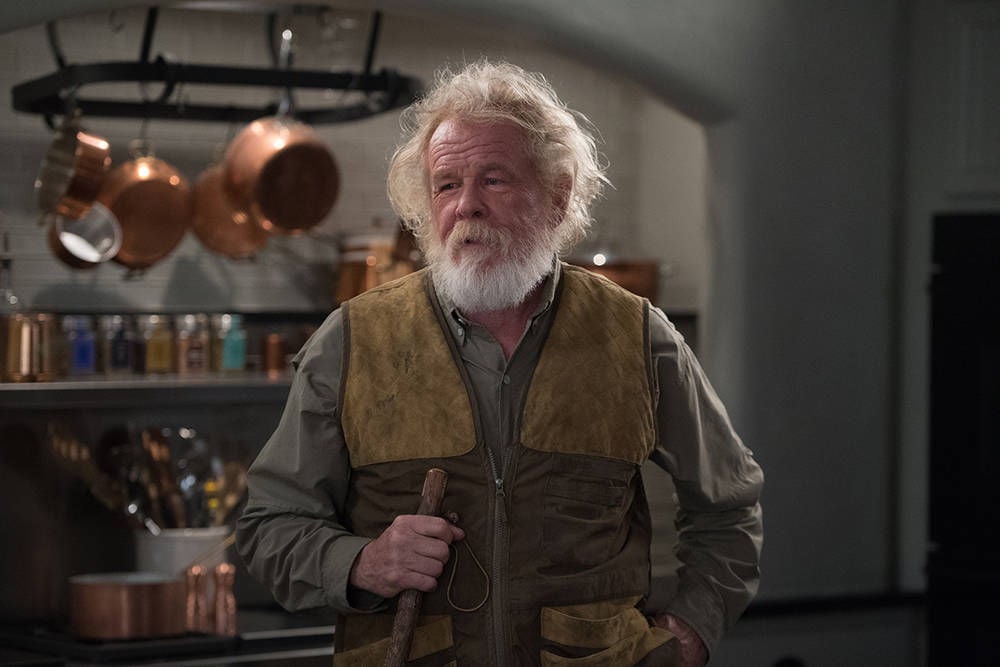 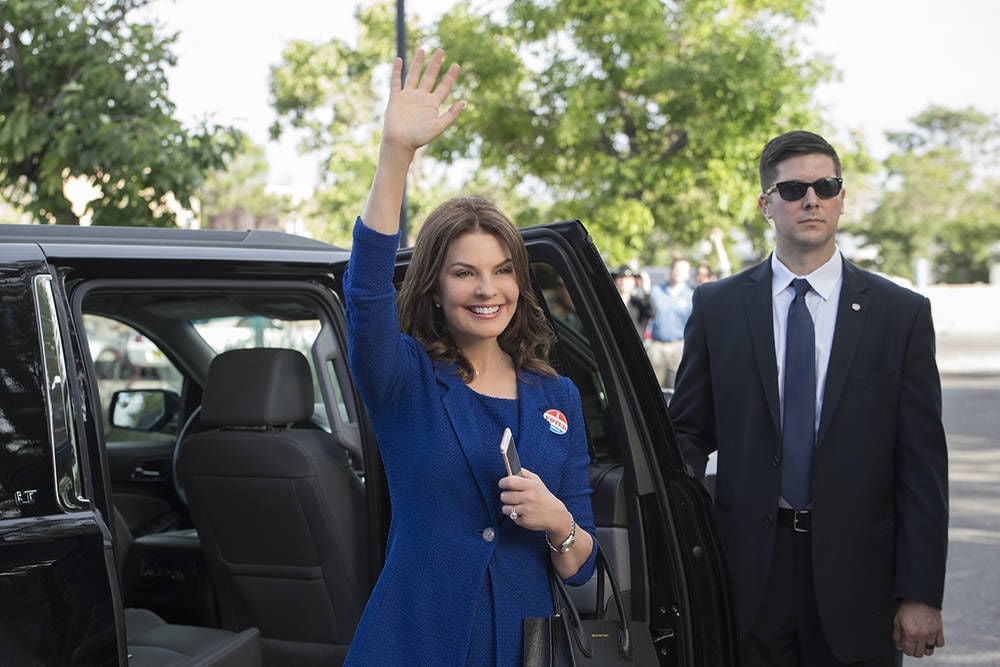 Sela Ward in the second season of Graves, a political drama that has filmed in and around Santa Fe. Ward’s Margaret Graves, a former first lady, is seeking a Senate seat in the new season. Courtesy EPIX 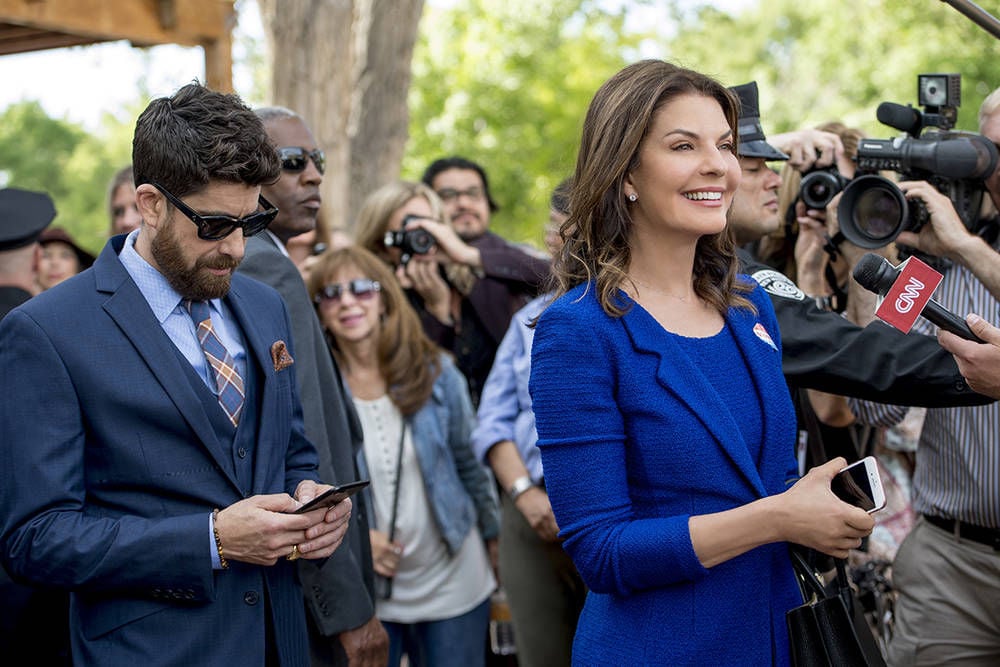 Sela Ward in the second season of Graves, a political drama that has filmed in and around Santa Fe. Ward’s Margaret Graves, a former first lady, is seeking a Senate seat in the new season. Adam Goldberg, who plays her campaign manager, left. Courtesy EPIX 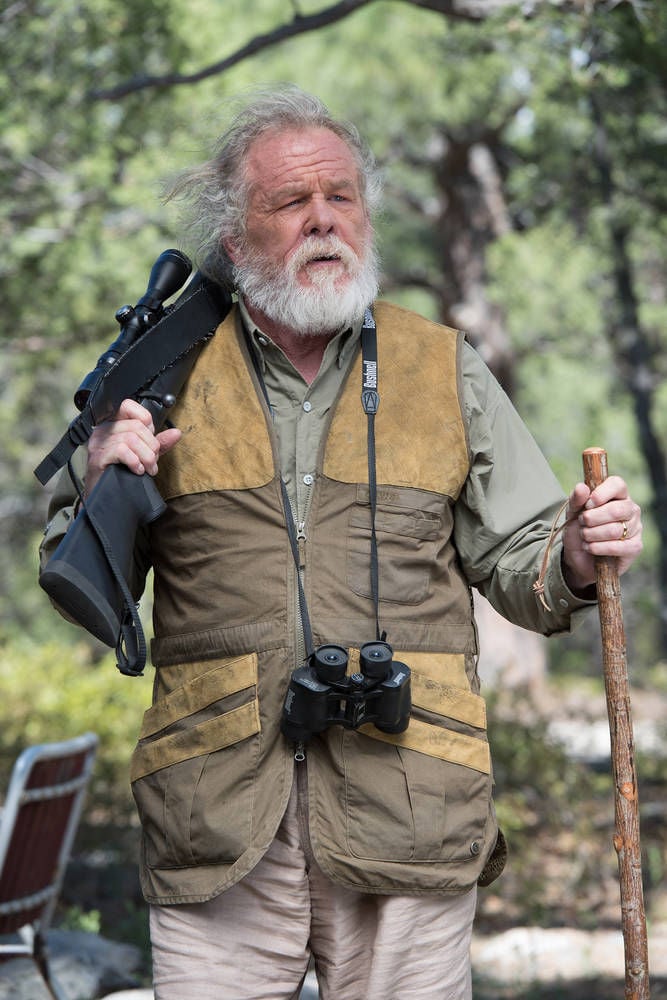 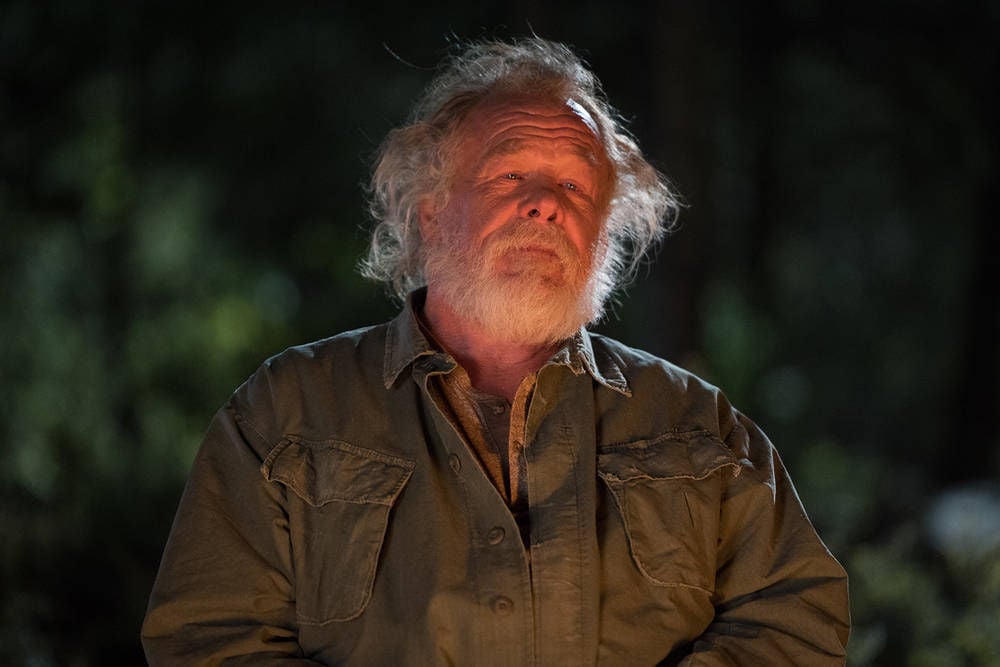 Sela Ward in the second season of Graves, a political drama that has filmed in and around Santa Fe. Ward’s Margaret Graves, a former first lady, is seeking a Senate seat in the new season. Courtesy EPIX

Sela Ward in the second season of Graves, a political drama that has filmed in and around Santa Fe. Ward’s Margaret Graves, a former first lady, is seeking a Senate seat in the new season. Adam Goldberg, who plays her campaign manager, left. Courtesy EPIX

Nick Nolte emerges into the July sun. “Hoo, boy,” he exhales, wearing a long-sleeved flannel shirt and suspenders clinched to thick khakis — too warm for high summer in Santa Fe.

Nolte is reading over some slip of script and moving at his own pace toward the day’s set — a patchy yard southwest of town made to look like the backdrop for a barbecue, with sweeping views across the Caja del Rio. No rush. When you’re Nick Nolte, they’ll wait.

The action swirls in the stifling afternoon heat around him. Hundreds of crew members ferry props and cables and gear to and fro. Stand-ins seek shade under the juniper. Calls for quiet ring out as scenes start and stop. Production assistants arm child actors with massive plastic squirt guns (“Give it a good pump here, then fire,” goes the explanation as they walk; the troops dutifully shoot refreshing practice rounds).

The rain, and some relief, won’t reach the Graves set for hours. In the meantime, in the heat, Sela Ward, who plays Nolte’s on-screen wife, speechifies from the trailer bed of a rusty burnt-orange pickup with Texas plates.

“I expected six of you and 60 showed up!” she twangs. A hundred extras send up a cheer. Her character is seeking a Senate seat. This here’s a campaign event of some sort.

Adam Goldberg, who plays Ward’s ruthless campaign manager, watches from a distance. As a producer arranges him for a shot, Goldberg quips, “Can we move the sun closer to my face for this one?”

By now the Graves team is plenty familiar with the Northern New Mexico summer temperatures. Two seasons of the political drama are in the can.

And the new 10-episode season of the half-hour series premieres Sunday on EPIX, a premium cable network. A pair of free episodes are already available on the network’s website.

An EPIX spokeswoman said the network declined to comment on the show’s future. But the show has earned a surprise laurel — a 2017 Golden Globe nomination for Nolte, 76, in the category of lead actor in a comedy or musical — and fair reviews from critics, who particularly like the cast, gravel-voiced Nolte most of all.

Nolte’s Graves is a folksy Republican former president — and governor of New Mexico — who comes to appreciate the harm his administration’s policies wrought after a sustained protest of his legacy is launched. Meanwhile, his wife, Margaret, wants to leap back into the arena and realize her own political aspirations.

If not for the state’s tax incentives for film and television productions, Graves might’ve been a California operation. Palm Springs, Calif., was slated as the Graves’ home at the outset.

Emmy-winning producer Bill Hill, who’s worked with New Mexico productions for three-plus decades, was part of the lobbying effort to bring Graves to the Land of Enchantment instead.

“That was one of those early conversations: Where does President Graves live?” Hill said. “We changed it to Santa Fe, made it all about New Mexico.”

“I mean, Lionsgate [Television, Graves’ production company] has been coming here forever, but the incentives are what drives where productions go,” he added of the decision.

“And we like them because they’re long term,” Witt said. “They really develop the local crew; they develop the local vendor base. And the fact they keep coming back is a testament to how professional we are here, and how much [TV series] enjoy being in New Mexico.”

According to the state film office, each season of Graves has employed 200 New Mexico crew members and 2,500 local background actors.

Hill estimated Graves’ crew had been 95 percent New Mexico workers across its two-year run and said the production had elevated several crew members to positions of higher authority from Season 1 to 2 — a costume supervisor was given a chance to be a costume designer, a location manager became a production supervisor and so on. Unlike a large feature film production, television operations, with the possibility that they’ll return year after year, should have the inclination to “use local people, train local people and leave ’em behind,” Hill said.

“To me, it’s a matter of training people and keeping good people in business,” he said.

And Graves is that rare beast: A production shot in New Mexico that is also set in New Mexico, rather than the vast plains of Texas or Wyoming or extraterrestrial turf.

Local viewers will recognize the Plaza, the Roundhouse, El Rancho de las Golondrinas, the Lodge at Santa Fe, and parts of Albuquerque and Rio Rancho, where the production offices are located.

One recurring location from the first season will not be back: The Plaza Cafe in the heart of downtown, a favorite spot of Nolte’s Graves.

Replacing it is Silva’s Saloon in Bernalillo, where the character who worked at the Plaza Cafe has since moved with her band.

Ellen Pfirrmann was particularly thrilled to have filmed at the Santa Fe National Cemetery. Officials there originally told the production, which wanted to shoot an emotional scene with the ex-president at the gravesites of soldiers he’d ordered into battle, to look elsewhere, Pfirrmann, the location manager, recalled.

“Generally, we don’t [allow filming],” Howard said. “These are hallowed grounds. But if you can provide the script and give the logical reason why — basically present the case — why it’s essential and why it’ll be respectful to the veterans, we’ll send it up and consider it.”

Howard said in his seven years with the National Cemetery Administration, the Graves’ pitch was the only one he could recall having been granted.

“Turning a no into a yes, that’s always exciting,” Pfirrmann said.

“What’s really great about Graves is it is of this place,” she added. “It’s a showcase for New Mexico, and Santa Fe in particular. We’re not doubling as some place else, like the Middle East desert, or whatever it might be. It’s fabulous. I really like the way the show looks.”

And the way the show feels — even in flannel. Even in the heat.