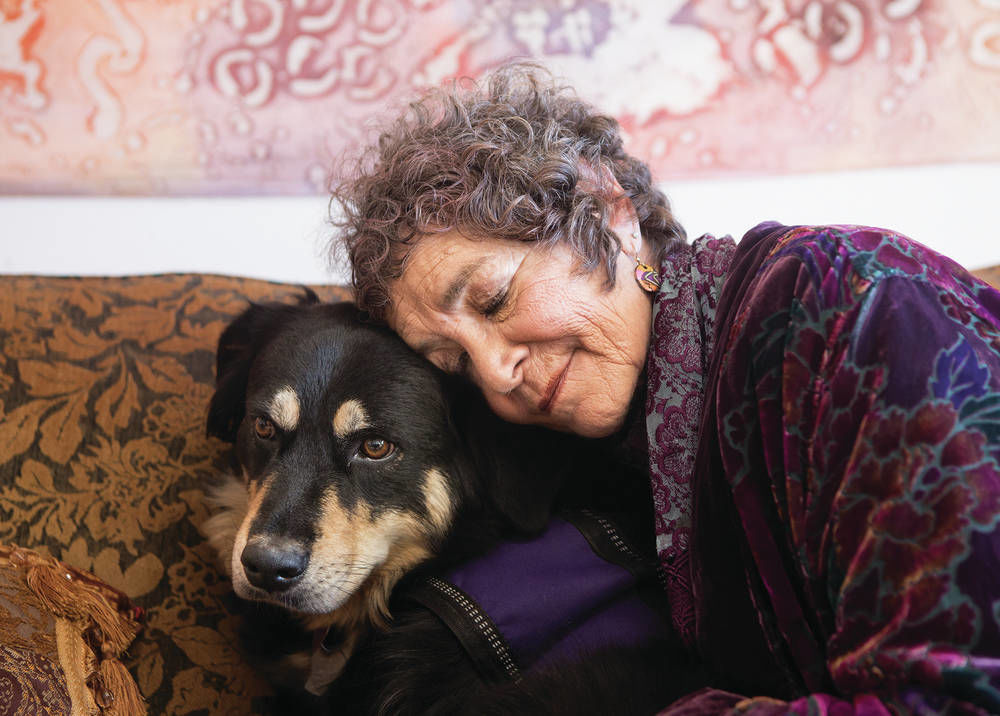 Meryl Lieberman cuddles with with her service dog, Bear. Because of the impact dogs have had in her life, Lieberman said she’s always allowed pets at Casa Milagro. Olivia Harlow/The New Mexican 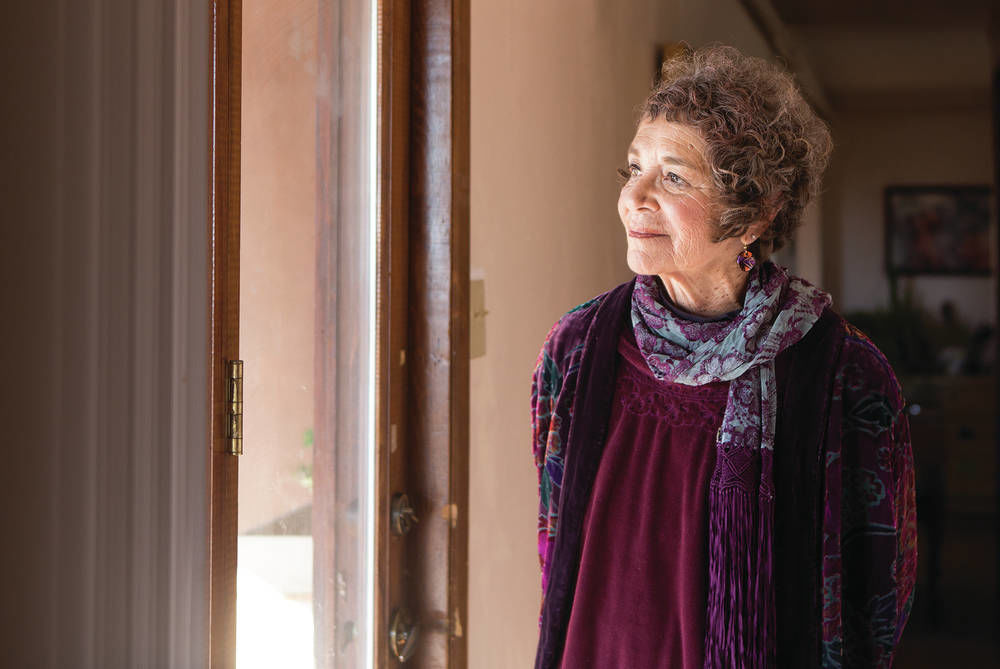 Meryl Lieberman started Casa Milagro as house of miracles for people with mental illness. The home hosts 12 residents of various backgrounds, all of whom Lieberman sees as equals. Her goal is to offer a place of healing to them, she says. Olivia Harlow/The New Mexican

Meryl Lieberman cuddles with with her service dog, Bear. Because of the impact dogs have had in her life, Lieberman said she’s always allowed pets at Casa Milagro. Olivia Harlow/The New Mexican

Meryl Lieberman started Casa Milagro as house of miracles for people with mental illness. The home hosts 12 residents of various backgrounds, all of whom Lieberman sees as equals. Her goal is to offer a place of healing to them, she says. Olivia Harlow/The New Mexican

Casa Milagro is a sprawling maze of a home, with art-filled walls and a big kitchen where the motley mix of residents gather.

Damian has lived there for more than 20 years; Elizabeth, 11; Sherry, 5. They are three of home’s 12 residents, people from a variety of backgrounds, with unique life stories and different diagnoses. They consider themselves a family.

If it weren’t for this home, this house of miracles for people with mental illness, they might be living on the streets.

“Casa Milagro is a very special place for the wounded, for the lost,” said 68-year-old Elizabeth, who declined to give her last name. “It opens its arms to people.”

The home was started by psychologist Meryl Lieberman, who knew firsthand the horrors of badly run treatment centers for people with mental illness. She had witnessed them as she was growing up in Annapolis, Md.

“My father’s mother was mentally ill,” said Lieberman, 71. “She was in and out of hospitals. I got to see what happens in those hospitals … and I said to myself, my life is going to be dedicated to keeping people out of those prisons — they’re prisons.

Lieberman, who no longer works as director and clinical coordinator at Casa Milagro but still volunteers there and serves on the board, has been selected as one of The New Mexican’s 10 Who Made a Difference for 2018 — in large part for carrying out this mission she developed in her childhood.

She has been involved with a long list of councils and boards focused on social justice issues, such as the New Mexico Coalition to End Homelessness and the local chapter of the NAACP. Lieberman and her service dog, Bear, often visit with schoolchildren and help them read.

Casa Milagro board President Ellen Rosell, who nominated Lieberman for the award, said, “She fulfilled her dream by creating Casa Milagro” and continues to bridge barriers, celebrating diversity and “remembering to smile at strangers every day.”

Lieberman credits her father, Leonard “Skip” Lieberman, with sparking her passion for serving others.

“I had a father who really strongly believed in social justice, and he was my first mentor,” she said, adding that her father inspired her to do civil rights organizing in her youth. They led voter registration drives together, she said. “And, of course, he took me to Dr. [Martin Luther] King’s march.”

After graduating from high school, she attended the University of Maryland and went on to a graduate program in psychology at George Washington University.

Lieberman moved to Santa Fe in the late 1980s and began working at the Life Link, where she started a program for mentally ill homeless people. A few years later, she began planning Casa Milagro.

In its current form, the home is the nonprofit’s second incarnation on an expansive property off N.M. 14, south of Santa Fe. The first went up in flames three weeks after it opened in 1995. A faulty chimney was to blame.

Not long after the fire, the U.S. Housing and Urban Development Department gave the organization $1 million to rebuild the home and expand it to 6,200 square feet, with 12 bedrooms, art and meditation rooms, and a garden out back.

The home is staffed 24 hours a day. Residents must agree to follow rules: no alcohol or drugs, no violence — not even in language. Also, no stealing, no firearms, no smoking or candles. Medications are locked away.

The home doesn’t say no to pets.

There’s one cat and five dogs (six when a staff member brings her pet and seven when Bear, Lieberman’s companion, comes around), as well as salamanders and tiny sea creatures in aquariums.

Interns from local colleges come in to lead activities, such as art therapy and yoga.

Residents, whose rent payments are a portion of their disability income, meet every morning to discuss concerns and divvy up chores.

HUD saw the organization as a model to help fight homelessness, said Lieberman, who built the framework for the home and has worked for years to ensure its doors stay open.

Unfortunately, the idea hasn’t spread: In the Santa Fe area alone, she said, “there need to be 12 Casa Milagros.”

Elizabeth, a mother of three who said she was diagnosed decades ago with multiple personality disorder, recalled her first visit to the home.

“I had so many reservations,” she said. “I was scared to death.”

As she spoke with Lieberman and others, she said, “I told them why I needed help, and I came to grips with that as I was talking.”

During her years at the home, Elizabeth said, “I’ve grown so much. A lot of love has come around.”

That was the goal, Lieberman said. Casa Milagro isn’t housing: “It’s a family of choice.”

Sunday: 10 Who Made a Difference, a special publication featuring the 2018 honorees

For the third year, The New Mexican will celebrate its 10 Who Made a Difference honorees with a dinner and awards presentation at La Fonda on the Plaza. This year’s event is at 5 p.m. Dec. 6. Tickets are $80 and can be purchased at ticketssantafe.org.