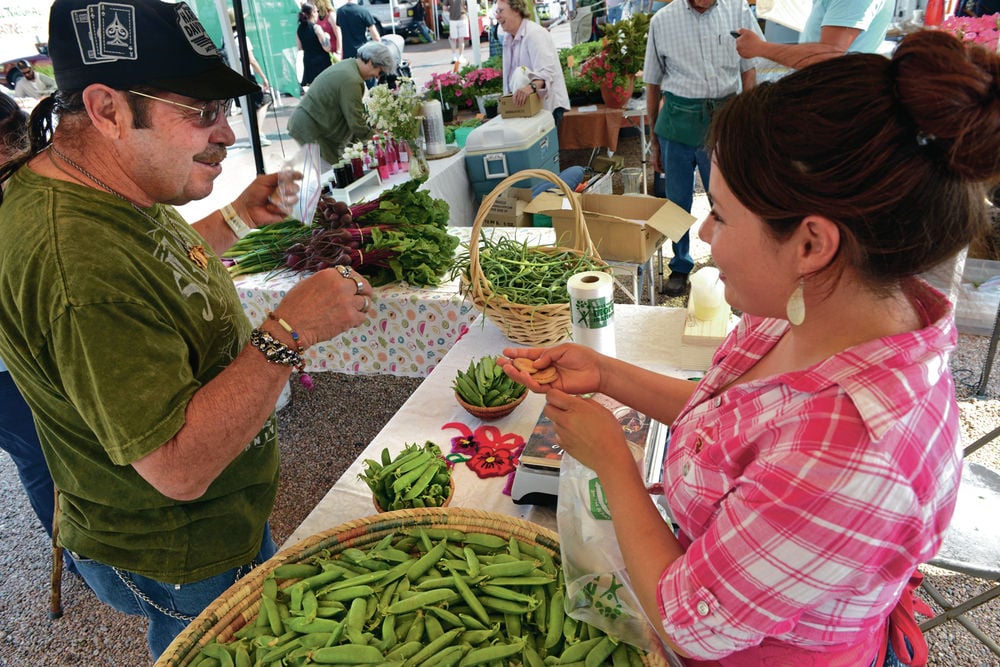 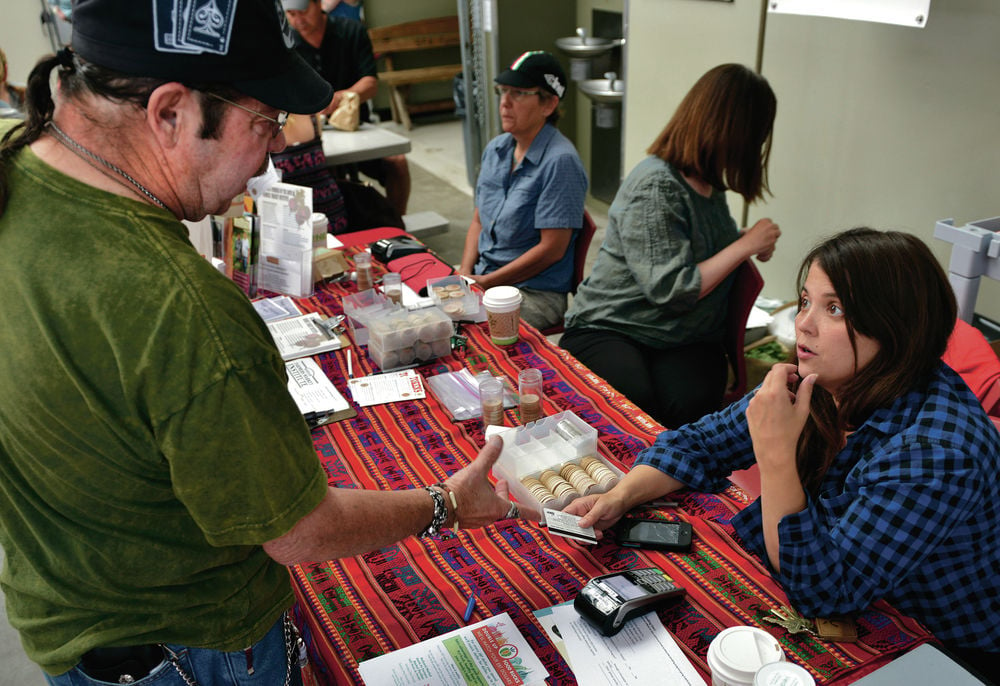 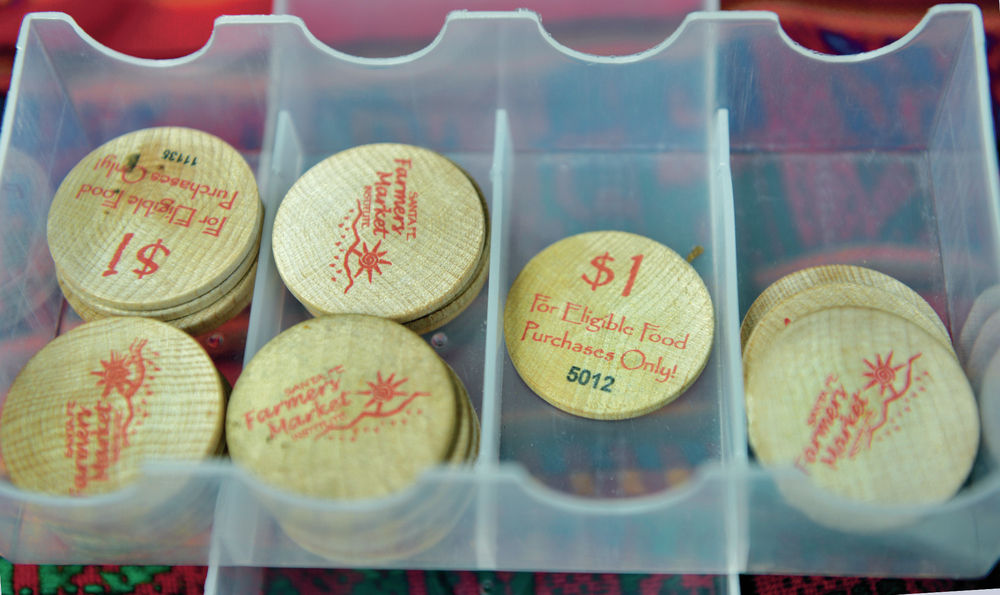 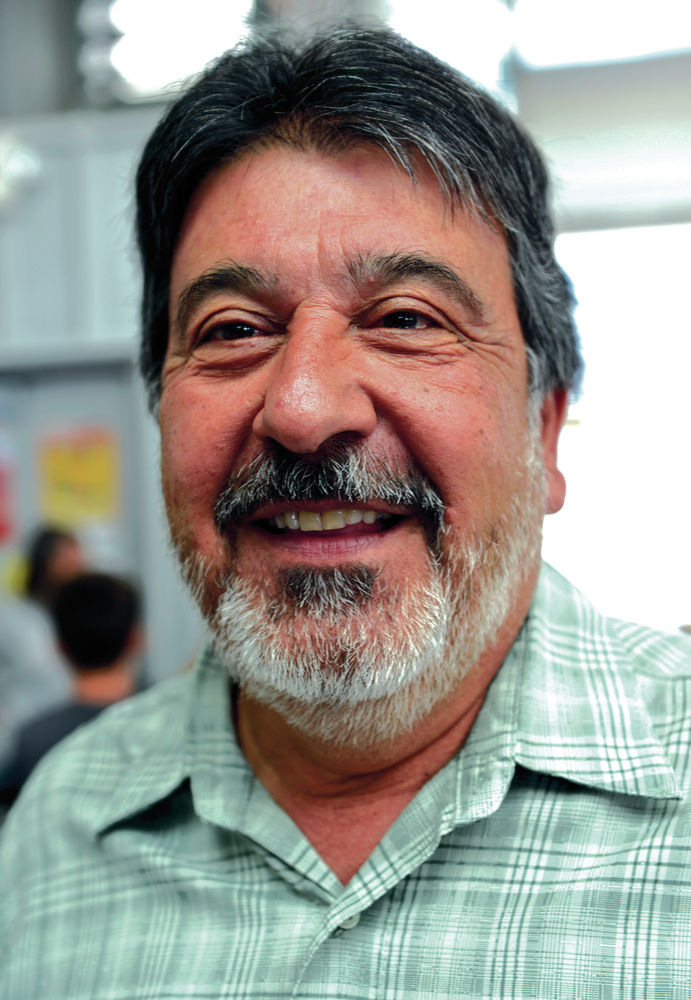 Strolling through the Santa Fe Farmers Market on Saturday with the help of a cane, Justo Quintana said he’s carefully watched his diet since a triple bypass surgery three years ago. The surgery, he said, ended his career as a security guard. Now he’s a participant in the federal Supplemental Nutrition Assistance Program, formerly known as food stamps.

Quintana used a penny-wise strategy to appease his short-term hunger in a healthy way. He walked around the market and tasted samples offered by some of the roughly 75 vendors there. “You’re not going to spend $5 on a doughnut,” he said after munching on fresh peas.

But Quintana also used another tool to save money and improve his diet. Before shopping, a market official at the information booth scanned his Electronic Benefit Transfer card for $20.

With the scan, Quintana receives $40 to spend at the market in the form of tokens.

As more and more New Mexicans enroll in SNAP, state and federal agencies are pumping taxpayer cash into a program called Double Up Food Bucks to encourage participants to spend their benefits on fresh fruits and vegetables at farmers markets across the state.

And Santa Fe’s market — as it has during the past five years — is leading the way in administering the program. This year, the market is expanding both the period during which it will be offered as well as the the amount of money it will give to participants.

The need is apparent. Terry Brunner, the state director for rural development at the U.S. Department of Agriculture, called New Mexico the “most food insecure state in the nation” — one where it’s “surprisingly difficult for people to get their hands on healthy and nutritious food.”

The New Mexico Farmers Marketing Association in April secured $99,999 in a USDA grant to help implement the program at markets across the state. It’s part of $31 million the federal agency awarded nationally. The grant money was contained in a farm bill approved by Congress in 2014.

More money flowing to farmers markets offers more stability for farmers, said Brunner, which is a priority for the agency.

“If they’re bringing goods to market, and they only sell half of what they have and the rest gets thrown away, it’s not a viable proposition for a farmer,” he said.

Fresh salad greens, frisée, parsley, French sorrel and baby carrots decorated the tables set up at Steve Jenison and Adam Mackie’s stand at the market. They picked the vegetables from their 5-acre farm, Talon de Gato, located off the banks of the Embudo River in Dixon. The two are “enthusiastically supportive” of the Double Up program, said Jenison, who noticed increased sales from SNAP customers at the market a couple of weeks ago.

The Double Up Food Bucks, given in the form of silver $2 tokens, can be used for fruits and vegetables, plants that produce foods as well as cut herbs and herb plants. Red $1 tokens given to participants are their regular SNAP allocations, which can be used to purchase any food allowed under the program. The farmers market reimburses vendors at the end of the day for the tokens.

Quintana’s fiancée, Pam Shephard, who works at Walgreens and Wendy’s, used the tokens to purchase a bunch of baby carrots at the stand. “I’m already thinking of dinner for him,” she said: A salad, mashed potatoes and perhaps chicken.

Patricia Keane, a registered dietitian at The University of New Mexico’s Prevention Research Center, points to research released by the USDA earlier this year that found while all Americans need to improve their diets, particularly when it comes to eating fruits and vegetables, SNAP participants have the lowest intake of fruits and vegetables compared to low-income individuals who don’t participate in the program, as well as compared to high-income Americans.

“You often have access to these great fruits and vegetables,” she said, “[but] you don’t really know what to do with them.”

She recommends cutting up fruits and vegetables and storing them in the refrigerator for an easy snack. Creating weekly meal plans and shopping lists can help anyone cut down on foods budgets while eating healthier, she said.

The New Mexico Farmers’ Marketing Association bid on a contract to administer another $400,000 in state money that will help fund program, said the association’s executive director, Denise Miller. The state Legislature this year allocated the money to the New Mexico Department of Agriculture. A spokeswoman said the agency will award the contract July 1. The association is meanwhile using USDA grant money to help fund the Double Up programs at farmers markets across the state, she said, including Santa Fe’s market.

Miller said the farmers market in Santa Fe has been unusual because it’s been able to raise money from the city and private sources to create “a really robust incentive program” that many of the state’s 75 farmers markets, particularly those in rural areas, cannot offer.

Sam Baca, program director of the Santa Fe Farmers Market Institute, said the market began offering the program in 2010. This year’s legislative allocation allowed the market to increase the amount of benefits customers may double from $20 to $50, he said, which allows shoppers like Quintana to spend $100 at the market if they request to use the entire amount offered.

The market expanded the program June 1, thanks to the new federal and state funding, and will be offering it all year, he added.

The program has been a boon for the market. In the first three months of the year, out of 606 transactions, customers spent $11,146 through benefits and and additional $10,445 at the market with Double Up Bucks, according to the market’s records. Baca said he expects the program to generate $200,000 in business from SNAP customers this year — double the amount spent in 2014.

Paolo Speirn, director of the market, said it’s committed to making the program more accessible to “everyone in Santa Fe.”

“We just know that the main criticism of farmers markets in general, and particularly in Santa Fe, is that they’re not accessible to working-class people,” he said.

The increased funding for the program comes just as the state saw a 21 percent jump in the caseload for the SNAP program over the year that ended in April, according to New Mexico Human Services Department data.

In total, 23.5 percent of New Mexico’s population of just over 2 million were enrolled in SNAP by the end of April, according to the data, producing $57.2 million in expenditures over the year.

The state Human Service Department’s administrative office in Santa Fe reported an 18.8 percent increase in year-over-year SNAP cases in April, for a total of 11,537 cases.

The department’s spokesman, Matt Kennicott, did not immediately explain the caseload increase.

He said in a statement that the department has provided EBT machines at no cost to farmers markets “so that SNAP recipients have access to fresh, locally grown foods.” The Double Up Food Bucks program will be available at 34 farmers markets across the state this season, he said.

“Now there’s plenty of money going around, and now we have a really good problem,” she said, “which is creating awareness of the program.”