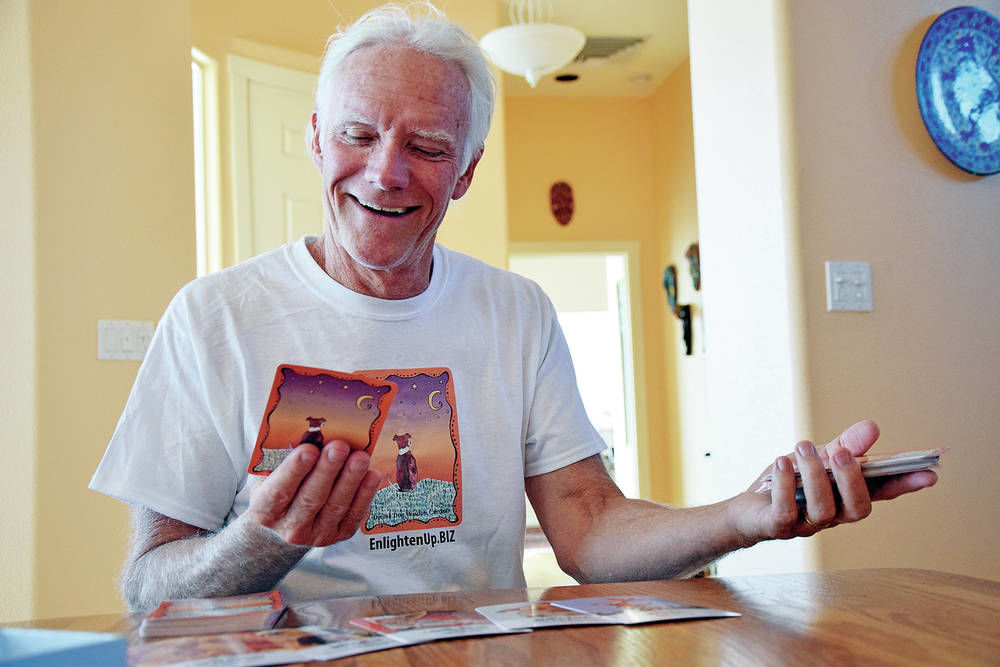 Randy Crutcher looks at the card he pulled, ‘Expression,’ after shuffling a deck of ‘oracle cards’ earlier this month. The co-creator of Divine Dog Wisdom Cards, he says he uses them as icebreakers in groups and often in his personal life as a moment of self-reflection. Elayne Lowe/The New Mexican 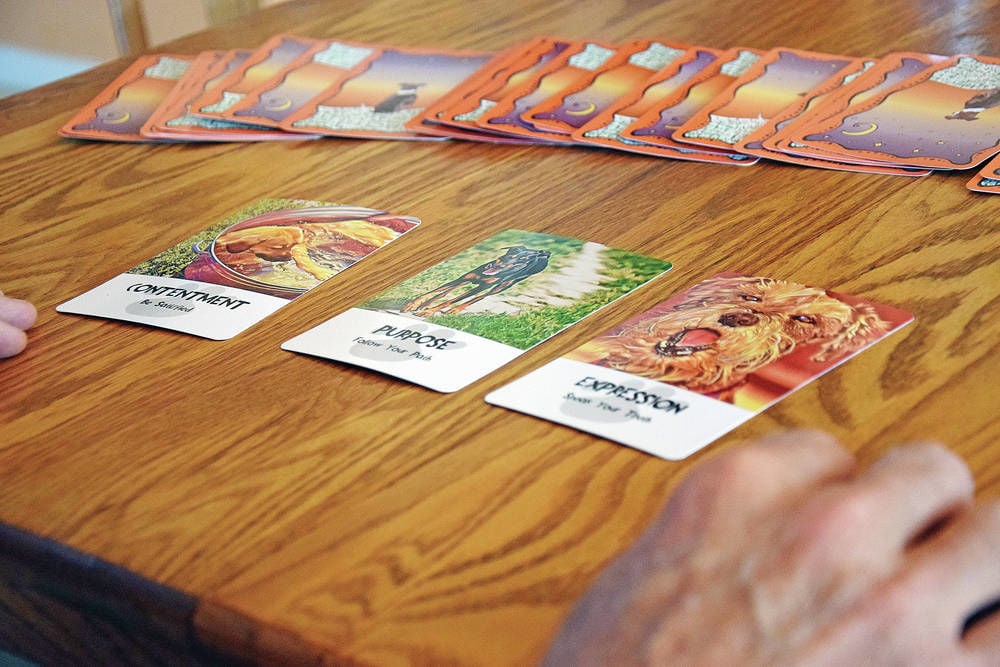 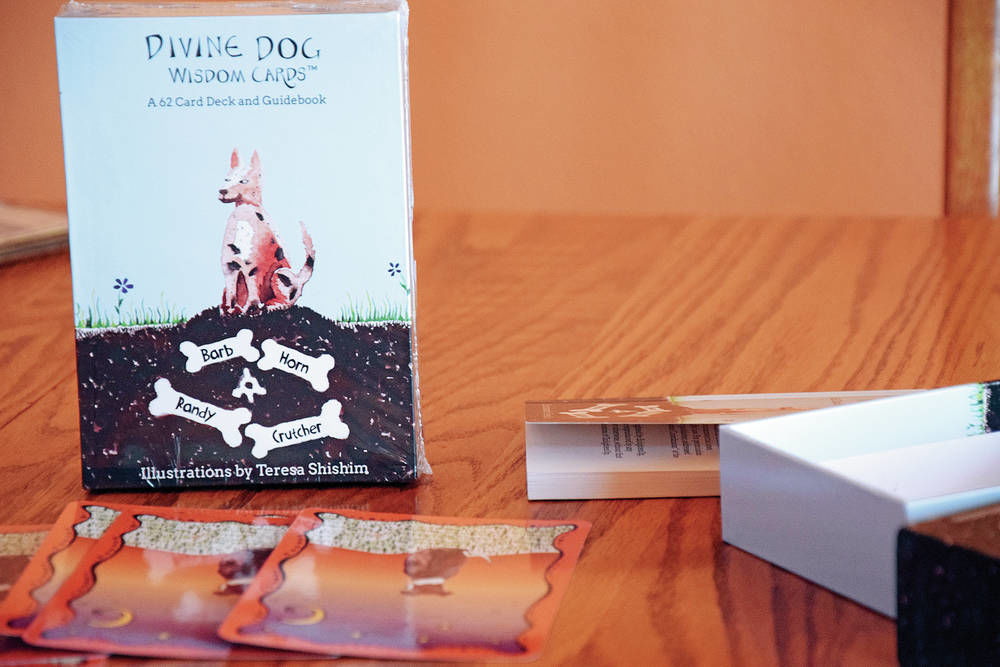 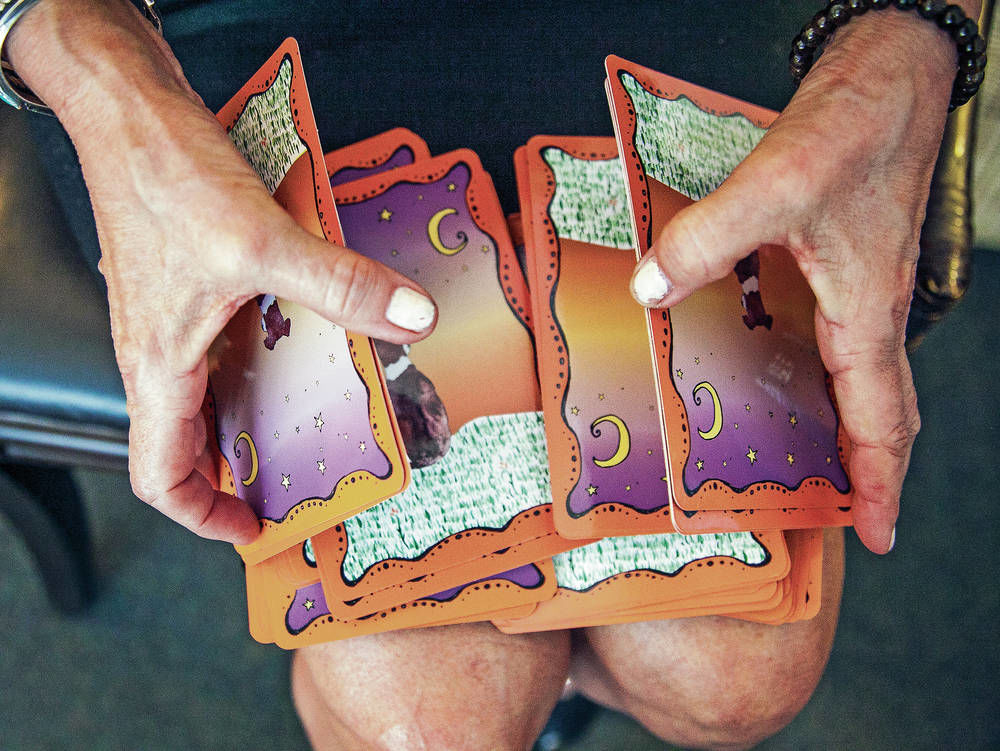 Lydia Zepeda Jennings shuffles a set of Divine Dog Wisdom Cards before handing them over to her student, Pablo Lopez Paz, to make his choice of cards in her office earlier this month. Gabriela Campos/The New Mexican 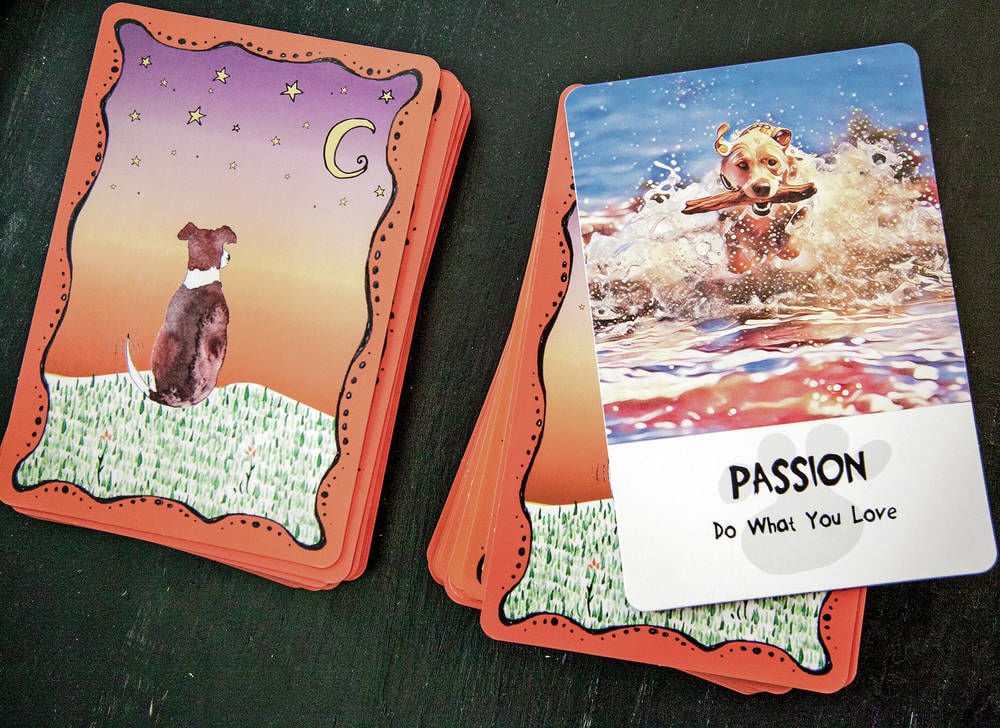 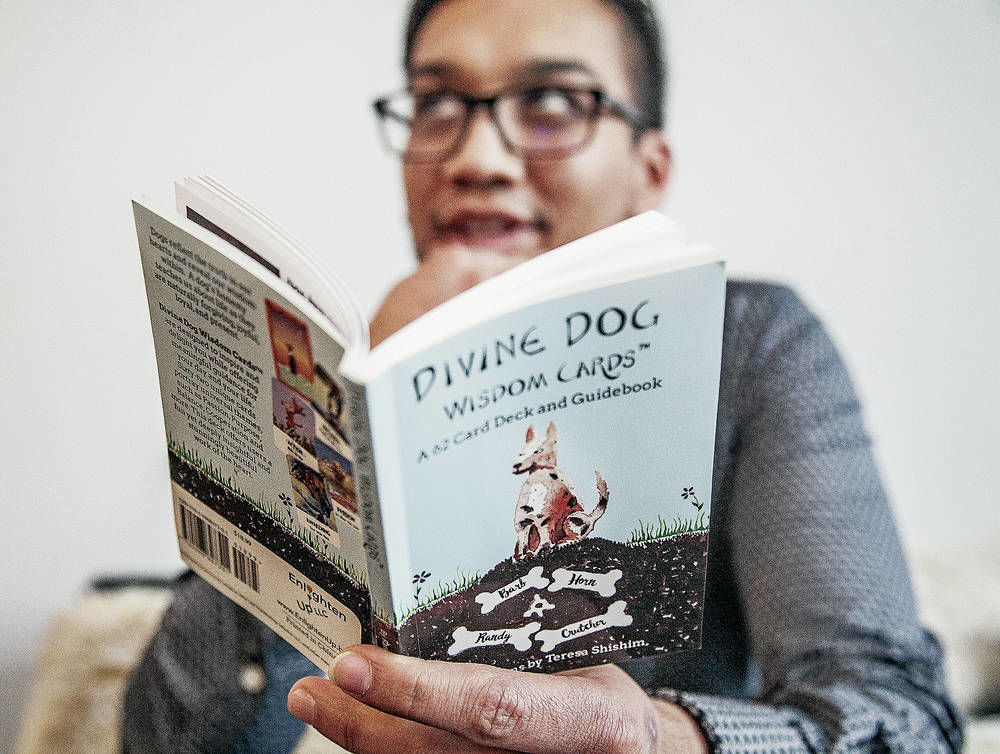 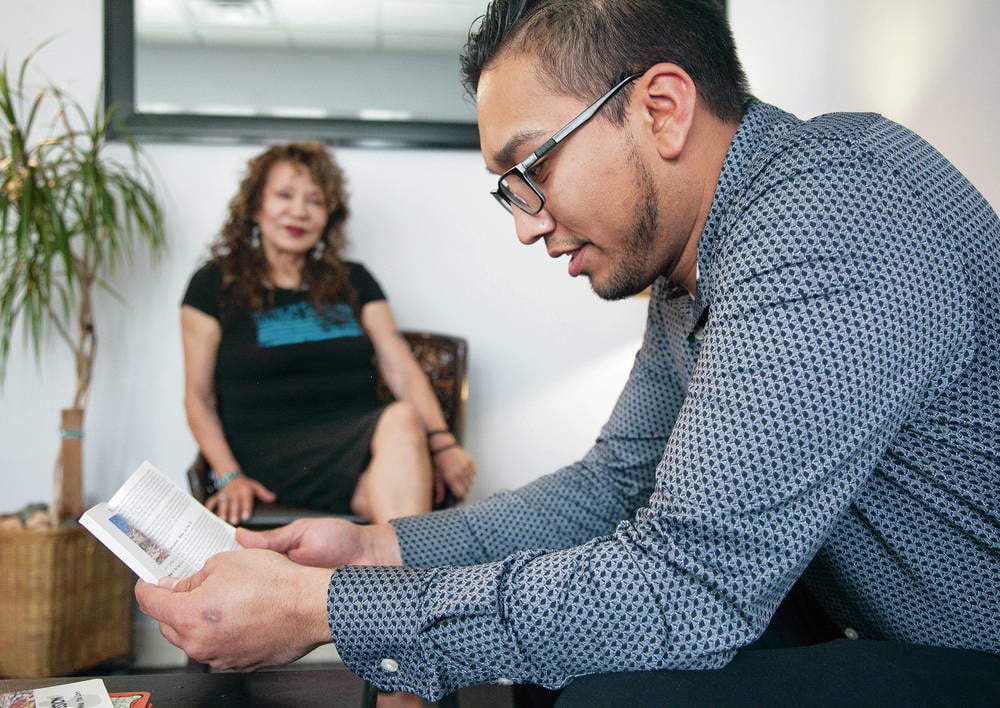 Pablo Lopez Paz reads the description of the ‘Passion’ card with councilor Lydia Zepeda Jennings. Lopez Paz is a student under Jennings and is learning about her various healing methods. Gabriela Campos/The New Mexican 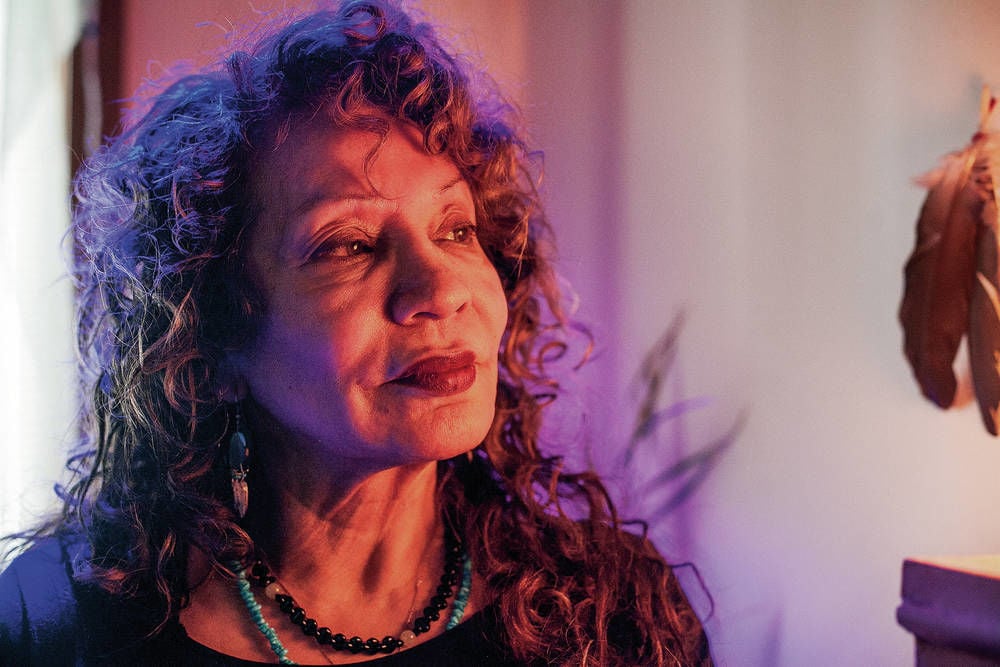 Councilor Lydia Zepeda Jennings stands in the treatment room of her office off St. Michael’s Drive. The Divine Dog Wisdom Cards are among the tools she uses in her work. Gabriela Campos/The New Mexican

Randy Crutcher looks at the card he pulled, ‘Expression,’ after shuffling a deck of ‘oracle cards’ earlier this month. The co-creator of Divine Dog Wisdom Cards, he says he uses them as icebreakers in groups and often in his personal life as a moment of self-reflection. Elayne Lowe/The New Mexican

Pablo Lopez Paz reads the description of the ‘Passion’ card with councilor Lydia Zepeda Jennings. Lopez Paz is a student under Jennings and is learning about her various healing methods. Gabriela Campos/The New Mexican

Councilor Lydia Zepeda Jennings stands in the treatment room of her office off St. Michael’s Drive. The Divine Dog Wisdom Cards are among the tools she uses in her work. Gabriela Campos/The New Mexican

Though dogs don’t talk, creators of a new type of “oracle cards” are promising dog-filled wisdom in a box if you dare to pick a card.

The concept goes like this: 62 oversized, glossy cards are fanned out face down.

As you prepare to pick one of the Divine Dog Wisdom Cards, the instructions recommend thinking of a question close to your heart or asking what you need to know for the day. On the other side of the card, a large bold-type word appears beneath an image of a dog. A phrase gives a hint to the answer but does not satisfy the question.

A longer answer lies in an accompanying booklet that offers an explanation for each word. Along with dog puns, the booklet explains what to derive from the card you picked.

The explanations are supposed to stir thoughts and give ideas for moving forward, acting as guides in a way similar to the tarot cards used in fortune-telling, designed in this case to inspire self-reflection through the lens of canine behavior.

“All of the readings give people a way to creatively work with a topic,” said Randy Crutcher, co-creator of the cards and a life coach based in Santa Fe who once worked as a therapist. He came up with the words and meanings along with Barb Horn, also a life coach and a certified hypnotherapist based in Colorado.

The longtime friends came up with the idea for the oracle cards while cross-country skiing with a group of friends and their dogs. As they watched their furry friends playing in the snow, they reflected on all they had learned through dogs and thought it would be a fun way to connect people to deeper concepts.

“It’s personal reflection and positive empowerment with the love and blessings of dogs,” Crutcher said. “We’re supporting you to love yourself even when the topics are tough.”

Both dog lovers had experience using oracle cards in their daily routines, and Horn said she has 20 different decks of oracle cards. Yet with such abundance, Horn said there was nothing on the market connecting the wisdom of dogs and human struggles.

“This is one more seed out there that helps people fall on ‘aha’ moments for themselves,” Horn said. “The best enlightening moments we all have are ones we create whether we stumble upon them or think of them, and it resonates better than when someone tells you.”

Crutcher and Horn use the cards as icebreakers in workshops or in social gatherings. Crutcher said people can believe as much or as little about spirituality, but at a minimum, he said, the cards can make people probe into a topic they may not have considered otherwise, “to put more of their conscious attention on stuff that may be going on in their unconscious mind.”

Lydia Zepeda Jennings is a family counselor in Santa Fe who sometimes uses the cards with her clients as a break in a session or segue into another topic.

“Most people are dog lovers, and they [the cards] are really good for people with a lot of defenses,” Jennings said. “It helps break people in.”

While answers that come with the cards are vague, Jennings said, “They’re very clever because they cover psychological issues in a very playful way. I’ve not had a negative experience.”

Crutcher said he has heard of teachers and school counselors using them with students.

Horn described the cards as an interruption, one that allows people to come in contact with something they may not have realized otherwise.

The deck is sold in a few local stores, including Ark Books on Romero Street and Teca Tu in the DeVargas Center, and can be purchased online at Amazon.com.

NEW EPISODE What is the role of Congress in determining foreign policy? What does Congress have to say about water policy, given that states play a large role in determining their own water law? And how does New Mexico transition away from its dependence on the fossil fuel industry?