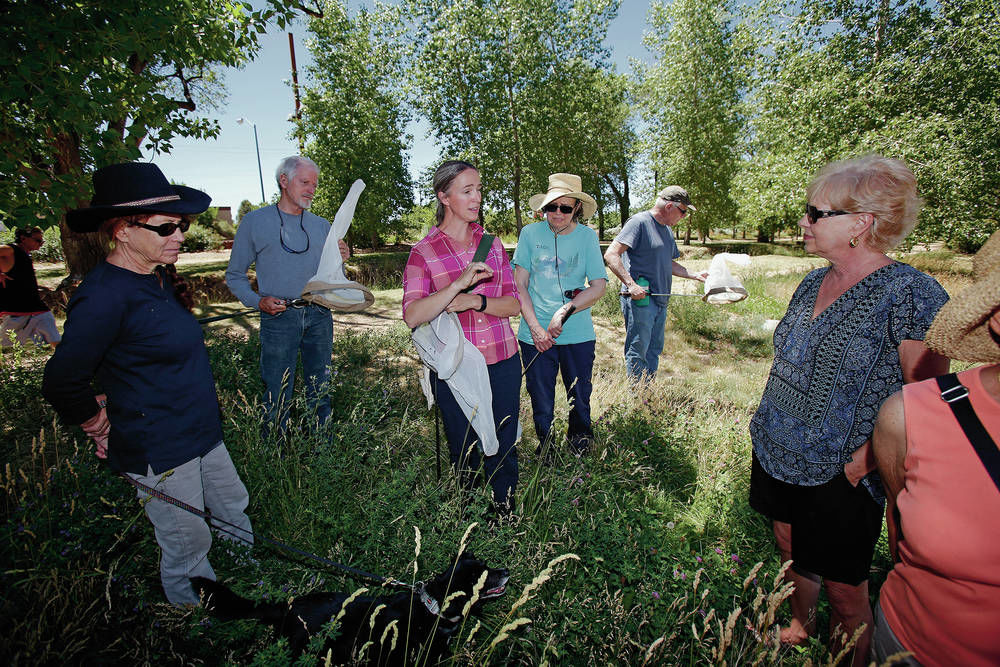 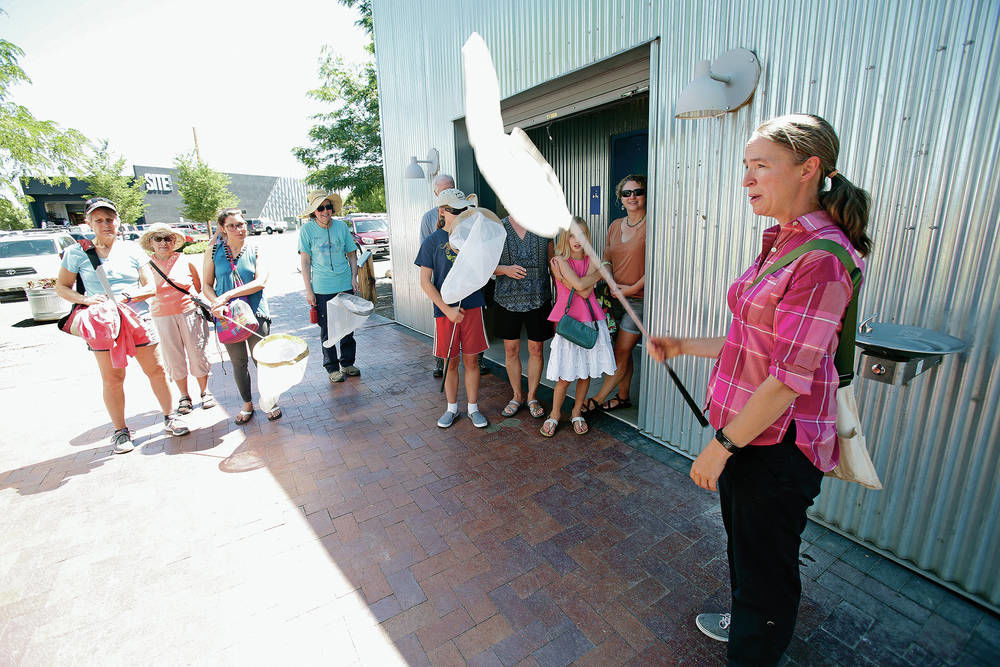 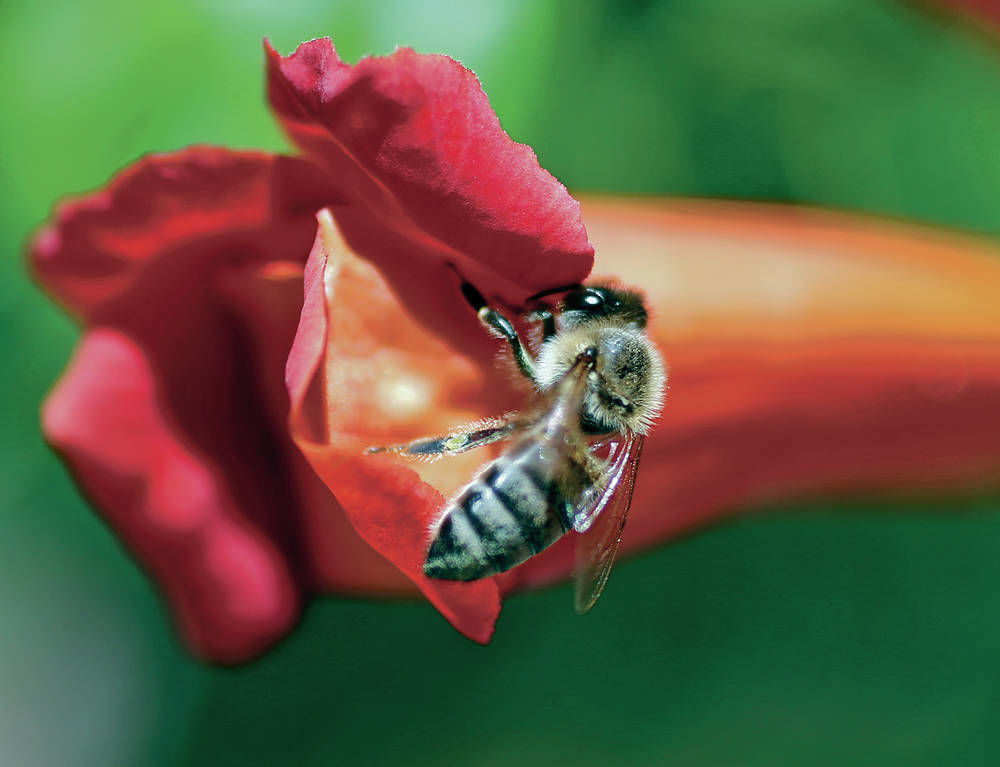 Bee expert Olivia Carril says that out of 4,000 species living in the U.S., New Mexico is home to about 1,100 identified types, including this honeybee spotted Tuesday at Railyard Park. Luis Sánchez Saturno/The New Mexican 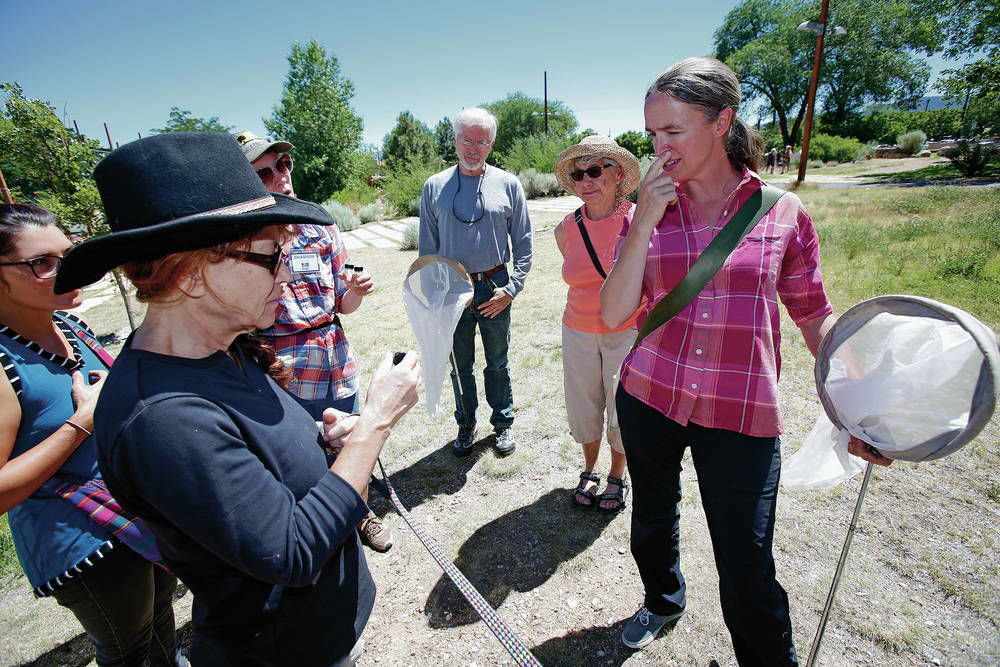 Bee expert Olivia Carril says that out of 4,000 species living in the U.S., New Mexico is home to about 1,100 identified types, including this honeybee spotted Tuesday at Railyard Park. Luis Sánchez Saturno/The New Mexican

A dozen people armed with large nets prowled through Railyard Park, their eyes scanning the ground as they prepared to swoop their nets through the tall wildflowers.

Like adventurers in a new jungle, the group trod slowly, looking for creatures most people avoid: bees.

A cry of victory rang out as one bee hunter held a net by its end and squeezed off the opening. Others gathered around as Olivia Carriltook the net and dipped a vial into its stiff cloth. When she pulled it out, a tiny flurry inside clinked around the glass.

After a close examination, Carril announced the name of the bee species she held. From leafcutting to sweat to mason to mining, she helped the amateur group identify 10 species of bees in just one corner of the park during Tuesday’s 45-minute workshop.

“These are all in your yards, too,” Carril told the participants as the session ended. “Just look around.”

The Railyard Park Conservancy, a nonprofit organization that serves as the park’s caretaker, raising funds, recruiting volunteers and offering programs, hosted the free native bee workshop. It brought in Carril, a native bee expert, or melittologist, to talk about the insects and address some misconceptions.

“She kind of helped clarify some of the media hype,” said Sarah Jacobson, who attended the workshop.

Jacobson, who recently started keeping honeybees, said talking with Carril gave her a much wider understanding of the insects.

“It helps identify some of what I’ve seen,” she said.

Out of 4,000 bee species living in the U.S., New Mexico is home to about 1,100 identified species, or 28 percent, according to Carril’s data. Still, the bee expert said, much remains unknown about bees and the populations in New Mexico.

“So few studies have been done in New Mexico,” Carril said. “There’s a lot of work to be done here and discoveries to be made.”

Current research includes monthly bee studies at the Sevilleta National Wildlife Refuge, Carril’s own work at Bandelier National Monument and a study at the Rio Grande del Norte National Monument. But data on bees in much of the state are unavailable. And the effects of long-term climate conditions, such as the current drought in New Mexico, haven’t been fully be evaluated, she said.

Ultimately, Carril said, there will be winners and losers as different species thrive or struggle from climate and habitat changes.

“Think hummingbirds and eagles,” she said. “There’s a lot of variation.”

What is known, however, is that most people have the wrong idea about the pollinators.

“There’s this lack of awareness of how many bee species there are in the U.S,” Carril said. “People know bees are important, but they don’t know what they look like or how many there are.”

At the start of Tuesday’s workshop, Carril displayed images of insects and asked the participants to raise their hands when they thought a photo depicted a bee. Hands confidently went up at the familiar sight of bumblebees and honeybees, but confusion arose over images that turned out to be wasps or flies or bee varieties rarely seen.

“There’s a lot of diversity in the form,” she said.

Nine-year-old Maisie Auer, who attended the workshop with her family, said Carril’s lesson made her see bees differently.

Carril has been studying bees for about 20 years and co-authored the book The Bees in Your Backyard, attempting to give people a field guide similar to those on birds or fish in an area.

The field, however, is still changing and adapting.

“We are finding new species all the time,” Carril said.

Most people think in terms of honeybees, Carril said, picturing a queen and a hive, while most bees are solitary creatures.

Females burrow into the ground or find abandoned hollows, such as in trees or rocks, while males linger near flowers waiting to mate. Carril told the group to watch for several bee nests in an area because bees that don’t live in a single structure, like a hive, still tend to group — “just like how we live in cities but have our own home,” she said.

Carril said native species that burrow or nest are particularly vulnerable to habitat loss. If a prairie with wildflowers is flattened for a cornfield or a parking lot, bees in the area lose their home and food source.

“There’s no doubt there has been habitat modification that has altered populations,” she said.

Trying to help one species, such as raising honeybees, can hurt other native species, she said, because the honeybees often outcompete others for food.

“To put a chicken in my backyard doesn’t do anything for eagles,” Carril said. “Same thing with bees.”

While honeybees are big attention-grabbers and are popular for the honey they produce, people should care about all bees, Carril said. “The pure joy and beauty of the bee should be enough.”

In the end, she said, quoting Winnie the Pooh, “You never can tell about bees.”

• The difference between bees and flies: Bees have four wings instead of two, eyes that are more separated and longer antennae.

• Bees are “specialized wasps” that broke away from their meat-eating counterparts about 100 million years ago, turning to pollen and nectar. Distinguishing between bees and wasps is harder, but metallic faces or flying in a more predatory behavior near the ground typically indicates a wasp.

• Only females have stingers, and they only sting when squished, bee expert Olivia Carril says. Over the past year, she was stung three times while collecting about 3,000 bees.

• Females have the ability to decide the sex of their eggs.

• To observe bees in your backyard, Carril recommends starting to look at a distance before slowly approaching the plant or area. Avoid casting your shadow across the plant as you watch.

• The easiest plant for viewing bees is a sunflower.

• If you have questions about identifying bees in your backyard, you can send a photo to beesinyourbackyard@gmail.com and Carril will try to solve the puzzle.