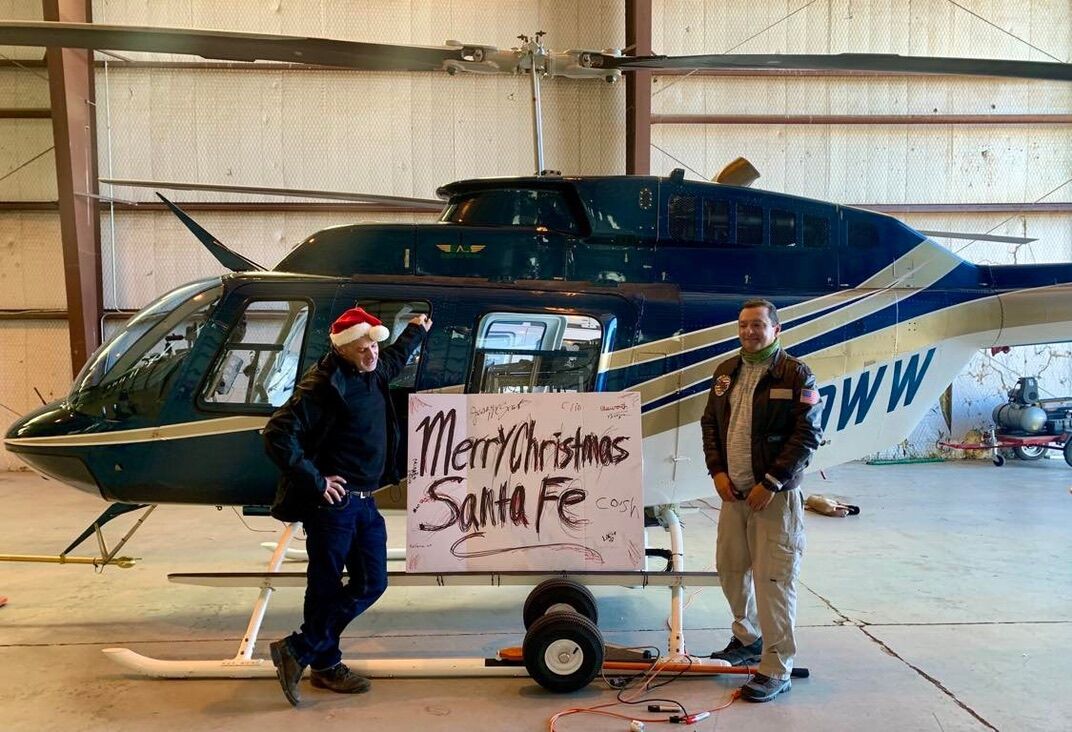 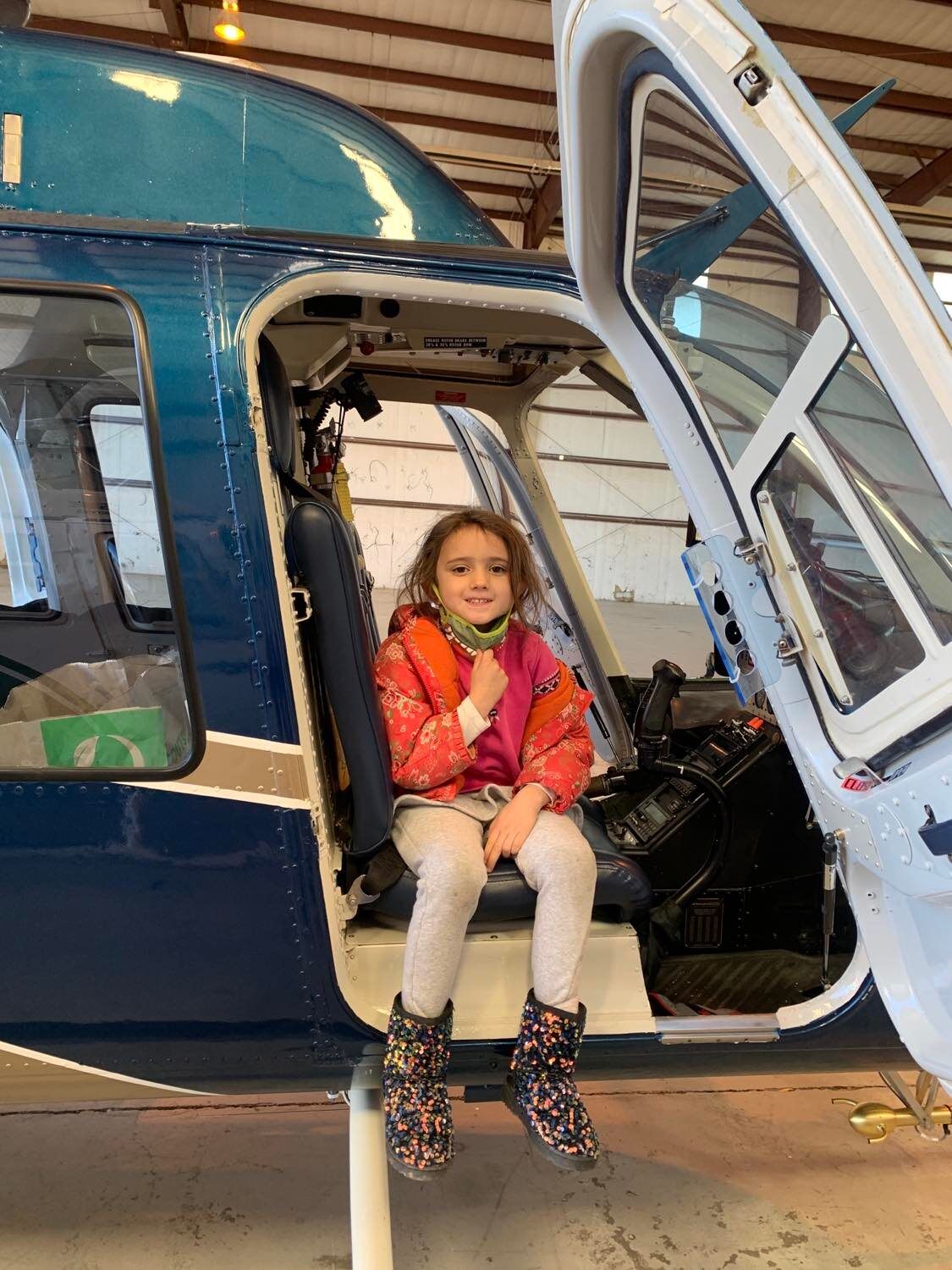 Claiborne Huling, 5, sits in a Bell Longranger 4 at the Santa Fe Regional Airport. The helicopter is suited for higher elevations.

Claiborne Huling, 5, sits in a Bell Longranger 4 at the Santa Fe Regional Airport. The helicopter is suited for higher elevations.

There was a buzz in my house during the month of December.

Yes, the holidays were upon us, but this buzz didn’t feel good. It was grating, like a fly that needed swatting.

It lingered for hours over the course of a few days, in fact, circling 300 feet above my house.

And I was not alone in feeling this annoyance. Much of Santa Fe was subjected to a low-flying helicopter circling neighborhoods seven days a week. Public Service Company of New Mexico, the state’s largest electric utility, had hired a firm to conduct aerial inspections of its power lines due to concerns over fire dangers brought on by severe drought and the La Niña climate pattern.

Given the amount of complaints to 911 (30 to 40 a day) and on several online forums, it appeared many people, including myself, had missed the November announcement about the operation.

The day the helicopter appeared above my neighborhood, I thought it was picking up the governor at the governor’s mansion. But it never landed.

Informed or not, residents were growing tired of the endless noise overhead. I went down the social media rabbit hole to read the complaints and theories about the source of this intrusive presence. The Santa Fe Bulletin Board, a local Facebook forum where residents ask for recommendations on coyote fence builders or share concerns about city growth and development, was filled with comments on the chopper.

In addition to dozens of questions about the aircraft, the page was filled with hilarious memes: helicopters pulling Santa’s sleigh, T-shirt ads for Helicopter Fiesta and betting odds for how many posts would appear that day on the topic.

Fast-forward a week, and I happened upon a social media post inviting families to come down to the Santa Fe Regional Airport to tour a helicopter. I reread it and quickly realized this person was affiliated with the crew tormenting us for days on end.

I RSVP’d right away. Being an aviation buff, I had a feeling this would be a fun and memorable way to start the winter break.

The next day, my family and I were headed to the airport. After parking, we wandered in front of the terminal, not knowing who or what to look for. We were approached by a friendly Jesse McGrath, an airborne systems operator for GeoDigital, who asked if we were there for the tour.

Wearing a Santa hat, he was very hospitable and led us into one of the private jet centers while he waited for others to arrive. We met about five other families who happened to see the Facebook post, like I did.

McGrath was amused by all the Facebook hoopla over the helicopter, including “the comments and curiousness about why we were there.”

“Every time I went out to dinner or a beer, there would be a conversation about it, and I found everyone to be pretty understanding and amused after meeting me” or pilot Jean Paul Robinson, McGrath said.

We caravanned to an enormous hangar that housed small propeller planes and two helicopters. We were greeted by pilot Robinson, who was every bit the part with his quintessential brown leather bomber jacket. They offered a bucket of candy and had a large poster board for all the children to sign.

Kids were able to sit in the cockpit, try on the helmet and learn about the remarkable skills required for flying a helicopter. We saw the cameras and equipment used to record their many routes, zooming in on our house on the monitor (cue the conspiracy theorists). This is the type of work they perform all over the country.

They explained they both sit on the right side of the aircraft during flights, Robinson forward and McGrath aft, which explained their clockwise circling as they tried to capture images of the power lines — and when they missed a shot, they circled again and again.

Robinson, a native of Pennsylvania, earned his pilot’s license in high school and went on to study aviation management in Florida, earning more pilot credentials.

While speaking with McGrath, who calls Maine home, we learned he had recently lived in my hometown of Chittenden, Vt., population 1,200.

In all his years of working on location, he said, he had never joined a local Facebook group. He was falling in love with Santa Fe and, prompted by the complaints, genuinely felt bad for the disruption. He and Robinson even tried to steer clear of the Roundhouse during December’s special legislative session, they said.

When I saw an uplifting post saying, “I feel like the helicopter posts are bringing the community together for a good laugh,” I had to agree.

As we enter the third year of limited community gatherings due to COVID-19, it felt good to have something to chuckle about with my fellow citizens. And it felt good to safely gather with a group, whom I had never met, in this organic way.

The guys creating all that buzz were human beings with genuine care about their impact on Santa Fe. It was an important message that behind every mask — or helmet — is an individual with good intentions whom we likely have something in common with.

In the spirit of starting the year with a Hallmark movie ending, I’m reminded when engaging with the face-masked, understaffed and overstretched to look people in the eye with kindness and as members of community. And, of course, to keep looking up.

Bizia Greene is an etiquette expert who owns the Etiquette School of Santa Fe. Share your comments and conundrums at hello@etiquettesantafe.com or 505-988-2070.

Nice piece, a feel-good story. Timely too, given the hubbub on social media about the helicopter activity

Note: would have posted this much earlier, but website wasn't accepting posts to this column, something that has happened before

An uplifting story with a good message!!