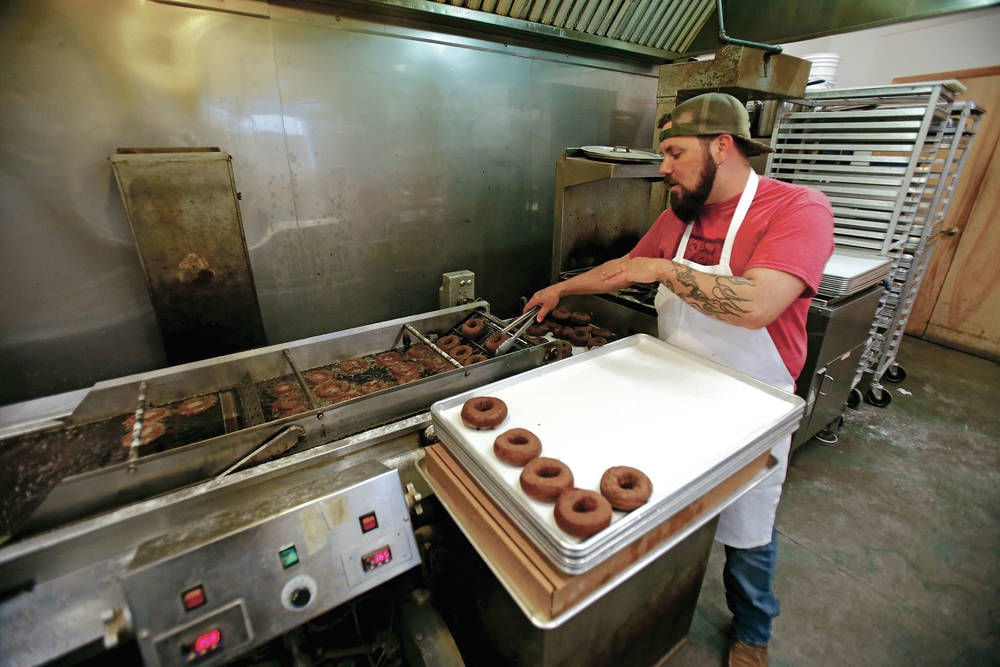 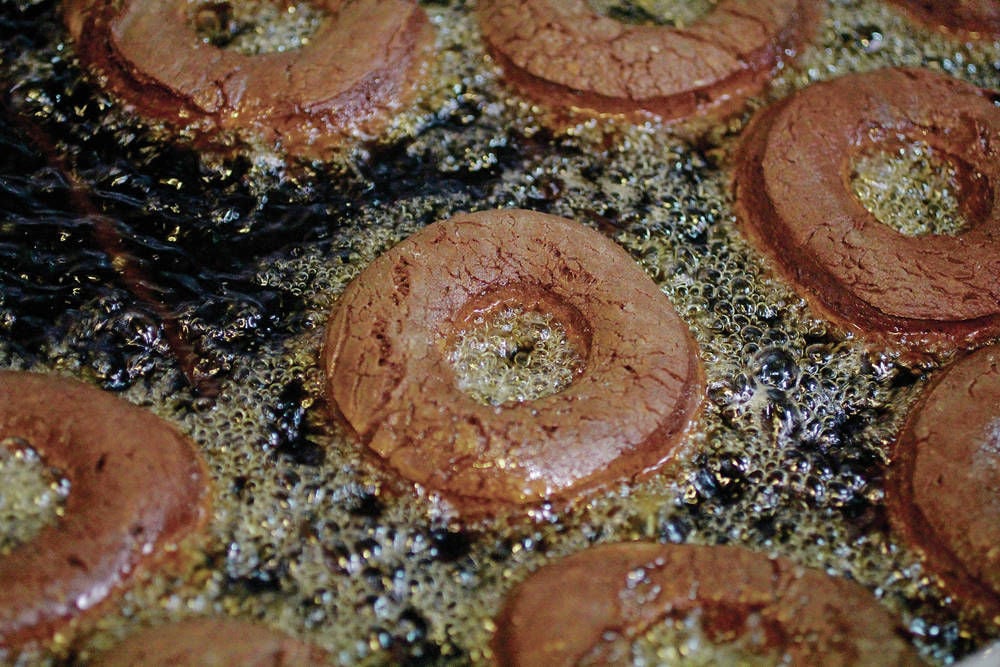 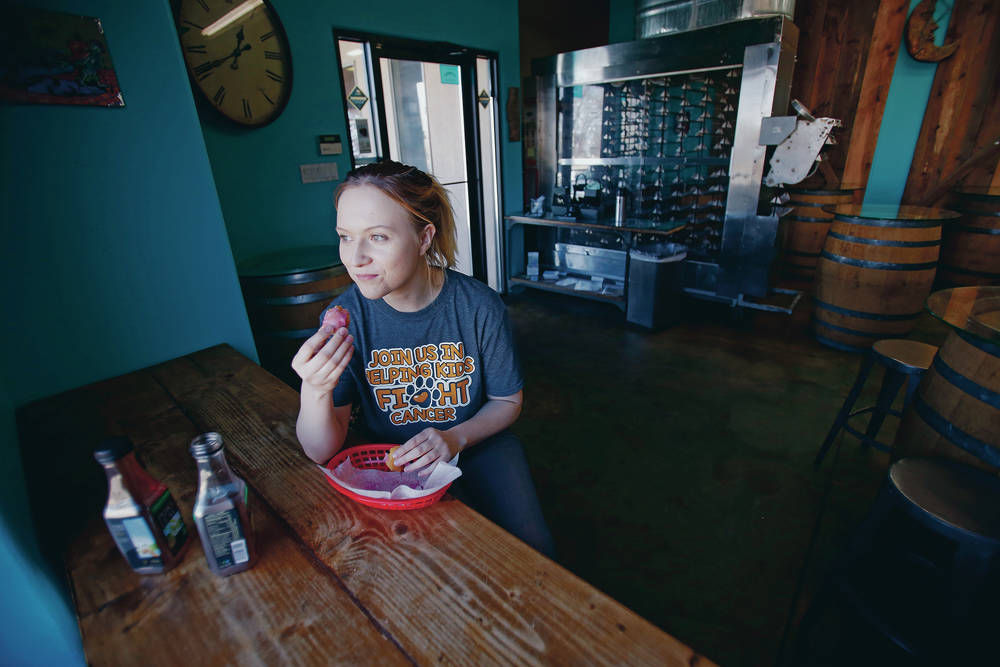 Sarah Raup, from Santa Fe, takes her lunch break at Whoo’s Donuts on Friday, March 10, 2017. “They are the best doughnuts I’ve ever had.” Said Raup. “Not too sweet, they’re just right.” Luis Sánchez Saturno/The New Mexican 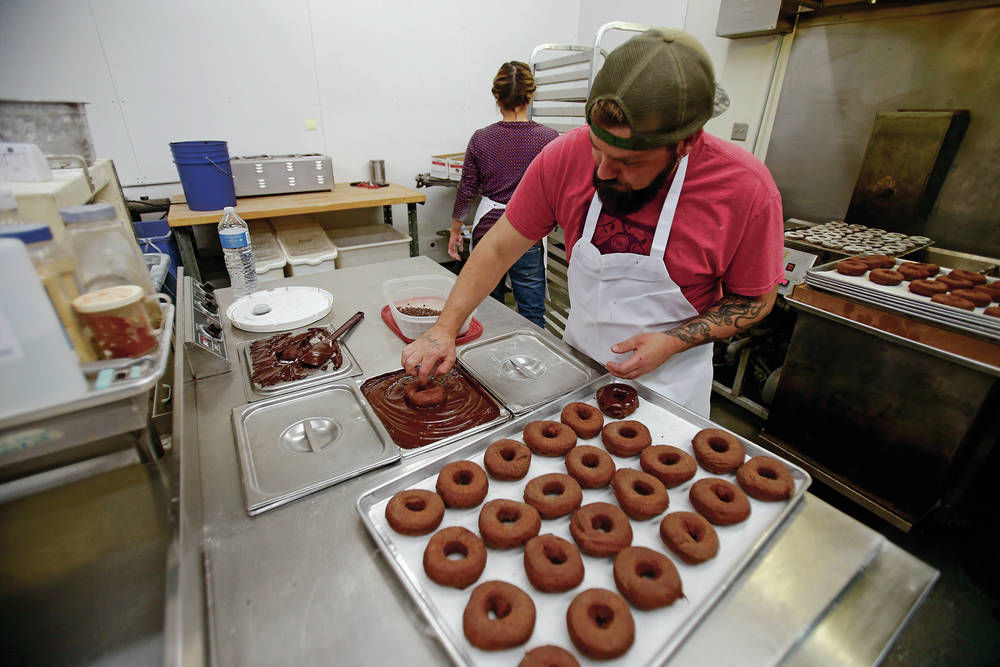 Sarah Raup, from Santa Fe, takes her lunch break at Whoo’s Donuts on Friday, March 10, 2017. “They are the best doughnuts I’ve ever had.” Said Raup. “Not too sweet, they’re just right.” Luis Sánchez Saturno/The New Mexican

Ryan Lampro had just emptied two batches of various kinds of berries into two metal containers and was preparing to soak them in lemon juice before blending them with sugar as the filling for Whoo’s Donuts’ mixed berry blue corn doughnuts.

“I had lost some weight, but then started to eat the doughnuts again and I gained 30 pounds,” said Lampro, brother to Kari Keenan, who with her husband, Jeff, owns Whoo’s at 851B Cerrillos Road, just east of St. Francis Drive.

The Keenans, also owners of the ChocolateSmith next door, opened the doughnut shop in 2011 when a beauty salon moved out of the adjoining space.

The idea for a doughnut bakery popped into Kari’s head when the couple were on their way to the Albuquerque balloon fiesta and stopped at Kips Donuts for a couple of for-the-road goodies, only to find it had closed.

“I realized then that there were no home-baked doughnut shops in Santa Fe, and told Jeff that somebody ought to open one,” Kari Keenan said. “I didn’t know at the time it was going to be us.”

Unbeknownst to her, Jeff happened to notice that Kips was selling its bakery equipment — so he bought it all.

“Kari was a little upset at me for awhile,” Jeff Keenan said.

Cathy Barbash, loading up on a to-go order including her favorites, the blue corn blueberry lavender and the biscochitos with cinnamon and sugar, laments that she only gets to Whoo’s maybe a couple times a year during ski trips here from the Berkshires.

“Whenever we get down to Santa Fe, we come in here,” she said. “In addition to the doughnuts being awesome — and the coffee’s not bad, either — I like the indie vibe. It’s totally unpretentious. Especially in Santa Fe, with the changes we’ve seen since the early ’80s, it’s great to see an independent, unaffiliated company — especially one whose products are so fabulous.” Barbash said the shop sends her discount coupons, but “it just kills me because I won’t be back for another year.”

Shuangyi Li is a much more frequent customer — a regular, she said. “I try to keep to just a couple of times a week,” Li said, “but it’s not so easy.”

Li had just picked out one of the blue corn blueberry lavender doughnuts for herself and a white chocolate lemon pistachio for her boyfriend. “I just like the doughnuts here better than [other places] because of all the different flavors instead of just having [all sugary] puffy doughnuts.”

One of her many favorites, Li said, is the red chile chocolate with bacon bits. “It’s very New Mexican.”

It can be very difficult to pick a favorite among the more the two dozen varieties, not including the seasonal delights for the holidays — for example, chocolate peppermint crunch for Christmas and pumpkin cream for the fall.

The shop’s latest venture since 2012 is a contract with Whole Foods to spread the sweetness across the grocery chain’s stores in five states: Utah, Colorado, Idaho, northern Texas and Kansas. Whole Foods was in the Keenans’ sights when they first opened, but it took a while to close the deal with the natural foods giant.

“When we originally opened, we were going to make a gourmet, fresh-from-scratch doughnut,” Kari Keenan said, “and we wanted it to be clean, so no artificial ingredients or flavors … all just good, high-quality ingredients, the kind I would like to serve my kids when they want a doughnut.”

She said, “We did that with the intention of selling to Whole Foods, knowing that Santa Fe is a small town and you have to be able to do wholesale to stay afloat. So we fashioned our doughnuts knowing they had to be fit for that store. And they have pretty strict [rules] regarding what ingredients can be used.”

Kari Keenan said they received $25,000 in financial help from a Whole Foods local producer program and a $100,000 loan from the U.S. Small Business Administration.

Jeff Keenan said it still feels good when he gets a call from a friend saying, “I just bought one of your doughnuts in Salt Lake City.”

In the near future, Whoo’s plans to add several new flavors, including a carrot cake with lime glaze, Chantilly cream cake and a New Mexico chocolate cream.

Kari Keenan said customers occasionally suggest flavor ideas, but they generally are thought up by somebody in the family or their four employees.

“I have a pretty good sense of what flavors work together, and we do a test batch … if we like them, we stick with them — a lot of trial and error.” She said the cake doughnuts lend themselves to myriad combinations of flavors, given the cake itself as well as frosting and sprinkle possibilities.

But the most enticing addition might well be the much-anticipated doughnut ice cream sundaes, made with the help of La Lecheria ice cream makers.

Where: 851B Cerrillos Road